‘Luca’ Is Low-Stakes, Luscious, and Loving 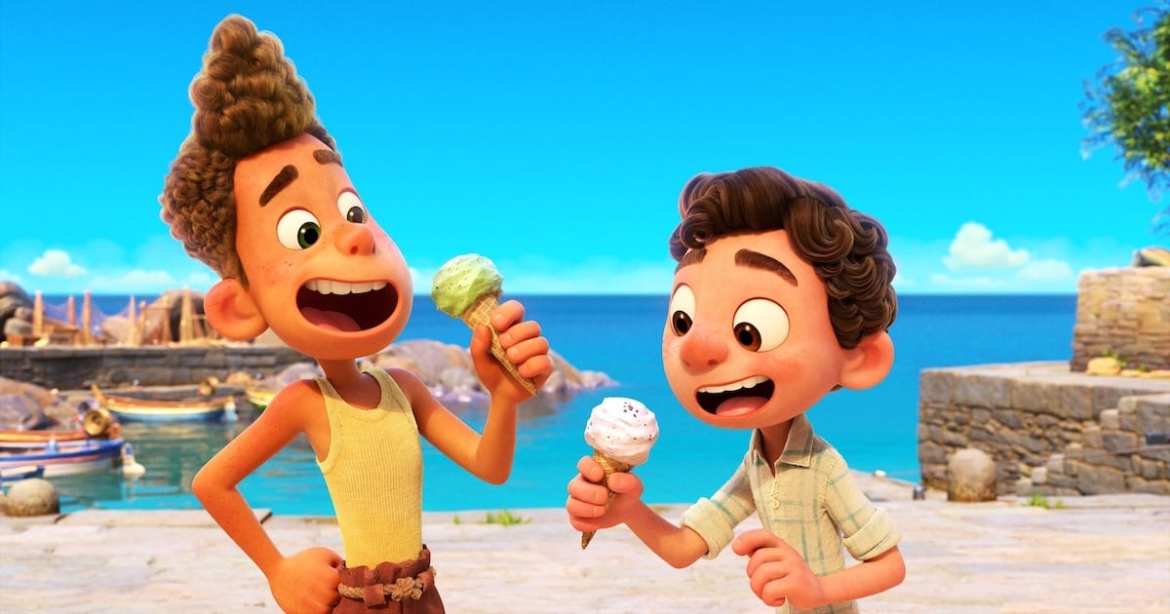 Crystal blue water, golden hour sunshine, delicious pasta, and plenty more lovely vibes. While watching Luca, you may come to forget it comes from the same company that made three Cars movies. It probably won’t pay the bills the same way Mater toys do, but man, can Pixar make a few more like this???

Getting Their Surface Legs

Not much happens in Luca‘s first thirty minutes. Sea monster and title character Luca (Jacob Tremblay) grows more curious of the surface world by the day, and finally steps onto the surface near the small Italian village Portorosso thanks to Alberto’s (Jack Dylan Grazer) nudging. Luca learns that his kind takes on human form out of the water when dry and reverts to sea monster form again after getting wet.

All of this experimentation is much to the chagrin of Luca’s parents, of course. They just want Luca to stay safe in their quiet underwater village. (Don’t look now, but Maya Rudolph is quickly etching her place on the Mount Rushmore of Sweet but Overbearing Moms in Animated Movies.) From there, the two just sort of hang, roaming the outskirts of the town while jumping into the sea and forming plans to acquire their very own Vespa so they can ride away and be free.

And it’s all wonderful.

Most mainstream animated movies have frantic, borderline nausea-inducing pacing with enough cotton candy colors flying around the screen to make your eyes bleed. (I’ve sat through two too many Trolls movies.) No doubt a move meant to maintain the attention of younger viewers. Rarely does one relax, however. It’s that calming sensation that differs Luca from the rest of Pixar’s output — and its queer-coded lead characters, but we’ll get to that in a second.

The rest of the film has more familiar animated trappings — the cocky bully, the race for the coveted prize, the quirky sidekick — but that soothing, exploratory sensibility created at the beginning truly permeates the more plotty bits that come after. Unlike so many animated movies — and many Pixar offerings too — Luca always has time to breathe. So much so that many might mistakenly discount it as unremarkable. Luca is a true coming-of-age story. Not one where a kid has to grow up and save the world; instead, a kid gets to join the world and explore all it has to offer while also exploring his own identity.

After parading around the countryside, Luca and Alberto head into town, where they attempt to blend in with the townsfolk and continue their aims of getting their very own Vespa. This goal pits them against Ercole Visconti, the older bully who beats up on younger kids and takes home the Portorosso Triathalon Cup every year. (Look out for when Ercole rides his bike and his butt sways vigorously from side to side — it’s good for a major laugh every time.) But, with the help of Guilia (Emma Berman) and a lot of training, they can win the prize money and begin their journey.

There’s a constant fear they may be found out: Portorosso is staunchly anti-sea monster. Guilia’s dad Massimo (Marco Barricelli) is a hulking fisherman who is actively hunting sea monsters. Her cat Machiavelli (hilarious) is on to them too. With this fear of being “found out” at the forefront of Luca — with the main characters concealing their true identities — it’s a little odd that director Enrico Casarosa has pushed back against the idea of Luca being an LGBTQ story, but the subtext is clearly there, even if Luca and Alberto’s relationship isn’t romantic. There are far too many parallels for them to be purely coincidental. Beyond the fact that Luca and Alberto are hiding who they truly are in fear of persecution, themes of self-denial and finding an accepting community are constantly interrogated.

To be fair to Casarosa, he’s stated how he views Luca and Alberto’s friendship as transformative, the kind that will “push you into finding yourself.” Which is definitely true, but the same can absolutely apply to queer characters. Sure, Luca and Alberto’s relationship isn’t romantic — and it doesn’t need to be — but they might look back on it later in life as a bond that gave them the perspective they needed to figure themselves out if we were to catch up with them years down the road. (I’m absolutely here for multiple sequels with both Luca and Alberto at different stages in their lives.)

Luca is quickly becoming a favorite Pixar character of mine thanks to the depth mentioned above and the amazing voice work from Jacob Tremblay. Yeah, I would die for this kid.

Can Every Movie Take Place on the Italian Riviera?

It goes without saying that Pixar continues to improve its technical craft. Some of the imagery here is breathtaking. And the pasta looks delicious. Curious quotes aside, Casarosa clearly put a lot of love into this film and created something special. Dan Romer’s score is a major ingredient as well. The staccato, playful rhythms are bound to revive dormant summer memories and take you back to the time in your life when nothing and everything was happening with your childhood friends.

Did I mention this movie is also really, really funny? Sacha Baron Cohen pops in and lends his voice to a 90-second scene that had me howling.

This is the kind of movie I wish I had in my formative years. One that guides you through all these new and sometimes frightening feelings you have without ever having too tight of a grip. Most importantly, it’s wholly life-affirming. Because whatever path Luca chooses down the road, the most beautiful thing about it is that it’s his choice to make.

Thank you for reading! What are your thoughts on Luca? Comment down below!

I watched this with my nephew expecting just a B-rate little animated movie but I was surprised how much I liked it!

I stan this movie so hard!!!