‘Bill and Ted Face the Music’ is Proof the World Isn’t Such a Bad Place After All! 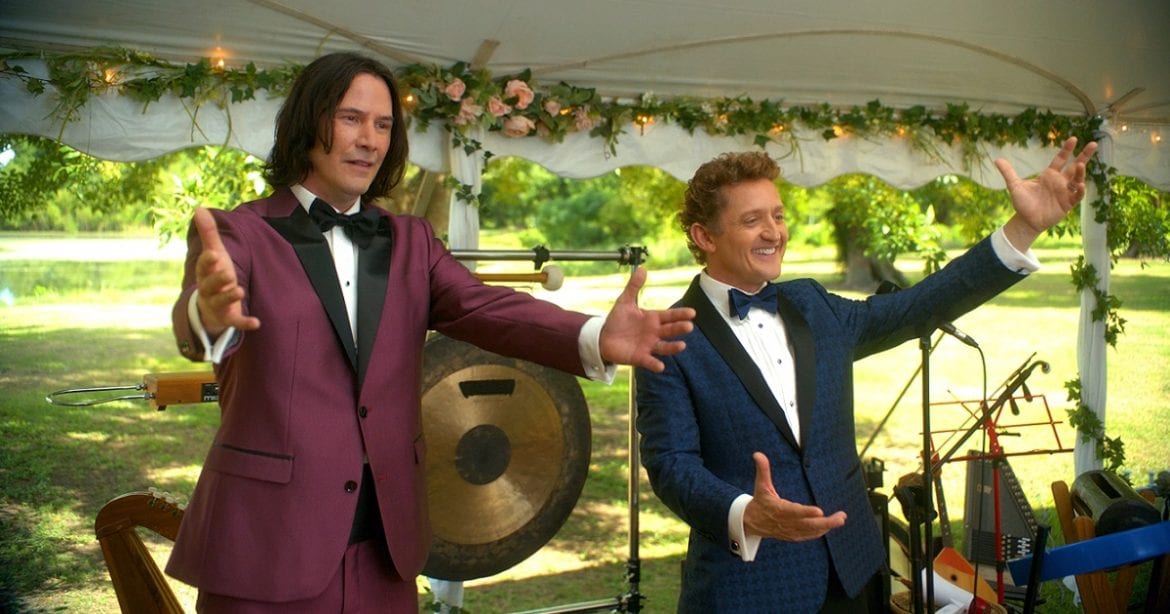 The world has changed a lot since the characters of Bill and Ted first hit the big screen. Bill and Ted, if you don’t know, are two loveable Californian simpletons who were prophesied to one day unite the world through their music. In the first film, Bill and Ted’s Excellent Adventure, failing a high school history presentation stood in the way of fulfilling their poignant destiny. If Ted failed, his father would ship him off to military school and their future band would never create the music that would harmonize human civilization. Thanks to a helpful time-traveler named Rufus (played by the late and immortally great George Carlin), the duo was able to travel through time, assembling a group of historical characters to unite them on stage for the ultimate high school history presentation and pass their history class in the process.

In the second film, Bill and Ted’s Bogus Journey, an evil gym teacher from the future sends evil robotic duplicates to the past to kill the duo and replace them. The villainous robots actually manage to kill both Bill and Ted. The duo then traverses the underworld, confronts their biggest fears, and befriends The Grim Reaper (William Sadler). Afterward, Bill and Ted manage to rise from the dead and claim their Rock N’ Roll throne.

Even with its dimwitted leads, these films were smarter than they’re given credit. If you’re a history buff, you will find something to chuckle at with Bill and Ted’s Excellent Adventure. As a movie buff, the Ingmar Bergman reference in Bogus Journey will win over your heart. The first one had a sweetness and innocence to it while also being ridiculously eighties. The second was more surreal, darker, and refused to follow the formula of the first one. 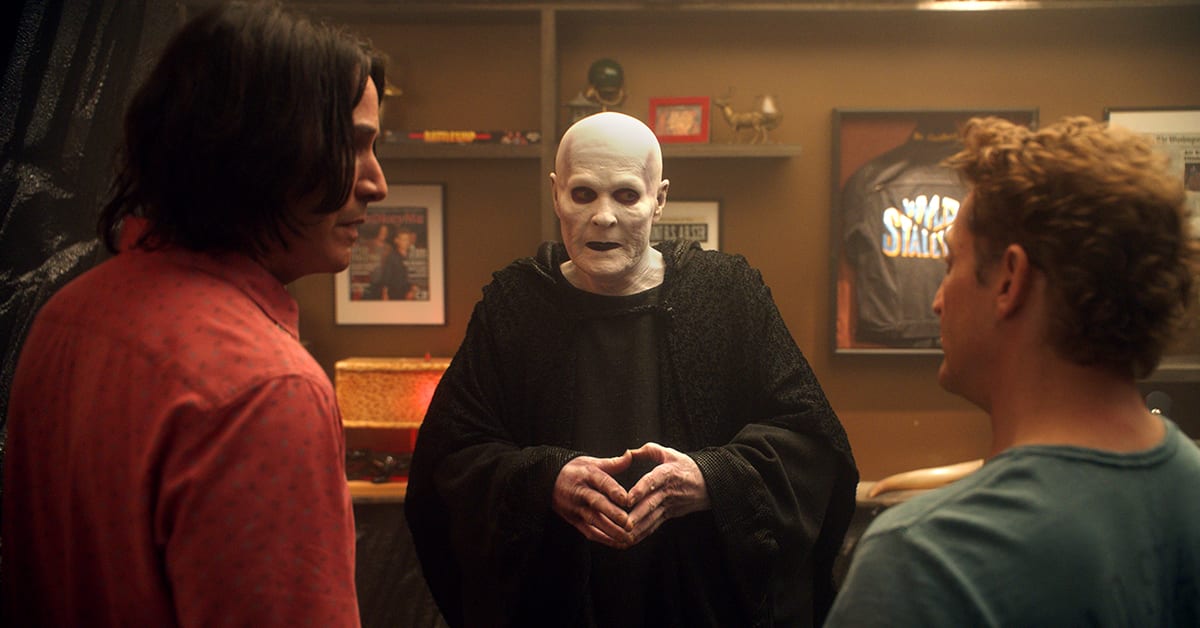 These films endured. The animations series, the dreadful short-lived, live-action show, and the comic books notwithstanding, the fans were naturally clamoring for a third one. I was one of them.

But as stated before, a lot has changed since the first one. When it comes to his acting, Alex Winter has stayed mostly behind the camera. His first directorial feature, Freaked, despite its lack of monetary success, has received a sort of cult status of late. (I’d recommend it if you really want to see some nineties wackiness — it has an uncredited supporting role by Keanu Reeves who’s completely unrecognizable as “Ortiz the Dog Boy”.) But instead of doubling down on the zaniness, following it up with a series of insane comedies, Winter has instead focused on documentary filmmaking.

Keanu Reeves, on the other hand, has been a genuine superstar. Being the star of several blockbuster franchises — such as The Matrix and John Wick — has not stopped him from starring in the occasional indie. Besides his movie career, there’s his public persona, as he’s known for being one of the more humble, down-to-earth celebs out there. He basically seems like the nicest guy in the world. In my humble opinion, anyone who dislikes Keanu Reeves simply can’t be trusted.

Meanwhile George Carlin, one of the greatest American comedians and social commentators, sadly passed away in 2008. Yet, in 2010, there were murmurs of a third film. The original writers, Ed Solomon and Chris Matheson, were working on a script.

Time moved on. The pre-production was long and hard. The studio rather wanted a reboot instead of a sequel. There were financing issues. Years passed. A third one, though certainly not impossible in these days of belated movie sequels and TV-show revivals, didn’t seem to be in the cards.

And then it happened, Winter and Reeves posed for official production photos with the announcement that a third film was greenlit. It was actually happening.

And now it’s 2020. These are the COVID-19 days. Unfortunately, the duo would not grace the big screen, again. Or, not in the way they intended, at least. (The film is available both in limited theaters and on PVOD.) It will likely not make the money the filmmakers had intended, but I have the sneaky feeling it didn’t really matter to them. They just wanted to make another Bill and Ted movie.

And God bless them for it. 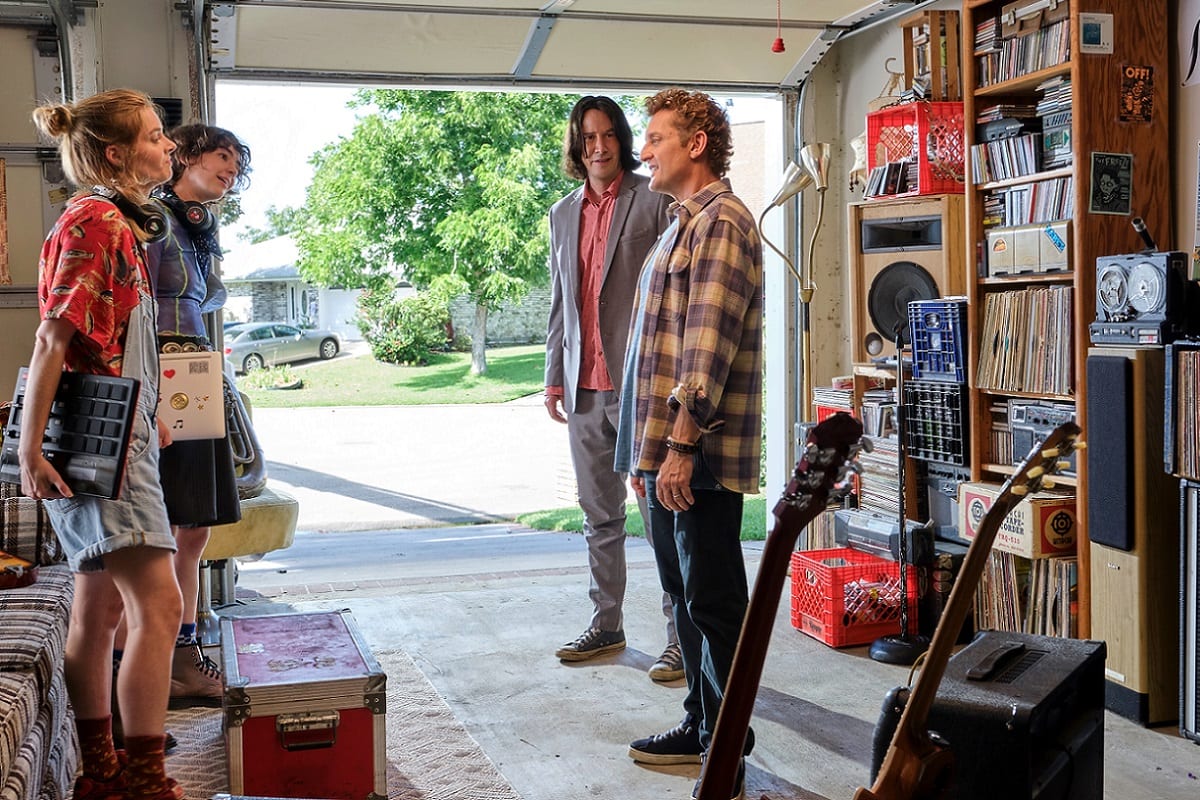 After almost three decades, The Wyld Stallyns, a band comprised of lifelong friends, Bill (Alex Winter) and Ted (Keanu Reeves), still haven’t found their sound. Despite what the end credits of Bogus Journey might have told you, their brief flirtation with fame did not bring about this utopian society, a world in which people are ‘excellent’  to each other.
Life went on. They both became fathers. There is Thea (Samara Weaving), Bill’s daughter, and Billie (Brigette Lundy-Paine), Ted’s daughter. As their names would suggest, they take after their fathers. Both of their daughters have unending faith in their father’s musical capabilities.

Meanwhile, their wives, Elizabeth (Erinn Hayes) and Joanna (Jayma Mays), whom they met in 15th century England in their ‘excellent’ adventure, are questioning whether they want to continue their relationship with them. Perhaps, as Ted fears, it’s time to move on to different things and grow up. Perhaps the party’s over.

Then Bill and Ted are visited by Kelly (Kristen Schaal), the daughter of Rufus. Having traveled all the way from the future, she urges the duo to come with her, as there is a cosmic disruption in the universe. As rapper Kid Cudi so eloquently puts it, there’s ‘ time displacement’, people from different periods are transported to random places. When Bill and Ted meet the elders of the future, they are told that they have until 7:17 that night to write their unifying music. If they fail, the universe as we know it will cease to exist.

Seeing that they have been trying to write their music for nearly three decades and have failed each time, the duo instead comes up with a most ingenious idea: why not go to their future selves and steal their music?

And so Bill and Ted venture to meet their future selves, hoping to steal their music and save the universe. Meanwhile, their daughters decide to help by traveling through time to assemble the greatest musicians of the past. With their combined efforts, humanity just might make it.

A Most Excellent Reunion

I was admittedly a little worried. Even with the original writers and cast back, there’s no guarantee the magic was still there. One would only have to look at the embarrassing Dumb and Dumber sequel in 2014, which reunited not just the original stars, but the directors too.

But Bill and Ted Face the Music is the sequel fans have been hoping for. It’s obvious this wasn’t just a cheap cash grab for the creators. Solomon and Matheson worked on the script for years, trying to perfect it. They wanted a sequel that honored what came before.

The film is an amalgamation of the previous two films. There are elements of both Bill and Ted’s Excellent Adventure as well as their Bogus Journey. The film has time travel shenanigans, a trip to the underworld, and even a glorious return of William Sadler as the Grim Reaper.

There’s a lot of fan service, but it never feels very cynical. You can’t blame them for giving the fans what they loved. It’s been two decades since the last one. It’s likely the last time we will ever see the duo on screen again. 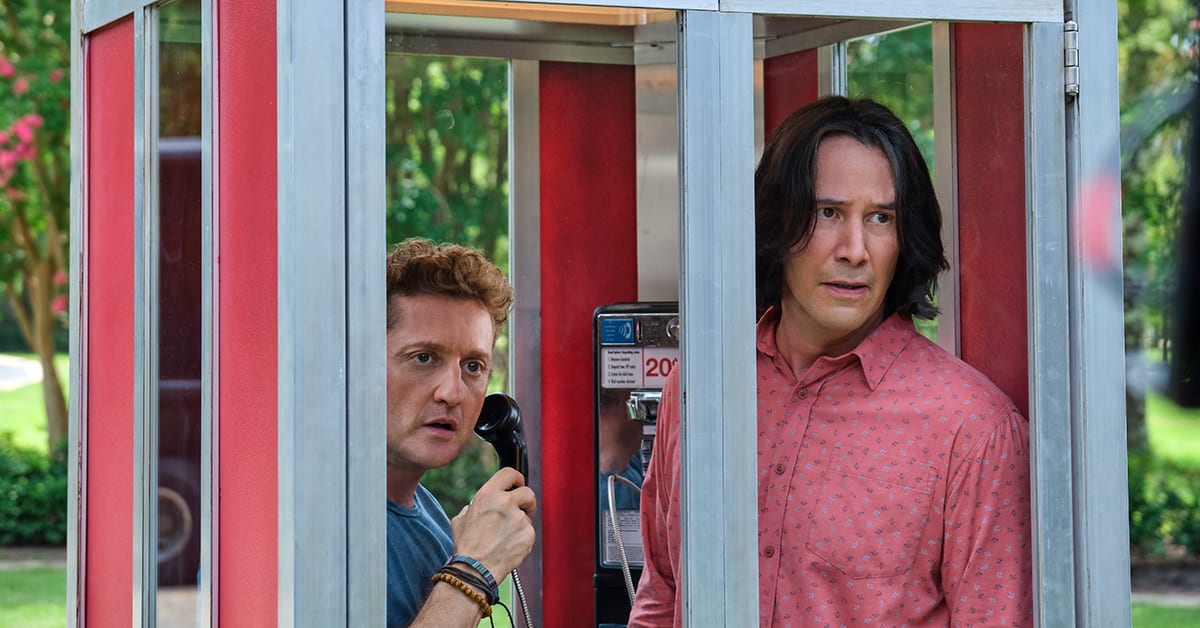 The Best Place to Be is Here…

There’s a warmness brimming from the screen. Perhaps this comes from the awareness of the real-life friendship between Solomon and Matheson (as well as real-life friends Keanu Reeves and Alex Winter). These characters were originally created for the stage by Solomon and Matheson, as they used them for their improv comedy. Somehow they leaped from the stage and onto the big screen. They’ve endured. And I like to think they always will.

The Best Time to Be is Now…

Bill and Ted Face the Music isn’t a perfect film by any means. It crams a little too much in its short running time. There are some odd editing quirks. Not all the jokes land perfectly. The abundance of green screen and CGI makes you miss the practical effects wizardry of the first two films.

But Bill and Ted Face the Music is undoubtedly a big-hearted Bill and Ted film through and through. There’s a lot you can nitpick. If you think too much about the time-travel paradoxes, you will likely get a headache. But it really doesn’t matter.

Just sit back and enjoy it. In a time of riots, general hostility, impending ecological disasters, and a pandemic, this is a perfect example of escapism. The world might not be perfect, but at least we got another Bill and Ted movie.

After those incredibly short ninety minutes are done, it’s time to reenter reality, to face the music once again. But perhaps this time, you’ll feel a little better about yourself and the world around you. It’s nice to think about what the world would be like if everybody thought a little bit more like Bill and Ted.

Thank you for reading! What are your thoughts on Bill and Ted Face the Music? Comment below!

[…] this cynical reviewer and be an actual good comedy sequel? Is it going to be a little more like Bill and Ted Face the Music, or will it be more like Caddyshack […]

[…] The Babysitter was a surprisingly odd showdown between Cole (Judah Lewis) and his babysitter Bee (Samara Weaving)’s gang of satan worshipping teens. In The Babysitter: Killer Queen, two years later, Cole is […]

This movie put me in a happier place; don’t expect the moon and it works just fine.
http://musingsofamiddleagedgeek.blog/2020/08/30/bill-ted-face-the-music-2020-and-its-not-at-all-heinous-dude/

‘My Own Private Idaho’ Is a Journey of...