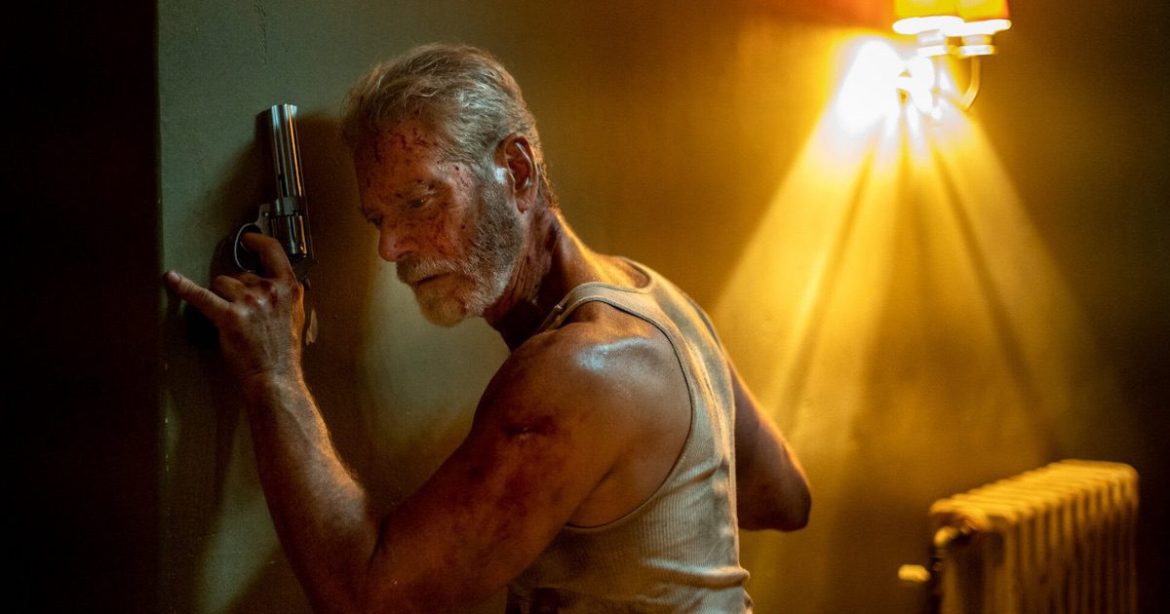 The 2016 horror/thriller Don’t Breathe was a surprise success that not only did well at the box office, but also proved to be a critical hit. The film followed a group of petty thieves who attempt to rob a blind man thinking it will be an easy job that will go off without a hitch. They, of course, are very wrong about that assumption and the film utilizes that premise as far as it can possibly take it in a 90-minute film that despite its lean length, still manages to feel too long. The third act of Don’t Breathe becomes a full-blown exploitation film when we find out the Blind Man is a kidnapping rapist and are subjected to watching him attempt to rape our protagonist using a turkey baster filled with his own… bodily fluids. It completely derails what was essentially a perfectly executed thriller for the previous hour by taking what was a morally complex film with interesting characters and turning the Blind Man into a literal monster, a move that was completely unnecessary and helps lay the groundwork for disastrous results in the premise alone of its sequel, Don’t Breathe 2.

Don’t Breathe 2 takes place several years after the first film and follows the Blind Man (we discover his name is Norman) who now has a young daughter named Phoenix (who he kidnapped) and the two of them live a quiet life which consists of Norman training her to fight for her life if necessary and sheltering her from living her own life and having agency. One night, a group of strangers attack their house and kidnap Phoenix (Madelyn Grace), forcing Norman to leave his house to navigate a world he quite literally cannot observe and examine, in an attempt to save Phoenix from these mysterious strangers. This may sound like the setup of the plot, which technically, it is. However, these events cover about the first hour of the film which runs about one hour and forty minutes.

The premise alone of Don’t Breathe 2 reveals a massive request of the viewer considering they have seen the first film: this film is asking you to be invested in and hope for a murdering, kidnapping rapist to successfully take back the child that he unlawfully kidnapped by violently murdering everyone is his path to achieve his goal. The film also attempts (unsuccessfully) to do so by making the people who have kidnapped Phoenix their own breed of despicable as the film later reveals that they are Phoenix’s parents, an interesting twist which is immediately undermined when you discover that they only found and took Phoenix from Norman because her mom needs a heart transplant and Phoenix is a match as a donor.

The problem with Don’t Breathe 2 is that the only character who you are even relatively able to be invested in is Phoenix, and the events of the plot are completely out of her control. This means that any sequences involving the other characters (and there are many) just aren’t tense or particularly thrilling because all of these characters are so unlikeable that it makes it incredibly difficult to feel even the bare minimum of investment in what happens to any of them. This is a shame, because I actually think this film is pretty well-directed by Rodo Sayagues. I would love to see what he could do with a film that I can connect with more on a narrative level. There is one sequence that is made to look like a single shot that is very well-executed (it also follows Phoenix attempting to escape and avoid people who will harm her, so that helps). The film is also significantly more violent than the first and there are definitely some good kills here, but once again, it doesn’t mean much if the characters on screen are such monsters that I’m rooting for death to triumph in the end.

There are certainly films where you can become invested in the deeds and lives of bad people, and there is an abundance of films among the greatest of all time that explore characters who are monsters. I am not attempting to argue that there is an inherent issue with that as a concept, but how Don’t Breathe 2 asks you to invest in Norman’s journey throughout the film is at best sloppy, and at worst, gross and manipulative. It’s almost a middle finger to audiences that they expect us to completely ignore the events of the first film (as well as the fact that Phoenix is a kidnapped child) for the thrills and chills of this film to work. It is even more egregious that their attempt to justify it isn’t throughout the course of the entire film, but rather, tacked on in the finale when Norman admits that he is a rapist and a murderer and immediately dies after.

Don’t Breathe 2 is a baffling sequel that feels like a cynical attempt to cash in on the surprise success of the previous film. It fails at just about everything it sets out to do narratively — not even strong and confident direction can save it from being a deeply unlikeable experience. The ending of this film doesn’t leave open much possibility of a third film, at least with Norman as a character in it. One thing is certain: like the Blind Man at the center of these films, it would have been better just left alone.

Thank you for reading! What are your thoughts on Don’t Breathe 2? Comment down below!

Harry Potter Should Have Died in ‘The Deathly...