‘Lily Topples The World’: Welcome to the Wonderful World of Domino Art

Lily Hevesh's artistry is an entry way into a sweeter, more endearing corner of online content. 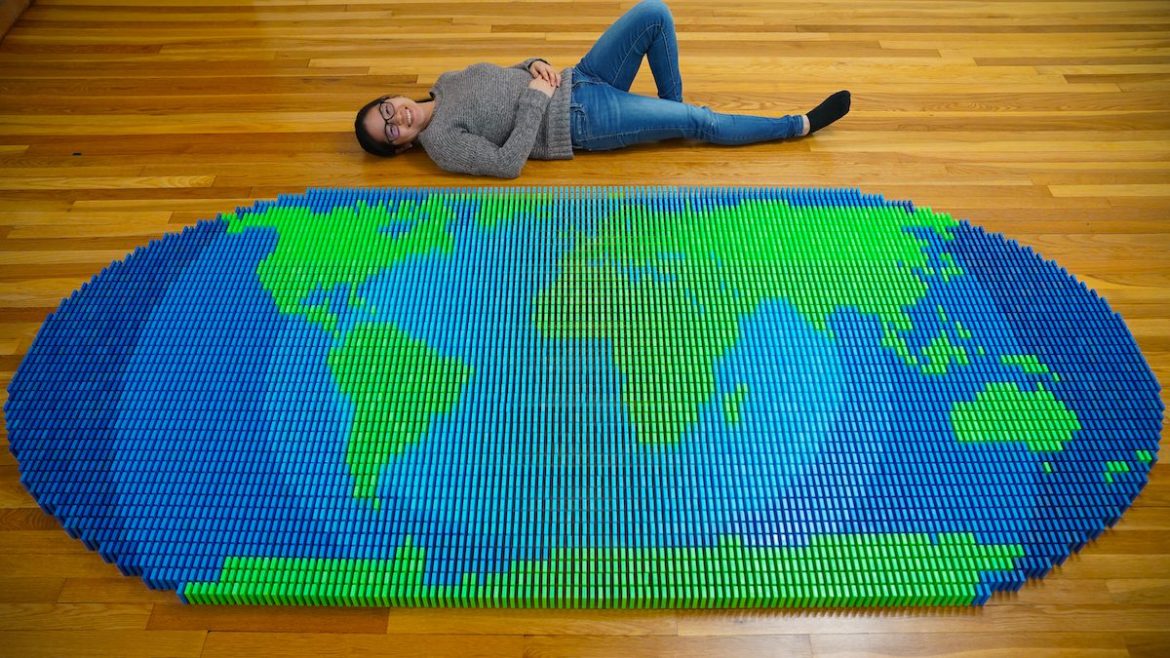 The world of online fame is a strange one. There are people out there with millions of fans, real fans that are actively subscribed to the output of artists and sometimes literally invested in their content via Patreon and the like. Yet, outside of that fanbase, nobody knows who they are. Now, in the case of the Paul brothers and their moronic ilk, ignorance is bliss. I’d pay good money to have the Men In Black flashy-thing their existence out of my brain. But there’s a massive, massive world of online content creation and some it is wonderful and without digital word-of-mouth, it might remain in a small niche forever.

Which is a long-winded lead-up to saying that I’m extremely pleased that documentarian Jeremy Workman and his producers (including Kelly Marie Tran) have brought the world of domino art to greater attention. In particular, the domino art of YouTube star Lily Hevesh, who creates pieces like this:

For more than a decade, Hevesh5 (her YouTube name) has been honing her skills building more and more lavish domino art.  Lily Topples The World tells the story of how this Asian-American star went from being a baby abandoned outside a Chinese orphanage to her current status of being the number one in her field.

Refreshingly, at no point does the film lapse into Horatio Alger-esque, “this could be you with a little work” nonsense. While she is a literal “Rags to Riches” tale, it’s been a long journey (amazingly so for a woman who is still only 22) based not just on hard work but on fierce intelligence and engineering skills that are uncommonly brilliant.

The makers build an enjoyable narrative flow to watching Hevesh grow in confidence. She was a very shy child, with the abandonment seeming to have left an effect even at that early age. She has a very loving adoptive (white) family but she did grow up in an overwhelmingly white area and was the only person of color in her classes for a long time so an “outsider” feeling was possibly unavoidable. Even when she started making YouTube videos it was six and a half years before she revealed her identity. (Tellingly about the state of online media and the wider world, there were a lot of “wait, Hevesh5 is a girl?” comments on that video.)

This growth from shy kid anonymously working on their craft to community star (some of the kids meeting her at events react in pretty much the same way as fans react to meeting the likes of Shawn Mendes — the absolutely adorable nerds that they are) is heartwarming to see. Hevesh seems extremely supportive of other creators and hasn’t forgotten what it was like when she was a kid learning from other people.

Another narrative strand is Hevesh attempting to move into the business side of dominoes. She has prototypes of her own brand dominoes built to her exacting standards and we get to see the process of honing marketing and pitching to toy companies to get Hevesh5 pieces into mass production and stores. Which when you see the camera cutting to execs lazily browsing their phone as she speaks, has to be a grind for anyone. It’s to the makers’ credit that this is made engaging for the viewer even if it was hard work for Lily and her family.

There’s something hugely enjoyable about watching someone who’s very, very good at doing something. Whether it’s an athlete, a musician, or any kind of artist, enthusiasm is infectious. The main joy of Lily Topples The World is in seeing the domino community itself. There doesn’t seem to be any cutthroat competition and you see the million-plus subscriber kids (at the time of writing, Hevesh5 is at 3.3m) happily stopping to help kids with a hundred subscribers on their channel.

The word “heartwarming” too often conjures the saccharine niceness of Hallmark or try-hard cheesiness. Lily Topples The World is heartwarming while remaining grounded and intelligent. It’s also a tremendously enjoyable visual experience. If you aren’t already sold on domino displays, be warned, it’s highly likely this documentary will lead to you falling down a YouTube wormhole of falling blocks. I’m going to go back to YouTube right now.

Thank you for reading! What are your thoughts on Lily Topples the World? Comment down below!

What is Cinema?: Breaking Down Martin Scorsese vs....