Please give Gracie Gillam every possible role from here on out. 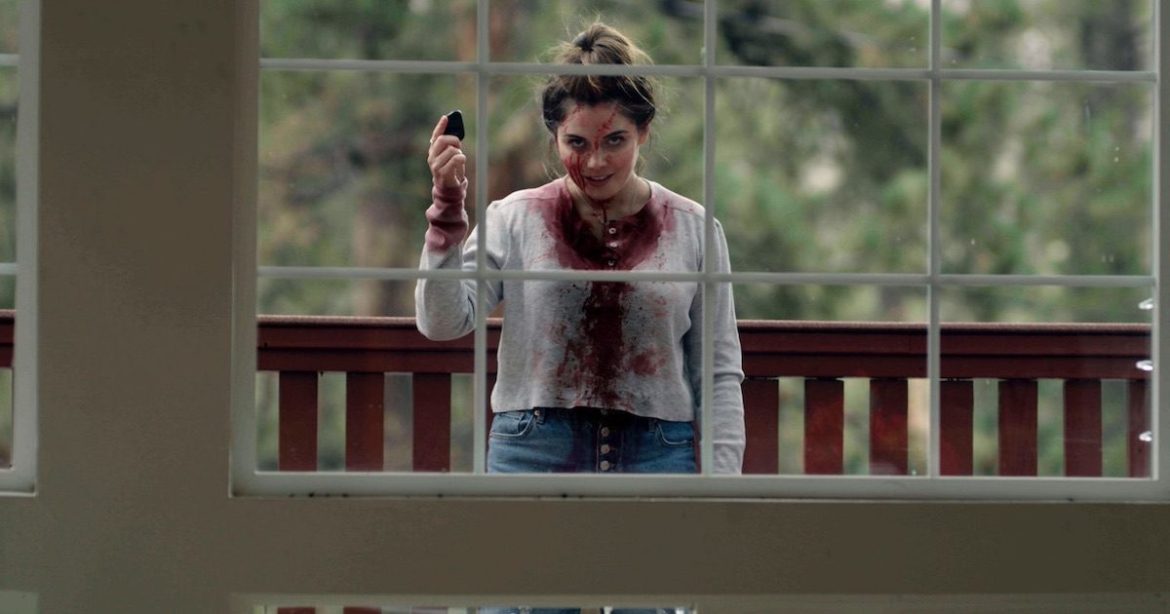 Superhost joins The Rental in the burgeoning, “Using Airbnb will ensure you are horribly murdered, probably while being filmed” genre.

Travel vloggers Teddy (Osric Chau) and Claire (Sarah Canning) are looking to revitalize their flagging YouTube channel, where they review vacation rentals. They’re a couple that works together and it’s clear that Claire’s greater focus and drive is causing a rift in their relationship. Teddy wants to get away from “clickbait-y” things. Claire wants to make a living, regardless of what gimmicks that may take. It’s hinted that this has caused previous property owners to get thrown under the bus in the name of getting people to smash that like button. So going out to the middle of nowhere where the cellphone signal is spotty at best, might be a make-or-break scenario for the relationship.

A House To Die For

Their latest property seems to have a few red flags scattered around its many rooms. A whole bunch of cat toys and no cat, waaay too many security cameras, and the giant, grinning scarlet banner that is Rebecca, the owner. Rebecca is…weird.  The decision to go with strange from the get-go for this character is a fun one. Obviously, the viewer knows she’s probably a murderer: they’re watching a film from a writer/director with a horror filmography, showing on Shudder. Oh, and the poster has her angry face spattered with blood. The question is, should the protagonists know and get the hell out of Dodge? The “Let’s go camping in the forest of blood and death” maneuver is the bane of horror films and nothing will kill suspension of disbelief faster.

Luckily for the viewer, Gillam makes Rebecca such a convincingly perky weirdo, that yeah, you probably wouldn’t be pleased if she started talking to you on the subway but, as Teddy says, “Look at her, she’s harmless.”

Claire sees the potential in Rebecca’s weirdness for its entertainment value. There’s nothing like someone being unhinged to attract YouTube eyeballs. The “Leave Britney Alone!” video has millions of views. None of them were because he was right. (And he absolutely was.) They were all fueled by the “Can you believe the way this guy is acting?!” reaction. Sarah knows this and wants to use it to its full effect. Even going as far as editing in her and Teddy’s double takes into the footage of Rebecca’s interviews afterward. The film makes some interesting observations on the internet’s demand for weirder, louder, crazier content. Claire is all in on giving the people what they want. Teddy is more hesitant. He has a certain idealism about not presenting people at their worst. However, when they are discussing the money woes of the YouTube page losing subscribers, he suggests they just get money off his parents. Money woes don’t seem to be part of his mental landscape. So, there’s sympathy toward Claire is on the basis that ethics are great, but enough money to pay the rent is also super important. Not everyone can afford to be a moral beacon.

Coming To Get You, Barbara?

The damage a well-placed online video can do is represented by Barbara Crampton, who with the likes of Jakob’s Wife is on something of a roll at the moment. (The horror legend has four features in 2021 alone.) Crampton plays Vera, a previous host of Teddy and Claire where the stay clearly didn’t go brilliantly. There’s a video on their channel entitled “The Crazy Bitch: Part One” so who knows how many episodes they devoted to attacking her. What we do know is that they ruined Vera’s business forcing her to sell her house and angering her enough to make her drive out to their current remote location and start throwing rocks at the place.

It’s a strength of Superhost that the cast members are all excellent. With only four people in the whole running time, a weak link would stand out a lot and there isn’t one here.

It’s fair to say though, that the movie belongs to its titular character. In a hopefully star-making turn from Gracie Gillam, Rebecca is a ball of weirdo energy that is impossible to take your eyes off. The decision to go with strange from the get-go is a fun one and Gillam grabs the part with both hands. Or at least firmly with the hand that isn’t holding a great big knife. I’d be fully on board for Superhost 2: Bex In The City.

Thank you for reading! What are your thoughts on Superhost? Comment down below!