Can this film bring the TCM franchise back to its glory days? You probably know the answer already... 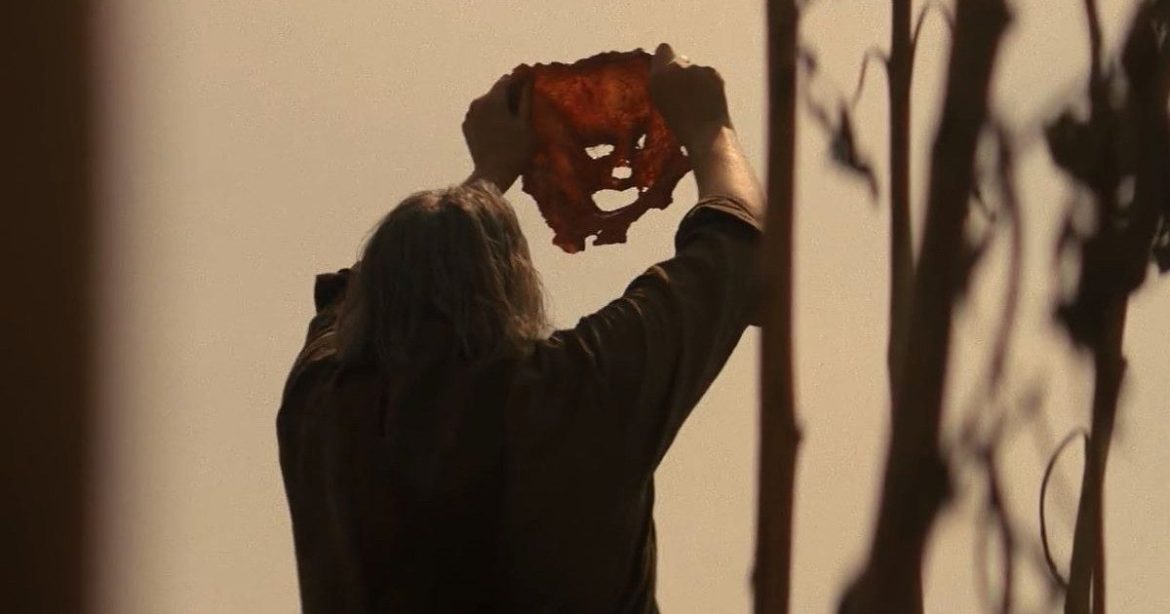 I’ve been a loyal apologist to the Texas Chainsaw Massacre franchise. I’ve even been compelled to write several retrospectives on the franchise, sharing my peculiar affection for the murderous on-screen antics of the Sawyer clan. Beyond my personal fascination with the series, it’s an ideal franchise to analyze as each subsequent sequel is indicative of the times.

The 1974 original, The Texas Chainsaw Massacre, was notorious for its shocking content, even though there’s hardly a drop of blood on screen. How the film was made is as interesting as the film itself, with the cast and crew having to deal with the idiosyncratic troubles of low-budget filmmaking. The dangerous stunts, the smell of rotten meat permeating from the roadkill used as props for the house they used as a set.

The production budget for the original was around $140,000. Compare that to the 1986 sequel, The Texas Chainsaw Massacre 2, which cost $4.5 million and was funded by the illustrious Cannon Group. Even with the original director, Tobe Hooper, returning, the sequel abandons the grittiness and replaces it with eighties extravagance, focusing more on the gory mayhem and dark humor. In the sequel, we see the Sawyer clan move from their decrepit house to some affluent cavern of horrors. Leatherface now wears a fancy suit and tie and hunts down yuppies. It’s my personal favorite of the series.

Leatherface: The Texas Chainsaw Massacre III, created by New Line Cinema which hoped to make Leatherface as culturally iconic as Freddy Krueger, was a deeply compromised studio mess, thanks to the meddling of the MPAA. It’s certainly entertaining, thanks to the performances of Ken Foree and a young Viggo Mortensen.

Then there’s the hilariously awkward disaster that is Texas Chainsaw Massacre: The New Generation. A film that was shelved for years until the studio wanted to capitalize on the success of both Matthew McConaughey and Renée Zellweger, who feature as the main antagonist and protagonist respectfully. It’s not very good, but McConaughey is absolutely hilarious. And yes, he does say “alright, alright, alright” in the film.

Then the series ventured into the early 2000’s horror remake craze, with 2003’s The Texas Chainsaw Massacre. It’s probably the best of all the horror remakes of the time, and features some spectacular photography by returning cinematographer from the 1974 original, Daniel Pearl.

The remake was followed up with a prequel, The Texas Chainsaw Massacre: The Beginning. As with nearly any prequel, it was unnecessary and completely disposable, but it’s entertaining enough.

2013’s Texas Chainsaw 3D returns to the old timeline, ignoring any of the sequels — though you could say that with nearly any TCM sequel, apart from TCM 2. It was then followed up with a prequel to the original film, imaginatively titled, Leatherface. Both films make some interesting choices, especially the latter, but neither could be perceived as a return to the form for the series.

Now it’s early 2022, and the franchise has ventured into the streaming age, with the annoyingly titled, Texas Chainsaw Massacre, which ignores all the sequels again and starts anew. On that front, with the constant alterations of the timeline and cannon, TCM has some similarities with the Halloween franchise, especially how it started as a nearly bloodless affair and ventured into the gory present.

The “buzz” around this film was not positive. The story that was leaked seemed laughable to many. The test screenings were apparently disastrous. The fact that it got dumped on Netflix meant that its distributors were worried as well. I wasn’t that worried. I just wanted an entertaining TCM movie. The series already ventured into some extreme lows, I didn’t think it couldn’t be that bad. Also with Fede Alvarez, director of Don’t Breathe, involved, I thought the film could have some potential.

From its storyline, you could see that its filmmakers were hoping to replicate the success of 2018’s Halloween, which ignored all the sequels and featured the original final girl returning in old age to exact revenge against her former slasher foe. Unfortunately, the original actress who portrayed Sally Hardesty, Marilyn Burns, died in 2014. Seasoned performer Olwen Fouéré (who gets memorably decapitated by Nic Cage in Mandy) replaces Burns as Hardesty.

Taking place nearly 50 years after the events of the first one, the story of the Texas Chainsaw Massacre has now become fodder for true crime lore (as returning narrator John Larroquette tells in the beginning). The infamous chainsaw-wielding serial killer, Leatherface (portrayed here by Mark Burnham), has never been caught. A group of young liberal-minded entrepreneurs purchases the ghost town of Harlow, where Leatherface is secretly residing. As you can probably guess, these young people invade Leatherface’s territory and do something to upset him, and before you know it, Leatherface (now probably in his late seventies to early eighties), is up to his dastardly tricks again.

The big question is whether the negative reception is deserved. The answer is not that simple, but unfortunately, I was a little disappointed. This despite the fact that my hopes weren’t that high to begin with.

As a fan of the series, there’s a lot to like. The film has some inspired cinematography, probably some of the best since the 2003 remake. Mark Burnham makes an excellent Leatherface, staying true to some of the mannerisms and making a frightening (and sometimes sympathetic) appearance. The film has some good ideas, such as the horrifying events of TCM becoming tourist fodder (as seen earlier in the movie where a small gas station sells chainsaw-themed corkscrews). I also like the soundtrack by composer Colin Stetson, though unfortunately, the music isn’t as memorable as his previous efforts such as in Hereditary and especially, Color Out of Space.

There’s some nice subtle fan service, most notably when old Sally Hardesty laughs similarly to how she did at the end of the original TCM when she manages to escape Leatherface’s wrath. The film certainly doesn’t shy away from depicting some elaborately disgusting bloodshed. Though some of the gore looks a little too digital, it’s mostly to a highly satisfying standard.

But all these positives are counteracted by some serious flaws, mostly found in the screenplay. Any of the interesting new ideas aren’t developed well enough. The notion of a town being bought by a group of progressive youngsters who then clash with some classic good ol’ boys gives us room for some possibly interesting satire, but all of it leads nowhere.

None of the characters, except for the central sisters, are developed enough for you to care about. Even though the film features impressive gore, there’s absolutely no tension or suspense. How can there be if you don’t care about the characters?
None of the characters on that front feel authentic. The Southerners feel like stereotypes, as well as the hipsters. Naturally, the authentic feel of the original will probably never be replicated. Yet, the setting in this movie seemed too artificial. In my opinion, some affection for Southern culture is necessary to do these kinds of stories justice.

The return of Sally Hardesty comes to an anti-climatic end. To be honest, while Marilyn Burns is one of the greatest final girls in cinema history, the character itself didn’t need to have a Laurie Strode arc. With Laurie Strode, it worked, not so much because of the character, but because of Jamie Lee Curtis’ long history with the Halloween franchise. Perhaps it would have been different if Marilyn Burns would still be alive, and while Olwen Fouéré does a good job with what’s she’s given, Sally’s eventual reunion with Leatherface feels hollow.

Again, the problem lies in the writing. The concept of a traumatized woman coming face to face with an old tormentor is the stuff of great thrillers. There’s almost a moment, especially in the first few dialogues Sally exchanges with Leatherface, where you feel like the writers are on to something interesting. But alas, again, it feels underdeveloped.

There’s the strange arc of one of the two final girls, Lila (Elsie Fisher). While Fisher does a good job, and it’s refreshing to see an unsexualized final girl (wearing baggy clothes throughout the whole movie!), her arc feels painfully undercooked. The fact that they made her a survivor of a school shooting is a daring move, something that should be handled delicately.
Alas, this trauma of hers is barely examined. A few moments of dialogue, a brief flashback that ultimately leads to her grabbing a firearm to protect herself. That’s it.

Another major problem lies in its depiction of Leatherface. While Burnham is great, the character doesn’t move or act like an old man. Throughout the film, he’s shot, stabbed, and beaten but almost nothing seems to faze him. He’s an indestructible monster with the stamina to rival any youth athlete.

This might seem like a ridiculous complaint but understand that Leatherface is not supposed to be some supernatural slasher villain. He’s not Michael Myers. He’s a gargantuan, mentally-ill man who doesn’t understand that what he’s doing is bad. That’s what makes him interesting.

To occasionally exaggerate his strength is fine, especially for entertainment purposes, but this film strains the credibility of its central character.

Overall, the film might not be the worst of the franchise. But it’s certainly a contender, alongside TCM: The Next Generation, Texas Chainsaw 3D, and Leatherface.

To be honest, I think its initial mistake is its large focus on Leatherface. What made these films memorable wasn’t just the big guy waving the chainsaw around, it was the family that supported/enabled him. It was the secondary maniacs: Chop Top (Bill Moseley), Grandpa (Ken Evert), and Drayton (Jim Siedow).

Leatherface should be part of an ensemble, not just the foundation of the whole show. He isn’t like Freddy, Jason, or Chucky. He needs his family. Remember the old Drayton family saying, “the Saw is family.”

Thank you for reading! What are your thoughts on Texas Chainsaw Massacre? Comment down below!