‘Hook’: Holding Onto Your Child Self in an Adult World

A reminder to take a breath and appreciate what you have. 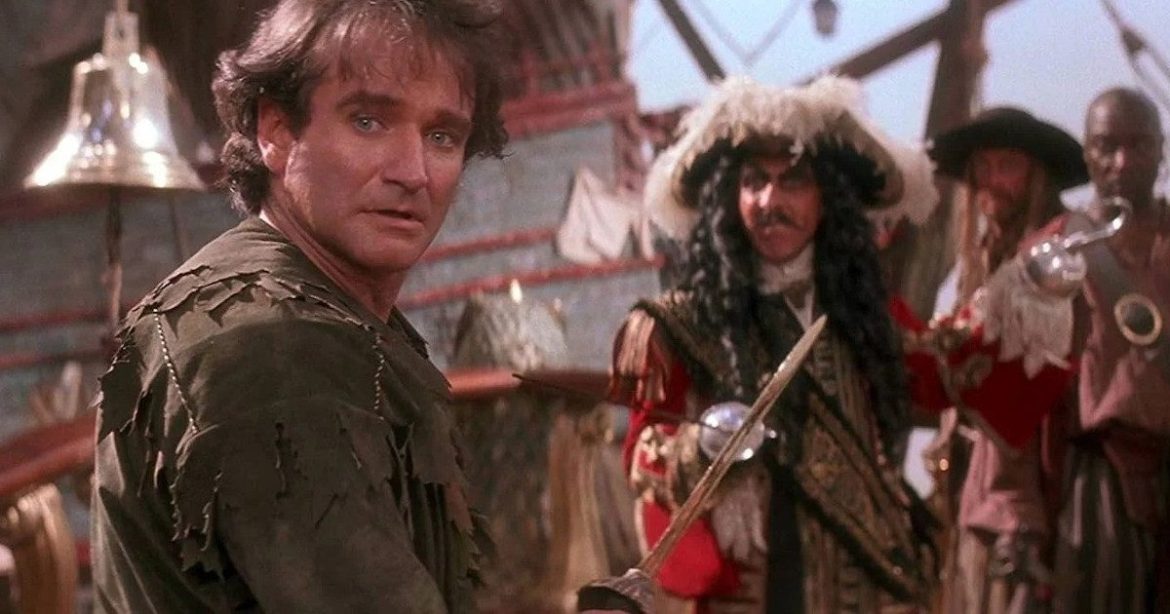 As an adult, it’s easy to get caught up in the daily grind. Work, marriage, kids, etc., can eat up our day before we know it’s gone. Sometimes we need a proverbial kick in the behind to remind us to take time to breathe and bring out our inner child.

The 1991 film, Hook, is a sequel to the beloved childhood novel Peter Pan, by J. M. Barrie. It stars the late and still beloved Robin Williams as the adult Peter Pan and Dustin Hoffman as Captain Hook. When his children are kidnapped by Hook, Peter is the only one who can save them.

I recently turned forty. I understand the pressure that Williams’s character, Peter Banning, is under. I don’t have a spouse/partner or children to take care of, but I completely get what he is feeling. The push to be productive is one that is ever-present, even after the workday ends. Between my day job, my after-hours writing, and other activities, it feels like there is never enough time. It would be wonderful if I could just lay on my couch and watch TV after work. I just can’t, there is just too much to do.

Peter is not a bad man. He loves his family and is trying to be the best husband and father that he can be. But in getting so caught up in work, he forgets that the job is not everything. As a viewer, I want to reach through the screen, shake him, and remind him of what is important in life.

Robin Williams Proves His Worth as an Actor

Though Williams was known for playing out-there comedic roles, he proved that his acting abilities go far beyond doing silly voices. This role is halfway between his ultra-serious (and heartbreaking) counselor in Good Will Hunting and playing a father who just wants to see his kids in Mrs. Doubtfire. The shift in his character arc is one that could easily slip into overly dramatic or overly cheesy. He is able to straddle that very precarious line that only the most skilled actors can do.

Dustin Hoffman Is Having Fun

When an actor is having fun, it shows. In this film, Hoffman does not only fully embrace his role, but he is having fun while doing so. Completely embracing the campiness of this version of Captain Hook, he is all in with the wig, the red coat, the voice, the hook, and the mustache.

His Hook is an old man bearing a grudge and hell-bent on getting his revenge on a child. Though he has the outward behavior and clothing of a gentleman, he is an egomaniacal coward who will use every underhanded tool in the toolbox to ensure his victory. It is a delicious part that is relished on both sides of the screen.

Rufio Is Still a Badass

When you are young, there is nothing cooler than the rebel who gives the proverbial middle finger to the adults. Since Peter’s departure, Rufio (Dante Basco) has taken over the leadership of the Lost Boys. With his multi-colored triple mohawk, youthful arrogance, and sword fighting abilities, he is the perfect successor to Pan.

Ferris Bueller once said: “Life moves pretty fast. If you don’t stop and look around once in a while, you could miss it.” The lesson of Hook, as I see it, is to take a breath, smell the roses, and if only for a few minutes, bring out the inner child that is buried under the layers of adulthood.

Thank you for reading! What are your thoughts on Hook? Comment down below!