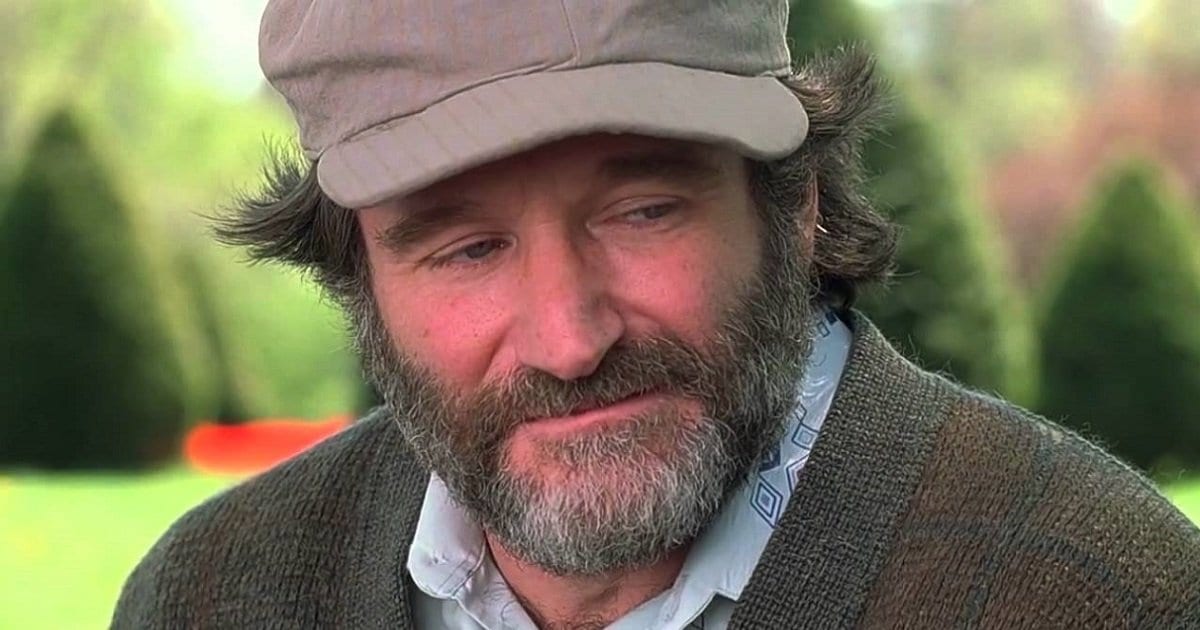 Robin Williams was quite possibly one of the greatest comedians and actors of our time. He could always make us laugh with his off-the-wall stand-up bits and flawless impressions. But he could also make us cry with touching monologues and sweet stories.

Yesterday, David Itzkoff released his biography of Williams entitled Robin, which I expect will fly off the shelves quicker than a Harry Potter novel. In honor of this release, let’s take a trip down memory lane and relive some of the man’s greatest performances.

I’m not a huge fan of this movie, but not because it lacks a compelling story line or a fantastic performance from Williams. Frankly, what disturbs me about this film is the character he plays. In this thriller, Williams is a mentally disturbed photo developer named Seymour “Sy” Parrish. As a result of childhood trauma, he forms a fixation on a middle-class family who he develops photos for, stalking them into dangerous territory. While I greatly admire Williams’ dedication to the role and the way his simple nuances in body language convey his tortured soul, I am still not a fan of seeing my favorite comedian painted as the villain, albeit a misguided villain. Image via Where’s the Jump?

Yet again, this isn’t Williams at his comedic best, but rather, at his dramatic best. The Penny Marshall-directed film — an adaptation of the novel of the same name — stars Williams as Dr. Malcolm Sayer, a doctor at a mental hospital who pioneers a medicinal breakthrough for a group of patients who become catatonic following an encephalitis outbreak. Robert De Niro is remarkably believable as a catatonic patient; however, Williams is the one who truly shines in this film. His calming, passionate demeanor projects a sense of caring and determination to help his patients receive a better quality of life, which is exactly how the real Dr. Sayer would have been.

This isn’t a huge comedic role, but the film does have his moments. Set during the Cold War, Williams plays Vladimir Ivanoff, a Russian musician who defects to the United States in a Bloomingdale’s department store. However, adjusting to life in the United States is difficult, as you can probably imagine. One of the best scenes from this film — and one of the best acted as well — is when Ivanoff enters an American grocery store and asks where the coffee is. When he witnesses that there is an entire aisle dedicated simply to different brands of coffee, he breaks down into hysterical tears faced with all the choices and freedom he has. Moscow on the Hudson has a ringing patriotic air that Williams imparts with just enough pride to make you proud of America, but not enough to verge on nationalism.

Now, I realize that this movie isn’t too hot with critics, or even with audiences for that matter, but it’s a cult classic and a fun family movie. Williams plays Peter Pan, who has grown up, married, and had kids, but must return to Neverland to rescue his son, Jack (Charlie Korsmo). Directed by Steven Spielberg and costarring Dustin Hoffman as Captain Hook, it follows an adventurous plot and has lots of excellently choreographed sword fights that incorporate dazzling acrobatics. Despite the fact that the special effects are a little dated (you can practically see the wires holding up Peter Pan as he flies), Williams is wonderful and brings a smile to your face with his usual comical spirit. 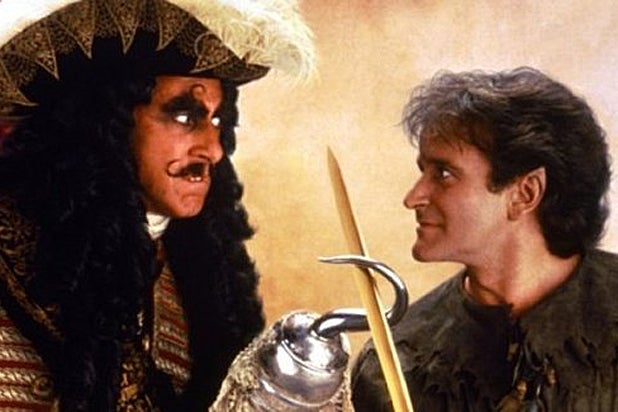 I mostly watch this movie for Nathan Lane but Williams gives an astoundingly hilarious performance in this film. Lane plays drag queen Albert Goldman whose partner is gay cabaret owner Armand Goldman (Williams). They find out that their “son,” Val (Dan Futterman), is getting married to a girl from a very conservative family (whose parents are played by Gene Hackman and Dianne Wiest). Now the Goldmans have to pretend to be completely heterosexual men who aren’t in a relationship at all with some highly entertaining consequences. While Nathan Lane’s performance is riotous, Williams’ often steals the show with his frustration in trying to teach Albert how to be a “real man.” This is exactly the kind of comedy I expect from Williams and I laugh my butt off every time.

Robin Williams is at his stand-up comedic best in this film. He plays Adrian Cronauer, a rowdy radio DJ broadcasting to Vietnam during the war. As a radio jockey, he gets a chance to use his accents, rapid-fire quips, and impeccable comedic timing and improvisation to have the audience in stitches. Good Morning, Vietnam does a fantastic job of bringing some humor to a bleak situation and genuinely portraying the spirit of the comedian. What I like about this film is that Williams is only working the part of Vietnam radio jockey into his own stand-up routine — it’s a part he is playing while incorporating his circumstances and surroundings and joking about it until tears come out of your eyes. 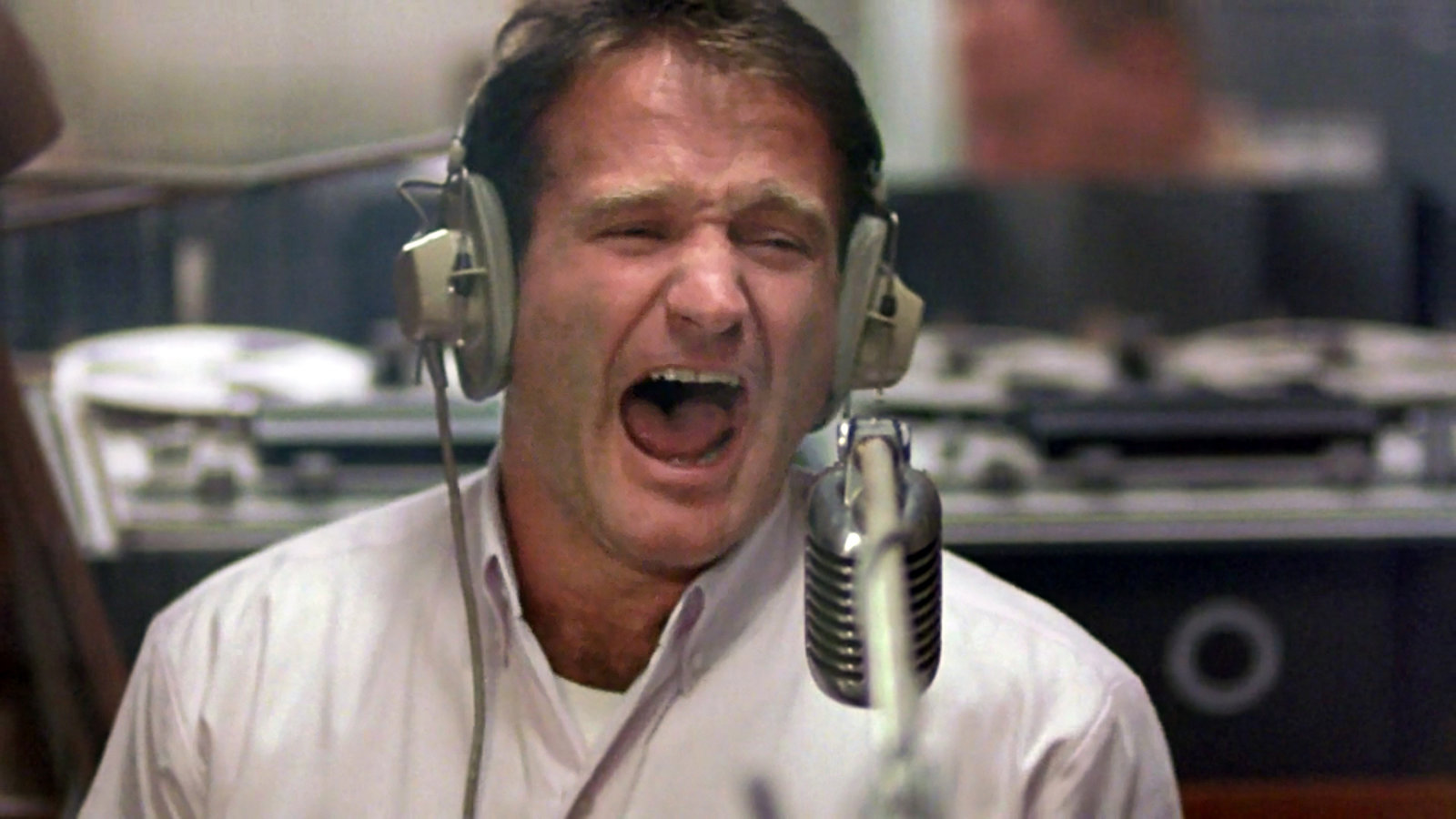 Dead Poets Society is quite possibly the most motivating movie on this list. In this coming-of-age film, Robin Williams plays John Keating, an English teacher who inspires a group of boys to venture into the world of poetry with an open mind and heart. In the process, he also teaches them life lessons that help them grow into men. Williams is stunning in this film as he has just enough craziness to play the carefree professor but just enough compassion to also be the concerned confidante for his students. Despite the fact that the first time I watched this was when I was forced to in high school, it’s one I watch again and again just to regain inspiration and remember what life is about.

This is actually my all-time favorite Robin Williams movie. Costarring alongside Sally Field, Williams plays a husband who, reeling from divorce, would do anything to be closer to his kids again — including dressing up like a woman and being their nanny. Like a lot of movies I enjoy, I like Mrs. Doubtfire primarily for its many quotable lines. The first one that comes to mind is: “Oh, a boy… I don’t work with the males, ’cause I used to be one.” Since it’s Robin Williams, there’s an abundance of those little one-liners in this film. However, I also enjoy this film because it shows to kids with divorced parents that it’s okay for parents to split up and it’s not their fault — something I think they need to hear a little more often. Not everything has to be the perfect Hollywood ending and sometimes couples just don’t work out. I think Williams’ last lines sum that up well:

This is a classic film starring Matt Damon and Robin Williams. Williams plays a psychologist trying to help a young MIT janitor (Damon) find purpose and direction in his life. While this movie has its heavier moments, it also has its more lighthearted moments that will make you smile. Maybe it’s the beard, maybe it’s the smile — whatever it is, Robin Williams is able to play father figures exceptionally well. His lines pass through the screen and hit us right in the gut with their life lessons. We treasure what he teaches us about imperfections and learning to let go simply because it’s Robin Williams saying them. His performance is what makes this a highly-revered movie.

What better to take the top spot than a Disney classic? Williams’ stand-up brilliance shines through in this movie with all the subtle one-liners that both kids and adults will love (though the adults will definitely catch on to more). We all know the story of Aladdin, so I’ll sum up very quickly: a beggar uses a genie to help him gain the love of the princess and faces trouble along the way. Williams’ portrayal of Genie is quite possibly the best voice acting I have ever heard. It fits the character perfectly while also displaying Williams’ personality at the same time. Without a doubt, this is Williams’ best performance of all-time.

Thanks for reading! What are your thoughts on top 10 Robin Williams movies? Did we miss any? Comment down below!

[…] a sucker for a good Robin Williams flick. The Birdcage is one of my favorites because of the departure it takes from his normal […]

I’m so glad to see “World’s Greatest Dad” in the honorable mentions. That is a criminally underseen movie.

I also saw Dead Poets Society in high school for the first time. That and Good Will Hunting are my favorite of his roles, such compelling films.

Yep, it had to be Aladdin! Where would you rank Aladdin and the King of Thieves?

Probably somewhere in the honorable mentions. Hard to live up to the original

Jumanji and Insomnia are both streets ahead of the appalling Hook.

Great actor – my fave’s are Awakenings and Dead Poets Society.

I can’t choose just one favorite!

The film Jack is my favourite Robin Williams film. Along with Patch Adams. Though to be honest most of what he’s been in I’ve loved, but those 2 are my absolute favourites.

Dead Poets Society is one of, if not my favourite, movie and a lot of that is down to Robin Williams. Good Will Hunting is also not far behind it. Great films :)

Great list. Pretty much agree with your list, although I would put Good Will Hunting at number 1 and Aladdin at number 2 because Aladdin is animation. One movie I haven’t watched is “Moscow on the Hudson”. I’m gonna have to see that now.

I agree with you about the order of #1 and #2 for the exact same reason. His performance in GWH definitely merited the Oscar that year!

Yes, amazing, thoughtful list. Completely agree on Hook being a cult classic and on Aladdin at number 1.