‘Mrs. Doubtfire’ is More Relatable Than Ever 25 Years Later 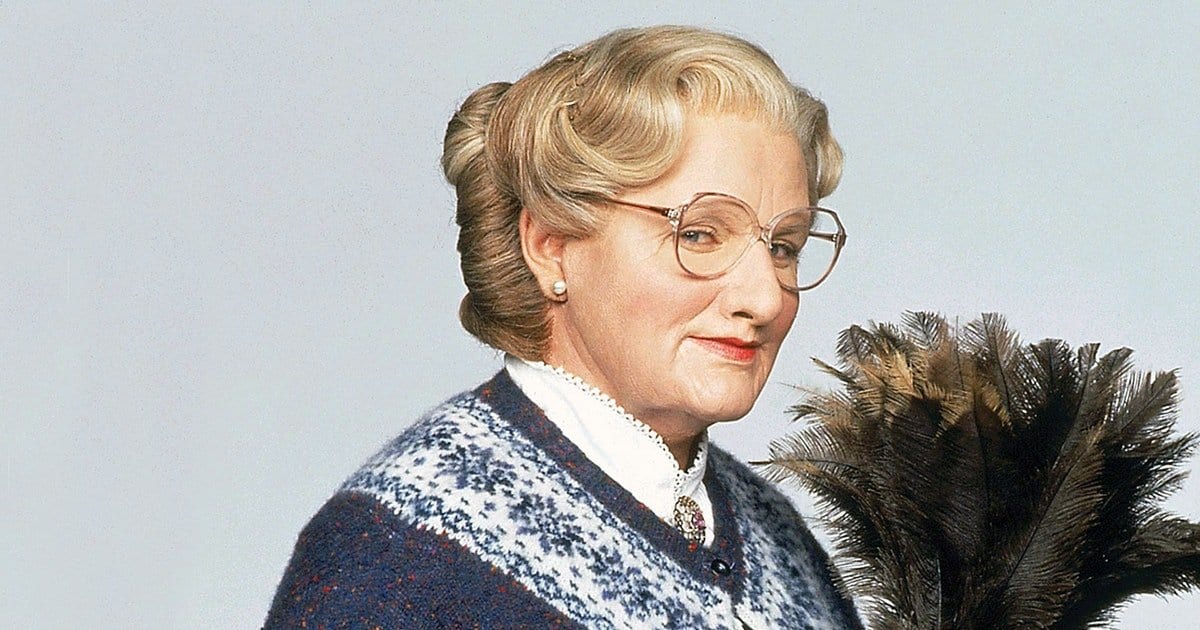 About 4 years ago, when I was idly browsing through Facebook, I saw the news about Robin Williams‘ passing. People were posting quotes and images from movies that he had been in, showing us the sheer impact an artist can have on the lives of others. For the most part, a lot of us could not comprehend how this had happened. How is it possible that a man who thrived on making the world smile, found it so difficult to smile on his own? But that is the world of the celebrity. We see the performance, the appearance, but never the struggle or the despair.

Growing up, Williams was an integral part of my childhood. He was this larger than life character, so entertaining and personable. Movies like Jumanji and Mrs. Doubtfire are movies that I have watched many times. It didn’t matter that I knew the endings or how things would turn out, I watched these movies for him and the easy chemistry he had with everyone he worked with.

Since his passing, I have looked at these movies with new eyes. Before, I was distracted by his humor, but now, I feel I see a kind of sadness in his eyes, a sadness that is consistently covered by a laughing exterior. Maybe I am imagining things. Regardless, I feel that Williams’ ability to handle both dramatic and comedic roles competently is a rare thing, and it made me appreciate Mrs. Doubtfire even more.

When I was younger, I would never have said that Mrs. Doubtfire is a movie about divorce; this mature theme flying over my young, myopic head. It is also a rare divorce movie, where parents can split up but it doesn’t have to end in disaster like Kramer vs. Kramer, or end with the parents getting back together like Liar Liar. Daniel (Robin Williams) and Miranda (Sally Field) are no longer in sync with each other, moving apart and in different directions. It does initially feel like the end of the world, especially so for Daniel, since it appears that his family is moving on without him.

It is difficult for the children as well, to have to navigate the waters between their father and mother. They want to spend more time with their father but also want to obey their mother. It is such a strange thing to be sharing all your lives together, and then suddenly, you aren’t anymore. The movie doesn’t downplay the ugliness of divorce, and the difficulty for all parties involved. But it does show us that a balance can be struck. Even though parents can’t be together anymore, personal conflicts need to be put aside for the welfare of their children; there needs to be a neutral ground, which we get to at the end of the movie.

Image via Consequence of Sound

The entire cast is just wonderful to watch. Of course, Williams is the glue who holds it all together, but everyone brings so much to the table. His brother, played by Harvey Fierstein, only shows up in a few scenes, yet completely sells me the idea that they are brothers. Sally Field is so lovely and emotes extensively with her face; it is exquisite to watch. The children have such good rapport with each other that you really believe they are siblings. Mara Wilson is especially adorable and has such a good emotional range for one so young. It is sad that she no longer acts. 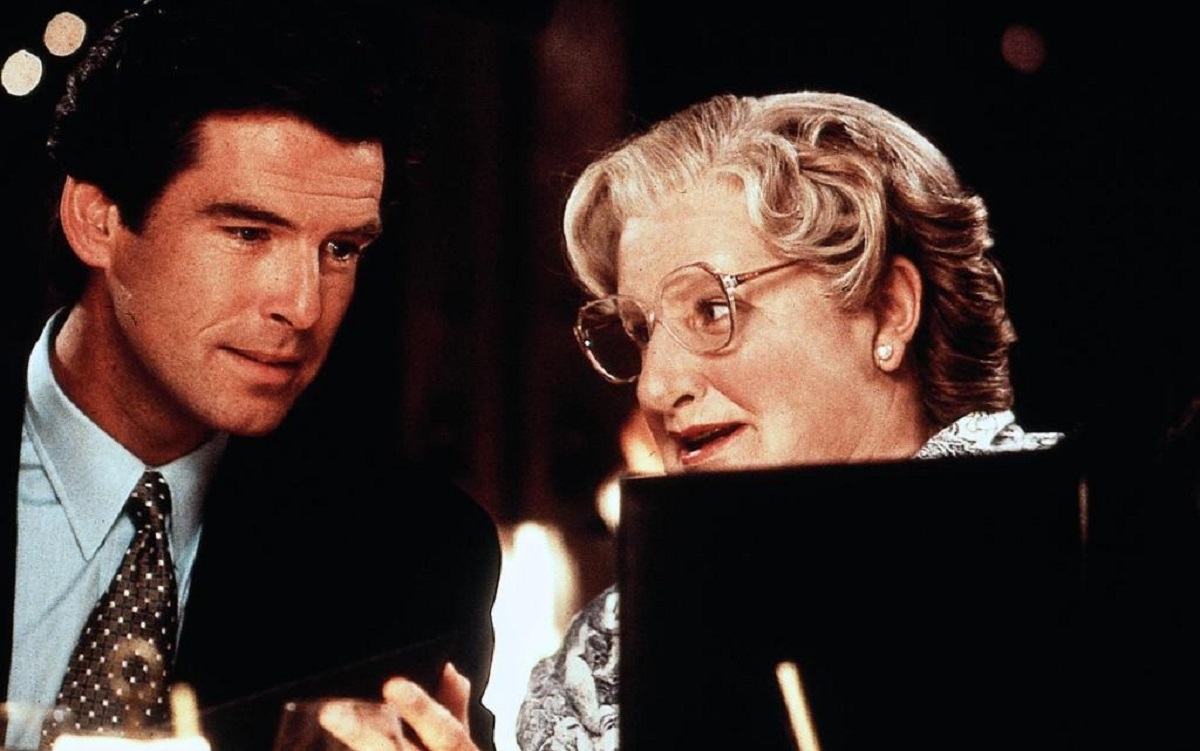 I would be remiss if I didn’t mention Pierce Brosnan. My goodness that man is hot! I can see why he was chosen to take on the mantle of James Bond after watching this movie. His scenes with Williams are hilarious! He doesn’t say much, since Williams would just jabber away, but his reactions are simply priceless. There is a moment in the movie where Williams actually brings up Miranda’s use of a vibrator (of course he is making it up to scare Brosnan away), but it is so subtly done that a child would not understand what he was talking about. It certainly went over my head as a child, and as an adult, I nearly spit out my water hearing Williams go on quite extensively about oral sex. I really wonder how Brosnan managed to keep a straight face through it all.

The Creation of Mrs. Doubtfire

Image via Geeks of Doom

Daniel creates this fictional persona in order to spend more time with his children, since he only gets to see them once a week. I found it interesting that this persona actually helped him to become a better father. You see, Daniel is well-meaning and fun to be around, but he isn’t the most responsible father. We see this at the beginning of the movie when he throws his son a birthday party by getting a petting zoo and letting everything just run amok. He had also lost his job, which seemed to be a frequent thing for him, based on the children’s reactions. Don’t get me wrong, his decision to leave his job was a principled one, but the movie very clearly sets the tone of screw-up father, redeemed only by his love for his children.

By playing the role of Mrs. Doubtfire, he had to become everything he sold on paper to Miranda. This involved being an immaculate housekeeper, strict yet kind with the children, and someone who can cook up a storm. The divorce and moving apart from each other allowed him to change and grow up. This idea is encapsulated best at the end of the movie, when Mrs. Doubtfire, now the host of a successful children’s show, receives a letter from a child whose parents are going through divorce. Mrs. Doubtfire has wise words for the child, and for all of us.

There is an expectation of what constitutes a family: Two parents and their children. But this is not always the case. Parents can split up and begin new families, we could come from single parent households, live with foster parents or have adoptive parents. Mrs. Doubtfire was ahead of its time in the selling of this idea, especially when we look at how diverse the idea of family is today. The most important lesson from Mrs. Doubtfire is to love, and to continue to love even when the odds are against you, so that you will “have a family in your heart, forever.”

Thank you for reading! What are your thoughts on Mrs Doubtfire? Comment down below!

This is an amazing article

Wow! Thank you so much for your kind words. To be honest, it took me a while to pen, since I kept thinking about his passing. 4 years and I am still not over it.

Thank you for the tribute to some of Robin Williams’ finest work. He was a part of my life for so many years, it’s hard to believe he’s gone.

I know what you mean Liz. I think Dead Poets Society is the requisite movie all English Majors watch before hopping onto the bandwagon. It certainly made me want to become an educator.