‘The Man Who Shot Liberty Valance’ Is a Tale of Contrast 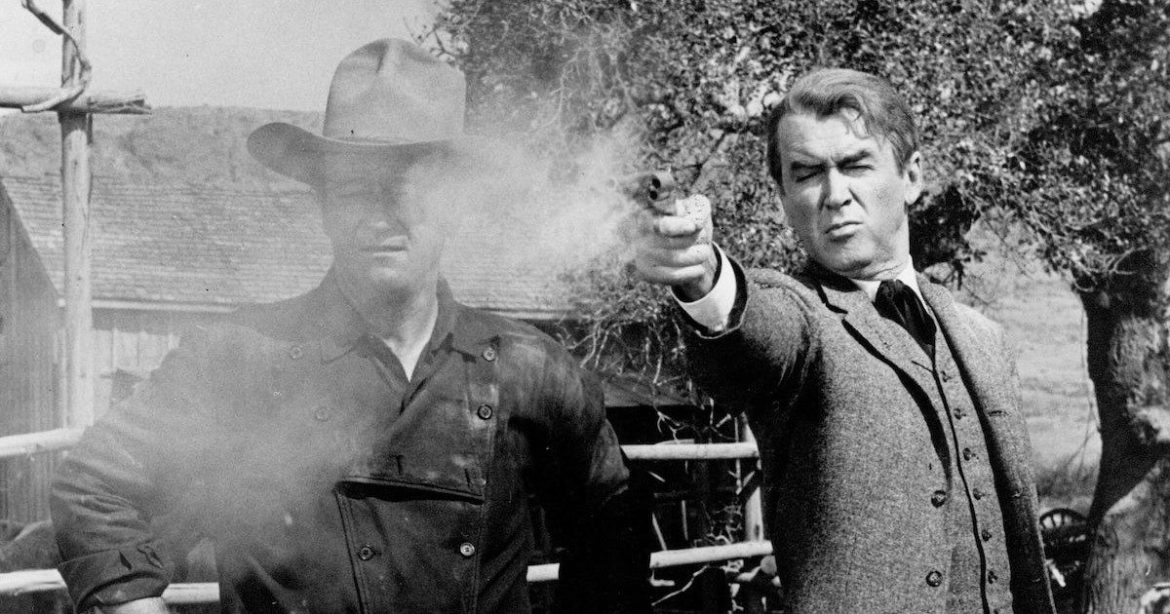 John Wayne and James Stewart were two of the defining actors of Westerns in the mid-20th century. Movies like The Searchers, Winchester ’73, and, of course, The Man Who Shot Liberty Valance are still well-received films that are lauded today.

That doesn’t mean that these actors were in any way the same. Their acting styles widely differed, a fact you could witness in The Man Who Shot Liberty Valance. James Stewart focused more on dialogue and how he used his voice and demeanor to carry across its meaning. John Wayne focused more on body language and how he conveyed strength and intimidation through posturing.

The Man Who Shot Liberty Valance was an exhibition of what happens when these two acting styles meet.

James Stewart had an acting style that was well-crafted from years of working in films like Mr. Smith Goes to Washington, Rear Window, and The Philadelphia Story. While no stranger to the physicality of acting, Stewart put a lot of his focus into the words he was saying. One of his best speeches comes from Mr. Smith Goes to Washington, when he filibusters in the Senate with impassioned dialogue about the American government and what it could accomplish.

The Man Who Shot Liberty Valance showed off some of that grand dialogue by giving Stewart a chance to laud the benefits of law and order in a time when there seemed to be very little of it. Rather than taking the typical cowboy route of bloody revenge, Stewart’s character, Ransom Stoddard, is zeroed in on making the titular villain pay for his crimes in a court of law. This is in contrast to John Wayne’s character, Tom Doniphon, who believes “justice” is just another name for a gun at your side.

Let’s be completely candid here: John Wayne wasn’t that great of an actor. All his dialogue was read with that same lazy, tough-guy voice, no matter what the words were saying. He conveyed most of his emotion through body language, if he did convey any emotion at all. He excelled playing the tough, cool guy with a heart of gold.

In a way, Wayne’s acting style was the exact opposite of Stewart’s. Stewart was focused on the writing and the emotion of the film; Wayne was focused on looking as cool as possible for the audience. Was one better than the other? No, I wouldn’t say so. Both knew exactly what their respective audiences wanted and they gave them exactly that. People came to see John Wayne to see “The Duke,” the coolest guy around. People came to see Jimmy Stewart because he was an ordinary guy like them who could harness emotion like none other.

The relationship between Ransom Stoddard and Tom Doniphon reflects the differences between the two actors. Tom Doniphon is the cool cowboy who doesn’t care for much except for the woman he’s courting. The whole town knows who he is and they know that they can count on him to help them out of any situation they find themselves in.

Ransom Stoddard is a newcomer to the town with a naïve nature that endears people to him. He wants to do good in this world and he doesn’t necessarily get along with people like Doniphon who just take what they want.

Both men are known by the town for their respective personalities and for the talents they possess. Though they are pretty different in demeanor, the two men find themselves in the same place and have to rely on one another to fight their demons; just like their characters, John Wayne and James Stewart have to team up to create this iconic Western, contributing their individual talents to the project.

What Brings Them Together

John Wayne and James Stewart were both known for the great Westerns they starred in. They knew their way around a horse and a gun and audiences loved that. Their acting styles differed significantly, but that didn’t deter audiences. They both contributed something to the Western genre that shaped it for future cowboys like Clint Eastwood and Sam Elliott.

This is the same way that their characters come together to rid their little town of the menace that is Liberty Valance. Stewart’s character Ransom Stoddard stands up to the bully, but refuses to engage in violence until there is no other option left. Wayne’s character Tom Doniphon has differing opinions on how to handle the bully, but he stands aside to let Stoddard fight his own battles, only jumping in when absolutely necessary.

Both actors know to let the other do their own thing. They’re both professionals and know how to act. That is reflected in their characters who realize that they are both men that know how to handle themselves. They work in tandem to create the film and defeat the bad guy, despite their differences.

Thank you for reading! What are your thoughts on The Man Who Shot Liberty Valance? Comment down below!

One of my fave Westerns!

‘The Man Who Shot Liberty Valance’ had a very dark aspect to it that was hard to square with Wayne’s absolute personification of what it was to be an American: he shot a man in the back unawares. He bushwhacked him. He murdered a man “for the greater good”. I suppose you have to look at it as Lee Marvin’s character was sure as hell going to murder Stewart’s character, so I suppose you could extrapolate that out to “stopping a crime”.