Here’s another movie that’s finally being released in more theaters, the musical entitled La La Land!  The movie has been receiving a lot of buzz lately from early screenings from critics and has already been nominated for a ton of Golden Globe awards including best picture, best actor, best actress, and best director.  Naturally, I had to find out for myself whether the movie lived up to the hype.  The following La La Land review will be spoiler free.

The film is set in present day Los Angeles and depicts each main character struggling to make it big in a city that is infamous for crushing dreams.  Gosling plays a jazz pianist named Sebastian who is struggling to make ends meet in a dying medium while Emma Stone plays an actress named Mia who is having problems landing roles and feeling valued in a cutthroat industry.  Their paths intertwine as they attempt to follow their dreams while still staying true to themselves and their core values.

Gosling and Stone have already made their marks in previous films as a very infectious onscreen couple with palpable chemistry.  My favorite dual performance of theirs was in Crazy, Stupid, Love.  The film really played to their strengths allowing for Gosling to be the suave man that he is while also giving Stone room to show her quirky sense of humor.  They just have a certain connection about them in film that just makes you smile.  They play super well off each other and come off as a genuine couple.  With such a history together, one could only expect them to bring another great performance to La La Land.

However, I was intrigued to see how’d they perform in a musical.  It adds another layer to their onscreen relationship.

The director of La La Land, Damien Chazelle, is a fascinating person as well.  You may know him for directing one of the best movies of 2014 in Whiplash.  The man is only 31 years old and he’s already more accomplished in Hollywood than most with multiple award nominations to his credit already.  He obviously has a love for music with Whiplash surrounding Miles Teller as a drummer and La La Land being a musical.  His love for music is a refreshing change from many movies these days. 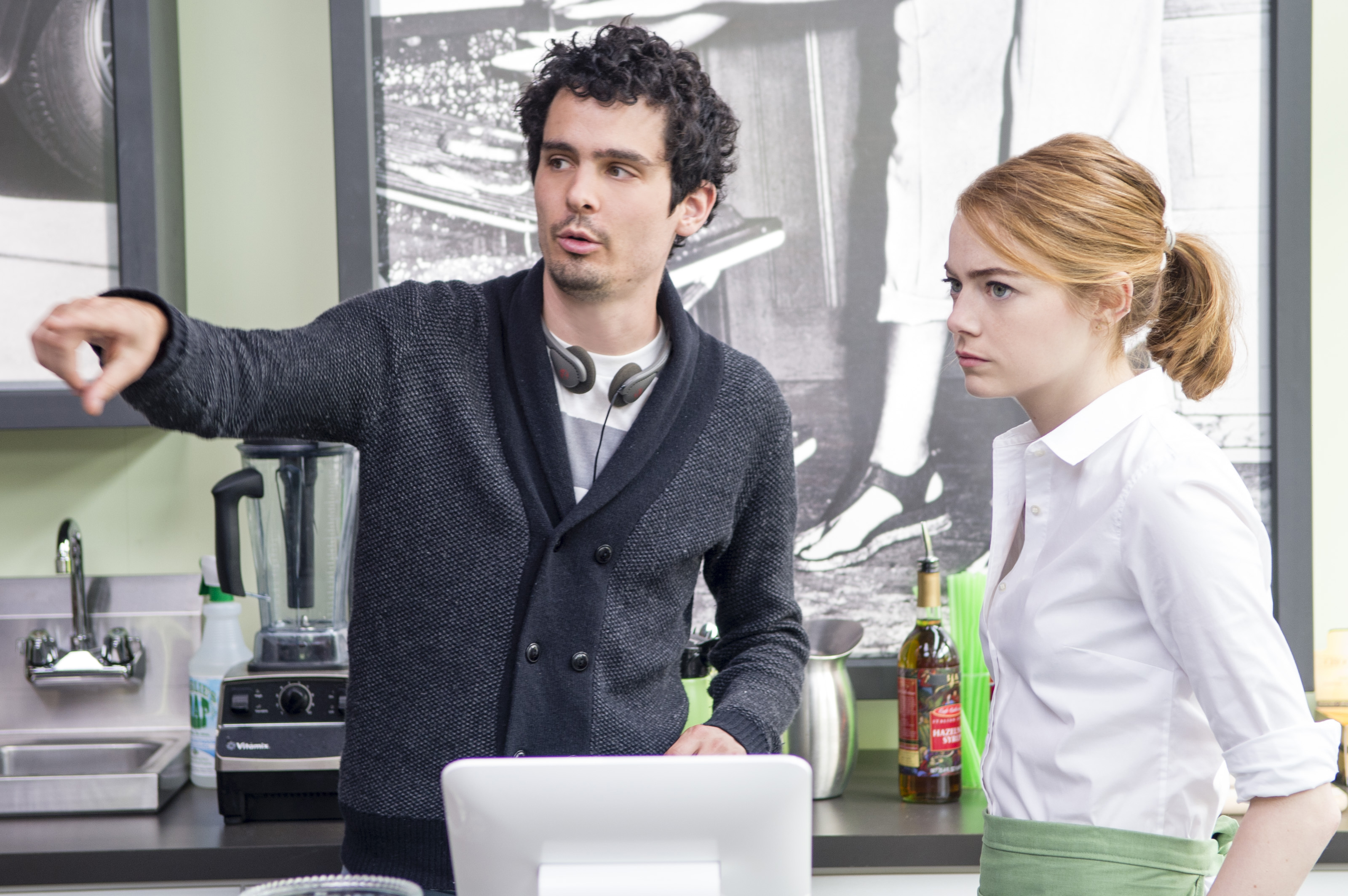 I was very interested when I first heard of La La Land.  I’m actually not a musical fan, but when you add this much talent to a property I’ll get excited by any premise or movie structure.

I’m very happy to report that after seeing La La Land, I can confidently say that it is worthy of all the praise and may also be one of the best movies of the year.

Damien Chazelle is my current front runner for the best director Oscar.  Not only is every musical number expertly choreographed, but the story is also told cleverly.  He employs very long takes in both scenes of dialogue and singing which makes for some very well-crafted moments.  Each one allows you to take in all the beauty of Los Angeles.

La La Land is a gorgeous movie as well.  Vibrant colors ooze off the screen and make every scene pop.  I really liked how the color palette of each scene match with the tone set by the actors and their dialogue.  It’s a very subtle way to express to the audience how to feel in a particular moment while not coming off as manipulative.  The visual style of this film has a great dual feeling of being both nostalgic of the golden ages of Hollywood while also adding a present day flair.  This movie has a distinctive style that we hardly get to see.

Gosling and Stone are both at the top of their games.  They bring the typical fun and whimsical nature that we have grown accustomed to while showing some serious singing chops along the way.  They will both absolutely be nominated for best actor and actress.  La La Land does not work without two great lead performances.  I really enjoyed how passionate both their characters were about their crafts.  You really got the sense that both Gosling and Stone were starving artists.  They act as each other’s rock, continuously telling each other to pursue their dreams despite what others may say.

The writing of La La Land (also done by Damien Chazelle) is very solid and tight.  Many musicals rely on catchy tunes to distract audiences from a lackluster plot.   However, the script of La La Land is very nuanced and contains many great themes.  Not only did I enjoy La La Land‘s emphasis on pursuing one’s dreams and the difficulties that come with them, but it also has a lot to say about Los Angeles and Hollywood as a whole.  At one point you may feel that La La Land is converging on a very cliched ending with very played out character arcs.  However, the movie takes a refreshing left turn that leads to a very satisfying ending.

I would be amiss if I did not discuss the musical numbers themselves.  As I write this La La Land review I’m still humming moments of songs.  The tunes are very catchy and have really sweet messages underlying them.  Chazelle has some really neat fantastical elements that he uses in some of the songs that create a lovely whimsical tone to the movie.  The main theme of the movie is a lock to be nominated for best original song.

La La Land is a refreshing, delightful achievement in cinema that has the ability to convert even the harshest musical critics with tight storytelling and strong characters.  La La Land gets an A+.  It certainly deserves the praise it is receiving.

Thanks for reading my La La Land review!  Have you seen La La Land?  Comment at the bottom of the page and let me know your thoughts!

[…] by Your Name transports you to Italy during the 1980s. With a hazy glimmer over the screen, Italy becomes mesmerizing in an instant (an enchanting soundtrack adds to this […]

I love this movie. I am a fan of classic musicals with over the top sets and gaudy costumes. So when I saw La La Land and heard the opening number I was excited; this modern rendition of a musical took a classic feature of old Hollywood and added a modern twist.

Totally agree! You know a movie is great when there’s a secondary backlash to the film filled with haters because people love the movie so much lol

I told people this is a cheesy musical reminiscent of old Hollywood if you don’t like that this movie is not for you, but if you do it’s like Another Day of Sun has been provided to the musical. :)

I’d say it’s certainly for me. It’s the one awards movie that I’m looking forward to watching over and over again!

I agree. For me there really is something magical about the movie, the music and the story. It really made me happy watching it. It provided me with a renewed sense of dreaming and being a dreamer.

Totally agree. At the end of the day, that’s all a movie should do, instill you with a nice message or moral

Brilliant!! Spot on review! Interestingly, as I was reading it, I recognized words and word phrasings that were almost exactly as I had written. We definitely agreed about this film and the power this film has.

Although the opening number felt slightly out of place in context of the plot, I adored just about everything related to the relationship between Ryan and Emma. That dinner scene? Heart-breaking. The ending? So beautifully done.

Although the opening number felt slightly out of place in context of the plot, I adored just about everything related to the relationship between Ryan and Emma. That dinner scene? Heart-breaking. The ending? So beautifully done.

I saw this movie and loved it. Totally agree with this review!

Why The Room/The Disaster Artist is a Sad...