‘Disturbing the Peace’ is So Bad, It Makes Me Re-examine My Life Choices 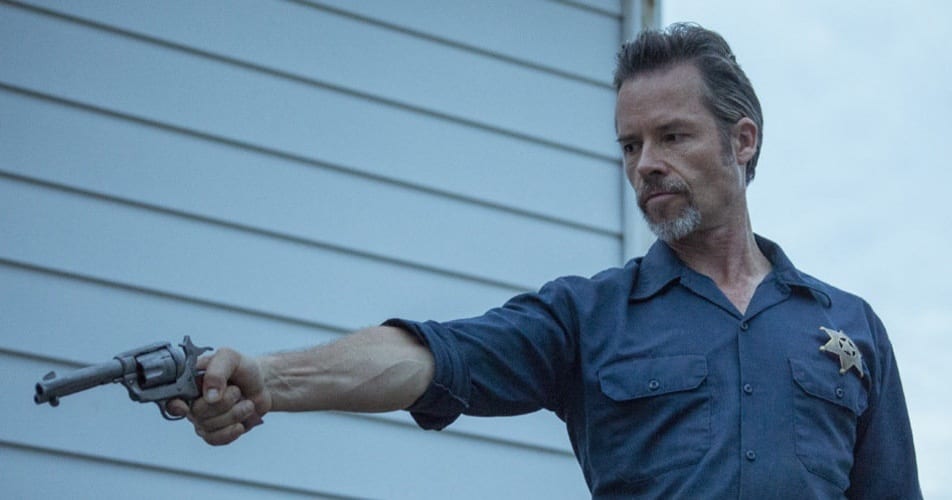 When I saw Disturbing the Peace on a list of upcoming movies, I thought it was going to be an adaptation of Richard Yates’ titular novel. The ending of the novel was particularly haunting. I always thought it could be the basis of a great novel, as Revolutionary Road has been. But instead of being an examination of one man’s mental breakdown, 2020’s Disturbing the Peace turned out to be nothing more than simple action B-movie. A neo-western in which a marshal must protect his town against a group of murderous bikers.

As my fellow MovieBabble compatriots well know, I do have a fondness for schlock. A good B-movie can warm the cockles of my heart. This film might not be an adaptation of a beautiful novel, but it could still have been a lot of fun.

Not to mention it stars Guy Pearce as the badass sheriff. Pearce has proven himself in a multitude of genres and he never shies away from a challenge. I’ve always like that about him. Considering his good looks, he could have easily picked easier roles for himself. Instead, we’ve seen him play a series of unforgettable characters, such as a sadistic Dutch preacher in Brimstone — his Dutch accent is particularly brilliant in that one; a wandering outlaw in The Proposition; a young transgender in Priscilla: Queen of the Desert; an effeminate psychopathic U.S. Marshall in Lawless; or my personal favorite, an obsessive loner traversing an apocalyptic wasteland in The Rover. Pearce would actually be an excellent candidate to portray the lead character John C. Wilder from Yates’ original novel.

My thinking was that considering Pearce’s track record, this film might have something special to it. Pearce will surely elevate its material.

Then the movie started. And within half a minute, I knew this was going to be painful.

So What’s It About?

Pearce plays Marshall Jim Dillon in a small town known as Horse Cave. Before, he had been a dedicated Texas Ranger but he left this profession after he accidentally shot and killed his partner in an arrest gone wrong. In his free time, he mopes and drinks a little too much. He still receives the respect of his loyal deputy (Michael Sirow) and still manages to smooch around with bar owner (Kelly Greyson).

Due to his guilt, Dillon refuses to wield a gun. But eventually, he will have to as the town is suddenly beset by a group of criminal bikers led by Diablo (Devon Sawa). The bikers have devised a master plan to rob the local bank and will kill anyone who gets in their way. Will they get away with it or will Dillon stop them all? Truth be told, once the plot kicks in, you’ll likely have stopped caring.

Disturbing the Peace is already lost in the opening, in which we see a poorly rendered CGI muzzle flash. I’m used to seeing computer-generated muzzle flashes, but this looked really bad. Without meaning to be cruel, it looked like something any amateur could create on his computer.

The effect is lost not just by poor special effects but by how the actors are directed. Any time a character shoots a gun, they are directed to move their wrist, as if they are dealing with recoil. Perhaps the director thought it would give the scene some realism. Instead, it makes the bad effects ever more noticeable.

The action scenes are actually the worst part of this film. The choreography is laughably bad. Characters just stand around as bullets are whizzing past them. In one of the early shootouts, one of the bikers in the background is hilariously moving back and forth for some reason, and I’m honestly not sure why. Everything just looks false. Even the way they are holding their guns is unconvincing.

Besides the muzzle flashes, there’s the unconvincing CGI smoke to boot. There are a few blood squibs though, I’ll give the film that.

Besides the shootouts, there are also a couple of fight scenes and unfortunately, they aren’t much better. An early fight scene in a bar with Kelly Greyson has so many quick cuts that any skill these performers might have had is completely lost.

Look, I want to be fair here. I honestly did not expect much from the movie. I just wanted some harmless, pulpy fun. It’s low-budget, so I understand it had its limitations. But it seemed like all of the money went to paying Guy Pearce’s salary.

Besides the cheap effects, everything about this film screams low-budget. The supposed small town seems to have a population of about twenty people. The streets are also noticeably deserted.

The acting from supporting cast — besides Devon Sawa who like in The Fanatic does what he can with the material — veers from passable to cringe-inducing. Granted, the material isn’t that good to begin with. The director is oftentimes as much to blame as the actor for the performance, if not more.

If you’re going to see it, which I wouldn’t advise, at least you’ll get some laughs out of the hokey and stiff delivery from its supporting cast.

I Should Have Been Watching The Lighthouse Instead

Besides The Lighthouse here are a few other acclaimed films I haven’t seen yet: Parasite, The Nightingale, Uncut Gems, Marriage Story and Little Women. I know. There’s something deeply wrong with me.

I really need to re-examine my life choices.

If anyone comes out unscathed from Disturbing the Peace, it’s Guy Pearce. Despite everything, he genuinely delivers a decent performance. I’m not sure what attracted him to the performance — besides money, obviously — because the role seems tailor-made for a different performer, like some third-rate Jason Statham.

He gives the character a genuine sense of pathos. It’s a role he probably sleepwalked through, but it’s a testament to his talent that he’s still so good.

The best scene is close to the beginning, in which he talks about the shooting incident that killed his partner. In one of the few good directorial choices, the camera lingers close to his eyes, so we can observe the glint of grief there. It’s a character that suppresses his emotions, someone that’s hiding a great many demons. Nothing like that is in the script, it’s all thanks to what Pearce imbues on screen.

Unless you’re a Guy Pearce groupie do not waste your time. I hope this is the worst movie I’ll see this year, but I sincerely doubt it…

Thank you for reading! What are your thoughts on Disturbing the Peace? Comment down below!

What happened to Devon Sawa after ‘Stan’? Did he anger a witch or something?