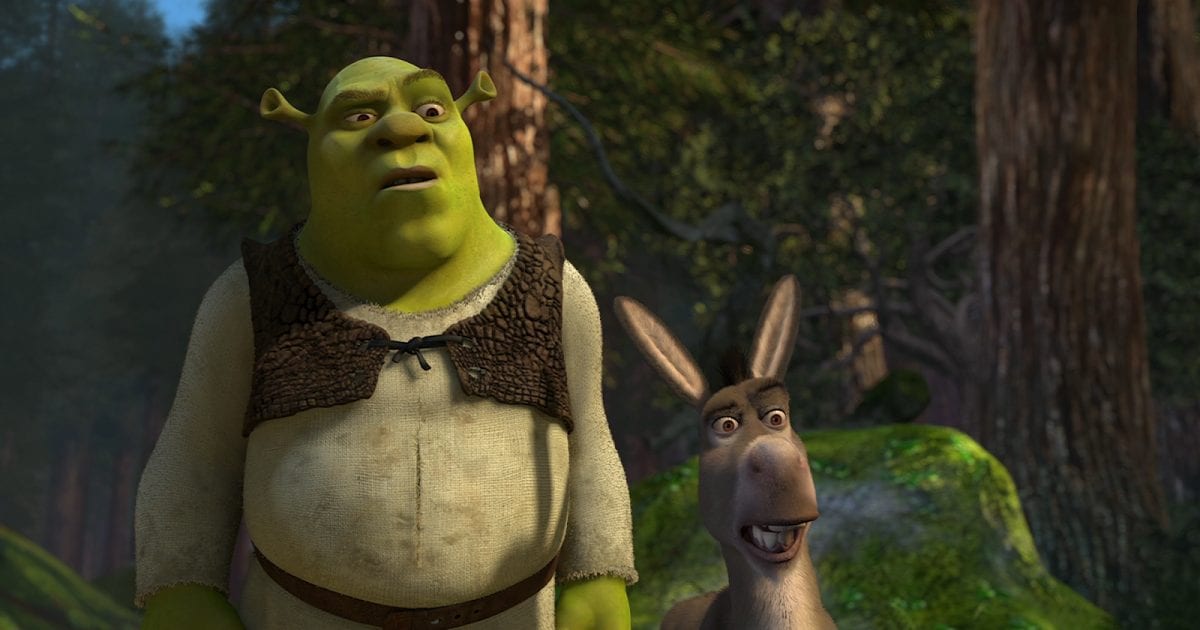 Another Tuesday means another reader requested review!  This week’s request comes from @Chizitzz on Twitter and is the movie behind a lot of recent memes, Shrek!  Although the film is now more popular on the weird part of the internet than in the general public consciousness, the film was a game-changer during its time on the big screen.  But what about the film is so appealing?  The following review will be spoiler free.

We follow an ogre named named Shrek (Myers) that is content within the solitude of his swamp.  However, fairy tale characters begin to move into the area after Lord Farquaad (Lithgow) banishes the characters from their kingdom.  In an attempt to regain his peace and quiet, Shrek makes a deal with Lord Farquaad and sets out to rescue Princess Fiona (Diaz) because of it.

Although Shrek and sidekick Donkey (Murphy) encounter all sorts of hardships on their journey, the relationship that grows between Shrek and Fiona (as well as Fiona’s dark secret) are what truly gets them into trouble.

Believe it or not, Shrek was in development for a decade before the movie was actually released.

Originally, Steven Spielberg was going to direct the film after he bought the rights to the book off of which the movie is based in 1991.  Under his vision, we would have gotten Bill Murray as the voice of Shrek with Steve Martin playing Donkey.  However, these plans quickly fell through, allowing Jeffrey Katzenberg to purchase the rights quickly after he co-founded Dreamworks at the end of 1994.

Early sketches of Shrek’s house were actually created through Photoshop in 1996 and 1997, giving time for computer animation to catch up to the film those involved were trying to make.  The scenery in the film required much planning and study of existing buildings and locations in order to perfectly capture the feel of this hybrid fairy tale world.

So, before you tweet that next weird meme of Shrek, do remember that a lot of work actually went into this film.

There’s a lot to love about the first installment in the Shrek franchise.  From a broad perspective, there’s something to admire about this film’s sheer creativity and imagination.

Shrek is chock full references to just about everything.  From your favorite fairy tales from your childhood to even a nod to The Matrix, it’s clear that the film had a lot of quirky minds working on the project with limited studio interference.  Praise should be given for a studio working so perfectly together on such a strange concept.

What makes this claim even better is that Shrek‘s story still feels streamlined enough to work as a film despite the pop culture references.  Under lesser guidance, Shrek could have devolved into an annoying, lazy copycat of other great properties without adding anything inventive to the mix.  in this hypoethical version of the film, it could have easily become disjointed akin to DC’s Suicide Squad.

Although it sometimes utilizes member berries to win over the audiece, there’s still a ton of heart that anchors this movie.  In addition to having time to make references to A Christmas Carol or The Dating Game, Shrek anchors itself by providing believable relationships that have since become quite memorable.

The best relationship in the film comes from Shrek and Donkey, voiced expertly by Mike Myers and Eddie Murphy.

Every so often, actors get placed in voice roles that are absolutely perfect.  This film contains two instances of such an occurrence.  Myers and Murphy are spot on in each of their roles.  I like to think I speak for most people when I say that I could not imagine anyone else playing these parts.  Similar to Ellen DeGeneres as Dory, these actors could never be replaced.

Not only do their voices allow for some great comedy, but they also provide for most of the film’s heart.  Through their interactions, a believable bond slowly forms.  Amidst all the chaos and absurdity, we still focus on these two no matter the circumstance.

In essence, Shrek is a buddy movie.  While romantic relationships grow along with this relationship, we’re excited for the journey with these two characters because they are so charming and likable together.  The ride is so much fun because we love their dynamic.  Watching these two bicker about every little detail never gets old.

If nothing else, this animated feature proves that Myers and Murphy are amazing talents in the industry.  Hopefully, they return to make more films very soon.

However, Shrek unfortunately is somewhat stilted by a generic story and message at its core.  Essentially, this animated feature is another repackaging of the adage “don’t judge a book by its cover.”  While Shrek is undoubtedly very, very clever, one can’t help but think of other animated films that predated this film with the same theme that have done it better such as Beauty and the Beast or The Iron Giant.

That being said, there’s way too much fun and heart from this animated feature for it to be dismissed.  It is still incredibly entertaining in its own right.

Although Shrek can’t help but be somewhat generic, there’s no doubt that it’s charm and quick wit are appealing enough to overcome a lot of its faults.  It is a strange movie, and it deserves all the credit in the world for being so odd.  It gets an A-.  For anyone that loves fairy tales, Shrek is an excellent riff on those classic tales interwoven into a streamlined story.  Go check it out if you haven’t already!

Shrek is love, Shrek is life. 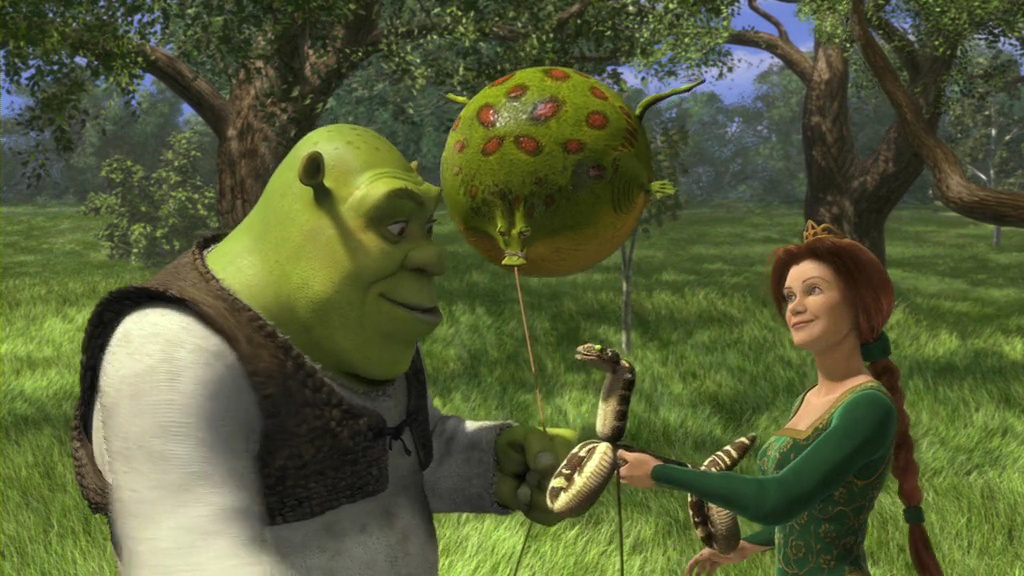 image via Mumby at the Movies

Thanks for reading!  What are your thoughts on Shrek?  What other films do you want reviewed?  Comment down below!

[…] mourn the days when Eddie Murphy wasn’t headlining forgettable family comedies, or playing a talking donkey for the umpteenth […]

[…] 2000 adaptation of the 1976-1981 television series Charlie’s Angel’s. Starring Drew Barrymore, Cameron Diaz, Lucy Liu, and Bill Murray, it was a modest hit when it was released into […]

[…] Catfish makes us aware of the real risks of online dating (and online interactions in general). Movies and books may paint love to be this magical and fairy-tale concept, but in the real world, we can become blinded by love. The picture you paint of an online persona […]

I forgot to mention I would like the Lion King reviewed too.

I actually have a review up for Captain Underpants already! But I’ll certainly add those other ones to the list!

Great. Can’t wait for the review.

While I like it a bit more now, I’ve never really been a fan of this film or the franchise.

I had to follow the link to “member berries” to see what the heck they were, lol!

lol I’m a massively South Park fan so I just had to throw them in there!