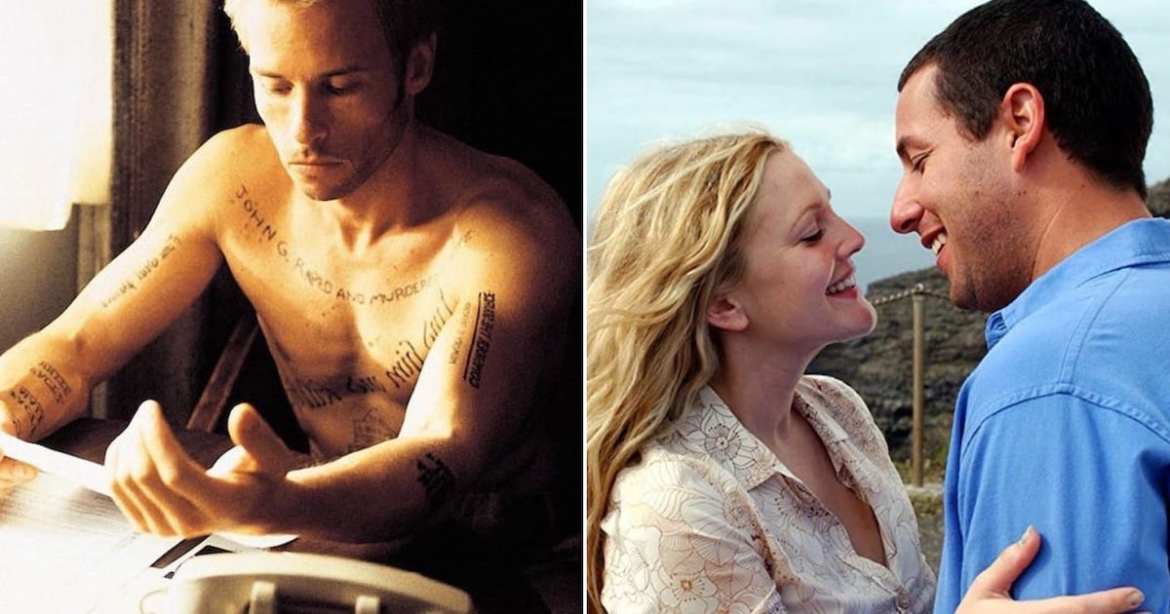 On the surface, Memento and 50 First Dates don’t have much in common except for their main plot device of short-term memory loss. Even digging a bit deeper, it’s hard to find the connecting thread between the two. Yet, they may be more similar than you initially realize.

As I rewatched Memento this past week for its 20th anniversary, 50 First Dates kept coming into my mind. Not only the similarities, but the striking differences in how the subject of short-term memory loss is approached. You’d be surprised by the comparison one can make between a mind-bending Christopher Nolan drama and a goofy Adam Sandler vehicle.

Let’s start with the easiest comparison to make: their explorations of short-term memory loss. Leonard (Guy Pearce) in Memento develops short-term memory loss after the traumatic murder of his wife. Lucy (Drew Barrymore) develops the condition after a car accident. Yet, the way that both characters cope with this disability is quite different.

Leonard chooses to work with his disability to ultimately find the man who murdered his wife. He leaves countless notes and takes numerous photographs of things he wants to remember. Then there’s the tattoos — talk about commitment. The thing most people remember about Memento is the fact that the character tattoos bits of evidence all over his body so he can track down the murderer. Pretty ingenious, though it may be taking it a bit too far.

Lucy, on the other hand, doesn’t really cope with her disability until meeting Henry (Adam Sandler). Before they meet, Lucy’s family chooses to relive the same day over and over since Lucy doesn’t remember. It isn’t until Henry comes into her life that they find a way to let her live freely, by documenting things with video evidence.

Both of our main characters eventually learn how to cope with their disability and become functioning adults. The power of writing things down and documenting them becomes essential to their daily lives.

It works for both Memento and 50 First Dates. While it may be easy to make light of short-term memory loss, especially considering its portrayal in pop culture staples like 50 First Dates and Finding Nemo, Memento takes a step in a different direction. It portrays the less made-for-TV approach to the disorder and the stress, pain, and anxiety it can cause the sufferer. Of course, 50 First Dates also has its more dramatic moments, but it generally has a light mood throughout. It is an Adam Sandler movie, after all.

Lucy and Leonard are polar opposites in character. Leonard is well aware of his condition and the situation he finds himself in. Lucy, on the other hand, has no idea about her condition and to her, she is living a normal life. Leonard has found ways to deal with his condition; Lucy doesn’t cope because she doesn’t know.

A lot of Leonard and Lucy’s personalities come from their interactions with others. Leonard is forced to face his condition and fake normality because no one around him is coddling him. The only person who makes any effort to help is Teddy (Joe Pantoliano), and even he is pretty flippant about Leonard’s memory loss.

Lucy’s entire town and family coddle her. They relive the same day every day because her condition doesn’t allow her to remember anything past that. Instead of writing notes or patiently explaining things to her, they just choose to let her live her life in ignorance.

Therein lies the biggest difference between the two: Lucy has a support system and Leonard doesn’t. That alone sets the two apart and defines who they are as characters.

One of the biggest differences I noticed from Memento to 50 First Dates is the setting. 50 First Dates is set in Hawaii, so it’s sunny and picturesque throughout the film. Even with the harsh reality of Lucy’s memory, the film never strays too far from lighthearted simply because of the setting.

With Memento, it’s easy to get depressed. Leonard’s story takes place in the outskirts of San Francisco. San Francisco itself is honestly a beautiful city, but that’s not the picture that Christopher Nolan paints in Memento. Instead, we see rundown motels, tacky diners, and mostly empty stores. It screams at you that this is not a feel-good story about a man regaining his memory.

Really, it’s a way of highlighting the difference between comedy and drama.

Two Sides of the Same Coin

Memento and 50 First Dates both examine the same phenomenon, but they do it in very different ways. 50 First Dates takes the comedic approach, choosing not to highlight some of the more painful aspects of the condition. Memento takes a dramatic approach and makes the condition more of a seemingly insurmountable obstacle in a man’s journey to find a killer.

Yet, they both offer some insight into what it is like to live with a disability such as this. It can be extremely difficult, but there are ways to cope. Like any good movie, Memento and 50 First Dates offer a glimpse into someone else’s life.

Thank you for reading! What are your thoughts on Memento vs 50 First Dates? Comment down below!

“What’s In the Box?”: Analyzing the Mystery Box