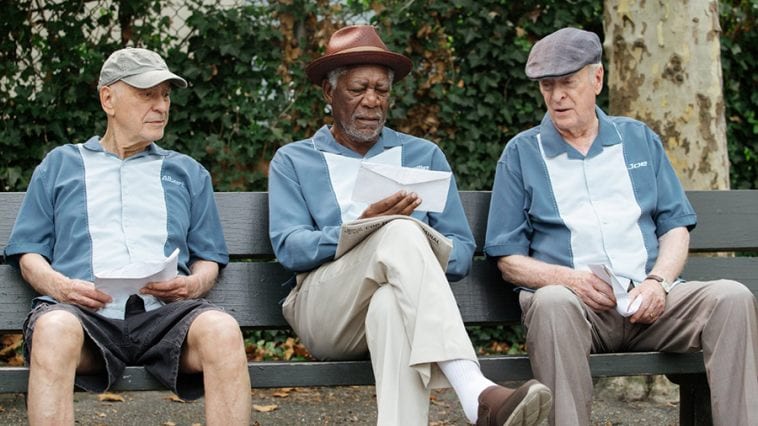 The major release this weekend is a movie filled with older stars, Going in Style!  This comedy starring Michael Caine, Morgan Freeman, and Alan Arkin shoots to be a crowd-pleaser.  But was I stirring in my seat waiting to leave or chuckling at the geriatric hi-jinks?  The following review will be spoiler free.

Going in Style is directed by Zach Braff and stars the aforementioned Michael Caine, Morgan Freeman, and Alan Arkin.  We find our leads down on their luck. The company they worked for for years has frozen their pension payments, leaving them all broke and desperate.  However, Joe (Caine) hatches a plan to rob his bank after seeing it done to perfection firsthand.  Although Willie (Freeman) and Albert (Arkin) are a little apprehensive, their circumstances give them no choice, leading the three to delve into a life of crime.

The trailer for Going in Style appeared to be scrapping the bottom of the barrel as far as comedy goes.  The movie seemed to showcase a ton of old man jokes where we would laugh at our three elderly stars for being advanced in age.  Obviously, this concept did not make this critic excited to head to the theaters.

But, the more I thought about it, the more I changed my tune.  The director, Zach Braff, is an established director and known for his sweet, charming films like Garden State.  With Going in Style, we could be in store for charming little film that tugs the heartstrings.  Moreover, the script was written by Ted Melfi, fresh of his Oscar nomination for Hidden Figures.

As I sat down in my seat and prepared for the film with all the 60+ year old grandparents who were excited to see the film, I thought to myself that this might not be the worst movie I see this weekend (looking at you Smurfs: The Lost Village).

image via My Teen Guide

Michael Caine, Morgan Freeman, and Alan Arkin have tremendous chemistry throughout the entire film.  Although Going in Style resorts to comedy previously mentioned, our three leads have enough wit and charisma from plenty years of experience in the industry to have some genuinely funny moments.

In a movie like Going in Style where the coming attractions don’t look all that great, I get worried that the stars may just sleepwalking through the film in order to collect a paycheck,  but I’m happy to report that this is not the case.  These three elder statesmen feel as if they’ve been friends for years (which their characters have been in the film).  I found myself smiling a lot at their banter, which is more than I can say more most films I see these days.

You feel a realistic connection to these characters.  Although the film is incredibly obvious about trying to tug at your sensitive side, some of it is pretty warranted and has a heartwarming effect on you.

Also, Christopher Lloyd, from Back to the Future fame, steals the show in a smaller role as a man who has the worst case of Alzheimer’s that you could imagine.  Some may find it a little ridiculous, but it had me laughing hard at points.

If you’ve seen any movie with a similar premise, then you know the basic plot of Going in Style.

You can tell that Zach Braff and Ted Melfi weren’t trying to reinvent the wheel with this film, but they stuck to the usual tropes that a comedy about older people contains.  Each of them loses their pensions to a large corporation, have family to care for, and have their own set of ailments to handle.  There’s nothing new with Going in Style.  So, if you enjoy this film, it’s mostly likely due to the fact that you like the three lead characters.

I give Zach Braff a lot of credit for giving this film a fun, snappy tone that is definitely will play to its intended demographic.  But some of the ways in which he edits this film together felt very manipulative.  Like any other heist film, Going in Style is quickly edited in combination with the time flashing on the screen.  These moments, while a little recycled, are very competent.  However, there’s a moment in the film where the film is edited in such a way in order to fish for some quick tears that I felt was unnecessary and only played with people’s emotions in the theater.

Playing off of this same idea, there are few pointless side-plots that are frivolously thrown into the story that add nothing to the plot.  These moments are also only there to make the film have an emotional punch.  I’m more than willing to have films full of heart, but they need to feel organic and real.  Neither of these traits is apparent in Going in Style. image via US News in Photos

However, despite its faults, there’s something about Going in Style that makes you smile.  It’s a lighthearted film that you can watch on a lazy day and enjoy yourself.  While you may not have to rush out to the theater to see it, Going in Style makes for a good time that won’t cause you any harm.  Sometimes, that’s all you need in a film.

In the end, Going in Style has some great moments, largely from its three iconic leads.  And while it may not be the most imaginative or clever film in the world, you’ll leave the theater with a sense of happiness.  It gets a C+.  And if that doesn’t persuade you, well it’s probably a better film than Smurfs: The Lost Village, so there’s that.

Thanks for reading!  Have you seen Going in Style?  Respond to the poll and comment down below to let your thoughts be heard!