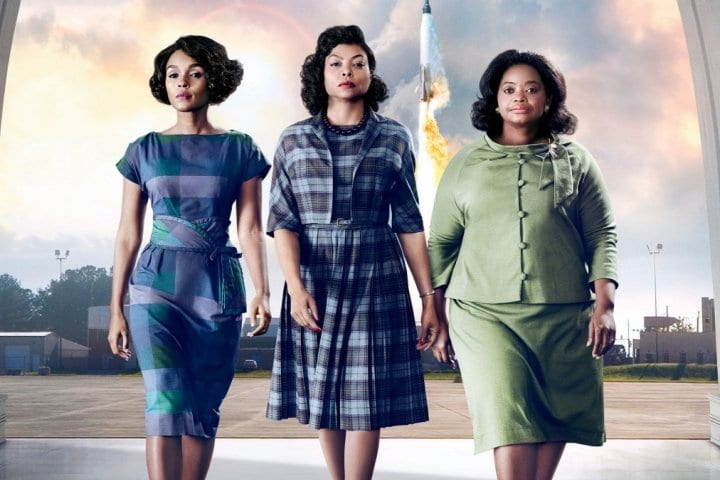 In an attempt to escape the typical sub-par movies we see in January,  I had my fingers crossed that Hidden Figures would live up to the impressive 93% it currently holds on Rotten Tomatoes.  The film had a few nominations at the Golden Globes.  So, I was hopeful to find some enjoyment out of this movie.  The following review will be spoiler free.  Be sure to comment at the bottom of the page with your own thoughts on the movie.

Hidden Figures is directed by Theodore Melfi and stars Taraji P. Henson, Octavia Spencer, and Janelle Monae.  The film depicts the untold story of Katherine G. Johnson (Henson), Dorothy Vaughan (Spencer), and Mary Jackson (Monae).  They were three African-American who were integral parts in the launch of astronaut John Glenn into orbit.  The event, as you probably know, was a key point in the Space Race with the Soviet Union.

I unfortunately didn’t get a chance to see this movie opening weekend.  It was either this film or Silence, and I couldn’t pass up the opportunity to see a Martin Scorsese movie before it opens wide in theaters.  However, one of the things that kept me from running out to the theater to see Hidden Figures was that the trailer made it look like the movie was going to beat you over the head with its message.  I must say first that I believe that this absolutely a great story to tell in a movie and there should definitely be more movies that tell such stories about history.  Films like this one are important to our culture and help to show possible issues with society.  However, when a message comes across as not subtle, it speaks to bad writing and direction.

But this idea didn’t seem to bother critics and fans alike as the movie opened to great reviews from critics.  It even stole the top spot away from Rogue One at the box office.  Once I saw these numbers come in, my reservations for seeing the movie quickly dissipated and I became increasingly excited to see the movie.  On top of the three actresses I have already mentioned, the film has some other great actors in Kevin Costner, Kirsten Dunst, and Jim Parsons that add an extra sense of confidence for the movie.

After viewing Hidden Figures, I happy to say that my concerns for the film were (for the most part) unnecessary.

I must start off by saying that the performances by the three lead women were very, very good.  Octavia Spencer gives a typical steady performance and has a touching, motherly nature to her which is much appreciated.  Janelle Monae brings a ton of life to the film with her rebellious nature that can easily have you fist pumping in your seat.  The stand out, however, is Taraji P. Henson as Katherine Johnson.  She is the heart of this film (and the center of much of the conflict to the plot).  She had an impassioned speech that almost had my jaw drop.  Henson definitely needs to be in more high profile films.

However, the story does become unfocused which does hamper the movie a tad.  The first portion of the movie is so focused with showing you its message that it forgets to propel the plot forward or have compelling dialogue between characters.  Once the movie became somewhat less preachy and simply told its story, the message of the film rang through beautifully and was truly resonant.  One can surely understand the creative team of Hidden Figures wanting the message of race relations to be front and center in the movie.  In fact, you should expect it as a moviegoer with such a premise.  But the best way to accomplish this is through a well-written story with good performances rather than the bluntness that Hidden Figures employs at times.  Once the movie allows room for the story to speak for itself, the themes shine through wonderfully and are truly rewarding. Another issue with the film is the relationship between the characters portrayed by Taraji P. Henson and Mahershala Ali.  They both act the part well.  But their interactions seems incredibly rushed and often detracts from the very interesting and intricate work that everyone is conducting at NASA in order to get John Glenn into space.  The film seems to slow to a halt every time these personal moments come onscreen.  It definitely makes sense for the movie to show the characters outside of their work in order to make a well-rounded character for the movie, but it was not done in the most seamless of ways. But I don’t want to criticize this movie too hard, because it is definitely is a rewarding movie experience.  Before Hidden Figures, I had zero idea about the story of these three woman (neither did a lot of people for that matter).  This is one of the reasons I love movies: they give untold stories an avenue to be known by millions of people when otherwise most people would have zero idea about their importance.  The movie has an ever redeemable quality to it.  It makes you feel really, really good.  You can’t help but smile during this film (some insanely catchy songs from Pharrell Williams help in that respect).  You’re definitely willing to overlook some flaws of Hidden Figures because it is just so damn charming.

So overall, Hidden Figures is a somewhat preachy.  However, it is undoubtedly a charming movie that is worth the twelve dollar movie ticket.  I’ll give it a B.  This movie has an incredible story that you should go see and support.

Thanks for reading!  Have you seen Hidden Figures?  Comment below with your own thoughts.

Nice post! I personally didn’t like how ‘Hollywood’ this movie felt (if that makes sense) but that’s probably my only criticism. I think it tackles social issues wonderfully and I am personally really happy that it was made.

I agree with your idea of it being too “hollywood,” it certainly feel a little staged

Great post thank you. This film offers feel-good entertainment while informing about a remarkable episode in history. Its also part of a wider cultural adjustment to the historical record which is mostly written by men for men. It will take decades to correct the chronicles and show the role of women in its correct light.