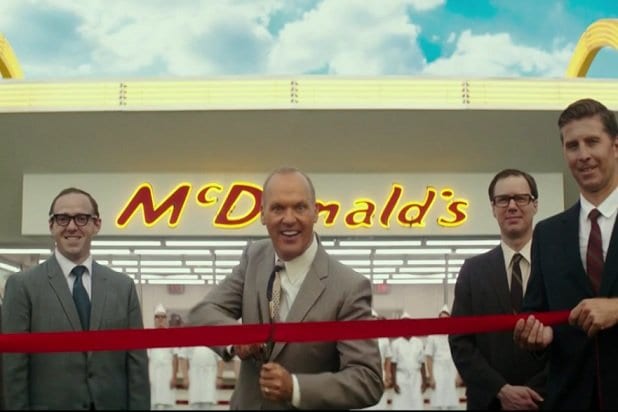 It’s late at night and you want some cheap, fattening food to fuel your stomach after a night filled with questionable decisions.  Where do you go?  Possibly McDonald’s!  But as you eat that burger with questionable meat inside it at 2 a.m., have you ever wondered how McDonald’s came to be?  If so, The Founder may be the movie for you!  The following review of said movie will be spoiler free so you can enjoy the movie for yourself.

The Founder is directed by John Lee Hancock and stars Michael Keaton as the mogul Ray Kroc as well as Nick Offerman and John Carroll Lynch as Dick and Mac McDonald.

We follow Ray Kroc as an over the hill man in his fifties who is struggling as a salesman in Illinois who meets two brothers (Dick and Mac) that run a burger joint in Southern California.  Kroc sees potential in this new speedy system for a franchise opportunity with the McDonald brothers.  However, the McDonald brothers quickly learn that they may have made a mistake by letting Ray Kroc have a piece of the pie. It’s no secret that McDonald’s is one of the biggest franchises in the world today.  It’s reach is felt in countries like the United States to lesser known countries like Bosnia and Herzegovina.  If any company deserves to have a movie made about how it came to be, that company is probably McDonald’s.  Whether you like it or not, McDonald’s was a game changer for capitalism in America, and Ray Kroc was at the center of all of it.

And what better man to put at the center of a movie than Michael Keaton?  Similar to Matthew McConaughey‘s McConaissance, we’ve had a little “Keatonssance” the past couple years as we’ve seen him in Birdman and Spotlight in back to back years and we’ll see him again in 2017 as the Vulture in Spider-Man: Homecoming.  We’ve loved him for years, and it’s really nice to see him in good movies once again.

However, while Michael Keaton shines as Ray Croc, The Founder, as a whole, falters.

Let’s start out with the positives.  The acting, led by Michael Keaton, is pretty spot on all across the board.  A couple standouts in supporting roles were both Nick Offerman and John Carroll Lynch as the McDonald brothers.  They had a really nice sense of brotherhood together while also being able to receive a lot of sympathy later in the movie for what they deal with in Ray Kroc.  But, for better or for worse (and I’ll explain why later), Michael Keaton is the star of this movie.  He’s very dynamic onscreen to the point where, even if he’s doing some pretty despicable things to people, you’re still intrigued by him.  It’s undoubtedly fascinating to see how the food empire was built through his actions.  I wouldn’t be surprised if an Oscar nomination came his way.

What I Didn’t Liked

However, and I’m most likely in the minority when it comes to this movie (evident by the 82% critic rating on Rotten Tomatoes), but The Founder falters from a fatally flawed story construction.  The movie sets up with Ray Kroc as our main character. We first see him struggling to make a living selling contraptions to restaurants which gets us all behind him to start since he’s so down on his luck.  However, as the story proceeds, Kroc gets progressively worse as a character, chasing younger, married women while ripping off two genuinely nice characters in order to succeed, all the while acting like a jerk.  How are we supposed to root for an nonredeemable character?  What type of message does that send?

We’ve seen an attempts before to follow a generally less than upstanding leading character in a movie.  The Wolf of Wall Street with Jordan Belfort is a great example.  He is definitely likable despite his flaws, but Belfort eventually gets his comeuppance for his fatal flaws and spends years in jail after years of success and later learns from his wrongdoings and attempts to help others.

However, Ray Kroc has no arc other than becoming more and more ruthless and even despicable at times.  Failing to give the audience a central character that is mostly likable can really detract from the overall enjoyment of the film.  I’m not preaching for movies to have perfect characters at the center of the drama, but they need to have characters that have some redeeming qualities in them so that they can be forgiven for their less than stellar actions.

Like I mentioned before, the story of McDonald’s should definitely be told, but I believe that The Founder would have been much more compelling as a story told from the viewpoint of the McDonald brothers so that we have someone to root for in an ultimately tragic story.  We would also be able to appreciate Michael Keaton’s performance much more in a true villain role.

The Founder is solidly acted, nicely shot, but unfortunately not as engaging as it should be.  The Founder gets a C.  My opinion will definitely be in the minority, so if you feel compelled to learn more about the development of McDonald’s then by all means go see this movie.

Thanks so much for reading!  Have you seen The Founder?  Comment down below with your thoughts!

Nice review. I’ve done so myself :)
https://moviesformysoul.com/the-founder/
Birdman serving you a Big Mac

You’re not alone – I was surprised by the high RT rating! It’s decent, but not great

A lot of people I’ve talked to about it felt very “meh” as well. I guess the rotten tomatoes score comes from it being well made from a directing/acting stand point

But can we really question Kroc’s character sketch given the fact that it was inspired by a real-life persona ? Also, the movie does give a lot to learn right ?

Im totally fine with his portrayal by Michael Keaton, but, in my opinion, the construction of the movie made it so you should root for him as he’s being a terrible person which didn’t work well for me

I’m going to check this out. McDonald’s is surely an intriguing story of how it came to form. I’ve never thought twice who the founders were and it’s almost blasphemy considering how much dotage I have for the plain old cheeseburger.

Considering the whole point of the McDonald brothers is that they stayed the same and never changed, making them the focus of the story would have been really boring. The movie needed to follow Ray Kroc for anything to actually happen. Definitely agree that the brothers are better and more likable characters than Kroc, but people would’ve complained about the movie being boring if we made them the main focus.

I also don’t know if I would consider having an unlikable lead character as a fatal flaw, even if the character doesn’t get his “comeuppance”.

I won’t argue with you disagreeing! Like I said in the review,I’m definitely in the minority when it comes to this movie.

Lol, well if you decide to disagree with me, and have some very valid points to bring up, you won’t hurt my feelings!

Great review! I’m still surprised there was a story to tell here but I have to say, it does sound interesting. I’m looking forward to giving it a watch :)

Despite my mixed review for it, I still think it’s a fascinating story to be told!

The Girl on the Train. That was my favorite book of all time. But the movie was slightly disappointing. But I would watch it again.

Not sure why, but I really want to see this movie. Maybe I’m just hungry.

Lol it does make you hungry with all the cooking montages!