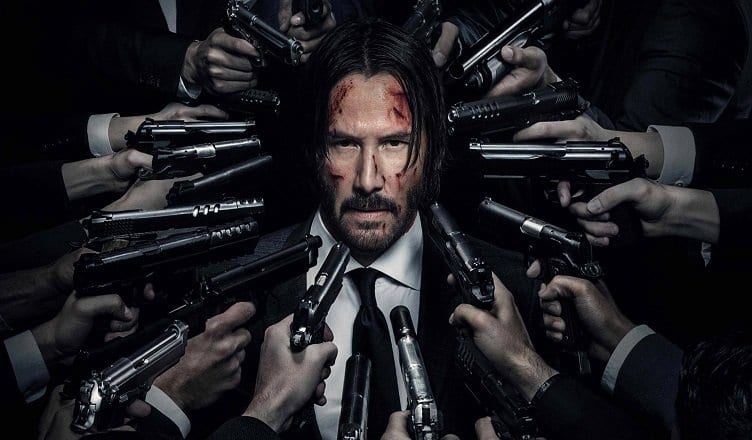 This weekend gives us the sequel to one of the sleeper hit movies of 2014, John Wick: Chapter 2!  Keanu Reeves is back as the title character and ready to shoot more people in the face over and over again, and we’ve all been waiting for him to do so.  The following review will be spoiler free.

John Wick: Chapter 2 is directed by Chad Stahelski and once again stars Keanu Reeves as John Wick along with Ian McShane as the head of the Continental.

Wick is once again taken out of retirement by an associate who is plotting to take over an international assassin’s guild.  Bound by a deal he made in the past, Wick reluctantly helps his associate which takes him to Rome where he must face off with another round of highly trained killers while a larger undercurrent becomes Wick’s greatest foe yet. The thing that people love most about the first John Wick is that it knew exactly what it was: a shoot ’em up movie with great action sequences.  The film never tried to shoehorn some bigger meaning into the crux of the movie.  It was made simply to entertain.  We haven’t had a simple action movie that was universally enjoyed for quite a long time, and John Wick certainly helped fill that void.

John Wick got a lot of its bite from expert fight choreography, spearheaded by the director Chad Stahelski along with his partner David Leitch.  Stahelski got his start in Hollywood as a stunt man and slowly worked his way up to the director’s chair for John Wick.  He obviously kept his stunt work with him as he put Keanu Reeves and other actors in the film through months of training before he and Leitch ever said “action.”

Shooting to make a film better than the original, Stahelski, now the lone director of the movie, put the actors through training again, doubling down on the hyper-kinetic action of the first film.

After watching John Wick: Chapter 2, I’m happy to say that it is exactly the the type of sequel that the original John Wick deserves.

If you enjoyed the action of John Wick, get ready to be blown away, because the sequel ups the ante in the best way possible.  Keanu Reeves deserves all the praise in the world for his stunt work.  You can tell that he worked his tail off once again to be a convincing hitman.  His work allows for director Chad Stahelski to ditch the trend of quick cutting actions scenes for long takes that allow you to see all the action onscreen and enjoy it without getting a headache.  Some actions really could’ve put Reeve’s body in harm’s way, so he must be admired for a truly grueling performance.

Building off this idea, Stahelski and Co. set up some crazy set pieces without going to absurd levels.  Everything stays grounded, in that there’s no one jumping off skyscrapers or falling from helicopters.  Rather, Keanu rumbles with baddies by using guns and fists.  It’s truly a testament to everyone involved in the movie that it could become even more insane while staying somewhat rooted in plausibility.  There are some action set pieces in this movie that rival scenes from movies such as The Raid 2 or The Matrix.  The major sequences go on for easily fifteen minutes, but you cherish every second of it.

My favorite sequence includes John Wick and a pencil.  I’ll leave it at that so you can watch it in all its glory.

For all its bloody glory, however, John Wick: Chapter 2 is not without flaws.  John Wick’s motivation for returning to the world of assassins isn’t nearly as hard hitting as in its previous installment.  It’s pretty hard to beat killing a man’s dog (which thankfully doesn’t happen this time around) that was his biggest connection to his dead wife.  Not that the plot device used this time is illogical, but it just doesn’t carry the same weight, leaving you as the viewer with less investment in John Wick’s journey.

Moreover, some of the characters that the film builds up as tough opponents for John Wick fall pretty flat.  One in particular is the character played by Ruby Rose.  Not that her acting is really all that terrible, but the film features her as a top of the line killer that John Wick will have to face in the movie.  However, her scene with Keanu Reeves may be the worst put together (and shortest) fight scene in the movie.  I was ready for a crazy brawl to break out between her and John Wick.  But, I was given a bit of a dud. John Wick: Chapter 2 is predominantly an entertaining movie that also does a great deal of world building among the bloody fights.  You get more of the Continental Hotel than you got in the first film.  But, you see the type of reach and power that the Continental and those who run it possess.  While it may get a tad ridiculous at times, it certainly sets up for more fun to come down the line while also allowing John Wick: Chapter 2 to be enjoyable in its own right.

If you enjoy action movies, then you need to go out and see John Wick: Chapter 2.  It’s what every action movie should strive to be from a technical level, giving us one of the best physical performances in recent memory from Keanu Reeves.  John Wick: Chapter 2 gets an B+.  Go support this movie instead of Fifty Shades Darker the next time you go out to theater.  It’s clearly handled with much more care and grace. Thanks for reading!  Have you seen John Wick: Chapter 2?  Comment below with your thoughts to keep the conversation going!

I saw it yesterday and can’t get it out of my head. I liked it as much as I liked the first one. Both of them have sexy action sequences and classy music. Awesome!

I can’t wait for the third one, it’s sure to be nuts after the way Chapter 2 concluded

I thought your review is on par with a professional journalist. It reminds me of reviews I used to read in the Newspapers way back when.

I am thinking that I would enjoy this sequel as much as I enjoyed the first one. Truth is, I did not think he could possibly live through that whoopin he took in the first movie.

I did not expect a sequel. But am not surprised to see one. I know that you requested that I see the movie before commenting; but I will not see it until I can watch it at home where I can pause, walk away for a few minutes to relieve myself, or replay scenes as I see fit.

You don’t to see the movie to comment! Go right ahead! Thanks so much for your kind words I really appreciate it! I already have a review of Fences up so feel free to check it out!

Good morning!! I have nominated you for the Mystery Blogger Award! Please get the details in the link I have included. Have a great day!!
https://mysideofthelaundryroom.wordpress.com/2017/02/16/mystery-blogger-award-2nd/

No problem. Really like your blog and just wanted to say thanks for the entertainment you’ve given me.

Thanks I really appreciate that!!!

Is it essential to watch the first one?

I don’t think it’s absolutely necessary, they kind of explain what happens in the first one through dialogue intermixed with an opening action sequence. It would help to understand the whole idea of the Continental Hotel, but you can easily pick that up from this one! I would however tell you to watch since it’s so fun!

Same grade for me too. Hold a gun to my head I like the 1st a tad better (stronger story), but the action is turned up to 11 here. But Rose was such a bad “big baddie.” Wasn’t funny or badass. I would have loved to see Michelle Rodriguez or someone like that.

Wouldn’t say essential, but the 1st is a great action move in its own right. And, you’ll be provided with a good foundation of this world that is expanded in depth more.

Will watch it then. Thanks!