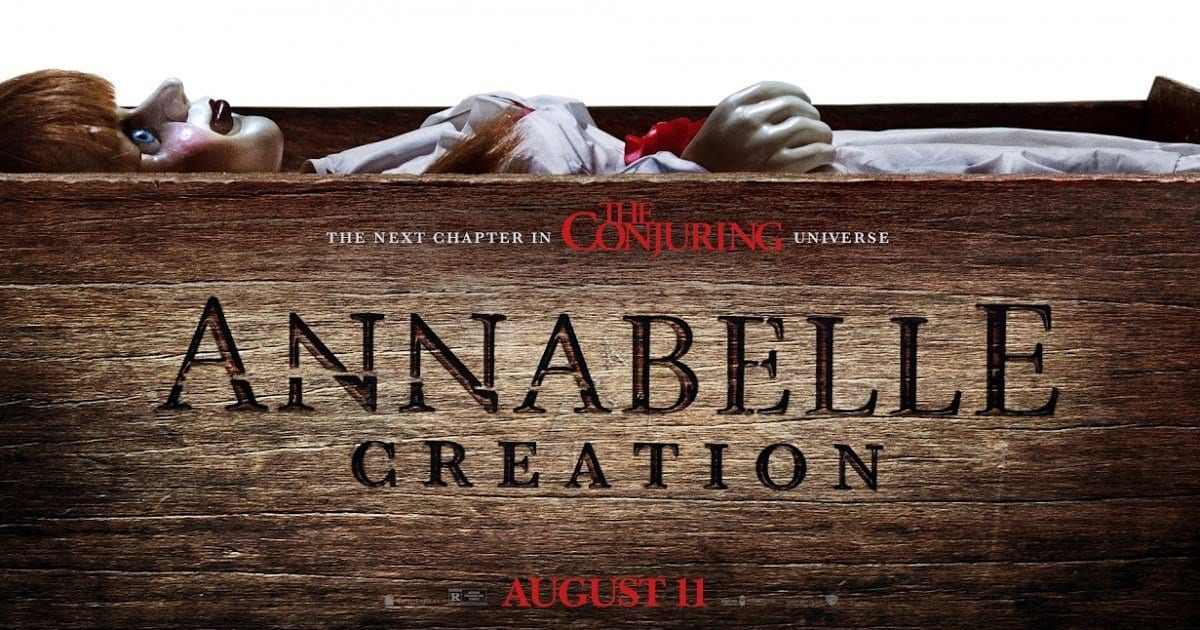 Warner Bros. has certainly found its horror franchise in The Conjuring universe.  The next film in the universe, Annabelle: Creation, looks to continue the streak of scares.  Although the first Annabelle was lackluster to many horror fans, there appears to be a renewed amount of confidence that this movie is the one to bring along a sufficient amount of doll-centered scares.  But is that optimism realized in a solid flick?  The following review will be spoiler free.

Following the tragic death of their daughter, Samuel (LaPaglia) and Esther (Otto) pray to see their daughter once again.  Unfortunately, they are visited by a much darker force.  Once they realize that this force is not their daughter, they lock it away so that it won’t be seen again.  However, as part of their personal penance, the married couple take in children from a local orphanage.  But, this may just be what the dark force needed to terrorize people once again.

Upon seeing early cuts of Light Out, Sandberg’s directorial debut, James Wan immediately approached the director about helming the sequel to 2014’s Annabelle.

Initially, Sandberg was a little apprehensive to direct the film due to his fear that it would feel generic.  However, when he read the script to the film, he was pleasantly surprised on its new take on the creepy doll.  The film’s structure allowed Sandberg to have more creative freedom during filmmaking, allowing him to utilize some special touches to this sequel.

After Annabelle: Creation, Sandberg will tackle Shazam, a superhero film that will be a part of the DC Extended Universe.  The title character is beloved by many, so a lot of people will certainly have a keen eye on how Annabelle: Creation performs both with critics and fans. The star of this film is obviously David F Sandberg.  From the first frame of this movie, you get an immediate sense of his direction style and atmosphere.  He took a lot of inspiration from The Haunting, the 1963 psychological horror film.  You can immediately sense the homage he pays to that film through the time period in which the film takes place and the hazy atmosphere that encompasses the house in which the girls live.

One of the most bothersome things about horror films these days (other than their over reliance on jump scares) is flat direction, seemingly making the movie just to make it without adding any visual flair to the equation.  Luckily, Sandberg adds some very nice touches that are both clever and terrifying.  There’s a calculated use for each shot that not only adds to the dread of each scene, but also makes Annabelle: Creation a visual treat.

There’s an attention to detail in Annabelle: Creation that is missed in a lot of horror films these days.  Thanks to Sandberg and his crew, we have a horror movie is certainly a cut above the rest.

Those remarks would mean nothing if there wasn’t any solid scares to back it up.  Thankfully, genre enthusiasts will have a ball with Annabelle: Creation as some of its content is downright horrifying.  Does the film utilize jump scares?  Absolutely.  However, the film never becomes reliant on them as it creates genuinely scary sequences that manifest from excellent building of tension and sound design.

Built out of the James Wan style, Sandberg cuts out the score at just the right second, putting you on edge until the scare finally happens.  In some cases, the actual scare won’t occur for quite some time.  This quality will put audiences members even further on edge as they watch through partially covered eyes, waiting for the demonic presence to show itself.

There’s a slow building of scares in Annabelle: Creation that only continues to ratchet the tension.  As this demon slowly takes hold in the house, scares become more and more prolific, as you might imagine.  That being said, the entire film stays interesting as Sandberg continues to subvert your expectations.  Scares occur both at night and at day.  No character is safe.

Even when you see a scare coming, you don’t know what to think as the character could be safe…or not.  As a result, you’re never ahead of the movie and must stay along for the ride.

That’s not to say that Annabelle: Creation is without faults.  For all its clever scares, the story surrounding those scares can’t help but feel generic.  Annabelle: Creation contains creepy dolls, creepy children, nuns, demons, ghosts, and lurking adults.  Any of those things sound familiar?

The film hits about every single trope that we’ve come to expect from a horror movie.  As you can expect, religion plays a serious role in this film as well.  With Annabelle: Creation‘s predecessors and its structure, it can only do so much to make itself stand out.

image via The Lineup

Moreover, there’s unbelievably dumb character choices made that need to be made in order for a horror movie to happen.  Your screening will be full of patrons exclaiming, “Why are you going in there?”  or, “Just leave already!”  There are a few moments that you just have to accept in order for the movie to unfold.  If you have to have character motivations that make complete sense, Annabelle: Creation may not be the movie for you.

That being said, for those looking to have a great theater experience that has people in the crowd yelling at the screen in fear, buy your ticket this instant.

This prequel sequel is incredibly inventive in the way it creates scares.  Annabelle: Creation will definitely have many people afraid of falling asleep the night that they watch this film.  However, for all its entertainment, one can’t help but notice all the tropes that the film utilizes.  Annabelle: Creation falls short of a modern horror classic, but it’s still pretty terrifying.  It gets a B.

If you get the chance, see this movie in a packed theater.  Annabelle: Creation is one of those horror movies that plays to a big crowd.

Thanks for reading!  What are your thoughts on Annabelle: Creation?  Comment down below!

[…] amount of attention thanks to its unusual conclusion. It managed to steer clear of the familiar ‘creepy doll’ horror tropes and was a fairly refreshing addition to the genre. That’s why it’s so […]

Hm, now I have to find a new title for my own review, lol. What do you think about the plot in general? I feel like it was a mistake to focus on the orphans — the movie is subtitled “Creation,” yet we only see the creation in a flashback. Why not make the actual movie about the events in the flashback? Why set the main plot 12 years later?

I think for the purpose of the movie it was better than just showing the beginning. Like they said in the movie the contact was really brief and fleeting at first which would have made for a pretty boring flick. As for whether the actual movie lived up to “Creation,” I think it did quite nicely showing how it tied into this Conjuring universe that is now a thing lol

I’m glad that it seems better than Annabelle which I found incredibly boring!

It definitely is! Verrrrrry creepy!

Honestly I did not expect much from this movie, but after reading this, i am definitely going to check it out. I liked both the two Conjuring parts, but the first Annabelle felt a bit like a very easy way to make a quick couple of bucks out of the succes of the previous two movies. Glad to read that this one is apparently different ? Great post!