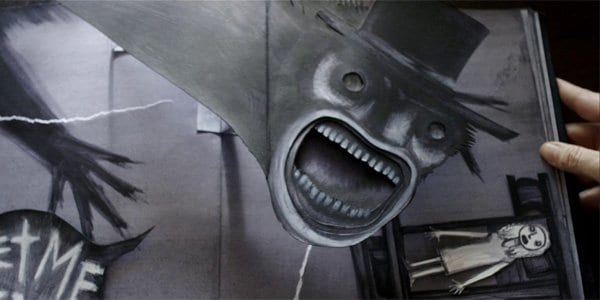 Considering the main releases this weekend are Gold (ugh), Resident Evil: The Final Chapter (UGH), and A Dog’s Purpose (UUGGHH), I thought it be nice to debut a new feature to MovieBabble, Netflix Reviews!  In this new feature, I’ll discuss movies that are available for you to stream online from your couch so you can stay in for the night rather than running out to the theater to see a movie that will mostly likely leave you wishing for your money back.  The following review of The Babadook will be spoiler free.

The Babadook is directed by Jennifer Kent and stars Essie Davis as Amelia and Noah Wiseman as Samuel.

Six years after the death of her husband, Amelia struggles to make it through the day. She is constantly disciplining Samuel and is ultimately depressed.  Our two leads run into some more trouble after a children’s book entitled Mister Babadook shows up in their house.  Once Amelia reads this book, things begin to unravel.  While at first Amelia becomes frustrated with Samuel, she slowly begins to believe his hallucinations and the true terror that hides behind them.

The Babadook had a nice rise to prominence at the end of 2014.  After staying way under the radar in Australia where it was made, the film began to get traction after overwhelmingly positive reviews from critics at the Sundance Film Festival.  The film received such high praise that William Friedkin, director of The Exorcist, exclaimed upon seeing the movie, “I’ve never seen a more terrifying film.  It will scare the hell out of you as it did me.”  That’s certainly high praise for such a small scale movie.

Speaking more to the idea of this being a “small scale movie,” it’s certainly nice to see such a small production become beloved by some of film’s most esteemed minds.  Blumhouse Productions has adopted this model of creating microbudget movies which we’ve seen just recently with M. Night Shyamalan’s Split.  Smaller movies, a lot of the time, is where a lot creativity comes out from filmmakers.  They have to be frugal with funds for set pieces and must express the films’ intended themes in imaginative ways.  With only a $2 million budget for The Babadook, I was interested to see how it’s scares would manifest on screen.

While The Babadook may not be the most “terrifying” film ever, it’s easily one of the more unsettling films in recent memory.

This film doesn’t really work without solid performances from our leads.  I enjoyed the bait and switch element of this film in that you feel for Amelia as she deals with her disobedient son at first.  But then, as the plot develops, you start to see that Samuel might not be that bad after all.  This concept really speaks to the performance of Noah Wiseman who really plays off of that initial dislike for his character to gain sympathy later on in the film, leading to the movie coming full-circle .

In that same vein, Essie Davis is absolutely the rock of this movie.  Her reactions to the madness circling in on her are truly haunting, she even reminded me of Jack Nicholson as Jack Torrance in The Shining when she finally lost it completely and lashed out towards her son.  Both characters descent into madness is a slow burn, but you as the audience slowly see the tension ratcheted up scene after scene which ultimately makes your skin crawl in uneasiness. 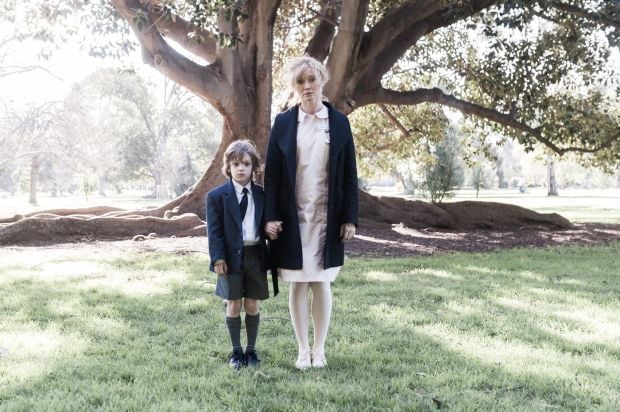 However, what really gives The Babadook its teeth is the Babadook as a monster and its implications for loss and the hold that it takes on people.  Many will watch this movie completely from the surface as a monster and still enjoy it a good amount, but those who go looking for a higher meaning will be the people who are truly in fear after watching The Babadook.

This idea of a past loss coming back to haunt you in whatever you do, crippling your mind and making you incapacitated with dread and hate sends shivers up your spine.  It’s in this idea that The Babadook turns into a real entity, making this “vessel” pertinent into our own lives.  Any horror movie that can translate to your real life definitely succeeded in its intentions.

This movie certainly takes its time to get going (and even drags at times), but the payoff is so strong and creepy that it is certainly worth the wait.  It’s really refreshing to see a movie set up genuinely unsettling scares and imagery that stays with you afterwards.  The Babadook has a masterful use of forshadowing, and its payoff in one to be appreciated.  Because of this, The Babadook gets an A.  This movie is certainly better than any horror movie currently in theaters, so get comfy on your couch at home and get ready to not sleep at night!

Thanks for reading!  Have you seen The Babadook?  Comment down below with your thoughts!

What topic should I review next?  Whether it be old or new, the choice is up to you!

[…] Ned (newcomer Orlando Schwerdt) is living with his siblings and his prostitute mother, Ellen (Essie Davis). From an early age, Ned has this toxic ideal of masculinity drilled into him from his mother. The […]

My grandchildren have been after me to watch this movie for a couple of years. “Babadook! Ooooooh!” they say, eyes wide, employing the exact same tactic I use when telling them stories. So I’ve avoided it, knowing that the thing under my bed, or down the hallway, or in the closet may just be the Babadook, waiting to grab or leap out. This review may be the straw that gets me to watch the film. But not at night. And not alone. And with the lights on. And a couch pillow at hand.

You should watch it on a nice, sunny Saturday at 2 p.m. Lol

The scariest movie I remember as a kid was The Day the Earth Ended. I went to the Center Theater with my two older sisters, and my grandmother, Gommy, dropped us off. It was one of those GOTCHA scenes that was employed by directors (and still is in horror films) when a face or hand or something suddenly interrupts a tense scene. The hero was carefully making his way through tangled undergrowth. It was a black and white film, and the lighting was dark, as though it was dusk. I had a big cup of Coca-Cola in one hand, and a box of popcorn in the other. Suddenly a hand reaches out! UP goes the Coke, UP goes the box of popcorn, and OUT I go of the theater, screaming all the way to the ticket booth lady, yelling at her to “Call my Gommy!” My older sisters came steaming out of the theater after me. Years later, during a red wine-induced confession session with them at the beach, they both admitted how glad they were I did what I did. Not so sure about the people sitting close-by who were showered with Coke and popcorn.

Haha! That’s hilarious! I can’t say there’s any moments like that in The Babadook, however. It’s more of a film that gets underneath you skin and is unsettling rather than completely scary.

Yes, “Babadook” was a good one–perhaps the best horror movie that I’ve seen in recent memory (although “Buried” is up there, thanks to my immense fear of getting trapped in a small space). I also enjoyed the small-scale feel of it. Big Hollywood productions make me feel like I’m being ripped apart, they’re so grand. And usually they don’t have half the depth or focus of this movie.

Totally agree! Many studios are worried about massive explosions when they should be focused on the script

Someone once told me it looked stupid…now I’m going to watch it!

It’s definitely vastly different from other horror movies I’ve seen recently. It’s a slow burn, so stick with it!

Horror films do seem to be making a comeback, thanks to films like “The Babadook”. Some are awful, of course, but many are memorable (or at least notable). Recent flicks such as “It Follows”, “The Conjuring 2”, “Lights Out”, and “Don’t Breathe” come to mind. Fun if nothing else!

Totally agree with everything you wrote in this review. It was one of the more unsettling horror movies I have seen in years, and it really gave me some chills that ran down my spine. Nice to see a good and proper review for this small, but gem of a movie ?

It really deserves more praise than it gets! In my opinion, if you’re a horror fan it should be an obligation to see this movie!

I’ve never heard of this one, and frankly, it might be a while before I watch! However, if and when I do, I will appreciate even more your thoughtful insights.

It’s certainly not for the faint of heart, but you’ll definitely get a lot out of it!

I agree with most of what you said about the Babadook and am glad it got the recognition it deserved. I’ve also heard that the Babadook is a metaphor for the mother’s depression, which is similar to your analysis of a past loss coming back to haunt you. I thought the film was terrifying, but the goofy ending undercut the fear facter.

The metaphor is good, but the ending makes the movie less scary. After all, maybe you can’t get rid of past fears, but the Babadook seems a lot less powerful since they’ve tamed him

True, but I think that it plays into the whole metaphor as well since you can get over your fears but they never truly go away. I tend to look at this movie now as a deep movie with that has more to say than just having creepy set pieces. I could definitely see where you’re coming from though!

This film honestly made me both metaphorically and physically piss my pants! It’s certainly one of the best horrors in the last 5 years! Did you manage to catch either the Witch of Don’t Breathe from last year?

I LOVED Don’t Breathe! It felt so claustrophobic throughout it’s entirety. The Witch is at the top of my list of movies to see!

Ah man, if you like the feeling that at any point a film will make you cry, then you will love the dark, brooding nature of the witch! It won’t make you jump out your skin but brother, it will give you nightmares! You will have to let us know when you watch it!