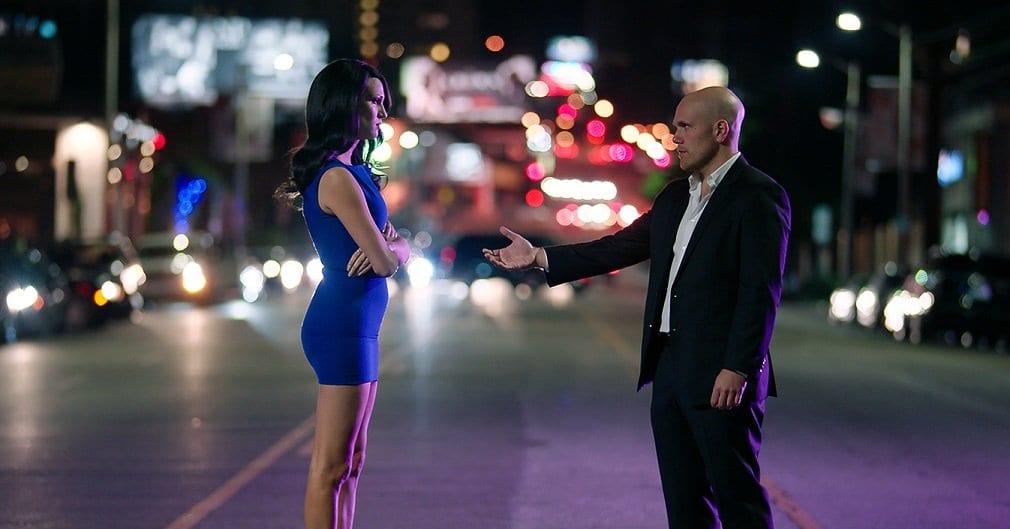 You have a pretty fascinating backstory.  Tell my lovely readers how you made your way to the U.S.

After graduating high school, I attended ESRA Paris (a French film school) for 3 years with a Major in TV Production.  Then I enrolled in a 1 year optional program in New York created by ESRA in partnership with Stonestreet Studios.  This program is entitled “Film Direction & Directing The Actors”, and it focuses on screenwriting, directing and producing fiction.  Following that optional year, I was allowed to remain and work in the US for one more year through an OPT (Optional Practical Training) which is how I am here right now.
This is during this past year that I’ve started working in the American Film Industry.

You’re currently working on two projects, “Haymaker” and “The Ranger,” what about these projects speaks to you?

Haymaker is about a Muay Thai fighter (Nick Sasso) and a transgender pop star (Nomi Ruiz); As a gay man, it was great to work with and support the LGBTQ community and give them a voice. I also worked on another feature film untitled “Lust Life” that speaks of that subject too.
As for the Muay Thai part of Haymaker, I did not know anything about it before and I really discovered the culture of it when we shot in Thailand, I’m definitely into it now!  That’s the beauty about our job, we get to travel the world, meet people and learn from new experiences.
The Ranger is a new take on the slasher films genre, it’s everything that made us thrill growing up.

For Haymaker, you shot all over the world in places like Greece and Thailand as well as in the states, what challenges did that cause?

Well as it’s a movie that’s been shot overtime in different segments, there are always new crew members, that’s a lot of paperwork for me (Laugh).
And as we are traveling, it’s always a new city or Country with different rules to film, new laws.
My biggest challenge was Thailand, I ended up Line Producer this segment, which means I was given a budget and I was in charge of the unit, we had a crew that was part American, part ThaÏ.  But filming in another country is amazing, you meet and work with locals and learn how they do films.

You’re working with some pretty well-established actors such as Chloe Levine and Jeremy Holm from Mr. Robot and some pretty well-entrenched figures behind the camera.  How has that experience been as you continue to grow your brand?

Being around experienced filmmakers has been extremely enriching. From the actors to everyone behind the camera, it’s all the same, we all work together to create a piece of art, everyone has an expertise and brings it to the table.  I was lucky enough to be able to learn from everyone around and at the same time contribute with my own perspective and experience.

What lessons have you learned from the production of each film?  Have you found any overarching ideas from each?

Working with different people everyday and considering my position, communication was the big one.  As a Production Coordinator/Manager, one of my main task is logistics, I need to know everything and everyone in order to answer as many questions as possible.  With all the information going through me, I had to learn how to be organized and how to communicate with every department.

Considering your roots and different background from many other players in the film industry, how has that influenced your films and how could that separate you from the pack?

Being a young and foreign filmmaker, I’m eager to prove to myself and to others that I can succeed in this industry.  I got my film education in France where films are done differently, and then I learned the American way.  As there is not one right way to make movies, I think having that double education allows me to have more options when confronted with a decision and also being open to new suggestions and not following “the book”, because even in the Production Department, you need to be creative all the time.

What inspirations do you have?  Are there any films or figures in the industry that speak to you?

Everything and Everyone inspires me in some way, I’m very curious about every subject even though they don’t really pick my interest at first. When you want to tell stories about the world and about people, it helps a lot knowing a little bit about a lot.
As for figures that speak to me it’s quite hard to pick something in particular, I might just have a different answer tomorrow, but for now I would say Spielberg, Tarantino and Tony Scott, these are people who found their identity through their work, and that’s what I aspire to as a Producer.

Who has been the most supportive person for you during these processes?  How have they helped you?

Producer Andrew van den Houten definitely, he’s the person who allowed me to advance this far in that short amount of time.  When he hired me on Haymaker – my first feature film – he took me under his wing and mentored me.  I was originally only supposed to work on the New York Unit as a Production Coordinator, ended up in LA and eventually Line Produced the Unit we went shooting in Thailand.
He gave me opportunities to grow everyday, he threw challenges at me and I kept learning and evolving.

Once your projects are finished, where will my readers be able to find them and watch them?

You will be able to see them first at film festivals, then in theater and in digital release.  If you want to make sure not to miss them, you can follow Glass Eye Pix and Hood River Entertainment.

What’s the next step for you and Hood River Entertainment?  Do you have any fun plans that you want to discuss?

We’ve been developing exciting projects throughout the year at Hood River Entertainment, I hope to be part of many in the future.  I’ve also been developing my own projects on the side and I hope I will be able to bring them to life and establish myself as a Producer.

As it currently stands, Hood River Entertainment is a fairly new organization.  However, with people like Sarr hard at work, it won’t be long before the production company stands alongside other titans in the industry.

Thanks for reading!  What are your thoughts on Hood River Entertainment’s Issa-Jean Sarr?  Comment down below!

Freddy vs. Freddy: How the ‘A Nightmare on...