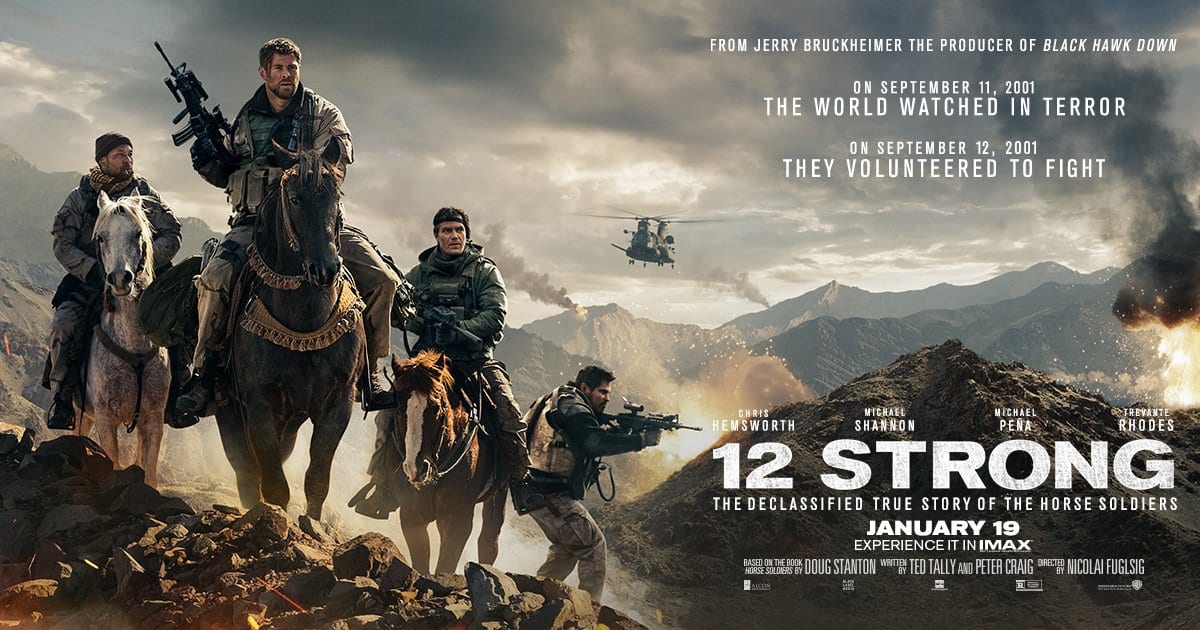 Hollywood has made a living off of displaying the heroic acts of some of our finest soldiers, showing how war takes a physical and mental toll on an individual.  12 Strong, the declassified story of the horse soldiers, looks to further that narrative by showing one of the most impressive military victories of recent memory — displaying that the best spoil of war is the ability to go home.  The following review will be spoiler free. 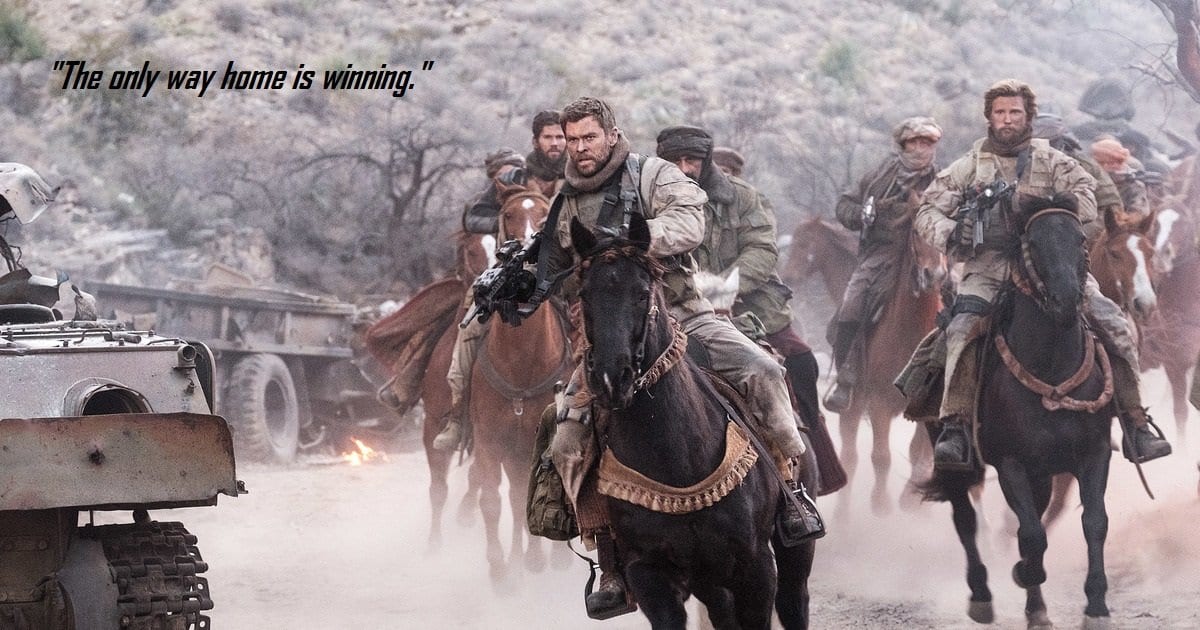 Following the tragic events of 9/11, America’s armed forces need to make a quick retaliation attempt to mitigate any further damage in both the United States and abroad.  A team of twelve men forms — led by Mitch Nelson (Hemsworth).  They are tasked with disbanding Taliban forces in the Middle East — a job that everyone is eager to accomplish.  Once the mission begins, it’s clear that the best way to travel is on horseback.  As they ride through the mountains, they run into countless bands of hostiles — calling into question Mitch’s declaration that everyone is coming home when the mission is complete.

Based on the book Horse Soldiers, superstar producer Jerry Bruckheimer began working on the script written by Ted Tally quickly after the story of Task Force Dagger was declassified by the government back in 2011.  To this day, the victory by the horse soldiers is considered as one of the most stunning victories in the War on Terror — and one of the greatest defeats from the Taliban’s perspective.  The soldiers were part of the Special Operations Command (SOCOM) units, protecting the lives of civilians while keeping their identities known only to a few individuals.  As such, the horse soldiers never received their standing ovation after their heroics — they simply returned home quietly.  Nicknamed “The Quiet Professionals,” these men showed the often selfless nature of serving in the armed forces.

It’s clear that the people behind 12 Strong were attempting to respect the courageous acts of the twelve horse soldiers at every turn.  As a matter of fact, the film hired Rob Riggle as the role of Lieutenant Colonel Bowers solely due to the fact that Riggle served under Bowers during his time as a Marine Captain.

Showing respect in the depiction of any war story is vital, and it appears that 12 Strong did everything it could in that regard. 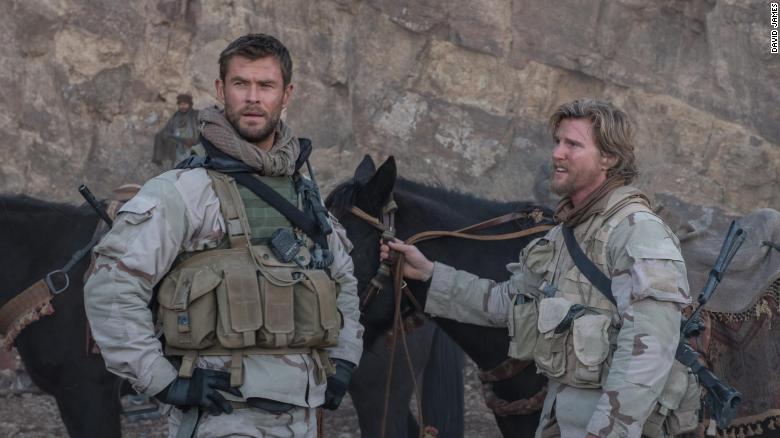 When a strong majority of the movie-viewing world sees you as the God of Thunder, it’s sometimes difficult to branch out into other roles.  Chris Hemsworth has had this issue in the past, but he works perfectly as Mitch Nelson, the captain of the mission.  The role certainly plays into his inherent masculinity, but Hemsworth becomes a solid character to get behind.  As his fellow soldiers exclaim, you could follow him anywhere.

Hemsworth’s character is a twist from the usual soldier in that he’s never been in combat before.  However, his men trust him because of his strong leadership and solid understanding of strategy.  Although some of the locals have their doubts, Hemsworth creates a united front — the only possible way to successfully tackle the mission.  These traits allow for a strong connection to Hemsworth as he takes on enemy fire. The rest of the cast should have been just as compelling.  After all, Michael Shannon, Michael Pena, and Trevante Rhodes are solid in just about every movie in which they star.  But, the script fails to do their characters justice, leading to lowered stakes overall.  These soldiers spout the typical war movie dialogue — making fun of each other with macho, dirty humor.  These one-liners and other moments are 12 Strong‘s attempt to get you to care for these characters.  However, when you get by the actor playing the role, there isn’t anything of note to these individuals that should make you care for their lives as they go into battle.

We come to learn that Michael Pena’s character was a history teacher and that other soldiers have families.  Besides these facts, we don’t learn much about these people.  It’s a generic setup that knows it’s generic.  To cover up for the lack of characterization, the film hired likable actors that audiences will recognize.  Hiring known actors is never a bad thing.  But, it becomes an issue when the movie uses their personalities as a crutch.  Each actor does a fine job with what they’re given, but you leave the theater without a sense of what makes them tick.  You’ll even have trouble remembering their names. 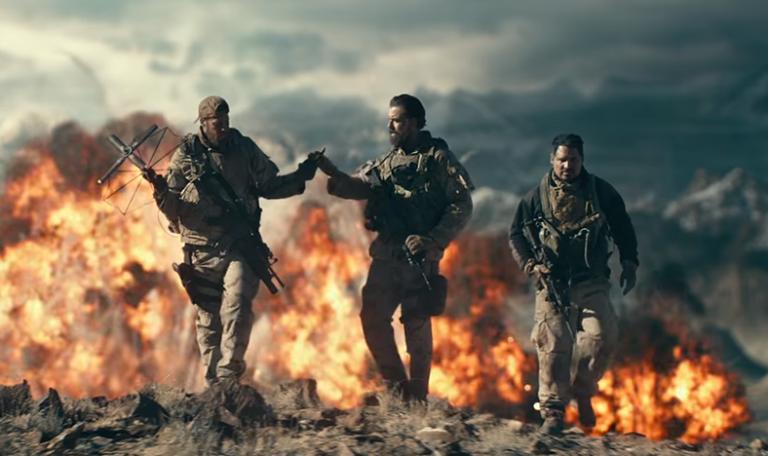 Creating solid characters is vital for any war film.  The shootouts are more frightening and deaths have added weight.  As for 12 Strong, that feeling never comes into play.  In the end, the explosions and gun fights become tiring without that connection.

12 Strong is Competent, But Not Impactful

War really sucks, and the best war movies can provide a serious visceral impact to drive that point home.  12 Strong’s action is fine — and that’s precisely the problem.

There’s some very solid use of practical effects as explosions blast through valleys and gunfire reigns down on both sides of the battle.  The issue is that 12 Strong doesn’t go the extra mile to show the audience how gruesome war gets.  Not only do the Taliban forces have the aim of Stormtroopers, 12 Strong uses CGI blood as spray when individuals get hit.  Let me make something clear: CGI blood never looks good.  It’s an eye-sore, and it also takes away from the gut-wrenching feel of war.  You begin to sense that everything is staged to an undeniable extent.

12 Strong is by no means a bad film.  There’s some signs from first-time director Nicolai Fuglsig that he could become a solid talent down the road.  But, 12 Strong stops short of a deeply affecting achievement in film — becoming an unfortunately generic endeavor despite a story that is anything but that distinction. There’s potential here for a truly remarkable war drama that is as uplifting as it is tense.  I just couldn’t get past the nagging sensation of fakeness in 12 Strong as it became a 99-cent version of something far more special.

12 Strong has very honorable intentions that do service to the harrowing actions of the brave men that fought for our country over a decade ago, but it doesn’t offer much in terms of a film.  Lacking the character depth to make the audience truly care and the visceral impact that makes war so terrible, 12 Strong firmly supplants its place as an adequate film that won’t ever come close to winning awards or, at the very least, receive overwhelmingly positive praise from critics and moviegoers.

There’s a clear feeling of respect for the actions of these men, but you leave the theater longing for something more.

Thanks for reading!  What are your thoughts on 12 Strong?  Comment down below!

I loved this film. It’s not without flaws ofcourse but still…its worth a watch👍😎

I’m glad you had fun with it!

Indeed i did. You might as well check out my review of the movie👍

Maybe I’ll have to 😁

Top post mate ;)
Also you can visit my new page and waqtch most popular movies free, here is a link:
https://movieonline666.wordpress.com/

The movie…? Oh, yeah, sorry I was ogling the macho guys…drool…

Though I haven’t seen the movie, I think the previews made it look like just another war movie and your review confirmed as much to me. Still going to go see it probably lol thanks for the awesome critique!

Glad to help! Those previews are pretty accurate IMO. Hopefully you find more enjoyment in it than I did!