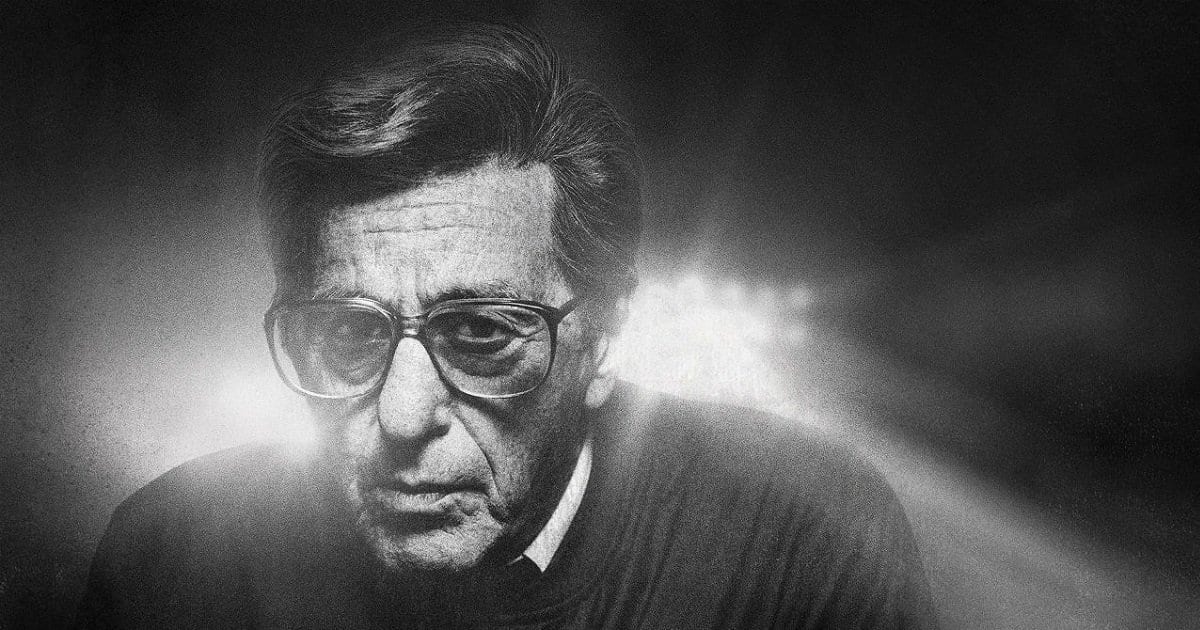 Penn State had to fundamentally change after reports surfaced of widespread child abuse and sexual assault at the hands of former assistant football coach Jerry Sandusky back in 2011.  That meant cleaning house at the administrative level, leading to the dismissal of legendary Penn State football coach Joe Paterno.  Paterno’s last week as the head football coach of Penn State was a chaotic, whirlwind experience, and it was only a matter of time before someone took on discussing the event in film format.

In his 61 years at Penn State, Joe Paterno (Pacino) took a school that was once called a “cow college” and quintupled its endowment, helping to provide generations of students with an education and eventually became the winningest head football coach in the history of Division-I athletics after beating Illinois on a fall afternoon.

However, shortly after his legendary win, news broke that his former assistant coach Jerry Sandusky assaulted and raped countless children on school grounds for years — and the school did nothing to prevent it.  An outcry from the media and the rest of the country ensued with everyone sharing the same question: why wasn’t something done to stop these acts sooner?  As a result, the media forces every Penn State official under the microscope, putting the legacy of Joe Paterno into question.

Even before the court sentenced Jerry Sandusky to 30-60 years in prison on October of 9th, 2012, a Paterno-based film was already underway with Al Pacino involved.  Legendary filmmaker Brian De Palma was later attached to the project, and HBO pounced on the distribution rights to the film as a result.  However, budgetary issues forced pre-production to halt, and the film went back into limbo.  Now, here we are almost seven years after the event itself took place, and Paterno is finally reaching the masses.

One question always rises when making films or series about a hard-hitting, dramatic event: is this too soon?  Penn State will never be the same after the Sandusky scandal, and its aftermath hovered over the football program for years.  If you ask me, it might have been a blessing in disguise that Paterno was delayed a few years.  It gave everyone a chance to further process the events.  Who knows, maybe the extra few years led to less of a reactionary, accusatory feature film in the end.  It’s always tricky when art and the darker side of history align — you can never be sure of when the intended audience will be ready for it.

Al Pacino Gets Back into Form as Joe Pa

It’s no secret that Al Pacino has struggled to find solid projects for himself in recent years.  When one of your most promiment films in the 2010’s is Jack and Jill, you definitely have a problem on your hands.  His role in Scent of a Woman, while earning him the Academy Award for Best Actor, permanently linked the man with the phrase, “HOO AHH,” and it’s become a punchline ever since.

At this point, when you look at Pacino, you see the weight of a topsy-turvy career in his face in all of his roles which actually mirrors the look of Joe Paterno late in his career as he encountered the Sandusky scandal.  From a meta standpoint, the casting of Pacino alone adds more weight to Paterno as he can be seen as a man that’s recounting his career (both in the film itself as Paterno and as an act of remembrance for his career outside of the film), wondering if he made the right decisions in his life.

But even with that feeling, Pacino is breathtaking as Joe Paterno, channeling his former self for some great, subtle work as an aging figure.  Pacino walks the line of gaining empathy from the audience while also showing his own mistakes.  It’s a very delicate, transformative journey that Pacino’s Paterno takes from focusing on playing Nebraska to re-evaluating his life decisions.  It’s quite haunting, especially with Pacino’s physical acting as he shuffles around as a man in his mid-80’s with a hip replacement.

As hysteria on Penn State’s campus grew to an all-time high during the week following the news report, everyone’s attention turned to the ramifications that would fall upon the football program.  However one question remained apparent: what about the victims?  It’s a very valid question to have considering the importance of finding justice against such heinous crimes.  Paterno goes out of its way — almost to a fault — to raise this question at every turn.

The witch hunt for Penn State officials intensified as media pressure increased for an overhaul to a system that obviously failed to keep a monster in check.  Paterno works predominantly from the perspective of those Penn State officials that fell to persecution, contemplating where they went wrong for so many years.  Still, the film constantly reminds the viewer of the abused children while drawing attention to how flawed it was to focus on Paterno and other Penn State administrators.  Children were in harm’s way, and movie wants us all to realize that they should have been the focus — not Joe Paterno.  And still, the movie provides a fascinating look into the guilt that these officials must feel for their years of apathy. Though there’s ample respect paid to the victims that proves that Paterno has the right intentions at heart, but you can’t help but feel a sense of manipulation throughout the film.  Characters take emotional moments to the extreme, hitting you over the head with their messages to make it absolutely clear that you understand that this a serious issue that Happy Valley must handle.  Jerry Sandusky abused many, many children over many, many years, and that fact alone should do all the talking for the film.

And yet, whether it’s through on-the-nose dialogue or awkward moments of emotion that are thrust into a scene, you are very clear of what the film wants you to feel, but it’s often less-than-subtle hand diminishes these moments.  It’s another example of a film failing to meet the standards of the classic adage “show, don’t tell.”  More often than what’s acceptable, Paterno fails to “show” much worth diving into.

Barry Levinson’s Paterno sometimes lacks the subtlety that you might want from a hard-hitting drama of this magnitude, but there’s no doubting that it has some serious weight.  Paterno captures the hysteria of the week following the press release of Sandusky’s actions from all angles, showing how the administration, the students, the press, and even Paterno himself were affected by the news but also making sure to note where the true focus of the story should lie.

Al Pacino channels his former self as Joe Paterno, bringing Godfather-esque subtlety to the role.  It’s obvious that he still has “it,” and it’s one of the more gratifying performances of recent memory. Thanks for reading! What are your thoughts on Paterno? Comment down below!