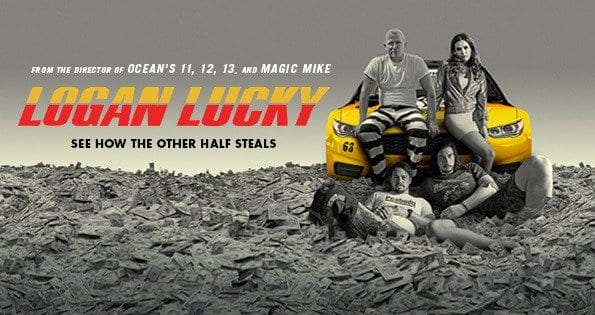 After a four year, self-imposed retirement from making movies, Steven Soderbergh is back once again.  It appears that he’s going back to his bread and butter as a director with another heist film.  This time around, we follow a group of West Virginians trying to steal from Charlotte Motor Speedway.  Logan Lucky has a fun cast, but is there anything more to offer than what Soderbergh has already given us in years past?  The following review will be spoiler free.

Logan Lucky is directed the previously mentioned Steven Soderbergh and contains a rather star-studded cast that includes Channing Tatum, Adam Driver, Daniel Craig, Seth McFarlane, Riley Keough, and Katie Holmes (among others if you can even believe it).

We follow Jimmy Logan, a man who was just fired from his construction job due to insurance reasons.  Now with no job, Logan needs money to help support his child.  After talking it over with his one-armed brother (Driver), they hatch a master plan to steal loads of cash from the Charlotte Motor Speedway during a race as Jimmy previously worked underneath the stadium and has some insider information.  However, they need some help to carry out the mission, which is where Joe Bang (Craig), an incarcerated explosives expert, comes into the picture.  With a solid plan in place, the Logans and company may have what it takes to actually pull off the heist of the century.

While Logan Lucky marks Soderbergh’s return to film, it’s his new distribution company, Fingerprint Releasing, that may be more interesting.

Soderbergh created the company in order to have more control over how his films are marketed.  While he wanted to have a say in creation of the trailer and TV spots, he mainly wanted to form the company to control marketing costs.  Soderbergh cites that it’s just to expensive to to release a film in theaters these days, so he enacted a carefully crafted marketing ploy that only cost $20 million, only a fraction of what it would have cost at other studios.

As a result, Logan Lucky was screened in about 3,000 theaters its opening weekend, compared to the typical 4,000 for a standard wide release.  Whether or not this plan worked is still in the air as there is still money in the budget to spend, but it appears that it’s not off to a good start as the film made a mere $8 million in its opening weekend.

Soderbergh is Back in Full Force

Business aside, it’s clear from watching the film that Steven Soderbergh hasn’t lost his touch as a filmmaker.  Logan Lucky breezes by with limited effort, allowing for wacky, Southern hijinks to ensue.  The movie is perfectly shot, highlighting intracacies that are necessary for a calculated heist film.  You certainly feel the hardcore West Virginia vibe that Soderbergh is going for in this film.  People walk around in camouflage, fake nails, and tattoos.  Logan Lucky is an ol’ fashion slice of Americana, and Soderbergh never lets you forget that fact.

The director of the Ocean’s franchise understands how to blend elements of the film together to create an engrossing heist.  In order for a film such as Logan Lucky to succeed, it needs to be swift and tasteful, showcasing the allure of a large-scale theft while also giving the film room to allow the audience to get attached to the characters so that there are stakes in the film’s main conflict. Soderbergh’s a crafty veteran when it comes to heist films, so he knows exactly how to create the feeling described above.  Logan Lucky flies through certain sequences, allowing for the snappy intrigue that comes with heist films to take root.  But that doesn’t mean that the film zips by.  There are plenty of moments where Logan Lucky screetches to a halt, enabling Southern banter to take place.

Daniel Craig is Having Fun in Movies Again

The man arguably at the center of the yuks is 007 himself.  Craig has seemed pretty sad and downtrodden in most of his films, especially with the latest Bond film, Spectre.  Thankfully, Soderbergh allows Craig off the leash.

His character is just downright silly.  Even his character’s name, Joe Bang, forebodes of a man who has a screw loose.

Joe Bang can be best described as a crazy, Southern alpha male that dabbles in explosives and the science behind them.  He loves eating eggs at every meal and knows that gummy bears are an important part of any homemade explosive.  He’s just an odd dude that ends up being the most memorable character in the film.  Joe Bang is someone out of a Coen Brothers film.  It’s hilarious just to see Craig act radically different from Bond, making his performance worth the price of admission alone.

There are clear parallels to the Ocean’s franchise in Logan Lucky.  If you’re going to make a heist film, the Ocean’s films are good movies to base yours off.  With Steven Soderbergh the director of both projects, these similarities are only compounded.

Logan Lucky can’t help but feel like a knock-off of better heist films.  It certainly has a fun, backwoods feel, but this is only a different skin to what is basically the same film as Ocean’s Eleven.  A rag-tag group of characters come together for an overly complicated heist of a large facility.  It’s difficult to get through this film without seeing it as a tad derivative.  It takes a pretty standard plot and accomplishes it without quite as much grace as the best in the genre.

Logan Lucky takes a bunch spread out yet intertwined actions that slowly coalesce over time into a cohesive resolution.  The problem is that it isn’t quite as fluid as other films.

Considering that Soderbergh is involved in the film, its difficult to see this film as a singular entity when his most commercially successful films did the exact same thing.

Logan Lucky is undoubtedly a fun time at the theaters, but it’s also fairly uninventive.

With Logan Lucky, Steven Soderbergh has proven that he hasn’t lost his touch as a crafter of great looking, expertly shot cinema.  However, his latest film retreads what some of his other films have done better, making it impossible to ignore some of the film’s inefficiencies.  It gets a B.  The film is still worthy of your hard earned money, however.

If you’re looking for a pleasant romp that won’t ruffle too many feathers, than Logan Lucky is your film.  It’s funny, quirky, and contains all the Southern goodness you might expect.  If nothing else, the film is worth seeing just to watch Daniel Craig act kooky.

Thanks for reading!  What are your thoughts on Logan Lucky?  Comment down below!

Good review. I watched it last night. I saw the first Oceans 11 movie and didn’t watch another as it was too “slick”. I like the down-home goodness of the characters in this film. Everybody knows everybody in the area. I really like the relationship the Logan brother (played by Channing Tatum) and his daughter and his siblings. This movie is way more than just a heist film!

I just think it’s the funniest thing ever to see renowned actors pull of thick Southern accents. It honestly makes watching Logan Lucky again worth it on its own!!

Daniel Craig rocked it. Not sure if you were able to see the deleted scenes when you saw it, but they are worth seeing. Dwight Yoakum as the prison warden was priceless! Shades of Tommy Lee Jones in Natural Born Killers!

I didn’t get to see the deleted scenes!! I’ll have to find them somewhere

A great review ! I particularly enjoyed reading about the background of the movie and director. It’s interesting to read a review by someone who is familiar with the directors material and thus able to make comparisons with his previous work. Your opinion seems well informed and has lead me to viewing the film under a different light!

Thanks so much!! That really means a lot!

i am wondering how you find the time to go to all these movies. i wish i had your time and commitment. this looks like a worthwhile movie to watch to get someone’s mind away from reality for a bit. i really like your focus on this blog.

I’d say I’m a pretty busy man! lol it’s all about time management and focus. Thanks for the kind words!

I hear you about that. You seem to have it down to a science. I’m definitely working on managing all my goals and interests. Busy is a good thing.

It’s definitely better than the alternative!

For sure because trust me I know that nothing to do is my killer.

Lol I think many people would agree with that!