Arguably one of the best Pixar films, 2004’s The Incredibles left an indelible mark on movie lovers, acting as a great version of the Fantastic Four that we’ve yet to actually get onscreen.  While it probably took way too long for a sequel to find its way to theaters, Incredibles 2 is finally here, and it comes very close to earning its name.

Picking up right where they left off, The Incredibles still must fight against legislation that calls for superheroes to refrain from performing superhero acts.  In an attempt to change the public perception of superheroes and remove their ban, Mr. Incredible (Nelson) and Mrs. Incredible (Hunter) team with DEVTECH, a telecommunications company that creates a device for everyone to see what great deeds these heroes do.

But everything comes undone once the Screenslaver gets involved.

It seems that The Incredibles is strongly tied to Brad Bird as its creative source — and that’s probably why it took so long for Incredibles 2 to come around.  Back in 2007, Bird said he was open to the idea of a sequel, but only if it could be better than the original.  Later, in 2013, he shared similar ideas when he said the following:

“I am stroking my chin and scratching my head.  I have many, many elements that I think would work really well in another Incredibles film, and if I can get ’em to click all together, I would probably wanna do that.”

Since 2004, it was all about putting the right story together, and it seemed like he finally figured it out when Disney CEO Bob Iger announced to shareholders a few years ago that another Incredibles film was coming.

It’s a given at this point to say something to the effect of “the latest Pixar film looks amazing.”  I’m always amazed with how much better the animation is in any Pixar film compared to other animation arms.  They look to add something new to every single film.

With Incredibles 2 Pixar has created action that is unbelievably clear while also interestingly inventive.  It has a pretty obvious rhythm to it (more on that later), but the familiar set pieces are filled with wildly fun and intricate tidbits.  Heroes fly across the screen, all of them using their own special abilities at the same time.  A favorite sequence of mine includes Elastigirl on a motorcycle as she stretches and contorts her body to be able to ride her detachable bike through normally undriveable areas.  Incredibles 2 understands how to utilize each heroes’ powers, combining many of them into single frames for incredibly kinetic and visually compelling movements.

To simplify, Incredibles 2 has no shortage of “Ooo!” and “Ahh!” moments — perfect for blockbuster filmmaking.

Incredibles 2 is an Ode to Parenthood

Brad Bird worked tirelessly to create a story that is more than just another superhero movie.  He succeeded the first time around in 2004 with a story that really worked as a discussion of family dynamics in a super-fictionalized world.  With Incredibles 2, he expands on those same ideas.  But he found a way for them to ring true in a wholly different manner.

Incredibles 2 flips the traditional family responsibilities on its head by having Mr. Incredible stay at home to take care of the children.  As he quickly learns, it’s even harder to handle than saving children from a burning building.  The film smartly goes back and forth between Mrs. Incredible saving people and Mr. Incredible struggling with day-to-day activities to show that the real heroes are good parents.

Not only does he have to look after Jack-Jack (who arguably steals the show), he has to maneuver through helping Dash with his school work while also consoling Violet as she handles members of the opposite sex.  No matter what he does, he seems to fail in some level, losing sleep (and parts of his sanity) along the way.  But Incredibles 2 understands the nature of parenthood, showing the little victories that come with some hard work…and a little help. 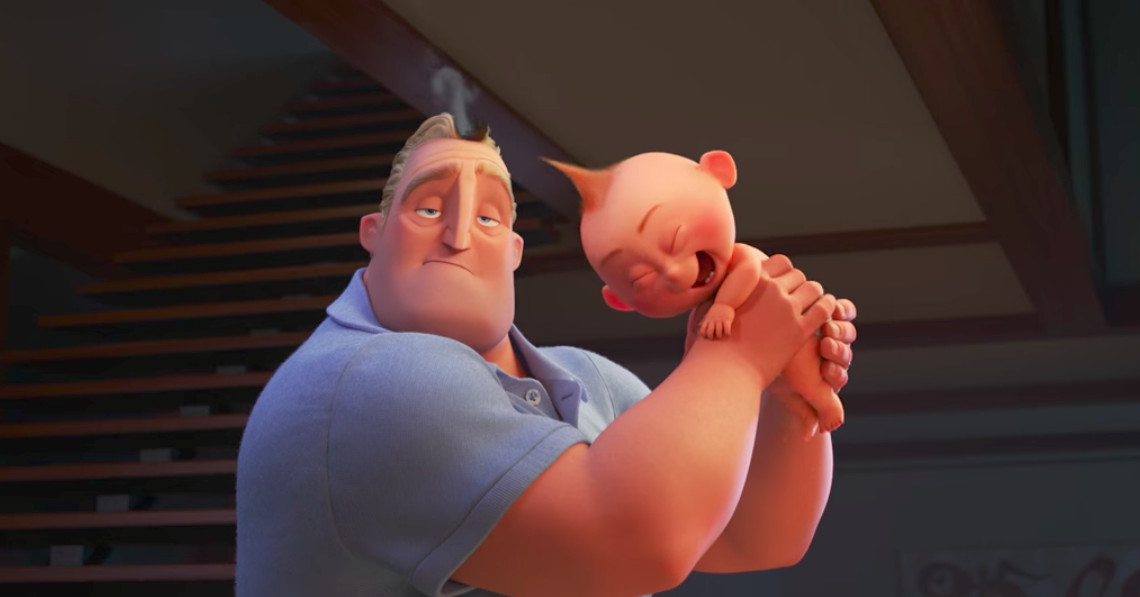 Incredibles 2 Wants to Have its Cake and Eat It Too

But the main discussion that Incredibles 2 has is about the superhero genre itself, with the Screenslaver claiming that we’ve all “gone soft” and expect superheroes to fix all our problems instead of doing it ourselves.  Or, as it pertains to our own lives outside of the movie world, we’ve grown too comfortable with the superhero genre and do not have high enough standards for that form of movie-making (and that we don’t seek out new, possibly challenging works of art that don’t fall in line with an established intellectual property).

As a critic that recommends countless new, exciting films only then see them pale in comparison to Avengers 25 at the box office, this commentary truly spoke to me.  But there’s a sense that Incredibles 2 is a little self-righteous.  After all, it follows the same standard beats as most superhero films with a clear three-act structure and repetitive set pieces that culminate in the same heroic climaxes.  Incredibles 2 is an undeniably entertaining flick with a lot of heart, but it’s not dissimilar enough from the movies it’s critiquing for its meta commentary to work fully. It’s a little too self-reflexive for its own good, but Incredibles 2 is a quality companion to the original that injects more heart into the superhero genre a time where it sorely needed some.  Jack-Jack will unquestionably become the fan-favorite from this film, but the family dynamics as a whole are still the most fascinating part of this superhero group as they metaphorical learn how to live in 2018’s version of society.

Incredibles 2 is a bunch of fun while still containing a narrative soul.  You can’t ask for much more from a summer blockbuster!

Thanks for reading!  What are your thoughts on Incredibles 2?  Comment down below!

I am so excited for the new Incredibles film, we’ve waited so long for the second part in the story x

Exactly! Everyone wanted to see where the best version of the Fantastic Four was headed!

I watched this with school as a celebration and I was surprised at just how good it was. I LOVED it.

Loved this review!! Can’t wait to see it this weekend! :-)

Thanks so much! I hope you have fun!

Completely agree! I was initially excited by the prospect of Incredibles 2 but as more trailers were released, I just lost interest. So perhaps my low expectations allowed me to actually be pleasantly surprised by the movie. As someone who loves superhero movies, even I have become thoroughly exhausted by the genre and its formulated story telling. It says a lot that Incredibles 2 managed to be just as original (if not more so) than many superhero movies being released with a more adult audience in mind.

Definitely agree! I’ve been somewhat desensitized to the genre recently and it takes a lot for me to be overwhelmingly positive on a superhero movie, but Incredibles 2 is just super charming you can’t help it!

I hope to see the film this weekend!

I hope you enjoy!

I’ve never really been a fan of the first one. My family want to watch this though

It’s a perfectly enjoyable film! Why didn’t you like the first one?

I don’t know… it just didn’t grab me like Disney/pixar usually do… maybe I was the wrong age when it came out…. I like zootopia much better but feel kinds the same about that, perhaps I’m just too ‘old skool’ for 21st century disney 😂

Lol that’s fair! It seems like a lot of the love comes from people that were the correct age when the first one came out. Many people of the same age range were cheering the craziest in my screening 😂

Hey, nice review! I actually wrote one of my own on the film, but I’ll definitely agree that the film is as you put it “a nice companion film” to the first, though not surpassing it. I think beyond the meta-commentary thing for me was simply that Syndrome was a stronger antagonist than Screenslaver (and I might have preferred a longer Underminer plot, but maybe that was just me.) There was this powerful personal grudge of over a decade and a half there, and the idea of the self-made villain who became rich off his own genius- and ultimately met his demise via the same hubris in such smarts, just worked on a deeper level than this film’s villain, who despite being adequate, never quite hit the same notes of tension and drama for me at least. The action sequences were super-impressive as I’d hoped, and the intact family dynamic was maintained, so for me it was a worthy sequel that will probably place itself among the middle of Pixar’s many outstanding films, while the original to me at least is arguably a top 3 pick for the studio.

You’re spot on there. There’s a history to Syndrome that connects so strongly with the film. Plus Screenslaver as a force is somewhat forgotten because they just HAD to have that reveal that everyone saw coming.

You are spot on about the meta commentary. It reminded me of Ready Player One trying to lecture us about appreciating the real world – fairly hypocritical.

You’re so right! At least the message wasn’t as hamfisted as in this one as it was with Ready Player One 😂😂

I agree with your review…except maybe it should be A- just for the female empowerment angle? Looking at the audience in my theater, I could tell that the parents enjoyed it a lot more than the kids did. :)

The grade is always super subjective. The difference between a B+/A- is always fairly negligible in my mind!