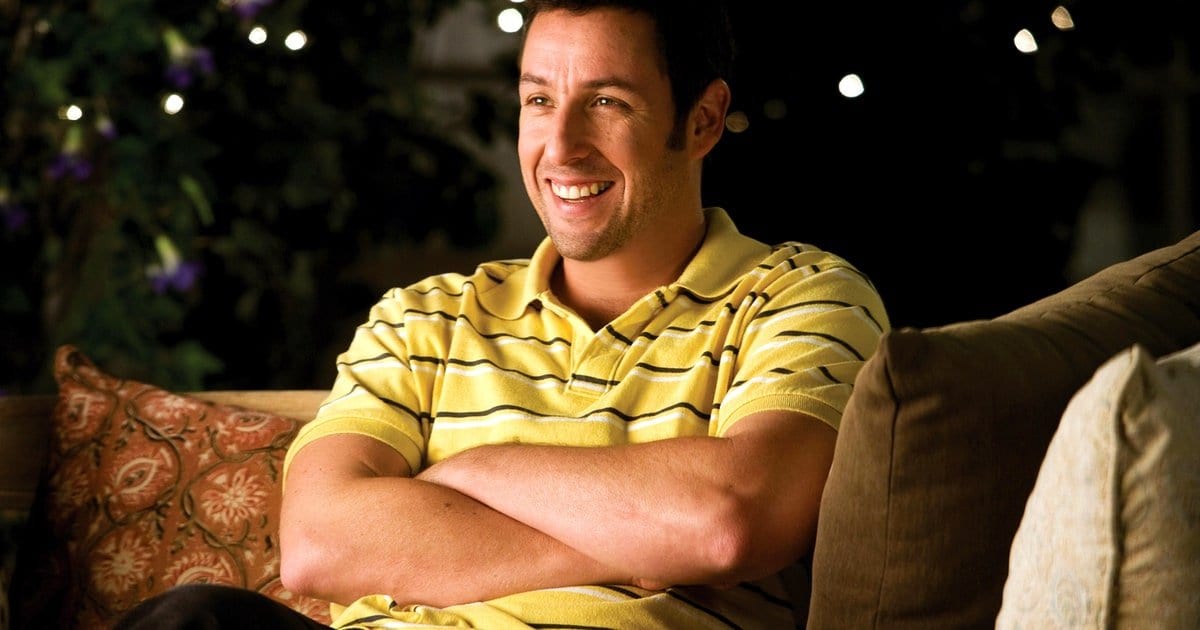 Hotel Transylvania 3:  Summer Vacation (2018) is out and promises to be the 3rd successful film in the franchise from Sony Pictures Animation.  Once again it offers a bountiful cast of comedic talent, including Adam Sandler, Andy Samberg, Kevin James, David Spade, Steve Buscemi, and Fran Drescher.

Do you think Adam Sandler’s acting is underrated?  Would you go to a Sandler movie if it wasn’t a comedy?  While everybody loves him as the voice of Count Dracula, can we really appreciate how much these productions benefit from having him behind the microphone?  Adam Sandler has acted in some well-received parts.  But because of his ‘baggage’ of being thought of as a non-acting funnyman, he hasn’t always gotten the credit due him.  Sometimes he’s been outright underrated.  I’ll count down the list of his most underrated performances for you to prove my point.

Seldom are comedy actors given credit for their acting ability.  Few have crossed over to mainstream acceptance as an actor who could hold their own in even a semi-dramatic role.  Robin Williams proved it in more films than Good Will Hunting (1997) and Dead Poets Society (1989).  Eddie Murphy showed his mettle in Dreamgirls (2006).  Kristen Wiig’s more than memorable turn in The Martian (2015) certainly sets her apart.  Remember Jim Carrey in The Truman Show (1998)?  Tina Fey plays it about as straight as can be in This is Where I Leave You (2014).  Steve Carell in Foxcatcher (2014), Mary Tyler Moore in Ordinary People (1980), and Bill Murray in St. Vincent (2014) round out the list.  Adam Sandler has made a serious effort to be taken seriously on screen.  Should he be on the list too?  Look at his most underrated acting performances and then decide.

The animated films will surely get slighted, so I say let’s recognize them here.

I just can’t imagine these movies without Sandler as Dracula.  Can you?

Reign Over Me (2007) is another one, and it just shows how good a performance Sandler can give, although it might not qualify as an underrated one.

Sandler plays Skeeter Bronson, a hotel handyman who spends time with his niece and nephew telling them imaginative stories.  When they begin to come true, things get out of hand.  This fairytale-like adventure is such a departure from Sandler’s adult-oriented comedy that his ability to make the transition to a family film deserves merit.

This is a unique choice because it is arguably one of his most memorable films.  It is one of his first romantic comedies where he co-stars with a female lead, aptly handled by Drew Barrymore, who in many ways steals the movie with her so-called rare memory condition that only works for 24 hours before she forgets everyone she met that day.  Some might say they wish they’d had amnesia after seeing Fifty First Dates, but not me.  I think the story works because of Sandler’s ability to ground it around his determined commitment to a woman who doesn’t even know who he is.  Without Sandler’s efforts, repeating the same joke over and over would wear thin long before the end credits roll.

A favorite film of Judd Apatow fans, this is perhaps Adam Sandler’s best movie, if not his best performance.  How challenging was it for him though, I wonder, to play a comedian turned movie star?  Gene Simmons, his character, does suffer from depression.  That is nothing to laugh about.  And it requires considerable dramatic acting ability to do it justice.  Because this was a movie with an actual story it represented another departure from the likes of Happy Gilmore (1996), The Waterboy (1998), Big Daddy (1999), and similar well-known Sandler comedy tropes.

Written and directed by James L. Brooks this very funny family film stars Sandler as John Classky, a father of two married to Deborah (Tea Leoni), while taking care of his mother-in-law Evelyn (Cloris Leachman).  This story of rocky dynamics that take place between a dysfunctional family, their immigrant nanny (Paz Vega) and her live-in daughter is as impactful as it is because of how Adam Sandler handles the central role.  He must portray someone who is successful outside the home yet takes second place to a domineering spouse after work.  That’s not easy to pull off for any actor.  He does a convincing turn.

This Paul Thomas Anderson film starred Adam Sandler as lonely business owner Barry Egan who falls for Lena Leonard (Emily Watson), a family acquaintance.  An all-around well made movie, this might be his best performance (he had a Golden Globe nomination) and yet still the most underrated.  Why?  It was a comedy and the genre doesn’t get any respect if you ask Rodney Dangerfield.  He didn’t get any recognition from any of the usual suspects.  Is it a double standard that acting must be in a serious role to get any award consideration?  Isn’t humor a part of real life? Didn’t Terms of Endearment (1983) make us both laugh and cry?  Watch Punch Drunk Love (2002) and decide for yourself how good his acting is.

For those of you who prefer that Adam Sandler stick to comedy roles, you’ll be happy that he is returning to comedy and re-teaming with Jennifer Aniston with whom he starred in Just Go With It (2011).  They are working on Murder Mystery, a Netflix distribution which is due to come out in 2019.

Thanks for reading! What are your thoughts on Adam Sandler’s underrated performances? Comment down below!

[…] But for each of the movies I would stan — Mr. Deeds, Grandma’s Boy, Click, Funny People, and a few other films among them — there’s two or three more I want to banish from […]

I love fifty first dates and Spanglish which I just watched recently(beacuse of adam). I haven’t watch most of the movies in the list but I guess Click should have been there.😊

My favorites in this order are Punch Drunk Love, Spanglish, Big Daddy, Click. But he does do a lot of terrible movies in my opinion. Jack and Jill, what a joke! But he can still be funny.

I thought “Click” was very good,what was a simple fantasy film sure flipped on an emotional dime and was pretty moving in the end.

Yes. I love ‘Punch Drunk Love’, have seen it three or four times and under your timely nudge will watch it again tonight. Thanks :) ‘Funny People’ was pretty good too.

adam sandler is really underrated. i love his films.

I really enjoyed “The Meyerowitz Stories”. Did you see that one? Adam Sandler was great.

I have not seen it. But I am planning to in the near future.

I have not seen it. But I am planning to in the the near future

Good! Please let me know what you think.

Converging Media: Is the Growing Trend of Adaptations...