‘The Wrong Missy’ Isn’t the Worst from Happy Madison, But that’s Not Saying Much 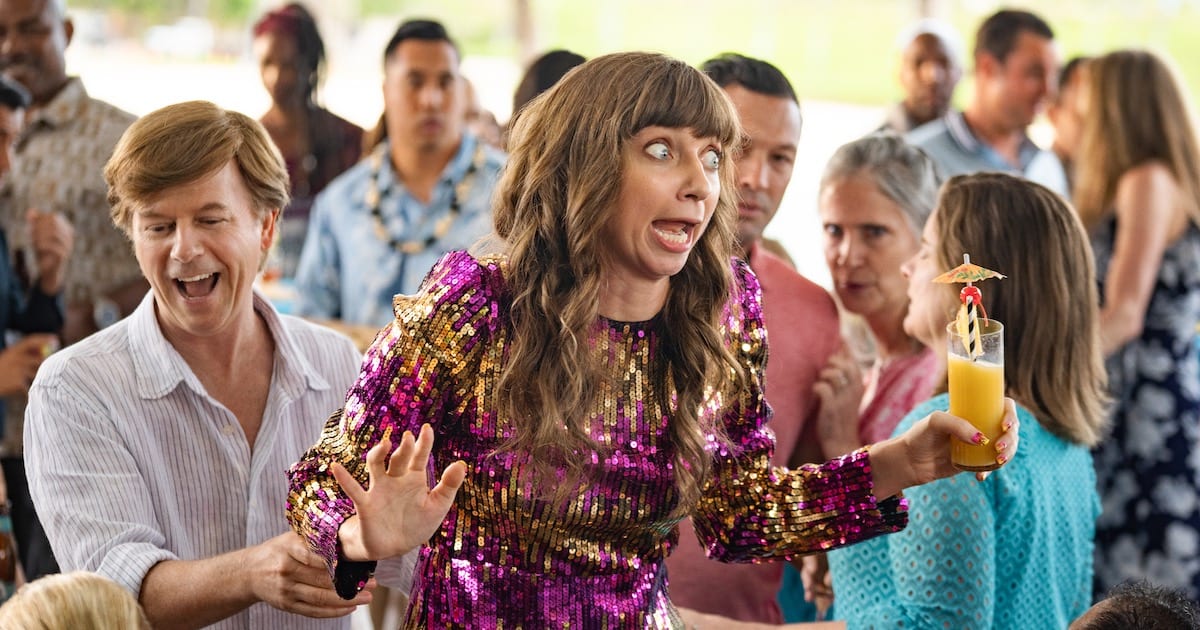 Odds are you’ve seen a bad Happy Madison movie. Adam Sandler’s production house has produced plenty of limp comedies only a 13-year-old boy can love. Granted, I was one of those 13-year-old boys at one point, so I can appreciate the need for such movies on some level. But for each of the movies I would stan — Mr. Deeds, Grandma’s Boy, Click, Funny People, and a few other films among them — there’s two or three more I want to banish from this Earth entirely. Forever. Wiped from existence. Not even Sandler’s gonzo, meme-filled brilliance in Uncut Gems makes up for them all. (But it’s close!) But to my surprise, The Wrong Missy doesn’t join the list of “I hate myself for watching this” Happy Madison movies.

On a sliding scale of Bucky Larson: Born to Be a Star to Funny People, with The Longest Yard (2005) marking the midway point, The Wrong Missy is somewhere in the lower half, though clearly superior to the dregs of Happy Madison. Definitely lazy, but not the laziest. It’s more forgettable than anything else, leaving me a shrug as I went about the rest of my day. Congratulations are in order, I guess?

Although not every movie follows the same outline, the Happy Madison formula has grown quite clear over the last few years. It involves any combination of the following:

The Wrong Missy checks off all the boxes as yet another raunchy romantic comedy for Happy Madison, starring David Spade (age 55) and Lauren Lapkus (age 34) as the two of them take a trip to Hawaii and, of course, hijinks ensue. The misunderstanding that puts the plot in motion puts sitcoms to shame; for a second, I could have sworn an announcer from a studio audience was about to come on and say, “you won’t believe what happens next!” And yes, there’s product placement, Rob Schneider, obnoxious humor, and Jackie Sandler to add to the mix.

After a horrible blind date with Missy (Lauren Lapkus) months before, Tim (David Spade) runs into who he believes to be his true love, Melissa (Molly Sims). Or, Missy Number 2. Sometime after, Tim invites Melissa to his corporate retreat in Hawaii…or so he thought. It turns out, he was texting Lauren Lapkus’ Missy the entire time, and now he’s stuck with a ferocious, loud-mouthed, in-your-face woman for the entire weekend. After previously bragging to all his co-workers about Melissa, Tim must rein in Missy and impress his boss. (Cue the slide whistle.) 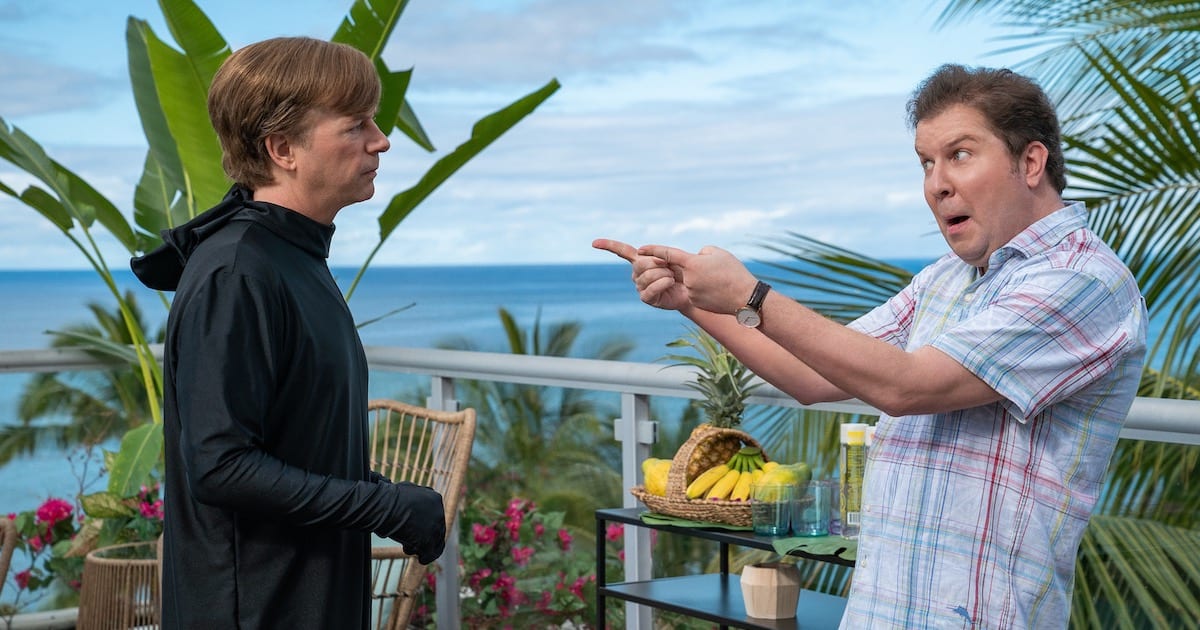 Not Quite Scrapping the Bottom of the Barrel

So what is it about The Wrong Missy that makes it bad, but definitely not the worst? It comes down to the fact that there’s clearly more effort put into it than, say, David Spade’s last Netflix film Father of the Year, or most of the Happy Madison movies on Netflix, which are riddled with people phoning it in the start. Even better, The Wrong Missy calls out the farcical age difference between Spade and Lapkus in the first 15 minutes. Look! Wittiness! And at 90 minutes in total, the movie is finished before you can even start to think about bloatedness.

It’s probably the lowest bar possible for a movie to clear, but people are actually trying in this movie. The difference is clear when you compare The Wrong Missy to Murder Mystery, which plays as if all actors were heavily sedated before arriving to set. The Wrong Missy has an energy to it; perhaps it’s not the best energy — it’s mostly obnoxious — but at least it’s something worth discussing. Especially when it comes from Lauren Lapkus.

This may be the weirdest comparison you see made when it comes to discussing The Wrong Missy, but Lauren Lapkus’ performance reminds me a lot of Tom Hardy‘s insane, otherworldly performance in Capone. Except with 100% less shit.

Both are entirely off the leash, doing their own thing and dragging the movie along with them. Are they entirely successful? No! But are they sights you can’t look away from? No question. Each performance has a freakshow-like quality to them: you feel a little dirty for watching Hardy and Lapkus go about their business, but it’s quite the experience!

Lapkus acts as if she was told to be at a 10, but bumped it up to a 47 instead. She screams, drinks nonstop, and is incredibly horny. Upon seeing Spade’s Tim on the plane to Hawaii, she immediately force feeds him a dog tranquilizer, and later wakes him up by giving him a good ol’ tug to the, well, you can probably guess where. Later, while bathing in the tub, she puts rose petals on her eyes and calls herself “Hellstar”, talking in a voice similar to Danny Torrence’s voice for Tony in The Shining. Calling her character obnoxious doesn’t do her justice. More appropriately, she’s an insane person torpedoing through every other character’s life.

Look, if we’re going to have a movie where we repeat the same trappings as just about every other movie where a reluctant guy pairs with a woman he initially finds revolting, then at least let the actors go nuts and bring as much personality to a personality-less blueprint as they can. The script is dead on arrival, so why not go crazy to compensate? If her role as a human cat in Holmes and Watson wasn’t enough evidence, Lauren Lapkus is clearly committed to the bit. And dammit, I respect her for it.

(Still, can someone find her a better movie role? You know, one that fits the dictionary definition of “good”?)

The Wrong Missy is Still a Bad Movie

But individual examples of effort can only go so far. The Wrong Missy is still quite bad, headlined by a few very uncomfortable and problematic sex scenes, one of which to the tune of an utterly baffling cover of “My Neck, My Back” by Khia. I may not want to banish this movie to the ninth circle of hell, but I’ll gladly do it to that song. Overall, the film can’t help but appear like a male fantasy, with beautiful women always lusting after David Spade for no apparent reason. There’s also one subplot including hypnosis, one of Missy’s many talents as we come to learn, that drags on for far too long after showing some initial promise.

I’ve seen worse from Spade playing the straight man in comedies, probably due to Lapkus’ good-bad energy rubbing off on him. Nevertheless, you know every single beat of his character just by reading the synopsis. And the film fills in the particulars with much of the same crass humor synonymous with Happy Madison. Despite Lapkus’ best (worst?) of intentions, The Wrong Missy is very forgettable. That’s saying a lot for a movie with a prolonged shadow dancing sequence to bank credit practices.

Thank you for reading! What are your thoughts on The Wrong Missy? Comment down below!

[…] Halloween has dropped on Netflix! And shockingly, it’s not as bad as many of the other recent Happy Madison productions. Brennan and I dive deep into the film, and even discuss the prospects of the Adam Sandler Extended […]

[…] at its logical conclusion. A perfectly fine structure if you ask me. Most terrible comedies (many coming from Happy Madison) start with jokes that could be funny in theory, but allow the scene/recurring bit to go on too […]

lolol I feel so bad for her. She’s clearly doing a lot on TV, but in terms of her movie roles, there’s absolutely NOTHING out there for her.