Laurel and Hardy’s ‘Babes in Toyland’ Is the Best Version 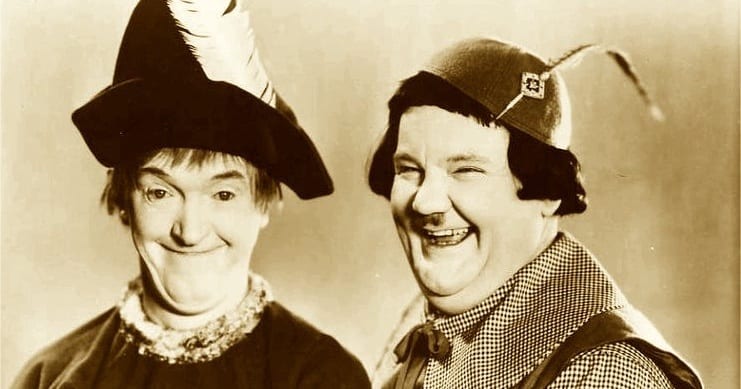 This past Thanksgiving weekend, I revisited a piece of my childhood almost untouched by time. A movie that, despite its age and subject, wears down the walls of cynicism, makes me forget the troubles of the world and always has me smiling. That movie is Babes in Toyland, aka March of the Wooden Soldiers, starring Stan Laurel and Oliver Hardy.

Babes in Toyland began as an operetta in 1903. You’ll never find a production of the original put on today. Why? It’s insane. There are convoluted schemes, love triangles, too many characters, and lots of random fantasy elements. Despite this, the show was tremendously popular. Because Babes in Toyland was a musical first, a film adaptation had to wait until the talkies came along. When it did come to the big screen, it took a turn that few expected.

Enter Hal Roach, famed producer of comedy vehicles for stars of the ’20s and ’30s. Roach saw the comic potential for Laurel and Hardy in Babes in Toyland. His initial treatment didn’t impress Stan Laurel, however. Few know that Laurel took his craft seriously. He often rewrote scripts to milk as many laughs from it as possible. While this might sound like the workings of a control freak, Laurel knew what he was doing. This Babes in Toyland is full of entertaining comic set pieces, lines, and characters, and has a tight plot that ties them all together. It is Laurel’s movie more than it is Roach’s.

But perhaps the greatest contribution Laurel might have made to March of the Wooden Soldiers is how naturally he and Hardy step into the role of the main character. The leads in the other Babes in Toyland films are love interests usually named Tom and Mary, and they are so mind-numbingly boring. They take time away from the characters who have real personalities and make those other Toyland films far less interesting and fun to watch. March of the Wooden Soldiers does something radical when it comes to its leads — it takes the funny side cast we want to see more of and makes them the focus while putting the traditional romantic protagonists in the background. Normally, handing the spotlight over to the comic relief characters is a bad idea. When the most iconic comedic duo of all time plays those side characters-turned-leads, however, we’re in good hands.

The biggest draw of the movie is our stars, Stan and Ollie. If this site awarded points to judge a movie’s worth, I’d give them a perfect score. They’re the ultimate duo, plain and simple. Stan’s naivete foils Ollie’s stuffiness, and it’s fun to see who’s really leading the other. I won’t spoil their hilarious conversations or physical routines because you must see them for yourself. While they’re more or less playing themselves, their acting is commendable. We care about Toyland’s survival or Tom-Tom and Bo Peep because they care so much. When Stan and Ollie mess things up, they really mess up (the runaway soldier, the failed burglary). But when they think up a good plan, work together, and succeed (the bride swap, fighting back the boogeymen), it feels earned. And in the end, the very thing that was deemed their greatest failure turns into their greatest triumph.

Even when the two snipe at each other, it comes from a place of love. As much as I enjoy Abbott and Costello, you can tell when Bud and Lou were in the middle of one of their spats. Laurel and Hardy never had that problem. Their mutual respect and abiding friendship endured both onscreen and off. When director Stanley Kramer offered Stan a dump truck full of money for a two-second cameo in It’s A Mad, Mad, Mad, Mad World, he turned it down. Why? Because by that time Ollie had passed away, and he didn’t want to do it without his dearest friend by his side. How can you not admire that?

On a similar note, the other characters are fun to watch. Bo Peep and Tom-Tom are the exceptions to the dull love interests; one’s a sweet but spirited woman who’d risk her life to save her friends, and the other’s a simple but equally determined man falsely accused of Barnaby’s crimes. Speaking of, Henry Brandon is the definitive Barnaby. He’s as gleefully hammy as those who came after him, but he’s also spiteful and cunning. Like Beauty and the Beast’s Gaston, the longer it takes to get his way, the more dangerous he becomes. Not even Laurel and Hardy can make him smile. Plus, he has an army of monsters at his command! While you root for Barnaby in the other adaptations, you love to hate this one.

The story is simple but still entertaining enough to hold your interest. Barnaby threatens to evict our heroes from their shoe home if Bo Peep doesn’t marry him. Stan and Ollie must overcome their own incompetence to save their family. There are no sudden or convoluted twists that keep the plot moving. The gags weave themselves into the story naturally. Some of them even play an important part in the third act. The tone is on point; it knows when to switch from Laurel and Hardy’s antics to Tom-Tom and Bo’s crooning and back. There’s never a lull where it focuses on one longer than it should. It climaxes in one of the most satisfying battles on film, the titular march of the life-size toys against Barnaby’s boogeymen.

Something interesting about March of the Wooden Soldiers is while it’s technically a musical, it turns all of its songs (with the exception of “Toyland” and the titular march) over to Bo Peep and Tom-Tom. I have no qualms with this as they are the best singers in the cast. The movie makes up for the change by cleverly incorporating some of the cut tunes into the score. “Hurry ‘Til We’re Done” underscores the toy factory scenes, and “I Can’t Do The Sum” is delightfully repurposed as Stan and Ollie’s leitmotif, especially during their more clueless moments.

I must confess to some cinematic blasphemy: though the film is in black and white, I prefer the colorized version. The reason: that’s the one I grew up with. Watching March of the Wooden Soldiers without any color is like watching Mary Poppins in sepia tone; it just doesn’t feel right. March was supposed to be shot in Technicolor, but there was no room left in the budget. The colorized version is the closest thing we have to how the film is supposed to be seen. It makes you feel like you’re watching illustrations in an old picture book come to life. Even the unusual appearances by Mickey Mouse (a monkey in a costume) and Disney’s Three Little Pigs are oddly quaint.

I’ve seen every variant of Babes in Toyland I could find. Each one has its own strengths and weaknesses. Yet, pushing my nostalgia aside, March of the Wooden Soldiers is still the best-made version of this tale. It helps that it’s the only one with a 100 PERCENT SCORE ON ROTTEN TOMATOES. I don’t often lean on movie aggregator sites to judge films, yet I can’t help but feel vindicated that one of my favorites is technically among the best ever made. By RT’s standards, this means this movie is right up there with:

March of the Wooden Soldiers was my gateway drug to Laurel and Hardy. I can’t think of a better way to introduce someone to their work. This is their best film, yet it’s never discussed, or at least with the same respect as something like The Flying Deuces. Is it because the nursery rhyme setting gears it more towards children? I don’t know, but I hope that will change someday. This movie still airs regularly on Thanksgiving and Christmas; despite owning it on DVD, I look forward to seeing it on television more than I do the Macy’s Parade.

Is March of the Wooden Soldiers cheesy and outdated? Who cares? It’s on the list of my favorite films for a reason. Eighty-five years later it’s hilarious, charming and, in a way I can’t quite describe, timeless. I went through the “I’m too mature for this stuff” phase with it. But when I finally returned as an adult, it was there for me as if nothing had changed. Through all the upheavals life has thrown at me since, it’s still there. Mother Goose’s song is wrong; once you leave Toyland’s borders, you can return again. Because whenever I’m at my lowest, I think to myself:

“You know what? The Wooden Soldiers.”

And I’m back there, happy again, time after time.

Thanks for reading! What are your thoughts on Babes in Toyland?  Comment down below!

I haven’t seen this film, but have seen the Disney version which I’m really not a fan of. I gotta check this one out too.

I love Abbott and Costello too and they are my favorite, but I can agree with what you mean about seeing when they had their falling out such as in The Time of Their Lives and Little Giant.

[…] Think of it as a condensed version of my full review of you haven’t read it yet. Click HERE to read […]