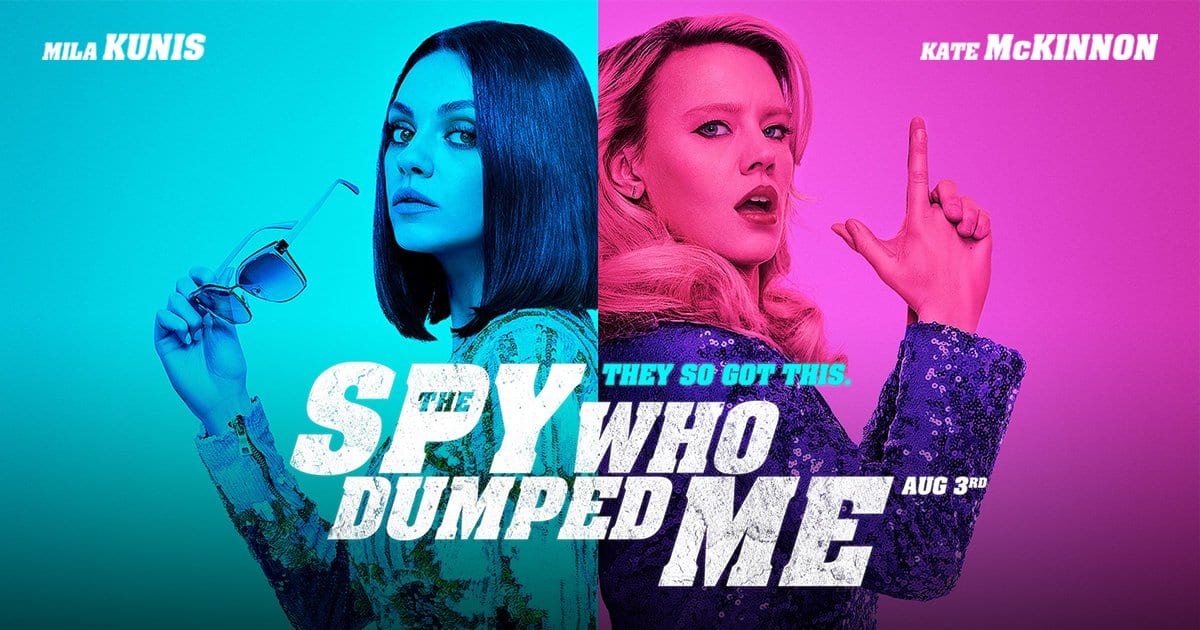 Lionsgate is beginning to create a pattern of films that it releases in August with The Spy Who Dumped Me. Their latest film in a long list of action movies to come out in August combines the lovely Mila Kunis with the ever-animated Kate McKinnon. The result? Well, it can be summed up in one word (or noise, whichever way you look at it): meh.

Audrey (Kunis) and her best friend Morgan (McKinnon) aren’t exactly pleased with their situation. Audrey was just dumped by her boyfriend Drew (Theroux) over text, leaving Morgan just as angry.

But inexplicably, Drew shows up at their apartment with trail of deadly assassins on his tail. In turns out he’s a spy, and now Audrey and Morgan are stuck in his web of international espionage. But lucky for the two of them, they quickly find out that they’re more than capable to operate in such a world.

As I alluded to earlier, Lionsgate is creating a trend in the way it distributes its films. Similar to the way that Disney/Pixar always releases an animated film on Thanksgiving, Lionsgate always positions an action movie with notable stars for an August release. Last year it was The Hitman’s Bodyguard with Ryan Reynolds and Samuel L. Jackson; in 2016 it was Mechanic: Resurrection starring Jason Statham, Jessica Alba, and Tommy Lee Jones; 2015 had American Ultra with Jesse Eisenberg and Kristen Stewart; The Expendables 3 owned August 2014 with its plethora of older action stars.

Obviously, these films vary considerably in tone. Still, all of these films follow similar patterns. All these stories involve some slant on espionage and contain likable stars that do their fair share of globetrotting as they save the day.

What’s the cause of this trend? It’s hard to say. Maybe Lionsgate sees the opportunity to earn a decent chunk of change off of star power as summer starts to wane in terms of massive, highly-anticipated blockbusters in the dog days of the season.

A Pleasant Touch of Feminism

Right from the start, it’s pretty obvious that The Spy Who Dumped Me wants to preach women empowerment.

The movie starts exactly where you think it does. Kunis and McKinnon’s characters are plucky, but they’re certainly down on their luck, looking for a way to improve to find purpose. Thrown into a wild spy caper, they’re naturally out of their elements, unclear of what is happening around them as their male counterparts dominate the action.

But as these two find their footing, we learn that they’re inexplicably good at what they do, using their odd assortments of skills to dodge trouble whenever it comes into frame. There’s some obvious luck involved as they narrowly escape treacherous situations, yet they start to learn how to survive, thriving by the time the third act comes around.

I appreciated how organically the female agency fits into the narrative, letting these characters grow within the story, even allowing for some great humor from Kate McKinnon on occasion.

Quite the Familiar Storyline

It’s a shame, however, that these characters are in such a mundane, limp movie.

Odds are that you’ve seen a buddy cop movie before. There’s also pretty good chances that you’ve seen a spy movie too. So when you combine the two together — a buddy spy movie if you will — you’re bound to see a bunch of shenanigans from mismatched pairs as aggressively suave figures roam around the outskirts of the movie. A Spy Who Dumped Me is no different in that regard. Actually, it painstakingly follows that formula.

Numerous twists, death fake-outs, and competing organizations — these are all the normal tropes that lackluster spy movies rely on for entertainment, and I’m pretty tired of it. I’ll admit that there’s certain elements that bleed their way into each film in a certain genre (demons/ghosts in horror movies, for example), but the best films find ways to subvert those familiar beats to add new meaning to them. I guess The Spy Who Dumped Me isn’t trying to do much more than provide a few laughs, but those jokes don’t do enough to prop up this movie. In the end, you’ll feel that Kunis and McKinnon were wasted.

An Odd Mesh of Tones

The oddest piece to The Spy Who Dumped Me is that it has considerable grit and violence. It’s as if the set pieces were created and filmed completely straight (without a comedic twist) only for Kunis and McKinnon to add jokes on the fly. It plays like a gritty action movie that just so happens to have jokes, not the other way around.

It’s a bizarre mixture that never becomes fully satisfying — it’s weird to see McKinnon crack one-liners after someone is brutally murdered. Granted, many films are devilishly violent and hilarious, yet The Spy Who Dumped Me doesn’t capture that same forthright, brutally carefree feel. It’s far too earnest to earn that distinction, filmed with limited visual flair. The Spy Who Dumped Me keeps you on your toes in a bad way, catching you off-guard when it looks to be funny or when it looks to be hardcore — the result is an odd, odd film that doesn’t stick the landing. The mismatched pair of Mile Kunis and Kate McKinnon are definitely good for a few laughs, but the story that they’re in doesn’t hold its end of the bargain. With a flimsy spy plot that’s full of unnecessary and implausible twists — not to mention predictable too — this movie never gets off the ground.

You might be casually entertained on a lazy afternoon, but then again, is that what we should hope for in a movie?

Thank you for reading! What are you thoughts on The Spy Who Dumped Me? Comment down below!

Oy. I suspected as much.

Ah I’m gutted this isn’t a great comedy as the trailers got me hopeful, but I am still looking forward to giving it a chance! Great review :)