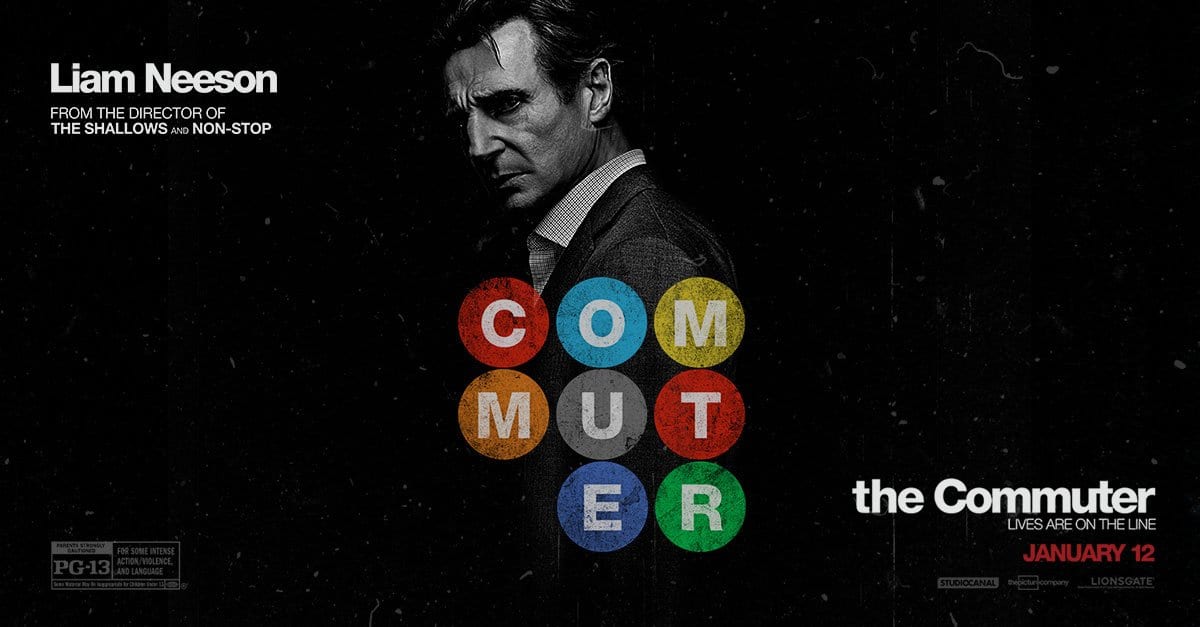 Even though he’s one of the most renowned actors working today, Liam Neeson is better known these days for his growing library of action films.  Paired up once again with director Jaume Collet-Serra, Liam Neeson’s latest action film, The Commuter, looks to contain more of the same thrills we’ve come to know.  The following review will be spoiler free. 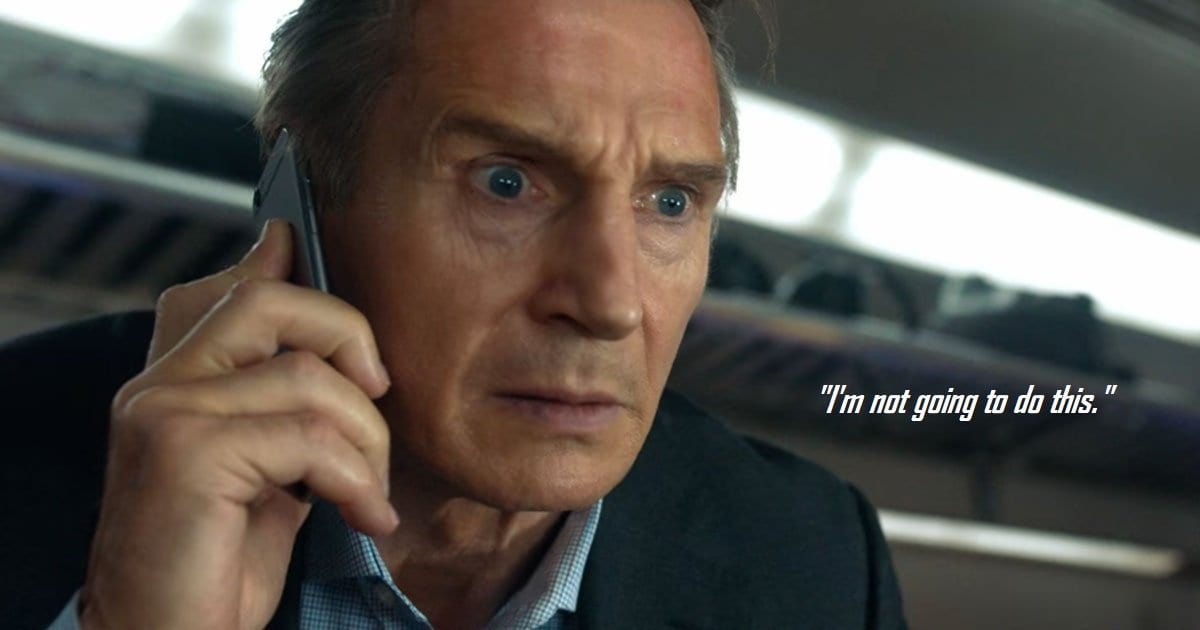 On his ride home from a day of work as an insurance salesman, Michael (Neeson) is confronted by a stranger named Joanna (Farmiga).  Joanna asks Michael a seemingly hypothetical question about his personality traits — or so he thought.  Michael becomes enwrapped in a dangerous puzzle, forcing him to find a passenger on the train before the last stop.  With knowledge that his family will die if he does not perform, Michael races against the clock to solve the puzzle that leads him into a massive conspiracy.

Director Jaume Collet-Serra has had an interesting career as a filmmaker.  If you take a look at his credits on Rotten Tomatoes, you’ll notice that most of his films end up somewhere around the 55%-60% range.  That sense of consistency goes a step forward as The Commuter is Collet-Serra’s fourth team-up with Liam Neeson.  That consistency goes even further as most of his films have serious twists and turns in a thriller/horror setting.

However, major studios have courted Collet-Serra on multiple occasions to helm major properties.  At one point in time, he was the frontrunner to direct Suicide Squad 2, but later removed himself from contention.  Now, his next directing project is Jungle Cruise starring Dwayne Johnson based on the Disney attraction of the same name.

If you ask me, Collet-Serra enjoys making slick, well-crafted B-movies.  His movies all have a certain “elevator pitch” quality to them.  But, they stay above all-out schlock because Collet-Serra has genuine talent as a director, creating interesting ways to film action and deception.

Whatever the case, Collet-Serra films are anything but boring, and they always find an audience that enjoys them.

Liam Neeson is Great as Always

No matter the quality of the movie, Neeson is always a great presence.  Whatever heights that the The Commuter has come from Liam Neeson, who brings his gruff nature to another gritty thriller.  His character in the film is an everyman, holding down a middling job as he works to finance his son’s college education.  He has a past that comes in handy as the plot progresses, but his general personality traits make him perfect for the nefarious events that unfold later in the film.

As with some lower budget films, the performances from supporting characters are less than stellar.  Thankfully, Neeson is always there to ground the film with a believable central character.  Unlike his other action films, Neeson is not a complete combat expert, leading to actual stakes as the film progresses.

Plus, it’s just so much fun to watch Liam Neeson grunt.  He combines his typically grizzly nature with believable confusion.  He has absolutely no idea what’s going on, becoming increasingly frustrated — and desperate.  These elements make it far more rewarding when Neeson begins to piece the puzzle together, making The Commuter work on a baseline level. 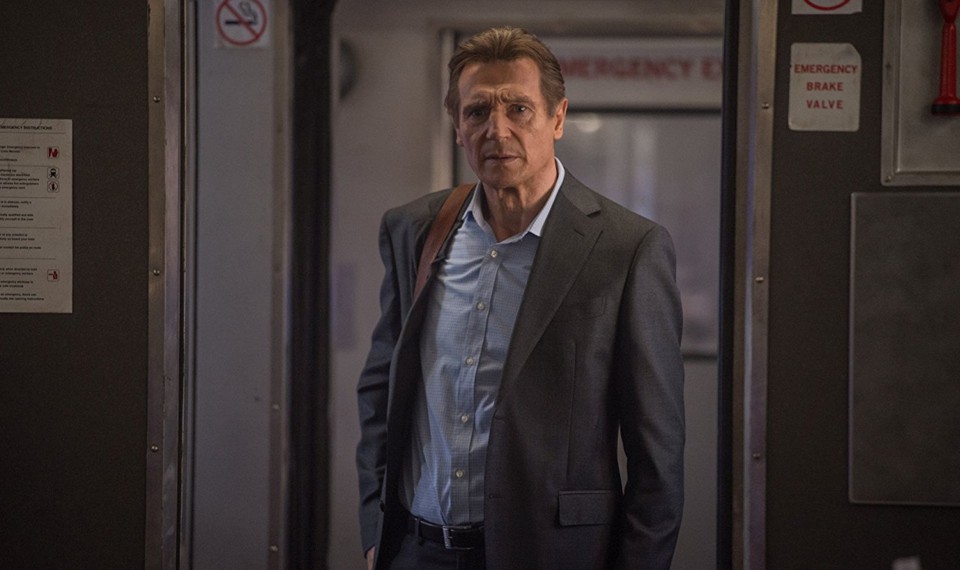 As I mentioned above, Jaume Collet-Serra always adds a definitive touch to his movies, and The Commuter is no different.  A movie that takes place in a train for practically the entire run time needs to continue to find ways to feel inventive.  You certainly get a lot of Liam Neeson walking back and forth down the aisle of each train car, but Collet-Serra keeps things interesting by filming similar scenes very differently.  Some sequences will have more edits, heightening the feeling of Neeson moving quickly to meet his deadline.  Others will slowly follow him from behind to create suspense.

The best example of Collet-Serra’s skills are during the action.  Rather than slap frames together to form incoherent fights, The Commuter clearly took its time in production to plan out its action sequences.  In fact, there’s one incredibly clever scene that is digitally altered to appear as one continuous shot — and it works quite nicely.

The worst part about January releases is that they have zero personality.  They take regurgitated plot ideas and blandly shoot them, crushing the souls of moviegoers everywhere.  Not that The Commuter should be graded on a curve because of the month in which it’s released, but this film has a clear personality that removes it from the cynicism that plagues January movies.  It’s much easier to enjoy a movie with that idea in mind. The Commuter is Destined to Become a Fantastic Cable Watch

That being said, there are inherent issues with The Commuter that keep it from working completely.  As seen in the trailer, the criminals have a bizarre omnipotence to their actions that hardly holds up to logic.  The way they operate is certainly a barrier to your enjoyment of the film as you must suspend disbelief for the plot to work.

The Commuter is bound to get compared to Non-Stop — and those comparisons are pretty fair.  It boasts some pretty solid intrigue in its first two acts, causing a decent amount of investment in the story.  But, its third act becomes unnecessarily messy in an attempt to try to make all the puzzle pieces fit.  As the exposition comes to light, you grow tired of it, wishing the movie had ended fifteen minutes prior.  As a matter of fact, the entire third act feels tacked on.

That being said, The Commuter is great for a passive movie watcher.  The film keeps moving, changing from a moment of intrigue to a clever set piece on a dime.  Those that are cleaning up around the house will occasionally look up and see something moderately entertaining.  They might even lose track of its logical inconsistencies and trick themselves into thinking that The Commuter is a masterpiece.

For those rainy, lazy days, you need a movie that is entertaining but not too intellectually challenging.  Remember, you’re in a quasi-vegetative state, incapable of putting three intelligible thoughts together at a time.  You need something to help you passively fire neurons from one side of your brain to the other as you slowly scroll through Instagram for the fourth time in the last fifteen minutes.  The Commuter is precisely that movie.  It has intrigue, but it won’t challenge you in any way.

The Commuter won’t ever win any awards, but it offers enough genre films for solid enjoyment.  Liam Neeson continues to excite as a grizzled action star, performing with enough weight to keep the film from falling completely off the rails (pun intended).  The logic of the film doesn’t exactly work out, but it’s believable enough for some to suspend disbelief to an extent and enjoy what it has to offer.

The Commuter is a silly film that understands what it is: a well crafted B-movie.  Its destiny is to become a fantastic cable watch on HBO. Thanks for reading!  What are your thoughts on The Commuter?  Comment down below!

[…] In a nutshell: The Silence of the Marsh is full of missed opportunities. You cannot deny the loose ends. Nor the characters that are not fleshed out. There are, however, three elements that stand out. There is the city of Valencia, as an intriguing background. It almost even serves as an extra character, especially in the second half of the film. Moreover, the movie bathes in a dark atmosphere. And finally, there are some excellent performances. If you don’t mind the imperfections, this could be a good movie for a lazy Sunday afternoon. […]

Thanks for your in-depth review. I’m looking forward to catching it. ?

Meh, not too interested in seeing this one. Good review though.

Thank you!!!! If you were ever to see it, it’s definitely better to wait until HBO or streaming! No one should pay full price for it lol

I have to admit, I enjoy these January/February Neeson pictures. Even the mediocre ones. I think it’s because my expectations are always in check. They definitely will be with this one.

That’s definitely the right way to approach it! However, it appears that studios are beginning to realize that they can make some serious money in those months as well. Big movies like Black Panther are now early year movies, and that’s pretty cool!

Indeed. February, right? Several years ago we saw that when studios began movies some of their bigger pictures to November. I would love to see the same thing happen for the early months.

Yup! We also have Annihilation in February too, could be a great science fiction flick!

You know, I quite agree with you! I quite enjoy the films that this guy directs; they’re never amazing, but they’re not meant to be. They’re just sort of your average, yet overall, fun and possibly thrilling films to keep you entertained for a while, and I’m quite good with that. I enjoyed Unknown, Non-Stop, and even The Shallows to a degree. And I can’t wait to see this film either.

I wonder how this style will translate to Jungle Cruise though.

Who knows! I have no idea how they’ll make a story out of it. But, Pirates of the Caribbean worked out so we’ll see! (well, the first one worked out at least ?)

Glad the movie did not fall completely off the rails (loved that pun by the way ?). Usually I like these type of action movies, and Liam is always enjoyable (well almost always). So I guess I will check this out at some point. Great review!

Thanks so much! Definitely wait until cable or Netflix. This is fine movie, but nothing you should pay full price for!