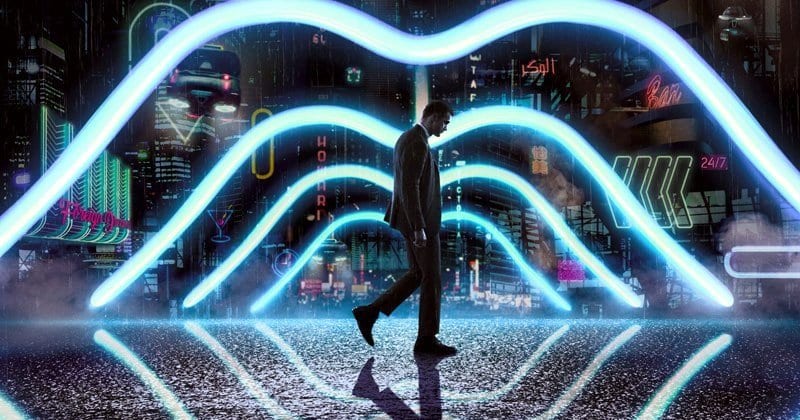 Passion projects are a big part of the industry.  Creatives minds sometimes have to labor through years in development hell to make their dreams come to the big screen.  As for director Duncan Jones, Mute was that project for many years, and Netflix finally helped him bring it to the big screen (or whatever size screen that you use to watch Netflix).  The following review will be spoiler free. 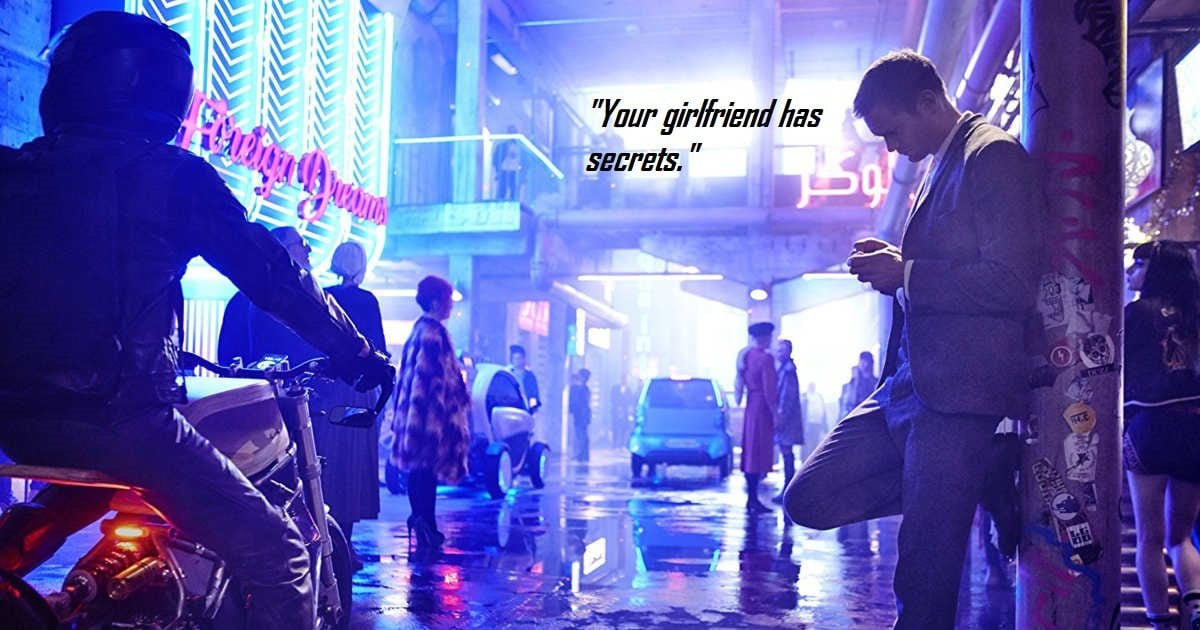 As a young boy, Leo (Skarsgard) was brutally injured in the water, damaging his vocal chords.  As part of the Amish community, his mother refused to allow Leo to get surgery, causing him to grow up as a mute.

Now, in a futuristic Berlin, Leo is a bartender at a club in the seedy part of town and enjoys spending time with girlfriend Naadirah who looks passed his condition and truly loves him.  But, Naadirah inexplicably disappears in a blink of an eye, forcing Leo to spend all hours of the day searching for her.

As he creeps further into the underbelly of the city, Leo becomes entangled with Cactus Bill (Rudd) and Duck Teddington (Theroux), two mob doctors that have their own plans in mind.

As mentioned above, Duncan Jones has wanted to make Mute for quite some time.  To get a sense for the timeline of it all, Jones has called Mute a “spiritual sequel” to his 2009 film Moon.

That film was Duncan Jones’ directorial debut, and overwhelmingly positive reviews allowed the filmmaker to move forward to other projects such as Source Code and Warcraft.  With such success earlier in his career, one had to wonder: what was stopping Jones from filming Mute?  Reports have claimed that Jones was working on the project even before Moon was released.  Could it maybe have been a sign of the final product to come?

Regardless, Netflix finally helped Duncan Jones get his passion project made.  It’s no secret that Netflix has been working to create more big budget content for its subscribers, and the business entity hoped that doing a favor to a rising talent would pay dividends down the road. 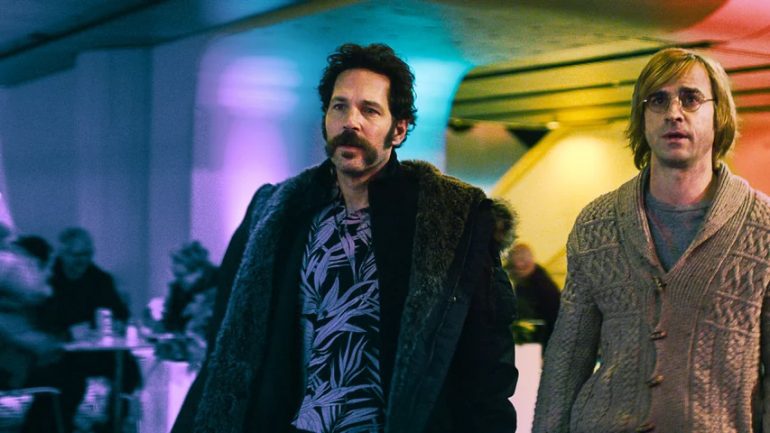 image via What’s on Netflix

Whatever your personal gripes with Mute may be, many will agree that the film’s visual aesthetic is quite impressive.  Duncan Jones has exclaimed that Ridley Scott‘s Blade Runner was a huge influence on Mute, and it’s pretty obvious from the first frames of futuristic Berlin.  There’s an extra tinge of neon that adds to the sleaziness of the city which makes it come off as fake as the breasts of a robotic stripper in a local lounge (no, seriously).

However, Mute has released at exactly the point when Cyberpunk content has hit its saturation level.  With Blade Runner 2049‘s release last fall to the launch of Altered Carbon on Netflix earlier this month, Cyberpunk just feels tired — and so does Mute.

To stand out from a subgenre that has become tired recently, Mute needed to make stylistic and plot choices that set it apart, which it does but in the wrong manner.  Mute has an alarming amount of time set aside to glorifying rapists, sadists, and pedophiles which are all overtly disgusting.  That’s not to say that film needs a place for the pure, but Mute romanticizes these elements to an unnatural degree.  After awhile, you begin to realize that there isn’t a narrative point to Mute’s fascination with sexuality and reprehensible behavior; it’s merely window dressing to a plodding mystery.

Speaking of window dressing, the Amish roots and silent disposition of our main character are essentially meaningless to the plot.  Alexander Skarsgard does a fine job in the role, but his character is given limited range, forcing Skarsgard to stare blankly into the distance as people call him stupid due to his inability to speak.

Skarsgard rotates between a few facial expressions, including this one: 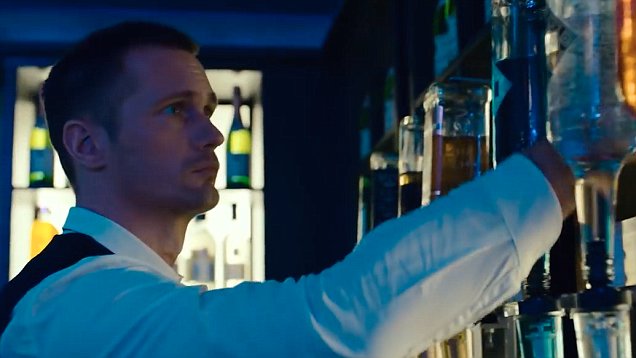 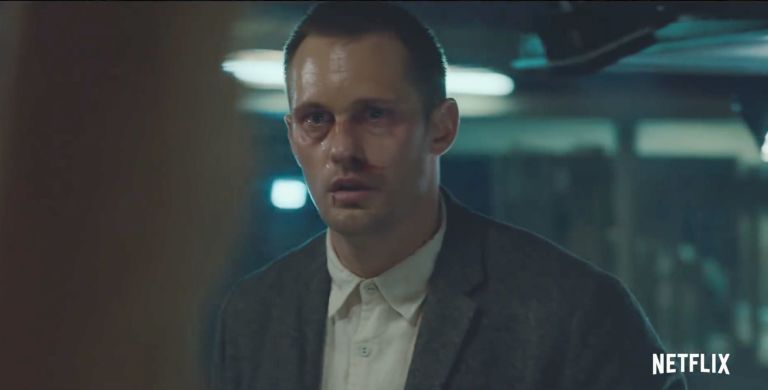 Every so often, Skarsgard is allowed to express himself which makes you wonder: where was this the whole time?  Skarsgard is a charismatic man, and forcing him to stare blankly into the distance is such a waste.  The combination of being mute with stoic facial expressions severely handicaps the emotional core of the story.  Given that all that you know about Skarsgard is that he’s mute, it’s incredibly difficult to feel attached to him in any way whatsoever.

On the hand, Paul Rudd is doing something weird as Cactus Bill (anyone with that name should be a little loopy).  While sporadically entertaining, it removes the focus from Skarsgard who is at the center of the main storyline.  Cactus Bill and Duck Teddington mess with the tone of the movie as well, but that’s an entirely different conversation that deserves its own article.

Mute Can’t Decide on What Story to Tell

There are two stories that come to a head during Mute.  On one side, we have Alexander Skarsgard searching for his blue-haired girlfriend and exploring the underbelly of Berlin.  On the other side, we have Paul Rudd’s plight to get his papers so that he can leave Berlin altogether.  Realistically, either story would work as a the main story of a film, and switching back and forth between the two in one 2-hour film causes serious problems.

The time between the two stories is split down the middle; Duncan Jones hard cuts between them.  As a result, Mute struggles to provide enough depth to either story, pulling out the emotion in a story that needed it to succeed.  Heightened characters like Cactus Bill and Duck Teddington become two-dimensional cut-outs that come off as aggressively shallow even thought Mute sets them up for an emotional backing.  Conversely, Skarsgard’s desperate attempt to find his loved one never has the dramatic flair that it needs.

It feels as if Duncan Jones focused primarily on creating a fully realized world, but that pursuit sapped away all the intrigue of the plot.  You’re left with the barebones of a story that never gets close to inner resonance.  The elements of Mute are in a constant state of conflict, and nothing comes out of it as the winner. 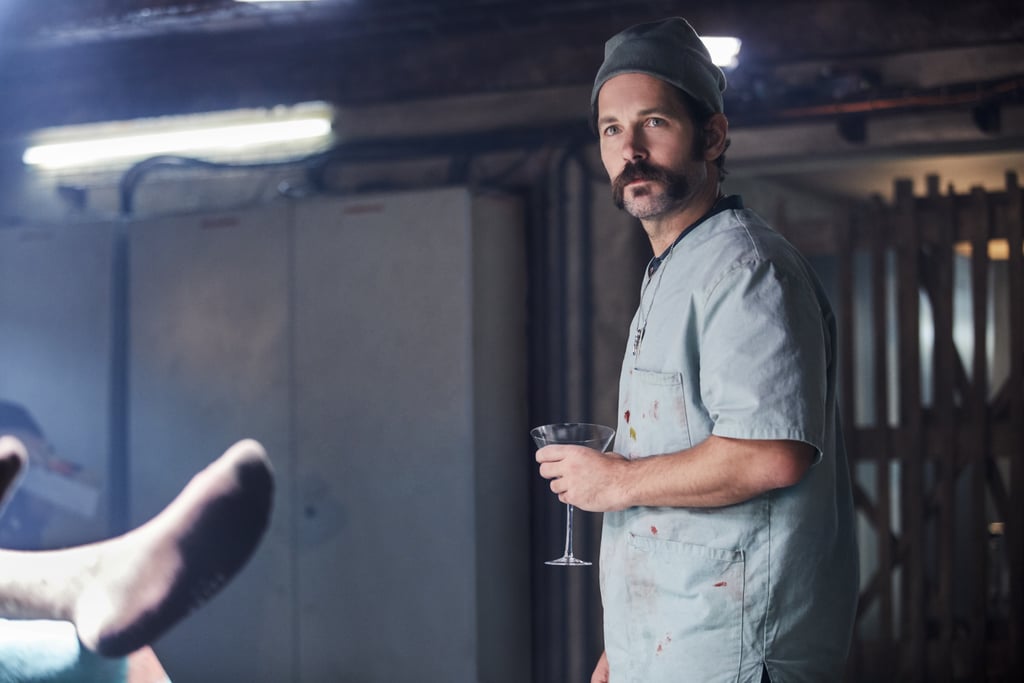 Mute is too bizarre and strange to completely cast aside, but it’s still a serious, serious mess.  Instead of focusing on one fascinating story, Mute has two stories jostling for screen time, making both undesirable in the end.

With largely unlikable and somber characters that add no personality (or in some cases, the wrong personality) to each scene, you’re left to passively watch as the story slowly unfolds.  By the 30-minute marked, you’ll be staring at your phone.  By the hour and a half mark, you’ll contemplate turning Mute off altogether.

While I’m all for allowing people to chase their dream projects, one has to wonder why Duncan Jones wanted to direct Mute so badly.

Thanks for reading!  What are your thoughts on Mute?  Comment down below!

[…] cinema is an interesting subgenre that has entered the lexicon for films. It’s a term that was coined by journalist and poet […]

Thanks for this post. I’ve seen the title on Netflix and was thinking of watching the movie. Now, I won’t bother :)

Wow I did not know this film existed, now I know not to waste my time with it. Thanks for the review.

It is, hands down, one of the worst films I’ve seen in recent memory and this includes some low-budget indy horror stuff.

I can’t really argue why you’d feel that way lol! Honestly, that D+ grade I gave was a little generous ????