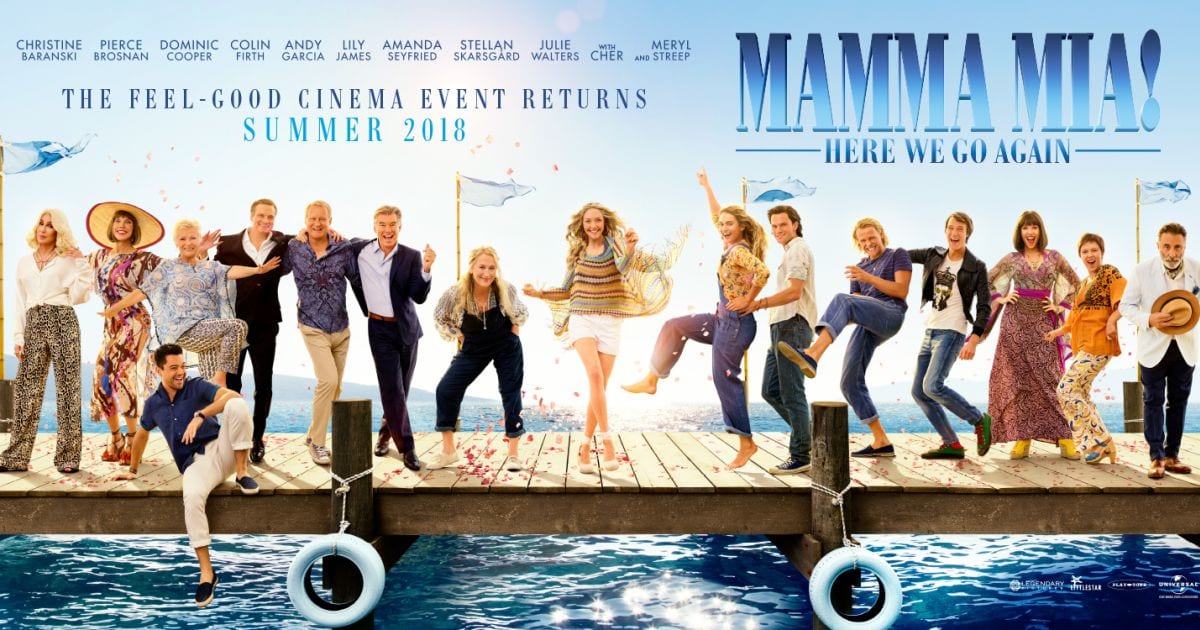 We’ve been down this road many times before. A film overperformed greatly at the box office years ago only to get a sequel many, many years later as a studio became hungry for cash and sifted through its known properties. This time, it’s the jukebox musical Mamma Mia! Here We Go Again. Many were delighted to see the series that loves ABBA music return once again, but for me personally, this sequel doesn’t do much to justify its existence.

Mourning the loss of her mother Donna, Sophie (Seyfried) looks to reopen the hotel that Donna created years ago on the island of Kalokairi to honor her loving memory.

As Sophie prepares for the event, her and those close to her reminisce about a young Donna (James) and how she met a young Bill (Dylan), Harry (Skinner), and Sam (Irvine). After a few trips down memory lane, it becomes fairly obvious that Sophie is following in Donna’s footsteps.

If you don’t recall, Mamma Mia! was a monumental hit back in 2008. Estimates pointed towards a $52 million budget for the musical comedy, so its worldwide intake of $615.7 million was an exorbitant amount of cash — about twelve times the production budget in fact.

When a studio has such a runaway hit like Mamma Mia! that was considered a mid-budget endeavor, it’s only a matter of time before a sequel or some other derivation comes along. Universal Pictures co-chairman David Linde said as much in an interview when he noted that a sequel would take some time, but it could definitely happen. Well here we are ten years later!

If you ask me, the delay of the sequel has one major benefit going for it: nostalgia. You’d be lying to yourself if you didn’t think that ABBA songs that were featured heavily in the trailers for Mamma Mia! Here We Go Again filled music lovers with that warm fuzzy feeling that nostalgia brings to film. It seems to have paid off at the box office too as Here We Go Again became one of the highest musical opening in North American history over the weekend. 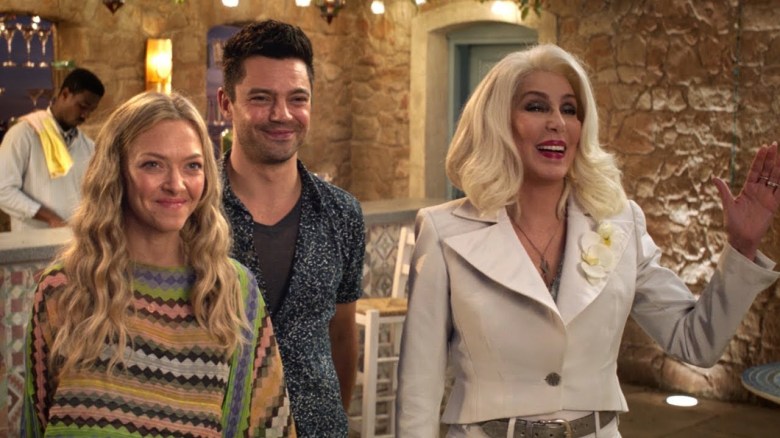 Lily James and the Music are Utter Delights

The time between the first Mamma Mia! and its sequel allowed for some fun influx of young talent with actors playing young versions of Pierce Brosnan, Colin Firth, and Stellan Skarsgard, but the main star here is undoubtedly Lily James as a young Donna, the character played previously by Meryl Streep.

I’m developing quite the professional crush on Lily James. She continues to dazzle just about every single time she appears on the silver screen. As it pertains to her performance in Mamma Mia! Here We Go Again, she fully embodies the free-spirit nature of the Donna character as she looks for thrills in life rather than the safe, stable outcomes that most of us desire. As she states in the film, she wants to go out into the world and “make some memories.” That attitude is always apparent, especially as she bounces across the screen to those infectious ABBA songs.

As a young professional male, I’m certainly not in the key demographic that this movie caters to. Still, you’d have to be made of stone or desperately clinging to your masculinity not to find some sort of enjoyment in these dance numbers. They exude fun and brightness (even to a fault). If you want pure escapism, these songs definitely contribute to that feeling.

I must admit, however, that most of the feelings created from these songs are merely replicated from the first film. Mamma Mia! Here We Go Again is in a tough spot since they only have so many ABBA songs to play with when making these dance numbers, and only a fraction of those songs are incredibly popular. The best song and dance moments were already displayed before in the original Mamma Mia!, making it incredibly difficult for the music in Here We Go Again is stand on its own.  Sure, this movie has incorporated different ABBA songs into catchy, toe-tapping sequences, except they blend into the background.

Since so much of the soundtrack is a retread, or at least the most popular pieces of it are, Mamma Mia! Here We Go Again isn’t creating many new scenarios or emotional feelings. Ironically, the subtitle ‘Here We Go Again’ plays into that lackadaisical feeling. 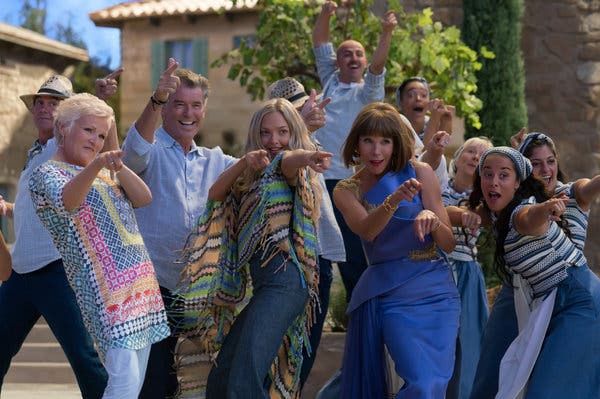 The Plot of Mamma Mia! Here We Go Again Fails to Justify its Own Existence

It’s clear right from the beginning that Here We Go Again is using the framing device of a young Donna to show that the path Sophie chose in life is connected to her mother. It’s in this device that Mamma Mia! Here We Go Again surpasses the original — it has way more heart injected into its central story.

Ironically though, that same storytelling path hinders true emotion from growing. Each side of the story takes away from the other, keeping the emotional beats from feeling earned or truly thoughtful. Characters fall in love or go through amazing changes in a mere two-minute song. It’s very haphazard and, even worse, easy for these characters. Plenty of deus ex machina moments are played off as fun in this movie’s desire to show excessive fluff. Even though the movie’s heart is in the right place, that mother-daughter relationship never gets beyond trite sayings that shamelessly fish for tears. I’m all for excessive fluff and optimism in my films — just make sure that they’re earned!

Most moviegoers that head out to the theater to see Mamma Mia! Here We Go Again probably aren’t concerned with a strong, cohesive plot. They want to see fun, colorful dance numbers. I can certainly respect that desire as a fan of the arts. In that case, you don’t need this review to help you decide whether or not you should see this movie. Your mind has already been made up.

Admittedly, I’m not the part of the audience that Mamma Mia! Here We Go Again plays to, but then again, I shouldn’t need to be to enjoy it. It’s filled with wonderful music and delightful set pieces, but it’s those connective elements that us movie snobs like to call “the plot” get in the way. The edges of this story are smoothed out completely to the point where admitting that this movie is a light musical isn’t enough to justify radical swings in character emotions.

I don’t blame those that enjoy this movie, but I simply don’t share that love.

Thank you for reading! What are you thoughts on Mamma Mia! Here We Go Again? Comment down below!

[…] from the bubbly, fun theatrics of the stage musical-turned-film Mamma Mia! and the engaging, nuanced study of one of Great Britain’s most polarizing prime ministers, in the […]

[…] series (2010-2015), his CV reflects a diversity of roles. As the most senior of the main cast, Pierce Brosnan may be best known for his time playing James Bond. But, like his colleagues, his career over the […]

As a professional male I was the target demographic. I actually believe only three or four songs were retreds like (SPOILERS) Mamma Mia, Dancing Queen and a very subtle version of SOS. I’m also developing a crush on Lily James even if she couldn’t capture Meryl Streep’s stature. The movie also had less life, lacking in choreography and exaggerated moves, but the joy just couldn’t get in the way of my enjoyment.

Agree. Here We Go Again has nice visuals, nice music, weak story line. Not sure that last bit matters though if you’re on a search for a feel-good film.

You’re so right, and that’s why I tried to include that in the piece. There’s so many people out there that just want fun songs and beautiful people to make them happy, and I say good for them if that works!

My wife and I recently saw this movie. We both loved the play and she really liked the first movie. It would not have been my first choice, but this was a birthday present for my wife.

After seeing it, it is still probably not something I would have gone to on my own, but it was not all that bad. After a rather poor start with an obscure “Kiss the Teacher” song at the very beginning, the movie held its own OK. It is the backstory of how Donna met, and bed, the three fathers while her daughter is planning the opening of a B&B in the house that Donna had lived in when her daughter was born.

I thought that Lilly James did a very nice job as the young Donna. She has an excellent singing voice.

Most, but not all, of the music is definitely 2nd tier Abba – not all that well known. There are a few songs from the first movie – “Dancing Queen” and “Mama Mia”. The songs they did have fit fairly well into the narrative of the film.

The film was not great, by any means, but not just simply a rip-off sequel either.

I think we share similar feelings. The music just didn’t do much for me since all the best parts were recycled from the first movie. But most importantly, that mother-daughter relationship just didn’t work very well for me as I explained in the review. Ohh well, maybe Mamma Mia! Here We Go Again…Again will be better 😂😂