The 20th Anniversary of My Childhood: ‘A Bug’s Life’ 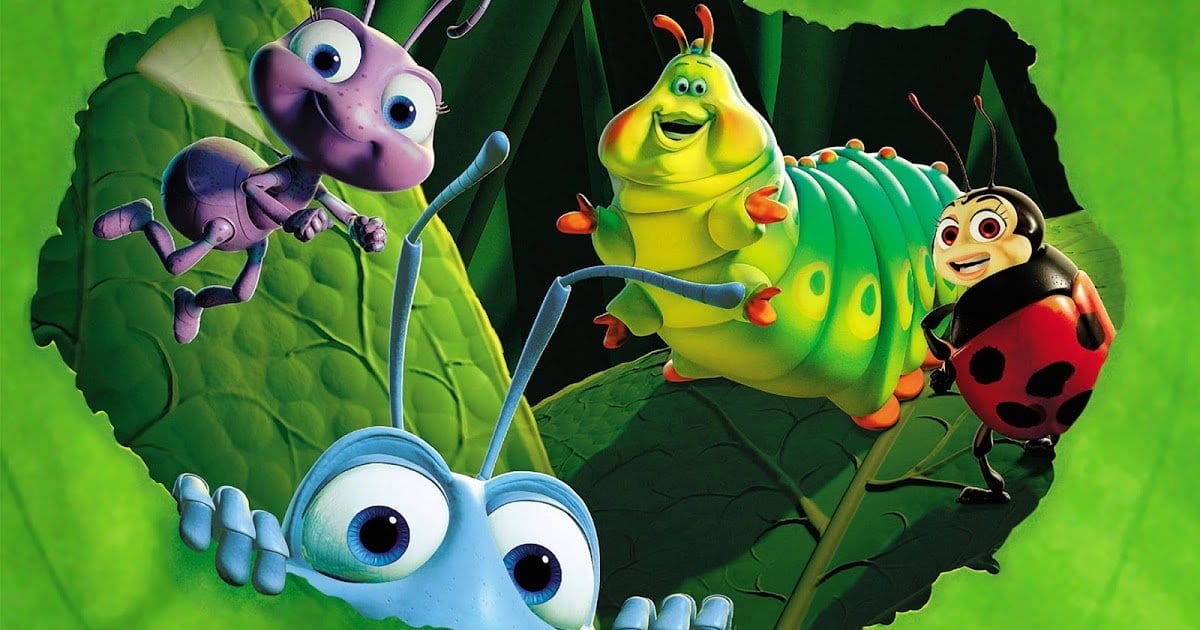 When I was a kid, I remember watching A Bug’s Life (1998) over and over and over. I had quite the interest in bugs. I used to catch grasshoppers and potato bugs (pill bugs or roly polys to some of you) in the summers and my nickname was even “Bug.” So, I guess it was really no surprise that I would absolutely love A Bug’s Life.

This November, the film will celebrate its 20th anniversary. So, I ‘d like to take this opportunity to say thank you, Pixar, for making my childhood one to remember. To me, A Bug’s Life is one of the most underrated Pixar films ever made.

A Strange Message, But It Works!

I never realized what a grown-up message A Bug’s Life gives to kids until I grew up, but it doesn’t really diminish the movie’s value in any way. If anything, it only adds to what a great film it is.

A Bug’s Life reminds me of Zootopia (2016) in that its message is much more adult-like in nature; it shows kids that there is strength in numbers and that one cannot be subservient to a dictator. It shows the power of revolution. Of course, there’s the ordinary morals like how friends help one another and we all must forgive each another, but the vaguely communist message is actually quite interesting.

It could be that I’m reading way too far into this (not the first time), but I just really like how subtly this message is conveyed. Especially in a day and age where protest is common, the message remains relevant today. It shows kids to stand up for what’s right, even if it seems scary. And if you’ve got friends on your side, you can do anything.

Sometimes you watch an animated film and wonder what was going through the director’s mind when they cast the film. Not with A Bug’s Life though. The amazingly talented cast — Dave Foley, Kevin Spacey, Julia Louis-Dreyfus, Hayden Panettiere, Phyllis Diller, David Hyde Pierce, Denis Leary, Bonnie Hunt, and John Ratzenburger — blend together beautifully.

I know I may catch flak for this, but I believe one of the greatest voice acting performances goes to Kevin Spacey. While I am no longer a fan of his for obvious reasons, I do really enjoy his performance in this film just for how natural it feels. He isn’t trying too hard and the dialogue just seems to naturally flow, which is hard to do in voice acting.

Veteran voice actors like Hayden Panettiere, David Hyde Pierce (whom I’ve loved ever since Frasier), Bonnie Hunt, and John Ratzenburger really create a spectacular cast that makes the movie glide all the way through. Like I said, that’s hard to do and even Disney movies sometimes don’t get it right. But A Bug’s Life is one of those few movies that truly goes above and beyond in the world of voice acting.

I’m a sucker for a good score, but I really wasn’t expecting to find one in a Pixar film. Of course, when I learned that Randy Newman composed the score, I wasn’t that surprised. Cousin to Thomas Newman, one of the greatest composers in Hollywood, Randy Newman’s scores never fail to inspire the viewer.

The score is motivating in its own special way and really fits the whole revolutionary concept of the film. Yet, it still retains the lazy, relaxed atmosphere we expect from Randy Newman, reminiscent of his work in Toy Story (1995). Of course, there are moments when it can get shockingly intense, such as during the final battle. Newman definitely knows how to create a mood for a film.

Also peculiar, this is a score that can get stuck in your head. Some scores just aren’t memorable. If I asked you to hum the score for Finding Nemo (2003) right now, would you be able to do it? I know I couldn’t (if you can, I commend you). Yet, I could hum the score for A Bug’s Life right now if you wanted me to. It’s just one of those film scores that sticks with you and makes the film all the more spectacular.

As always, 1990s Pixar Studios scores a home run with the animation skills in A Bug’s Life. Compared to films nowadays, such as Frozen (2013) or Moana (2016), the animation really isn’t anything special. But, for the time in which it was made, A Bug’s Life really had some great visual effects that no other movie could claim.

I’d even wager that the animation could even compete with today’s films. Take a look at this.

It’s just a picture of some bugs on a blade of grass, but it’s rendered perfectly. No matter how much Disney improves its animation to match Pixar, they’ll never reach this level of innovation. This was the 1990s when we still had pretty basic animation like The Hunchback of Notre Dame (1996) and Aladdin (1992). Yet, A Bug’s Life made great strides in the genre and forged the way for better animated features and graphics. In the world of animation, this is a highly underrated film.

I found A Bug’s Life funny when I was a kid and I still find it funny today. A Bug’s Life makes me long for the old days of Pixar when they’d hit that sweet spot in creating films for kids and adults. When I was a kid, I laughed at the stupid grasshopper, Molt. Now that I’m 19 and in college (I guess I still am a kid), I still laugh at Molt, mostly because I understand more of his jokes.

There’s a lot of little references and innuendos that I never caught on to when I was younger that I find hilarious now. That’s the magic of Pixar — they’re able to capture an audience throughout their lives by packing their films full of little details that you can only catch if you keep watching. There are some films I found funny as a kid that I can’t watch anymore because I just find the humor too insufferable, but this is definitely not one of them.

Also, this was one of the film’s Pixar made that included bloopers, which I still find such a clever idea to this day. For your entertainment, here they are!

Quit Sleeping on A Bug’s Life!

Seriously, A Bug’s Life is one of the Pixar’s best films and yet I barely hear it talked about anymore. It has a great message for kids and adults, the score is beautifully moving, it’s visually appealing, and it’s absolutely hilarious. It’s time for people to wake up and rediscover this magnificent gem of cinema. And writing about it has made me want to rewatch it, so if you’ll excuse me…

Thank you for reading! What are you thoughts on A Bug’s Life? Comment down below!

The plot comes from ‘The Magnificent Seven’, and before that ‘Seven Samurai’.

Dude I totally forgot about that! Interesting plot for a kids’ movie lol

I still quote the line “stay away from the light, I can’t help it it’s so beautiful” all the time…

I don’t get it…but to be honest I think it’s my age… I was 14 when it came out (same with Mulan, Hercules, The Incredibles) I think I was just a stroppy anti-Disney teenager (rest assured I’ve got over that) I’m glad you have good memories of it though :) x

Great article, Kali! I absolutely agree that A Bug’s Life is criminally underrated. I also feel the same about Spacey. He is “cancelled” at this point, but he is perfect in this movie.