Which is the Better Satire of Fandom: ‘Fanboys’ or ‘Austenland’? 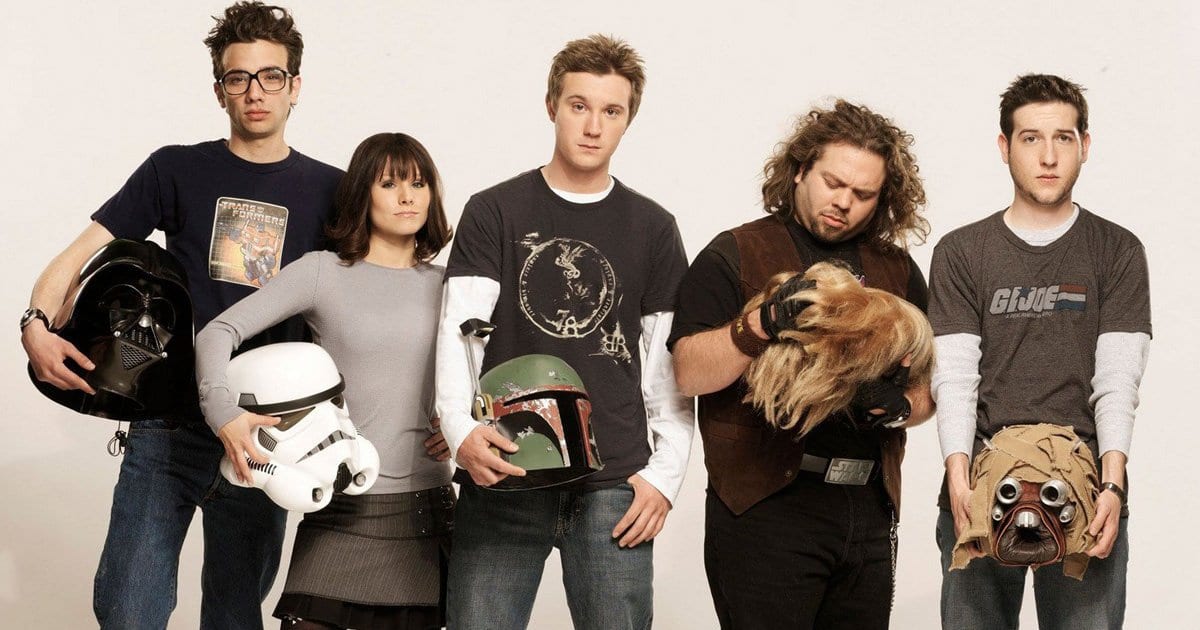 When a screenwriter or screenwriters sits down to write a fan satire, they are walking a fine line. While the satirical elements must be present in the narrative, the fan base must feel like they are not being laughed at or used as a lesson on how not to be act or behave. Fanboys hit theaters in 2009. Austenland was released into theaters in 2013. The question is, which film balances satire and the fans, and which doesn’t?

Fanboys is set in 1998, right before the release of Star Wars Episode I: The Phantom Menace. A group of friends who are die-hard Star Wars fans drive across country to George Lucas’s Skywalker Ranch.  With one of the guys in their group is dying from cancer, their goal is to break into the ranch and get their hands on the movie before it is released into movie theaters. Starring Sam Huntington, Chris Marquette, Dan Folger, Jay Baruchel and Kristen Bell, will this group of Star Wars fans complete their mission?

Based on the book of the same name by Shannon Hale, Jane Haynes is proud to define herself as a true Janeite. Jane is the ultimate fan-girl, her obsession with the 1995 Pride and Prejudice miniseries has gotten to the point where it is the end all and be all of her life. In her 30’s, American and single, Jane travels to a Jane Austen-style theme park in England to find what she hopes will be her own Mr. Darcy.  Starring Keri Russell, Jennifer Coolidge and JJ Feild, will the experience reinforce Jane’s fandom or will it give her a hard shake of reality?

As both a fan of Jane Austen and Star Wars, I have very strong feelings about both films. One works as a fan satire and one doesn’t. Here is why:

Fanboys Works As A Fan Satire

Fanboys works as a fan satire on two levels. It works on one level because as a film it is incredibly funny.  While it helps to know something about the Star Wars films, one does not need to know every little detail about the Star Wars universe to enjoy the film. At its heart, it’s a sweet road trip story of a group of friends who go out of their way to make their dying friend’s wish become a reality.

On another level, there are plenty of in jokes and references that only a true fan would understand. It also helped that there are multiple cameos in this film. The list of cameos includes Seth Rogen, William Shatner and Kevin Smith (who himself is a big Stars Wars fan). My personal favorites are of course the Star Wars alums, the late Carrie Fisher and Billy Dee Williams. From my perspective, this film is a love letter to the millions of Star Wars fans around the world who have loved, adored and cherished this universe for over forty years.

Another good example of a fan satire that is both funny and allows the fans to laugh at themselves instead of being laughed at is Galaxy Quest (1999). Starring Tim Allen, Sigourney Weaver and the late Alan Rickman, the film about a group of actors who starred in a Star Trek type show in the early 1980’s. While the actors are unable to find work, the fandom surrounding their show is the only thing that is keeping their careers alive. Nearly twenty years later, an alien species on the brink of extinction by a powerful enemy comes to Earth to recruit these actors to save them, believing that they are their characters.

Austenland Does Not Work As A Fan Satire

I’m going to just say it, because there is no other way. Austenland is an insult to every woman who calls herself a Janeite. Jane Hayes is a caricature. Every fandom has a stereotype. The stereotype of the Jane Austen fan is that she is bookish, shy, her dating life is severely lacking and her ideal man (i.e. Mr. Darcy) is fiction.

I know plenty of women (myself included) who count themselves as Jane Austen fans, but are far from the stereotype. While we adore Jane Austen and the literary fictional worlds that she created, it is not the center of our universe. We have vibrant social lives, thriving careers and some of us (shockingly) may have romantic partners or spouses. While we may melt at the thought of Colin Firth coming out of that lake in a wet, white shirt, we know that he is just an actor playing a fictional character.

The film does have one or two decent moments. Jennifer Coolidge has the funniest lines in the film. JJ Feild (who played another Austen hero, Henry Tilney in the 2007’s Northanger Abbey), is certainly easy on the eyes. While his casting as Mr. Henry Nobley is a wink-wink nudge-nudge to the Janeite community, it’s not enough to overcome the film’s shortcomings.

The film is supposed to feel like a satire and a lesson about reality vs. fantasy. But in the end, from my perspective, it’s just another flat and predictable romantic comedy with Jane Austen’s name attached to it. Trust me when I say that attaching the name of Jane Austen to a project, especially a romantic comedy is not always a guarantee of success.

To Sum It Up

Any solid narrative is a balancing act. It is the writer(s) job to create a credible story with credible characters while ensuring that the audience is able to get into the story. When it comes to the fan satire subgenre, that balance is extremely delicate. It takes a skilled writer to create the satire while respecting the fan base. While Fanboys succeeds in this task, Austenland fails. Miserably.

Thank you for reading! What are your thoughts on Fanboys and Austenland? Comment down below!