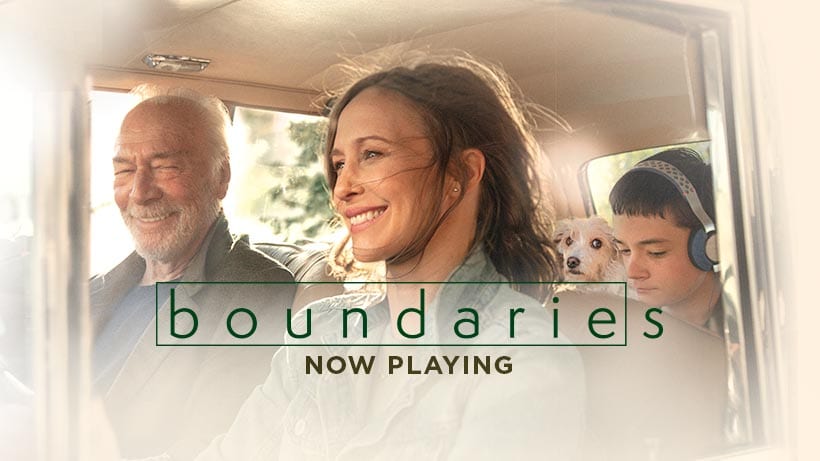 From Sony Pictures Classics, Boundaries is the latest road trip movie to come to theaters. You would think that a movie with a solid cast that includes Vera Farmiga, Christopher Plummer, Lewis MacDougall, Christopher Lloyd, and Peter Fonda would lead to quality entertainment, but Boundaries does not, and it might speak to the growing boredom with road trip movies in general.

A single mother living in Seattle, Laura (Farmiga) has a constant need to put animals before herself, caring for almost a dozen animals on a daily basis. She uses this arrangement as a coping mechanism as her father Jack (Plummer) hasn’t exactly been a good influence in her life.

But when Jack is kicked out of his retirement home for his insistence in selling marijuana out of the building, Laura and her unusual son Henry (MacDougall) must drive him to her sister’s house in Los Angeles. And during the trip, Jack makes a few stops to sell his product with a little help from Henry — unbeknownst to Laura.

It seems like every film has some type of controversy tied to it these days.

Leading up to the release of Boundaries, Peter Fonda went on a tirade on Twitter (as many people do these days) where he, among other things, attacked Barron Trump, saying that he should be “ripped from his mother’s arms and put in a cage with pedophiles” following news that children were being separated from their parents at the U.S.-Mexico border.

Peter Fonda’s comments are abhorrent, reckless and dangerous, and we condemn them completely.  It is important to note that Mr. Fonda plays a very minor role in the film.  To pull or alter this film at this point would unfairly penalize the filmmaker Shana Feste’s accomplishment, the many actors, crew members and other creative talent that worked hard on the project.  We plan to open the film as scheduled this weekend, in a limited release of five theaters.

Many have claimed that the original five theater release of the film was damaged by Fonda’s actions as the film went on to earn just $29,552 for a per-theater average of about $5,910.  That sentiment is only compounded by the film’s abnormally low IMDb score of 3.4/10 which is clearly a sign of protest by the masses. For reference, The Room has a score of 3.6/10. Solid Performances All Around

With such a great cast on paper, you should expect some great performances in Boundaries, and it has a lot of them!  Realistically, this movie’s cast is over-qualified; they have to do so much with very stale character outlines.

Christopher Plummer is the stock distance father figure who is a free-spirited, morally ambiguous individual that plagues most of these road trip movies. There’s just one difference: Christopher Plummer is unbelievably charming. He’s such a pro, providing biting humor that deflates scenes that come close to overdosing on schmaltz.

Vera Farmiga acts in direct contrast to Plummer; they’re perfect foils for each other.  Farmiga’s performance has a certain manic quality that is really well-performed. She never balls up in the corner in a fetal position, but she’s always close. Her character is always on the verge of the anxiety attack. She’s forced to breathe heavily and quickly find ways to derail her spiral from spiraling any further.

I must also mention Christopher Lloyd, who plays another oddball in a supporting role.  He’s as funny as ever! image via The Austin Chronicle

Boundaries Lives Off of Genre Clichés

Then again, this is a road trip movie with a single mother and her quirky child with a less than ideal father along for the ride — it doesn’t take a quantum physicist to figure out where this story is headed. That’s normally the downfall for most road trip movies. From the beginning, you know the physical and thematic end points, and it’s up to the movie to make that journey worthwhile, to make it entertaining enough so that the viewer is okay with its familiar finish. Only a few movies accomplish this feat — Logan comes to mind as a recent road trip film that flips genre conventions.

In that respect, Boundaries is an extremely difficult movie to discuss in a spoiler-free format. It finishes exactly where you think it will..and it doesn’t deviate from the formula to get there.  Whether it’s running into a former lover or meeting old, eccentric friends, Boundaries hopes that you haven’t seen too many movies in this subgenre before. 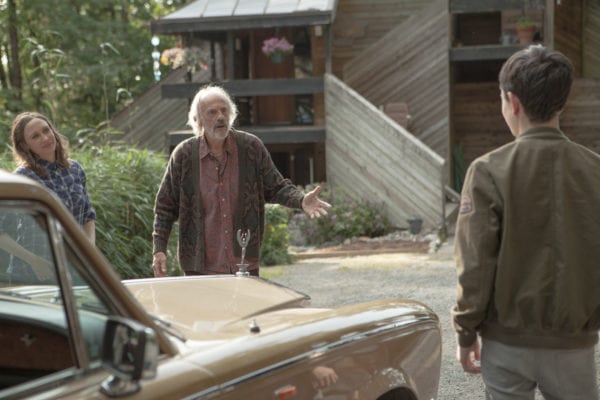 Boundaries is way too competent to completely cast aside as slop, and its over-qualified cast brings spurts of life to this story. But in the end, this movie is so, so stale.  It never has much energy, leaving the viewer to wonder if there were better ways that they could have spent their time.

The central theme of Boundaries isn’t a surprising one. It looks at fractured family dynamics and how they affect individuals, a noble endeavor that is quite relatable to many people.  According to a study conducted by the U.S. Census Bureau, over 23% of households were mother-only back in 2010.  Immediately, Boundaries appeals to so many human beings purely on character construction.  Still, this movie is so bland and lethargic — what a wasted opportunity.  Without much to say, the film merely exists without much else. It’s so simplistic.  I don’t know about you, but I want more out of my means of entertainment!

I left this movie wondering if we should all take a break from road trip movies for a while.  That’s not exactly the best endorsement for what Boundaries offers. 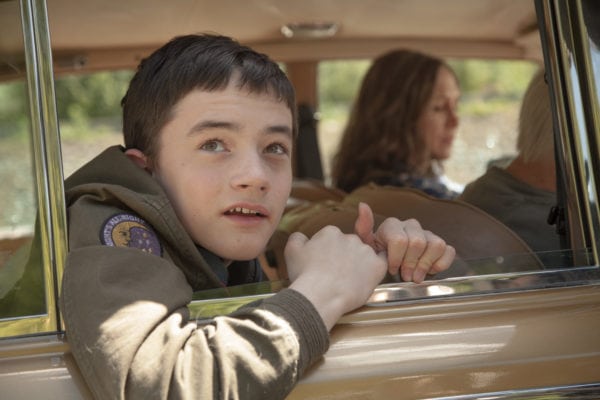 You might find some enjoyment in Boundaries if you’re looking for a film that won’t challenge you mentally, but it’s simply too similar to recommend as a must-see film.

I propose a moratorium on road trip movies for the foreseeable future, because it’s becoming abundantly clear that they really don’t have anything new to add to the medium; it’s just more of the same, and that “same” wasn’t ever incredibly entertaining from the start.

Thank you for reading! What are you thoughts on Boundaries? Comment down below!

[…] Bill and Ted are visited by Kelly (Kristen Schaal), the daughter of Rufus. Having traveled all the way from the future, she urges the duo to come […]

[…] from an epic runtime that will fill your quarantine time, an iconic musical score, and angry Henry Fonda. A […]

The dog is so breaking The Fourth Wall in that featured image. Ha ha.