All the World’s a Ring: 10 Years of ‘The Wrestler’ 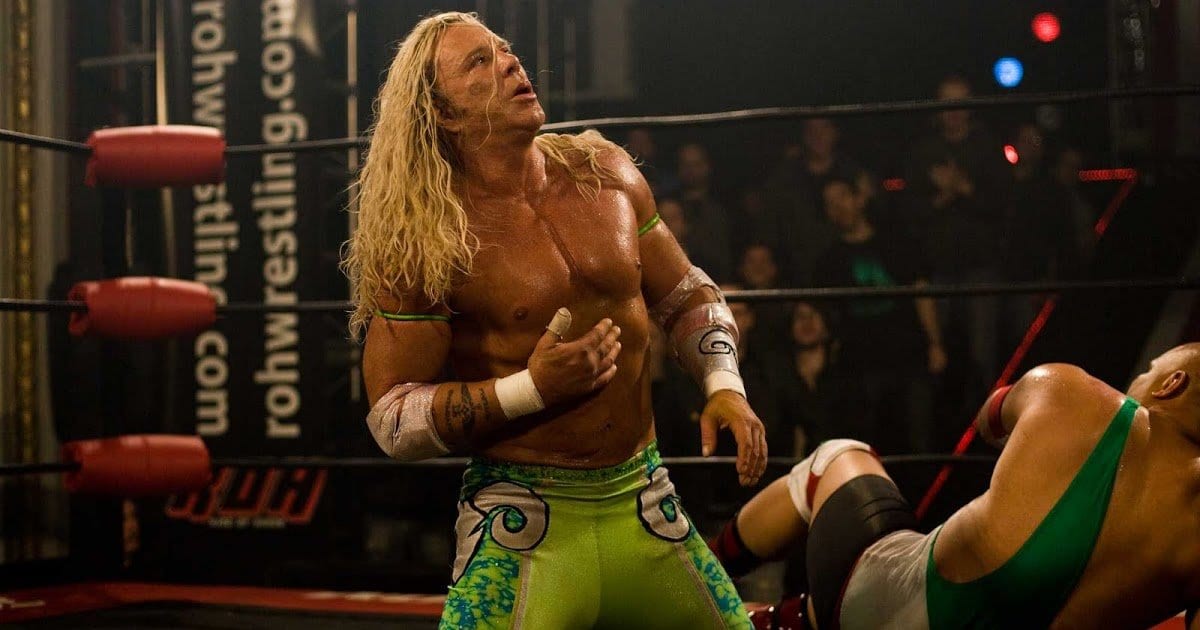 Darren Aronofsky is one of the great trickster gods of the modern cinema world. His modus operandi as a filmmaker is to shock, to provoke thought, to search the human psyche, to obliterate his audience’s expectations regarding human behavior. The director’s attempts at stylized, subversive storytelling have ranged from the sublime (the dizzying, sexually-charged psycho-ballet of Black Swan) to the ridiculous (the ham-fisted biblical drama of Noah) to, uh, whatever the hell mother! was. But his best, most insightful film also happens to be his simplest and most humanistic — 2008’s The Wrestler. It’s a dramatic twist that even he couldn’t have seen coming.

In honor of the 10th anniversary of the film’s release this week, let’s take a closer look at Aronofsky’s beautiful, heartbreaking opus. In particular, we’ll examine here the film’s exploration of human life as illusion.

“A true American — the people’s hero…”

Our first introduction to The Wrestler’s titular character, pro fighter Randy “The Ram” Robinson (Mickey Rourke), arrives via a colorful collage of posters and magazine covers heralding his meteoric rise to superstardom. The montage pays particular attention to the Ram’s legendary 1989 match against the Ayatollah — here represented by arena sound bytes of bellowing announcers and screaming spectators. It’s a simple but effective representation of a man at the top of not only his game, but the world.

“It ain’t about ability.”

But then, the cheers die down. We cut forward two decades to a Ram whose glory days are clearly far behind him. Once one of pro wrestling’s most famous figures, Randy now lives by himself in a beat-up trailer. He routinely finds himself locked out of his own home by his cantankerous landlord Lenny (Mark Margolis) on account of his inability to pay rent on time. His weekday grocery store job under catty manager Wayne (Todd Barry) barely earns him enough to make ends meet. Nevertheless, he remains doggedly focused on continuing his wrestling career. Appearances in small, sparsely-attended exhibition matches at local venues occupy much of his time.

Professional wrestling’s status as an intricately orchestrated spectacle has long been an open secret. We experience that reality firsthand during one early scene in which Randy prepares for a group exhibition match. He and his opponent Tommy Rotten (Tommy Farra) choreograph the various moves they’ll perform on one another during the match. Several of the other pairings do the same. Though they’ll be bitter enemies in the ring, Randy and Rotten display a pregame mood of playful cordiality. Randy compliments his adversary on his technique and even suggests they grab a beer together after the show. “It ain’t about ability,” the old sage explains. “The ones who drive the Cadillacs, the ones with the politics — they run the show.”

This brings us to one of the key motifs Aronofsky employs in The Wrestler: human existence as a series of elaborate illusions. Wrestling is the only thing Randy has in life. It consumes him to the point that it overtakes his entire identity. He knows better than anyone how. Hence, he works hard to sustain the illusion of himself as a great fighter. He engages in a strenuous workout routine. An absolute laundry list of steroids gets injected into his bloodstream. He even pays regular visits to his local hair and tanning salons.

For his fight with Rotten, Randy conceals a razor blade in his athletic tape and discreetly jabs it into his forehead to draw blood, lest anyone in the crowd assume lack of effort on his part. His wrestling bros — of whom he is the oldest by a longshot — contribute to the fantasy, providing zealous applause and side-hugs while half-heartedly declaring that his performances in the ring are “just like the old days.”

The “act” of wrestling spills over into nearly every other aspect of Randy’s life. He insists that everyone he meets in a formal setting refer to him as “Randy.” It visibly irks him whenever his doctor, his pharmacist, etc. call him by his given name, Robin Ramzinski. He regales Cassidy (Marisa Tomei), a dancer at Cheeques’ strip club with whom he maintains a casually affectionate relationship, with tales of the old days as a way of keeping his bygone prime alive. “Thanks for all the good news.”

Randy’s attachment to his persona explains why a sudden yet inevitable medical scare hits so close to home. After a grueling hardcore match involving (among other items) plate glass, mousetraps, silverware, a prosthetic leg and a staple gun, he collapses in the locker room and is rushed to the hospital. Upon coming to, he learns that he had a massive heart attack and subsequently underwent bypass surgery. As a result, he can no longer afford to work as a pro wrestler. “Thanks for all the good news,” he says to his doctor with an ironic, heavy-hearted chuckle.

In Randy’s universe, winding up alone tops the list of worst things that can possibly happen to a person. As he settles back into his trailer and experiences the drudgeries of caring for himself by himself, we see the truth of his situation start to sink in. His inability to face the reality of his life forces him to find new roles to play. As the Bard himself put it: “All the world’s a stage / And all the men and women merely players / Each has their exits and their entrances / And one man in his time plays many parts.”

Randy also assumes a much more awkward, challenging role — that of the caring, contrite father. At Cassidy’s encouragement, he makes an effort to reconnect with his estranged daughter Stephanie (Evan Rachel Wood). The task almost instantly hits a snag due to the fact that the two barely know each other. Stephanie points out that Randy never made it to a single one of her birthdays growing up and interprets his reconciliation attempt as a parasitic act of desperation (which, to be fair, is partly true).

Randy tries again, this time bringing her a gift and taking her on a trip to the boardwalk they used to frequent when she was younger. At this point, his “father” role culminates in the all-important “Oscar moment” — a weepy confession in which he admits to Stephanie that he screwed up. “You never did anything wrong,” he tells her. “I used to try to forget about you. I used to try to pretend that you didn’t exist, but I can’t. You’re my girl. You’re my little girl. And now…I’m alone. And I deserve to be all alone. I just don’t want you to hate me.” 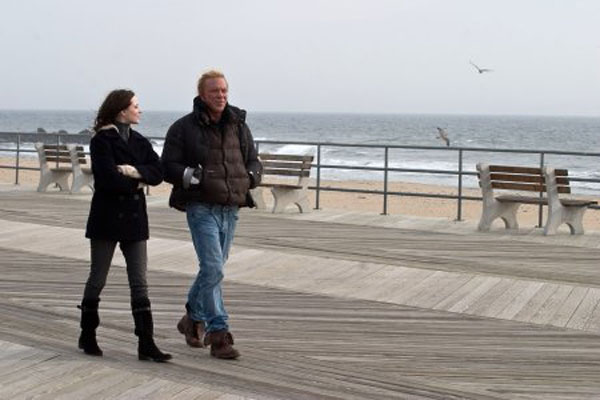 The Club and The Real World

Like Randy, Cassidy also plays a role as part of her daily life. As a stripper at Cheeques, she gets paid to make men’s sexual fantasies into realities. Outside, in the real world, she resumes her natural state as Pam, a single mom struggling to support her young son. She excels at playing her role, too. The chemistry between her and Randy indeed seems very real in the context of thumping beats and gyrating bodies. It feels legitimate enough, in fact, that Randy tries on numerous occasions to act on his feelings. But Pam rejects his advances, ultimately telling him that “the club and the real world don’t mix.” Here we witness one of the chief similarities between Robin/Randy and Pam/Cassidy. At the end of the day, we see two world-weary souls forced to uphold their own personal facades just to get by.

Thank you for reading! What are your thoughts on the work of The Wrestler? Comment down below!

A personal favorite of mine. Soooo wanted Mickey to get the Oscar that year!

He deserved it for sure.