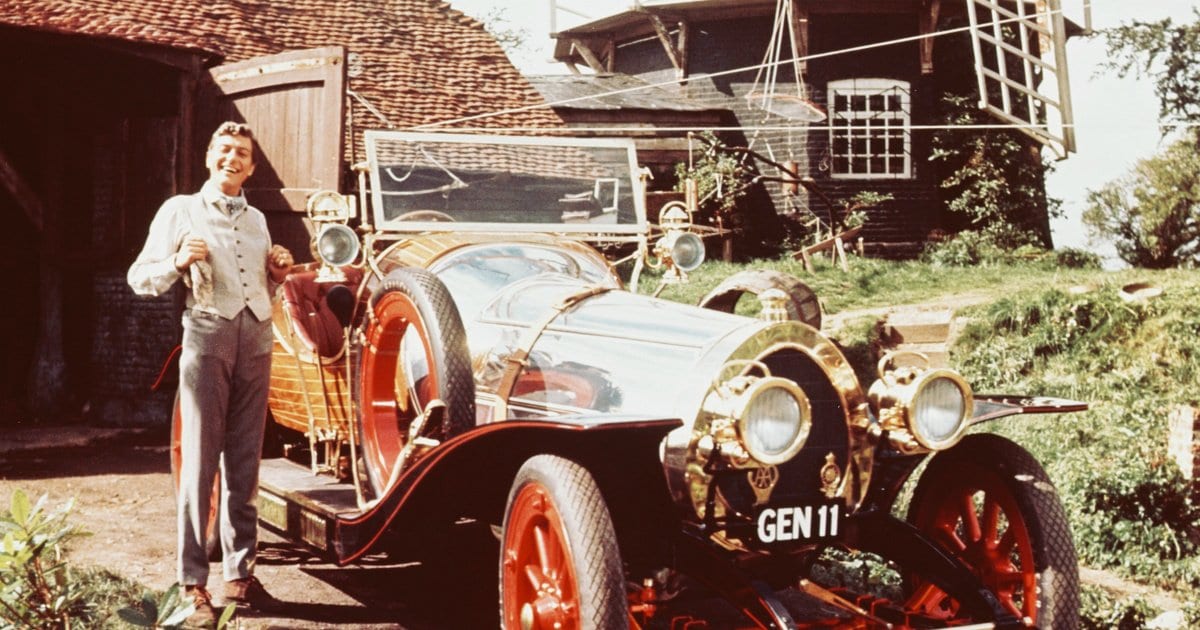 Call me a grinch, but I have to say it: After 50 years, Chitty Chitty Bang Bang is not as great as some might have you believe.

The story revolves around an inventor, his two children, and an old racing car that he repairs. The story starts when the man meets a young woman, and as they get to know each other the inventor tells his children a story, in which the titular car is magical, and they need to battle a wicked baron who wants to steal the car for himself.

The plot is very thin. The fantasy story is not part of the film’s world at all, but a story Caractacus Potts (Dick Van Dyke) tells his children. The most fantastical thing about the real world is that the love interest goes by the highly improbable name Truly Scrumptious (Sally Ann Howes). The naming of characters in a humorously appropriate way is something of a British tradition (just read a few Dickens novels) but this was truly unfunny.  Author Roald Dahl wrote the script in conjunction with director Ken Hughes, based on the novel by Ian Fleming. Another theory is that Dahl created the character name as an homage to the strange names of Fleming’s Bond girls. (Pussy Galore, anyone?) 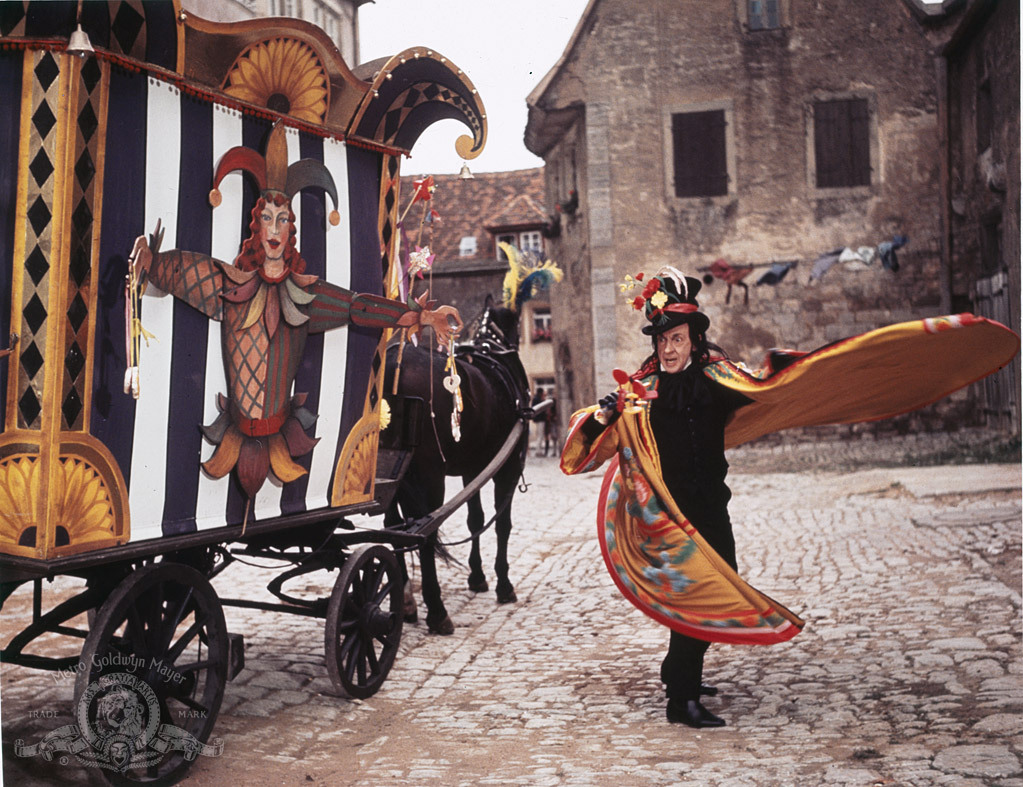 Why did they make the main part of the plot merely a story Potts tells his children? This, in my opinion, detracts from the film immediately. The audience knows none of this is happening from the start, and it is hard to engage with a story that has no potential consequences. The fantasy section of the story descends quickly to the level of pantomime-style overacting and caricature. The obvious German roots of the fictitious kingdom of ‘Vulgaria’ (and vague hints of Nazism) are particularly cringe-worthy. On a better note, the cast performs well, and there are some nice song and dance routines. Small children would enjoy the slapstick humor, and the story is wrapped up with minimal and comedic violence.

Caractacus Potts (a play on crackpot, we can assume), is a benevolent though somewhat careless father, who invents Rube Goldberg-style devices that don’t sell. Lionel Jeffries as the grandfather is weirdly and wonderfully eccentric, and I suspect that the resemblance of ‘grandpa’s hut’ to an outdoor loo is a little joke for the adults. I did enjoy the performance of James Robertson Justice as Lord Scrumptious. He is a favourite of mine from Doctor in the House, and he does the bad-tempered old curmudgeon role beautifully.

Benny Hill as the toymaker was, curiously, one of the few characters who was played straight. Robert Helpmann as the child catcher was delightfully creepy in a hammy way. You might recognize Baron Bomburst (Gert Frobe) from Goldfinger. He put in quite the pantomime performance and, unfortunately, was one of the weaker actors in this film. Howes, too, seemed to be present only to be pretty and be a love interest, and so the character was rather bland. Heather Ripley and Adrian Hall as the children were cute, but that is all.

Apart from the title song, most of the songs are rather forgettable. You don’t find yourself remembering them later as you do with other musicals. The composers Richard and Robert Sherman composed the music for classics such as Mary Poppins and The Jungle Book. Their work here is serviceable, but it does not rise to the heights they attain in other films.

The dance routines are good in that it includes some very complex routines that are very appealing from a visual perspective, such as the ‘Toot Sweets’ dance in the sweets factory, which apparently took three weeks to film, and involved 38 dancers, 40 singers, 85 musicians and 100 dogs! The best song and dance number, however, occurs in the castle, where Truly is pretending to be a windup doll and Caractacus a puppet. Both actors were excellent, and it is an especially good showcase for Dick Van Dyke’s talents as a performer. You can really believe he’s being pulled around with strings.

Director Ken Hughes has created a visually appealing film. The outdoor scenes are mostly on location, including the castle of Neuschwanstein in Germany and other locations in England and France. The scenery is beautiful, and the film is vibrantly colourful.  Hughes is better known for action movies, and Van Dyke said later he struggled to work with him. He seemed especially out of his comfort zone directing children, who apparently received more guidance from Howes than from him. Hughes was apparently dissatisfied with the film. 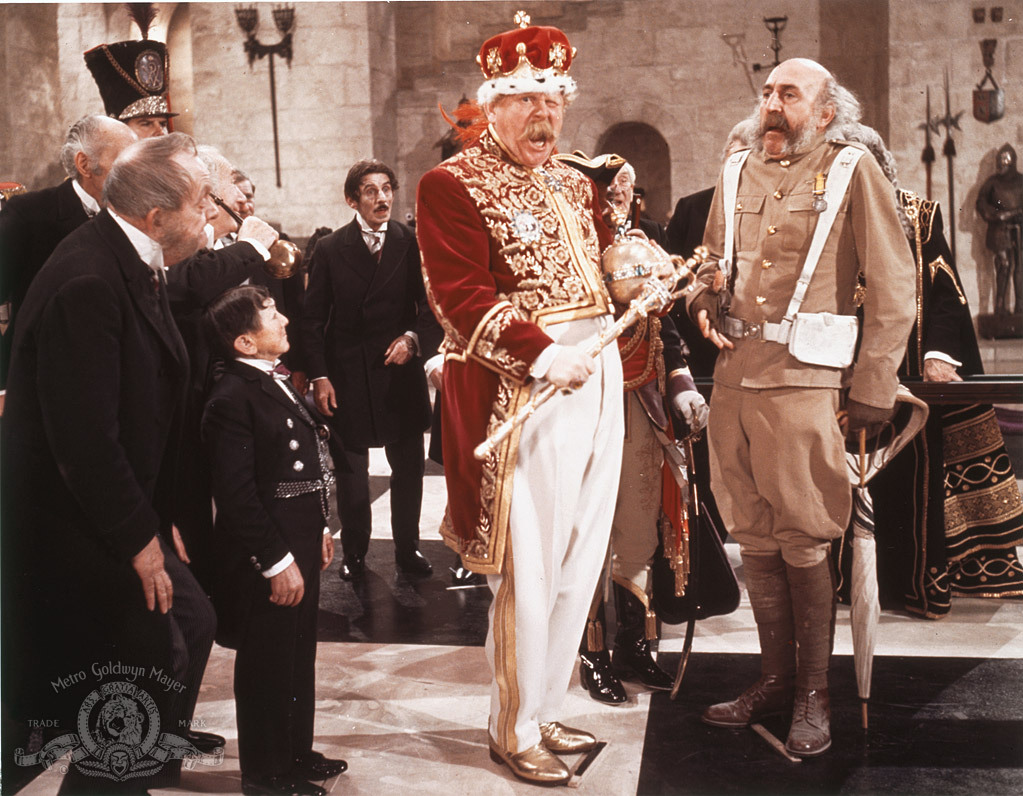 Chitty Chitty Bang Bang is fine for young children, assuming the run time of well over two hours holds their attention. But the best children’s stories hold up under adult scrutiny, and this film does not. It is merely passable, and certainly no Mary Poppins.

Thank you for reading! What are you thoughts on Chitty Chitty Bang Bang? Comment down below!

It’s a classic. My favourite film as a child that I watch every year at Christmas when it’s on TV.
Hushabye Mountain is a lame song though.

I was never a big fan of this film even as a child. It wasn’t one of those films that freaked me out or anything, it just didn’t do much of anything for me. Even back then I would watch the Childcatcher’s ice cream man act and think “If you fall for a trap like that, you deserve everything you get.”

I’m gonna disagree with you because even though I will admit this does have problems compared to other children’s classics, I still find this classic enough to be classic. I don’t find the songs forgettable; I’m always singing multiple songs from this film to myself and I think the Sherman Brothers did a great job with the songs here. I love the characters and the acting.

I was obsessed with Chitty Chitty Bang Bang as a child – I used to watch it all the time. I haven’t, however, watched it in at least over 5 years so I think it’d be quite a different experience for me now. Even if it turns out to not be such a great film, I think it’ll still hold a lot of value for me in its nostalgia.

If Chitty Chitty Bang Bang is not a childrens’ classic then I’m a koala bear.