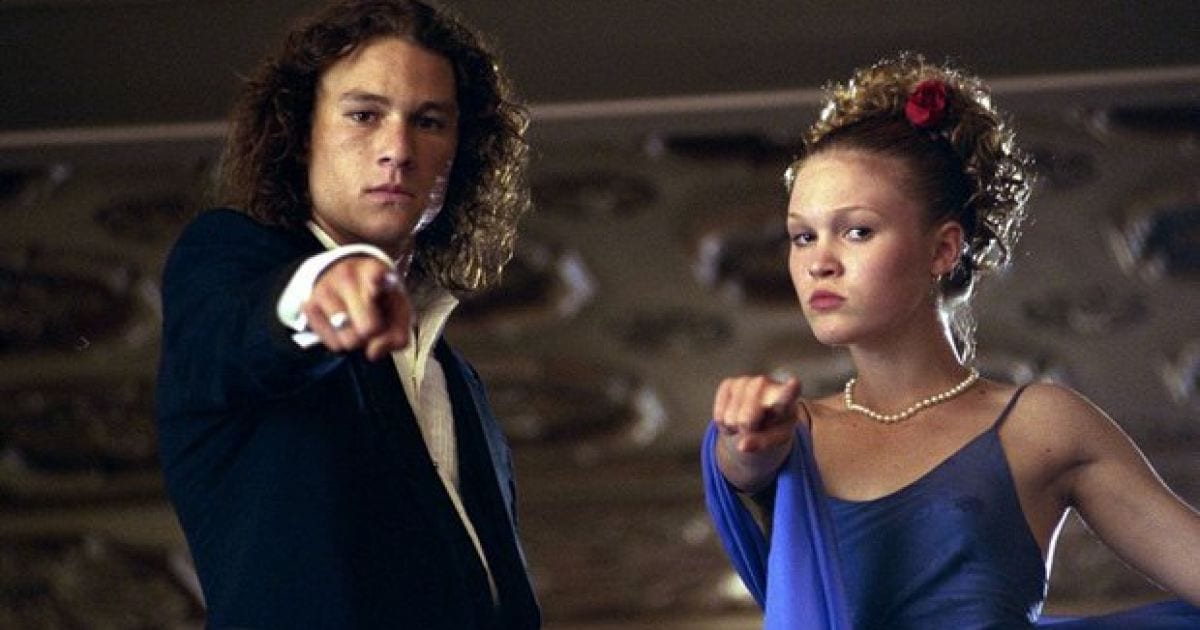 The 90’s were host to all these great teen movies, like Cruel Intentions, Can’t Hardly Wait and of course, 10 Things I Hate About You. The script is funny and the cast really pull it together to make the entire movie work. It makes sense since that most of them went on to become big names in the industry. I always appreciate modern adaptations of Shakespeare, and look forward to how they will spin its context. As a lit major, it is an added bonus for me when these adaptations show how contemporary Shakespeare’s plays are, and the longevity it creates for works of the Bard. 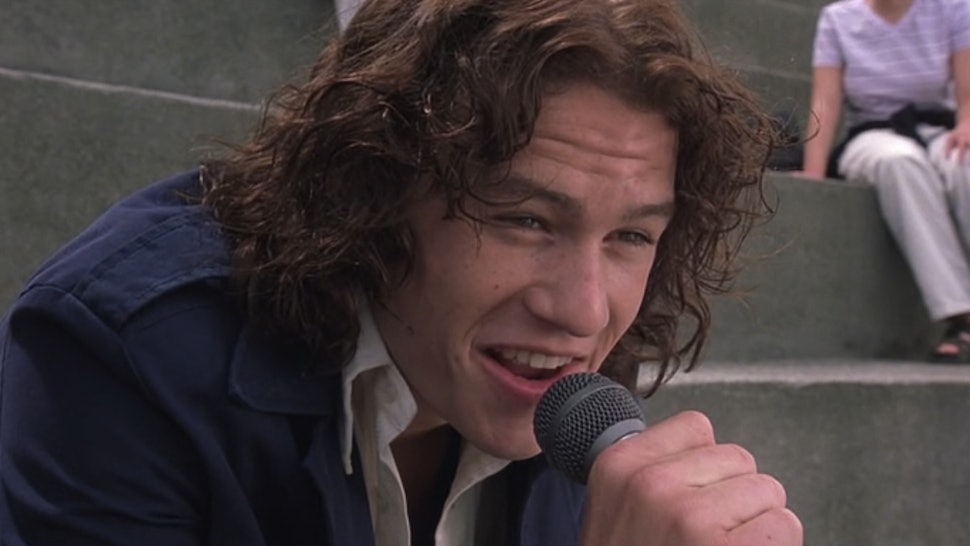 When re-watching the movie for this post, I noticed how prevalent grand romantic gestures are in this movie. It probably contributed to all these prom-proposals we see today. I like that it is a mutual thing between the two leads, where Patrick (Heath Ledger) starts it off with the very public performance of Frankie Valli’s “Can’t Take My Eyes Off Of You”, and Kat (Julia Stiles) ends it with her public reading of her sonnet which is titled “10 Things I Hate About You”.

These are striking moments, because Patrick is willing to lose his tough guy persona and Kat is willing to stake her pride — something she has been holding on so tightly to the entire movie. I was taken aback by the tears Stiles had flowing down her face, and I was not surprised to learn that the crying was unscripted. It makes sense after I discovered Ledger and Stiles were dating after the movie. It feels like Stiles was speaking from a very personal space, and leveraging emotionally on a connection she shared with Ledger — it seems too real to be acting.

How adorable was a young Joseph Gordon-Levitt? When he says, “I pine, I burn, I perish” (which are actual lines from Shakespeare), instead of the lines coming off as corny mush, they feel super sweet and heartfelt. The French speaking scene between Gordon-Levitt (Cameron) and Larisa Oleynik (Bianca) is so entertaining and a fun kind of flirty. It’s so cute how flustered he gets flipping through the pages because he can’t understand, though in real life Gordon-Levitt can speak fluent French.

David Krumholtz (Michael) has for some reason been stuck playing nerd/smart guy his entire career. Here he plays a nerd, in the TV show Numbers he is some math probability genius and recently, when I was watching the TV show Mom, he makes an appearance as a Psychology Professor. Give the poor man some other role to play! He is, however, very good at what he has been typecast to do. The bromance that develops between his character and Gordon-Levitt’s is natural and supportive. Michael helps the new kid get the girl despite not knowing him very long, at no benefit to himself. Now that’s what I call friendship. 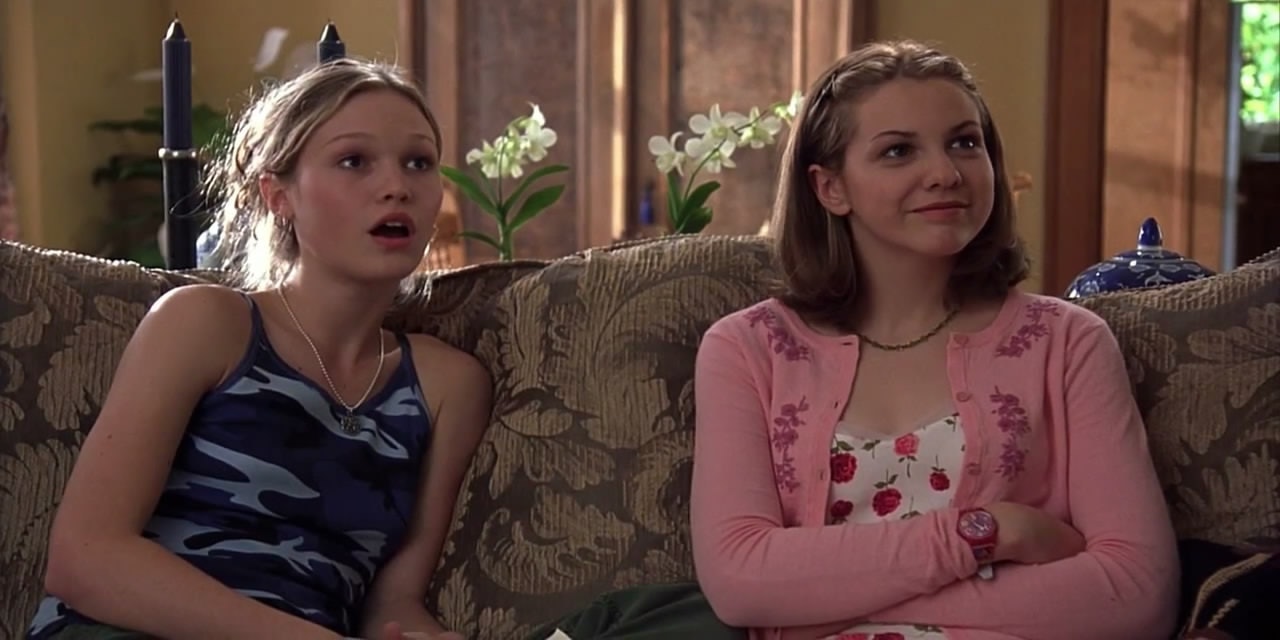 On the surface the relationship between Kat and Bianca might appear combative, since Bianca feels her sister gets in the way of what she wants. Kat’s anti-social behavior has a reason, where she slept with Joey because it was the norm to have sex — she did it because that’s what everyone else was doing. In reality, she was far from ready. In her own way, she is protecting her sister yet also wanting her to discover on her own terms what Joey is really like.

Even though going to the prom is contrary to what Kat wants to do, she goes so her sister can experience what prom is like. I like how at the end, they make amends and we end the movie with the two feeling settled in their relationship.

I must say that I wasn’t very fond of Gabrielle Union‘s character as the bitchy best friend. It seems she is just friends with Bianca for her popularity, swinging in to be Joey’s date for no reason except his popularity — I guess maybe because he is hot (he isn’t quite my type). Her character is the most underdeveloped of the lot, which is a shame since all the other supporting characters get a better story.

The Role of the Father 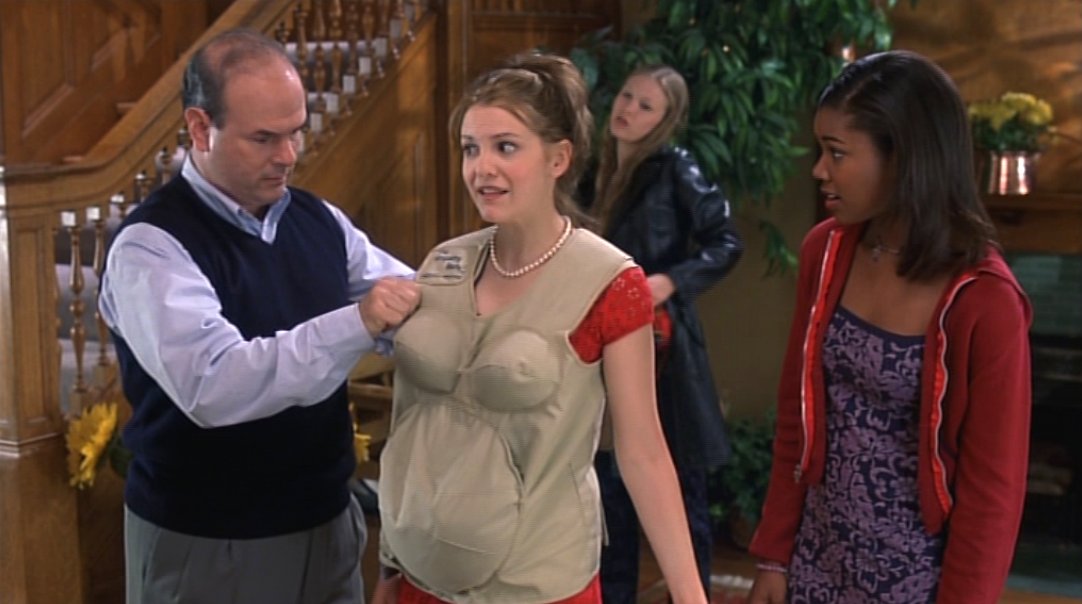 I feel this is one of the rare teen movies with the father role so fleshed out (of course there’s the more recent Eight Grade which does this quite well). There is comedy to it, yet at the heart is the realization of the difficulty a father faces when raising girls/women. The father here is worried that a night of folly could lead to an unwanted pregnancy, especially since he sees the outcome of this in his job as a gynecologist.

There is also the awareness that protecting and shielding is just not sustainable. Eventually they grow up, leave home to go to college, have romantic relationships — mistakes are inevitable and sometimes necessary. In the end he lets go when he supports Kat’s desire to go to Sarah Lawrence College, and he is less of a guard dog with Bianca as she gets to date Cameron.

So you see, 10 Things I Hate About You has everything — romance, friendship, sisterhood, family. It is such a gem of a movie, even though it gave me unrealistic expectations of high school. I never found my own Patrick Verona who would sing and dance for me in the bleachers, but I did find someone who would go searching to buy me bubble gum just because I wanted it — it is one of the things I love about him.

Thank you for reading! What are your thoughts on 10 Things I Hate About You? Comment down below!

Lance Henriksen Rages Against the Dying of the Light in Viggo Mortensen's 'Falling' | MovieBabble February 14, 2021 - 2:13 pm

[…] let’s be honest, it’s not the prospect of death that makes old age terrifying, it’s decay, the dying of the light. It’s losing your vitality, both […]

Excuse me while I go ugly cry for a second.

I got a box of tissues for you

Ah, the late great Heath Ledger, such a shame…

Ikr :( He had reached his peak professionally. Taking on that persona had been too much.

Just wait until the posts about “Dope” turning 20 years old in 2035, and how it makes some young person feel old…

I feel so out with the times. No idea what movie this was and had to google it.

Just as I had to Google yours. I’m from the generation before yours, where Dirty Dancing was the touchstone teenage movie. I only know Dope because I go to film festivals.

Dirty Dancing! It may not have been a teenage movie to me, but damn it is classic. I have watched it more times than I can count.

Exactly. It’s 12 years before “10 Things I Hate About You”. I was trying to give her a sense of what I felt like when I read her post.

Or you, as the case may be.

Can’t hardly wait was one of my favorites!

Mine too! Ethan Embry was such a crush of mine growing up. I like the whole premise of fate vs choice that is layered into the movie. Teen movies nowadays just don’t do it for me. There are exceptions of course, like The Edge of Seventeen and Eight Grade.