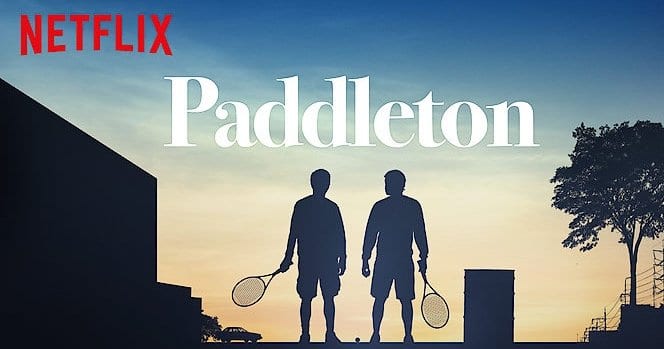 I grew up on Everybody Loves Raymond, which really cements my view of Ray Romano being one of the funniest men on television. He comes across as real and authentic, which heightens the credibility of any role he plays. While I enjoy Mark Duplass as an actor and appreciate the movies he makes, I always feel that he is aware of his limits as an actor, which is why his co-stars get the meatier roles. Paddleton benefits from the chemistry and camaraderie the two share, but it shines because of Romano, who has really shown that he has the acting chops to pull off more dramatic roles.

Michael (Mark Duplass) and Andy (Ray Romano) are neighbors and best friends. They spend their days caught in a routine of paddleton (a squash-type game they invented), pizza dinners, jigsaw puzzles as well as their favorite Kung-Fu movie Death Punch. When Michael learns he has cancer and doesn’t have long to live, he calls on Andy to help him end his life on his own terms. While Andy agrees, as the moment to do so gets closer, he faces struggles of his own — of wanting to help Michael yet aware that when Michael dies, he will truly be alone.

If you have watched any of Duplass’ movies, it might feel that they are closer to real life than fictional. That is because improvisation plays a huge part in some of these type of movies. It is no exception for Paddleton, where the script was specifically underwritten in the hopes of obtaining more naturalistic types of dialogue. Actors go into the scene with a broad idea of what it is supposed to achieve, and then the improvisation takes place. Duplass is familiar with this technique since it has gone into a lot of his films, but the idea of improv was daunting for Romano, since this is the first time he would be doing it on such a large scale. It appears to have paid off though, considering how well-received Paddleton has been since its premiere at Sundance and its release on Netflix.

Female friendships in film have always seemed to develop a deeper sense of intimacy than male friendships do. So while there are solid presentations of male friendships in movies, like Will Smith and Martin Lawrence in Bad Boys and the gang in The Fast and Furious franchise, it is mostly present in these macho/masculine type of spaces. Paddleton from the get-go establishes a different type of space, which feels more intimate and vulnerable — a friend holding another friend’s hand through a terminal illness.

They spend nearly every waking minute together, almost comparable to that of a married couple. The pair get mistaken for a gay couple a few times in the film, which speaks to how much love there is between them. Sometimes all they need to do is look at each other, and I get the intention from their gazes alone. The banter is wonderful, the comedy mixed in with the moments of sadness. I found myself laughing quite frequently throughout the film, only to immediately sober up when reminded of the fact that Michael is dying. This friendship is the center of the movie, and I believe wholeheartedly in it.

Death and the Afterlife

Image via The Diamondback

This movie wasn’t very didactic with its themes, which is something I liked. The discussion of the afterlife comes up fairly organically, like when hotel owner Nancy (Dendrie Taylor) mentions her husband’s presence but then we find out that he has passed on. It seems that despite his passing, she believes he still exists and is with her. Michael and Andy never quite reach a consensus if Michael should seek Andy out after his death. It makes sense considering that his return might be comforting, but at the same time, it really isn’t him in his full, tangible form anymore.

As for the movie they keep watching — Death Punch — it may be a bit on the nose in terms of symbolism, and emphasized way too much such that it takes away a little from the effectiveness of the reference, however, its significance must not be overlooked. The movie is about the relationship between the master and his pupil. The master has mastered the move called ‘death punch’ and shows off his skill to the student, punching a nearby well of water — causing it to explode. Seeing his skill, the student sets out to master the death punch as well. However, he ends up delivering the death punch accidentally to his master, bringing about his death. Obviously this is a reference to Andy and Michael. Andy is in a way there to help Michael death punch himself and to be with him on his journey.

After all, like Andy says, Kung Fu is not about the fighting, but about what you learn about yourself in your journey through Kung Fu. Andy discovers that he needs to be strong for his friend, to tap on a strength deep within himself, even though he may be struggling or having issues. He moves from denial to acceptance, and from acceptance to heartbreak.

There is also the discussion of assisted suicide, and the ethical arguments at play. Michael wants to die on his own terms, before the illness turns him into a shell of a man. But the difficulty is getting the medicine, not to mention the steps involved when ingesting it, makes it clear that a person’s decision to take his own life because of a terminal illness is not really very acceptable. It is contrary to our societal training, which is to fight for life no matter the challenges that await. It makes us wonder if we would make the same decision Michael makes, or how far we would go to help a friend or family member take his own life.

While I enjoyed the movie, I felt it could use a bit more dynamism. There a fair bit of interior scenes where Michael and Andy just go about their dinner routine, where nothing is said or if they do speak to each other it feels unimportant. I get that their lives are monotonous and dull, and all they have is each other, but the film could have had more balance with regard to the static shots against the more dynamic scenes. For example, the scenes where they play paddleton and embark on their road trip adds a bit of movement and color to the film. I mean, this film is as much about living as it is about death, so maybe a balance would have created a stronger product.

There are some scenes that feel unnecessary, like the reenactment of Death Punch by Andy and Michael in the bar. Once again, I understand that it is meant to show their connection and love for the movie. However, the scene wasn’t funny and felt like something that should have been snipped. The movie is definitely emotionally affecting, especially the last 15 minutes or so. The thing is, you think you are ready for it, since the whole movie has been building up to this moment, but when it happens you find yourself untethered — at peace with Michael’s decision yet shattered that this is where we end up.

All in all, it is a film that the whole family can sit down to watch. As with any good film, it will lead you to reevaluate your life and your relationships. Let’s hope there’s peace at the end of it for all of us.

Thank you for reading! What are your thoughts on Paddleton? Comment down below!