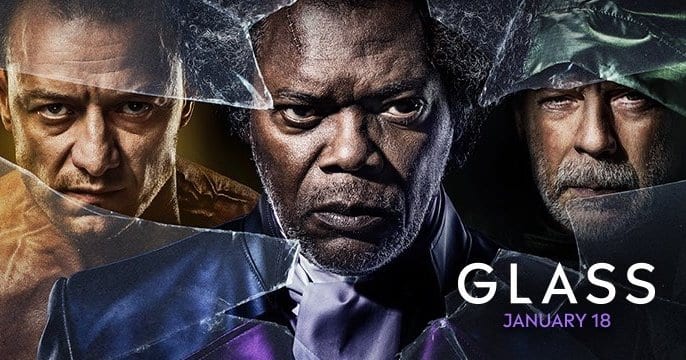 It’s been quite the winding road to get to this point, hasn’t it? M. Night Shyamalan returns once again to finish arguably one of the most ambitious and fascinating trilogies in Hollywood with Glass, the follow-up to the surprise smash-hit Split and the wonderful Unbreakable. But after the success of Split, Glass was saddled with endless amounts of hype and anticipation. Many were looking to it as the supposed coronation of M. Night as being unequivocally “back” from Director Hell. That amount of anticipation was for a movie we did not end up getting, however, as Glass isn’t what you might have been expecting, and I appreciate it even more for taking a circuitous route.

Called “The Overseer” by local Philadelphians, David Dunn (Willis) is out searching for the terror now known as “The Horde” (McAvoy) after word broke that the menace kidnapped three girls and killed two, leaving only Casey Cooke (Joy) alive.

With the help of his son Joseph (Clark), Dunn tracks down The Horde, but their battle is quickly disrupted by local law enforcement led by Dr. Ellie Staple (Paulson), a psychologist that wishes to study these two specimens. Quickly, Ellie puts these two into a psychiatric hospital with three days to study them.

Upon arriving at the hospital, The Horde and David learn that they have another resident in their ward: none other than Elijah Glass, David’s former enemy and terror upon the local area. Little do they both know that Elijah — or Mr. Glass if going by his villain persona — has a few tricks up his sleeve.

What Do We Make of M. Night?

M. Night Shyamalan is an incredibly intelligent man. Just listen to one interview with Shyamalan and you’ll quickly see that he has a lot going on in that mind of his. He’s what I would call an idea man: though he often excels with conceptual elements of filmmaking, he sometimes struggles to put pen to paper, getting distracted by no one other than himself.

For the most part, when Shyamalan struggles, it’s because he’s attempting to cram all of what he thinks into a single movie. He’s one of those talents that you constantly have to reel in, because if you don’t do so, he might just get lost in his those thoughts. But when his mind becomes clear, greatness ensues. Though everyone falls back on The Six Sense, my personal favorite Shyamalan film is unquestionably Unbreakable — which obviously made me far more excited to see Glass.

Even in his failures, Shyamalan remains fascinating. You can always see the intent, the ideas that would have made for an awesome feature if a few items were altered. I’ve always surmised that this is why we’ve given him so many chances.

I have so much appreciation for a creator that throws caution to the wind. Shyamalan has even gone as far as personally financing his last few films, starting with The Visit where he was forced to get a second mortgage on his home just to make it. I have nothing but respect for him as a voice in this industry.

The Gang is Back Together

Throughout Glass, I found myself consistently admiring the actors’ choices. Bruce Willis was solid for what he was given which, if you ask me, is a small miracle considering he’s been overly sleepy and lethargic in just about every role he’s taken the last few years. If you disregard Rian Johnson’s Looper, this sad streak dates back even further. But the movie — and myself, quite frankly — is most fascinated with McAvoy’s The Horde and Jackson’s Mr. Glass. (His character’s name is the title of the film, after all.)

I love everything about McAvoy as The Horde. It’s the most actory amount of acting to every act, and he’s clearly loving every second of it. Like the person directing him, McAvoy is going for it 100%. It takes serious confidence and guts, similar to someone on stage performing in their own one-person play. He’s vulnerable at all times as a performer, and that’s precisely why this gonzo turn works so well. I love how Shyamalan lingers on McAvoy, using wide shots and long takes which shows The Horde’s impulsive nature in some of its personalities. (Watching the personality known as Hedwig dance into a corridor is one of the funnier things I’ll see in a movie this year.)

Glass is also a bit of a return to form for Samuel L. Jackson, who has been largely coasting off of a heightened version of Jules from Pulp Fiction in recent years, only with far worse screenplays and dialogue. Jackson also takes a few chances in his performance, and they largely work exceedingly well in combination with the story’s structure. We didn’t see much of the machinations behind his character in Unbreakable given how its story handles itself, but with Glass with get more of a sense of how Elijah Price’s mind works, and how he’s far more intelligent than you even thought before.

I’ve always thought that Shyamalan was at his best when he worked with a smaller budget. It acts as a way to “reel in” the director without actually interfering on set. He starts to lose himself when that budget increases, as if the amount of money going into the movie is in direct correlation with his level of pride and feeling of importance. With Glass, there’s a feeling of him teetering on the edge between poignant thought and over-indulgent remarks. For many, Glass might feel like a self-important movie that thinks it is too smart for its own good. Personally, riding that line worked well as a comment on the genre, given that it fuels most of the film’s expectations. (Not to mention that many of the individuals spouting these claims have some sort of neurological difference or odd fixation.)

Shyamalan certainly strained himself to make his point heard, but in also taking into account where this movie leads us, it’s for a worthy cause.

Though I must admit that this “worthy cause” is going to ring entirely false to many viewers, as the third act of Glass is unquestionably divisive. There’s an odd structure to it that has already led to some backlash, and I certainly see the case for such criticism. However, if you take the entire trilogy into account, there’s more than meets the eye with this film. I found plenty of bits to dissect, which is rather rare when movies like A Dog’s Way Home get a wide release. Shyamalan is building so much mythology in Glass along with handling so many characters and thoughts that it would be unwise to not mention its messiness. Glass is at its best when it focuses on McAvoy, Jackson, and Willis’ characters and their interactions with Sarah Paulson. Characters on the periphery such as Spencer Treat Clark’s Joseph and Anya Taylor-Joy’s Casey are more or less forgotten for long stretches, only to feel quite contrived once they come back into the fold. Shyamalan has so much that he wants to get out of his head that Glass becomes a bit choppy when things begin to escalate. Some motivations are lacking and some story points aren’t as tightly written as you would have hoped.

It also doesn’t help that Glass is over-directed in some sequences. Shyamalan has a bad habit of attempting fancy camera tricks that have limited impacted on the actual scene. It’s technique for the sake of technique that has no discernible purpose. When Glass takes a moment to relax, it’s absolutely riveting. I get the sense that the movie is overly excited to tell what it has to tell, and I can’t entirely blame it considering how absorbing its material is when it gets it right. There’s a lot of hate out in the air for this movie — and I can absolutely understand it in part — but I see Glass differently. With the help of a truly insane performance from James McAvoy and a bit of a return to form for Samuel L. Jackson, Glass has a lot to chew on…just not in the way you thought you were getting. Shyamalan could have used a few more no’s thrown his way from other members of the development team, but there’s still so much style and fascination to behold.

In 10 years, I think we’re all going to look back at Glass and start to appreciate it more for what it is, and not bash it for what we thought we might get. Considering how Unbreakable‘s reception has improved with time, this could be the universe’s way of creating the most fitting end possible for this trilogy.

Thank you for reading! What are your thoughts on Glass? Comment down below!

[…] expects from the romances of her friends and neighbors. But that is the joy of Emma and watching Taylor-Joy in the role was nothing short of […]

I haven’t seen “Glass” yet, but I’m very much looking forward to it as I’m a big fan of “Unbreakable” and “Split” (which I reviewed on my own website). It sounds very interesting. I think that Samuel Jackson is often wasted but when he’s in the right role, he’s excellent.

Samuel L. is great here! Sort of a return to form for him 😁

I looked at the trailer first it looked so deliciously twisted I’ll pass on reviews this time no filters got to see it.

I definitely would go see it! Although I would certainly warn you that you should definitely see Unbreakable and Split if you haven’t already! Glass ties heavily into them!

It might be a good idea to go back and see it. This movie pulls some deep cuts from both Unbreakable and Split. Though I would say out of the two that Unbreakable is the more important film to see, it still pulls from both a considerable amount

“In 10 years, I think we’re all going to look back at Glass and start to appreciate it more for what it is, and not bash it for what we thought we might get.” This sentence gives me hope (hadn’t been sure if I’d even see it ’til now). So much is marketed to expectations. I miss being surprised by a story.

“Glass has a lot to chew on…just not in the way you thought you were getting.”

That’s one way to put it. The big Shyamalan “twist” was certainly not what I expected. Another great review. I’m still chewing on this one, for sure.

Thank you so much! I just think that this movie should not be disregarded as it is by most people. Definitely something to chew on!