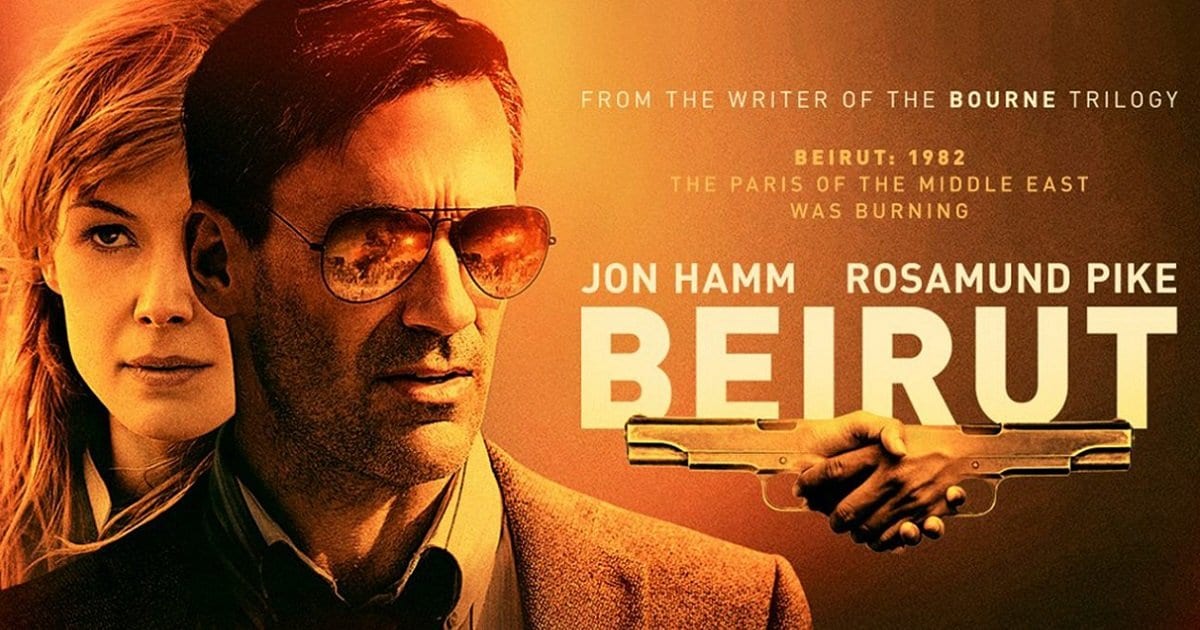 On January 11th of this year, Bleecker Street released its trailer for Beirut, a fictional story set during the Lebanese Civil War in the early 1980’s.  From the mind behind the Bourne franchise and Michael Clayton, executives at Bleecker Street felt that Beirut could become a thriller that turned into a surprise hit.  However, perceived insensitivity to the Middle East and the Lebanese caused a serious backlash, leading many to give up on the film before it ever hit theaters.

After losing his wife to tragedy as a Lebanese ambassador ten years prior, Mason Skiles (Hamm) has given up his role as a negotiator to foreign lands in hopes of escaping his demons.  Ten years later, Skiles is now a heavy drinker, working as a labor dispute negotiator in the United States.

However, Skiles learns that he is requested by name to act as the negotiator in a specific discussion between foreign diplomats and a rogue terrorist group…and the main sticking point in the negotiation may be tied to his past.

Tony Gilroy initially wrote the script for Beirut back in 1991.  However, not too many individuals have praised Gilroy for finally finishing his story.

After the Beirut trailer dropped on YouTube, the hashtag #BoycottBeirutMovie started trending on Twitter.  From the promotional material, it appeared that the movie was furthering Middle Eastern stereotypes that has been present in Hollywood for quite some time — that every Middle Eastern individual is a terrorist.  It didn’t help that the trailer included that typical sepia tone and an unidentifiable Middle Eastern yodel.  Others questioned the authenticity of the Lebanese accents as well, noting their blatant inaccuracies.  The landscape didn’t look like Beirut either, and that’s because the project filmed in Morocco, which is almost 4,000 miles away from the titular location.

Habib Battah, a journalism lecturer at the American University of Beirut and the founder of BeirutReport.com, went on to explain his issues with the film:

“This is what happens in almost every Hollywood movie about the Middle East.  The Americans and the white folks are the victims. They’re being bombed. They’re being attacked. The Arabs, usually, for the most part, are the aggressors. They’re doing the bombing.”

Naturally, Tony Gilroy fought back on behalf of his project, noting that there’s nothing “anti-Arab or cliché” about how they approached the film and that Lebanon was too polished and refined these days after years of rebuilding to film there.  Either way, this wasn’t exactly the press that Bleecker Street was hoping to receive.

Jon Hamm is His Usual, Charismatic Self as Mason Skiles

He’s had quite the prolific career as an actor, but most people know Jon Hamm as Don Draper from Mad Men as a debonair, troubled individual with enough charisma to pass around to the other actors onscreen.  His character in Beirut uses some of the same traits to his benefit, instantly becoming a likable, grizzled veteran in his field and is clearly one of the smartest — if not the smartest — person in the room.  As a negotiator, Hamm blows away the competition within the confines of each scene.  He sees through lies, exposing logical inconsistencies in an instant to swing often contentious disputes in his favor.  It’s quite a pleasure to see Hamm carefully digest every word spoken in his direction.  He uses everything to his advantage, making his involvement in the scenario very meaningful.

Beirut plays out with a workmanlike attitude, telling the audience exactly what it needs to know about Hamm’s character’s backstory to get attached, allowing Hamm to then work his magic as an attractive, aging lead to pull the audience in completely.  Within those constraints, Hamm provides enough charm and weight in the lead role to make Beirut a worthwhile viewing experience.

As is the case with any thriller, Beirut has to juggle many different elements and mix them all to make a delicious stew — or at least one that’s edible.  Thrillers in the vein of Beirut are some of the more difficult films to direct.  Every element has to work in tandem to create a twisting, revealing story that waits until just the right moment to show its cards in a game of poker with the audience.

In that regard, director Brad Anderson admirably guides Beirut through its 110-minute runtime.  His direction puts trust in the audience to stay committed to the story.  Unlike many of Tony Gilroy’s other spy-influenced films, Beirut is a lot quieter and restrained, using action merely as a plot device to get from one point to another when words alone just won’t do; there’s little embellishment in this sense.  Hamm’s character is an expert negotiator, meaning that he does a lot of sitting and talking with the occasional break to stand while talking.

Still, Beirut skirts by the normal issues that come from verbose motion pictures with great performances and style, varying each image to make the dialogue sizzle in the blistering heat of Lebanon.

image via The Daily Collegian

And then there’s the elephant in the room: is Beirut racist?

Allow me to answer with a response that’s a cop-out: it depends.

Beirut continues the trend of Hollywood films that portray Middle Eastern people as the aggressors with an inclination to commit terrorist acts. Hell, even Best Picture winner Argo could fall into that same category.  However, the argument can be made that these films don’t call for Muslim characters that aren’t radical since these films deal only with radical figures.  Beirut works in this way as well.  For the story it’s telling, everything seems in check from my own personal perspective.

However, where Beirut fails is creating original ideas, and that’s where showing Middle Eastern people in a different light or diverging from the typical thriller layout may have added an extra bit of bite to the entire picture.  You’ve seen Beirut countless times before in other forms.  Whether it’s the aforementioned Argo, Homeland, or countless other projects, Beirut works similarly without much deviation.  In that sense, you can’t criticize Beirut for what it does do, but you can criticize it for what it doesn’t do.

Beirut is still very entertaining, but its straightforward approach will leave some cold. Beirut doesn’t exactly provide the most original or nuanced story, but for the story it tells, it’s pretty damn effective.  Writer Tony Gilroy mixes real history with an interesting, twisting story that continues to reveal interesting information in a way that is surprising and entertaining.

Jon Hamm leads the way as a suave, troubled negotiator, making for a compelling driver of the story.  You’ve seen this kind of character from Hamm in the past, but he’s pretty great at doing it.

Beirut certainly doesn’t reinvent the wheel, but not every entertaining movie has to do so.

Thanks for reading! What are your thoughts on Beirut? Comment down below!

*quotation via The New York Times

[…] *Michael Clayton may be a better performance. Still, “top two and probably not two” is a good place to be on the all-time list. […]

Hmmm….I guess I didn’t look at it from this way. Compelling argument.

Just trying to share both sides! I think it’s worthy discussion to have considering how most films have some type of controversy attached to them these days.

Never heard of this one, but given its topic, it isn’t one that’s going to make it to the screens here.
Still, any new movie from Brad Anderson is worth checking out.

I would definitely check it out at some point! It’s worth a viewing!