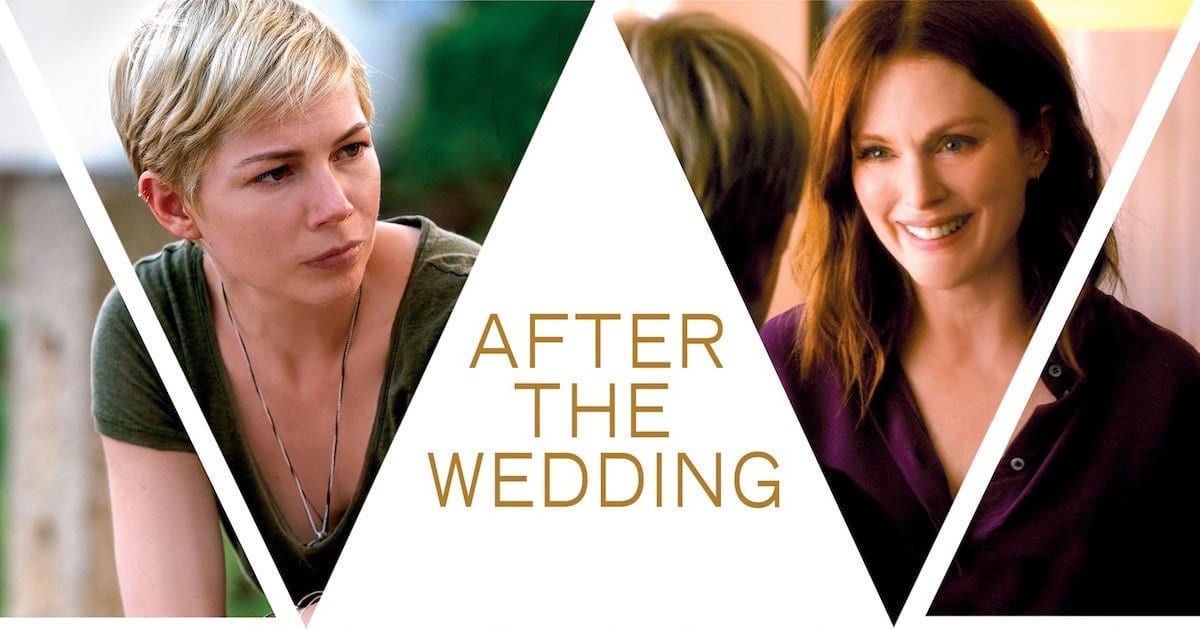 Hollywood has made a habit of repurposing buzzy foreign films into English-language stories. (Look no further than The Upside from just a few months ago.)  Most of these attempts are worthless, acting as soulless retreads in hopes of capturing and dominating the box office in the states for a few weeks with a seemingly inventive script that doesn’t have to break the bank in terms of budget. And then there’s the case of After the Wedding, which, despite its troubling elements, switches the genders of the leads in a way that adds new meaning to the film, while allowing some performers to flex their acting muscles to the fullest.

On the outskirts of Calcutta, Isabel (Williams) looks over children at a local orphanage, giving them a home and keeping them off the streets. But the orphanage is in desperate need of money in order to stay afloat, so Isabel flies to New York to meet with Teresa, the owner of a large media company who had previously agreed to become a benefactor of the orphanage, per Teresa’s request.

The problem is that the meeting could not have come at a more difficult time for Teresa. She is in the middle of putting the last few touches on her daughter Grace’s (Quinn) wedding that weekend, so she tells Isabel that they’ll reconvene after the wedding. She even insists that Isabel come to the wedding to make the most of her trip.

However, upon arriving at the wedding, Isabel learns of a shocking development that changes her and Teresa’s family’s life.

Flipping the Relationships on Their Heads

Bart Freundlich adapted the script of the 2006 film of the same name from Susanne Bier, whom you may know as the director of the recent — and head-scratching — hit Bird Box. The Danish drama circled around Mads Mikkelsen and his own plight to save an orphanage in Calcutta, leading him down a path of his own shocking revelations in a very weepy melodrama.

As for the 2019 version, Freundlich flipped the genders, choosing to focus on two woman characters now played by Michelle Williams and  Julianne Moore, with Billy Crudup acting as an important supporting character. Considering the dynamics at play in this film, the gender switch offers a new context for this storyline, placing the characters within different dynamics that make for a refreshing twist on the story.

Mads Mikkelsen in the 2006 version of After the Wedding. Image via The Playlist

After the Wedding is Full of Outrageous Performances

After the Wedding is a good ol’ fashioned drama, a movie where incredibly talented actors have every opportunity to show why they’re so great with long monologues and complex character dynamics. Bart Freundlich once again pairs up with his wife Julianne Moore, giving her a meaty role where she moves from someone who is stern, powerful, and confident into an overwhelmed mother and CEO that often feels like she is letting everyone down around her. Moore is so captivating as a woman with many layers; she has a front for a front, avoiding being seen as vulnerable or out of control at all costs.

Moore has a wonderful rapport with her co-lead Michelle Williams, who offers a solidly subdued performance of her own. Williams’ character is never comfortable. She comes from India to a place that is literally and figuratively halfway around the world in terms of culture and interpersonal dealings. Williams is constantly struggling with her outward expression, fighting herself every step of the way as her situation becomes more heightened with each revelation. You get the sense that her character is always trying to fit in, but knows that it’ll never happen.

And then there’s Billy Crudup, who is always such a delight. He’s always a calming influence with his mannered vocal patterns and disarming smile. We find him doing more of the same in After the Wedding, only he has many of his own opportunities to show what he’s got as well.

Every actor is trying to one-up the other here, but it somehow works because each one of them has their own characteristics and ways of expressing themselves. It’s never a shouting match of acting talent, but more of a constant escalation of drama and emotion between them that works quite well.

After the Wedding becomes so weepy that “maudlin” would be a good description during its most cheesy moments. (Julianne Moore literally drinks herself into a moment of self-pity at one point during the film.) However, all the actors keep this movie together, espousing each line of dialogue with a level of authenticity that will even distract a lot of viewers from the film’s issues. I appreciate how, when a problem arises for these characters, they treat it like an actual situation, attempting to calmly sift through all the moving pieces while talking other characters off the metaphorical ledge. These characters get emotional — that’s blatantly obvious when you see the film — but they quickly bypass their sensitive states and sit down with the people with which they have problems to see what the best course of action is for everyone involved.

Not everyone reacts perfectly to each situation — there wouldn’t be any drama in this particular drama if that were the case — but each person responds within some realm of believability which makes the melodrama work more often than not.

What Should We Make of the Film’s Ickier Parts?

The beginning of After the Wedding is odd, to say the least. We start with an overhead shot of a village in Calcutta. The camera sweeps over the foliage and dirt roads, coming to a stop with Michelle Williams in an Indian robe with a dot on her third eye, leading a gaggle of underprivileged children in meditation. The film goes on to show that Williams is the only white person around, and she’s the only one that can solve the village’s problems. It’s such an odd framing device, that the idea of a white savior complex immediately jumped into my mind. It didn’t help that the other, more privileged white people in the film are the only ones that can come to the rescue, either.

After a while, the India angle of the film becomes an afterthought, giving way to affluent individuals and their own problems, which seems a tad in poor taste. There’s an attempt to tie it into Williams’ character’s mental state, but it’s never fully realized. I imagine that many pundits will have many thoughts about this piece of the film when it gets its wide release, so much so that it will overtake the rest of the discussion around the film. Still, it’s After the Wedding‘s own fault for allowing it to happen in the first place. Incredibly weepy and mostly earnest, After the Wedding is flawed but mainly excels because Julianne Moore, Michelle Williams, and Billy Crudup put the team on their backs. All of them are magnetic in their own, idiosyncratic ways, navigating the viewer through a narrative that manages to become more than a straightforward melodrama script.

And yet, the distasteful moments of After the Wedding stick out more and more over time. For many, I imagine that the combination of overly sentimental material and unfortunate characterizations will simply be too much. I know I’ve soured on it a bit since first viewing it at Sundance earlier this year.

Thank you for reading! What are your thoughts on After the Wedding? Comment down below!

The contrasting effort of the After The Wedding script, whether the first film or the one reviewed here are important. Poor struggling young people in India over against the well-heeled American family in their upper middle class issues is something that upper middle class folks need to see, especially in the “age of Trumpf.” I thought, in both films, the American family and the Danish family are terribly liberal in their lifestyles. But it didn’t hit me as hard with just having the Danish version since I felt that a “routine” wealthy Danish family would live a move progressive life. With the American family in contrast with the poor kids outside Calcutta, the stretch was greater, even though I know that Moore and Williams are liberally inclined in their ways of thinking. All three leads are super fine. I wonder, if the Academy will take note the Crudup’s character’s name is OSCAR. ;)

‘Mrs. Doubtfire’ is More Relatable Than Ever 25...