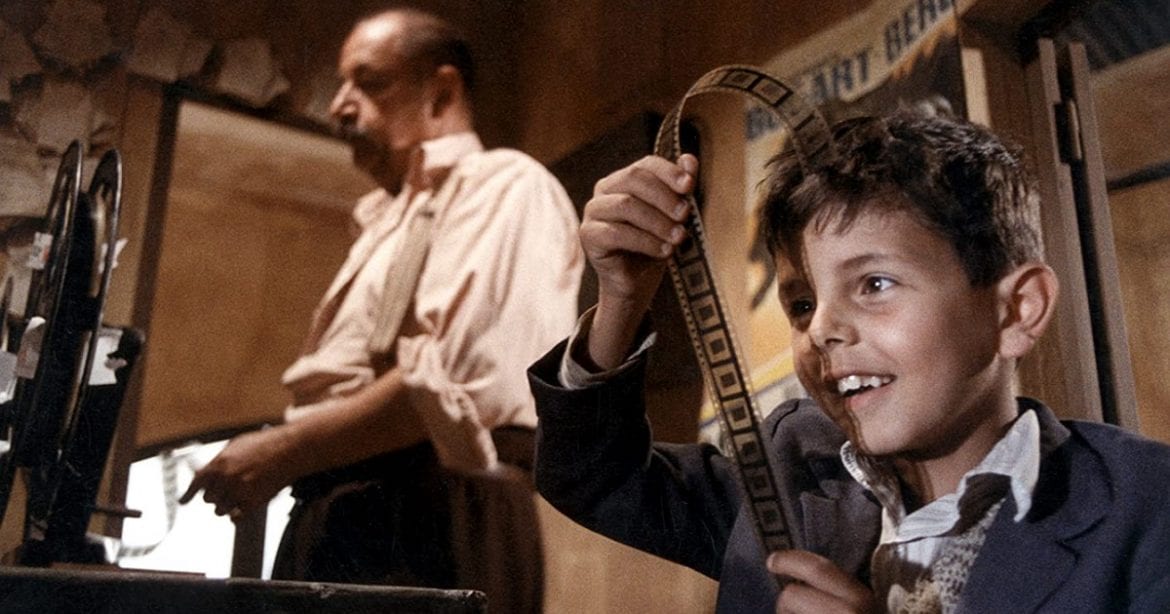 Few films capture the theatrical experience as lovingly as Cinema Paradiso. The 1988 Italian film won the Best Foreign Language Film Academy Award and serves as one of the most beautiful love letters to cinema and the wonder it creates in the lives of those who connect to it. There have been countless reviews and essays about Cinema Paradiso that have worded how successful it is in what it sets out to do better than I ever could. But this will not be a standard review beyond me urging any reader who loves film, and/or feels a deep connection to the medium to seek Cinema Paradiso out and allow it to move you. I genuinely cannot imagine anyone who has a love for this art form not being deeply touched by the experience.

Rewatching the film last night, I was struck by how much more moving I found the experience to be when compared to my previous viewing. Amid the public health crisis the United States continues to face, I haven’t been to a movie theater since March. This is the longest I have gone without seeing a film in theaters as far back as I can remember. The viewing has caused me to ponder what precisely the theatrical experience represents to me, and on an even deeper level, what film means to me.

There are parallels in Cinema Paradiso to my own life that I really connected to, the main being that I was also a young boy obsessed with film who was raised by a single mother. The first eight years of my life were spent in a turbulent and abusive household, and that was where I first latched onto film as an escape from that reality. I watched everything in the house that I was allowed to; and the films I wasn’t allowed to, I would stare at the cases of. I cannot tell you how many days I spent far too much time looking at the VHS tape of Alien wondering what was inside of the egg, and how many times I begged my Mom to let me watch it as a young child (Mom finally allowed me to watch Alien when I was 11 years old and it was well worth the years of curiosity and impatient anticipation).

When I was eight years old, my Mom took me and my sisters out of that environment in search of a better life, but film remained something I obsessed over. After school each day, I would walk across the street to my Mom’s work, hoping the entire time that she would be off of her computer in a meeting so I could scour IMDb, making a mental list of all the films that sparked my curiosity and I would imagine what the plot of the films would entail. On days where my Mom was in her office working on her computer, I would go into the offices of her bosses Dennis and Errol, and I would talk to them about movies non-stop. I remember Dennis telling me about Groundhog Day and allowing me to borrow it. Every time I would walk into Errol’s office, he would greet me by asking, “Spencer, have you seen any good movies recently?”

I was also fortunate enough to spend my youth in a time when video rental stores were still around. I would eagerly anticipate anytime my Mom would have to go to the grocery store as it would mean I could go along and browse the video rental store they had inside. Mom would tell me to meet her at the check-out, but I would always get lost in the cases of the films (probably intentionally), and Mom would have to come get me, at which time I would beg her to allow me to rent a film, which I would then obsessively talk about for the entire drive home. I still remember the day the video store in the grocery store closed and I had to plead with my Mom to shift our allegiances to Video Plus (which had a much larger and far superior collection of films).

I also was a regular at the library where I would check out films (I quickly discovered that I could check out R-rated films, no questions asked). The librarians quickly came to know me as the kid who constantly was requesting films from other libraries. Where other kids around my age would play Runescape on the library computers, I would use my 30 minutes to read about upcoming theatrical releases that I would beg my Mom to take me to (oftentimes successfully).

Beyond watching films, my group of friends made (terrible) films. My best friends Landon, Matt, Colton, Jeremy, and Joey made all sorts of different films from original projects like the Nerd Herd trilogy and The Abandoned (by far our biggest failure), to adaptations of famous works such as Romeo and Juliet and Of Mice and Men. (We got our friend Jennee to play Juliet in the former, but by the time we made Of Mice and Men, any and all girls wanted nothing to do with our films anymore so we had to improvise and dress Colton as my wife. I also had an implied sex scene in our adaptation of 1984 with my friend Jeremy which was shown in high school.) Our most ambitious (and unfinished) project was a zombie film where we perfected the art of making fake blood. Many of my favorite memories as a teenager were spent editing the footage with Landon, trying to decide what ways to maximize the comedic effect (even if that meant sinking to the level of adding in fart noises, we were most certainly not above the juvenile gags).

The primary way that Cinema Paradiso displays how film connects people is in the theatrical experience. For many people who love film, the theatrical experience is a very special aspect of that love. I personally consider the theatrical experience to be the closest thing I have to church. I can enter a place where I witness a story that at its best, can inform my humanity. I can see a film by myself, but feel like I experienced something with the strangers who also watched the film alongside me. I was fortunate to have a Mom who loved going to films in the theater and regularly took my sisters and me from the time we were very young. That created the love I hold and cherish to this day.

When I think of the theatrical experience, I think of summers as teenagers we would wait in line for the midnight showing for any film we had even a mild interest in seeing (not only before the days of assigned seating that required you to wait in line for hours, but also when films actually had their first screening at 12:01 a.m.). I grew up in a relatively small city, so many of the faces became familiar over the years. As cliché as it sounds, the movie theater was my home away from home, even before I began working there. There is something so special to me about my memories of going to midnight showings with my friends and discussing the film for the week after until the next one came along. Or the time Landon, Matt, Jeremy, and I slept outside the theater doors on concrete to be first in line for The Dark Knight Rises. (In the morning, we were greeted by a baffled theater employee who asked, “Did you guys sleep here?”) It is a feeling I have done my very best to preserve into my adulthood. Prior to theaters closing, I would see at least one film a week in theaters. It is such a regular part of my life that I took for granted how special to me it truly is.

I said in my opening paragraph that this wouldn’t be a typical review of Cinema Paradiso, but in many ways, I feel I have perfectly captured the way I feel about this film due to how much it made me feel. It caused me to truly ponder how film has meant to me in the 25 years I have spent on this Earth and it made me feel a deep gratitude that I have film to turn to no matter what I am dealing with in my everyday life. I love movies so much. I love how they bring us together, how they allow us to feel connected to one another, no matter our differences. I find that to be such a beautiful and wondrous thing.

However, it also made me feel a deep sadness. I miss the theatrical experience with my entire heart. I miss the smell of the theater. I miss the posters lit up and lined across the brick exterior. I miss a teenager scanning my ticket for an R-rated film and asking to see my ID. I miss arguing about It Comes At Night in the parking lot of a theater until 1 in the morning with my friend, Cory. I miss the feeling of watching a truly terrible film and feeling the sands of time slowly drift away as I march closer and closer to my inevitable death. I miss going to the Alamo Drafthouse for a date with my girlfriend, Kindred. I miss exiting the theater into the night after a truly special film.

I miss going to the movies.

Thank you for reading! What are your thoughts on Cinema Paradiso? Comment down below!

[…] all that 2020 has thrown our way, I don’t blame anyone for seeking soothing, uplifting entertainment. We need every excuse to inject a little happiness in our lives! With that in mind, Dean […]

This is a great review. I love it when I read something that makes me want to run and find the film to watch. Great writing by the author too!