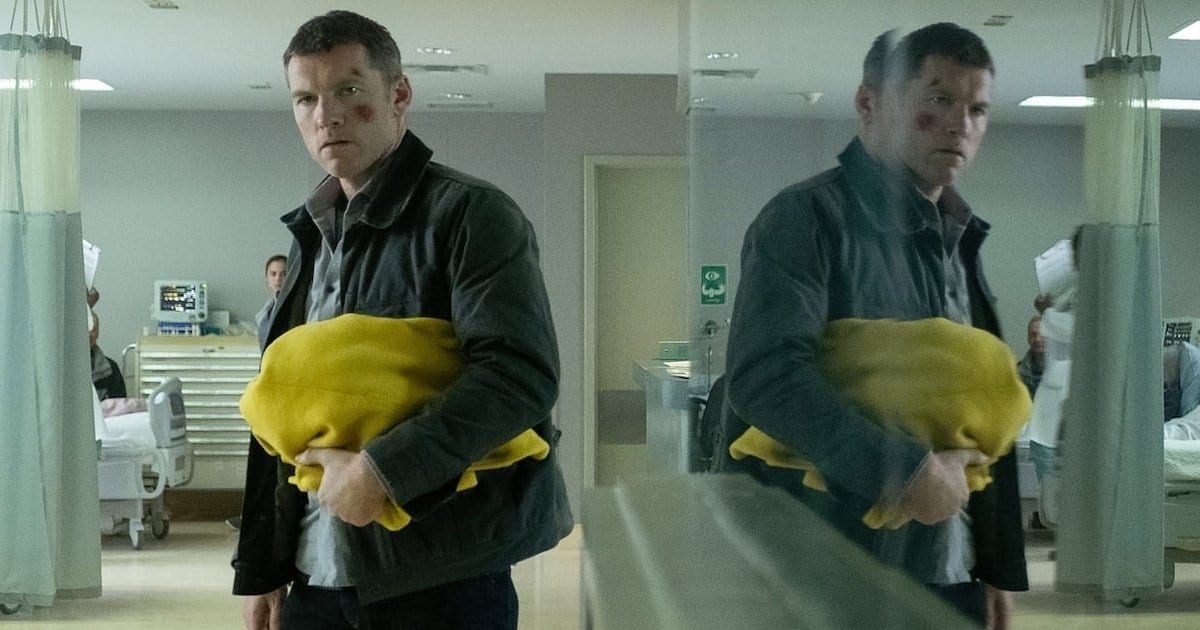 Fractured is from the writer of such cinematic milestones as Ballistic: Ecks vs Sever, Wrong Turn 5, and The Marine 4, which is the third sequel to a movie starring a wrestler that isn’t The Rock, and doesn’t even have the original wrestler in it. Fractured is still the worst thing on his IMDb page. By a long way. It’s 100 minutes that you will never get back. Spending an hour and forty minutes in a traffic jam would be less frustrating and pointless. This is more like spending time in a traffic jam between two places you don’t want to get to.

This review will not be spoiler-free. I hope to warn you off more than anything.

Written By: Alan B. McElroy

Driving cross-country, Ray (Worthington) and his wife (Rabe) and daughter (Capri) stop at a highway rest area where his daughter falls and breaks her arm. After a frantic rush to the hospital and a clash with the check-in nurse, Ray is finally able to get her to a doctor. While the wife and daughter go downstairs for an MRI, Ray, exhausted, passes out in a chair in the lobby. Upon waking up, they have no record or knowledge of Ray’s family ever being checked in.

Let’s Break It Down

Fractured opens with Ray, his wife Jo and daughter Peri driving through a cold, blue-filtered Midwestern area. They have just enough of a conversation to let us know Ray is an ex-alcoholic. Peri needs the bathroom so Ray pulls over at the gas station from the start of The Cabin In The Woods rather than having a six-year-old pee in a field. Little Peri follows a balloon to the edge of a hole and falls, breaking her arm.

They then race to the hospital, Ray speeding down the wrong side of the highway which, prior to the stop at the gas station, was specifically shown to be desolate and almost deserted and becomes at this point as crowded as the Indianapolis 500.

On arrival at the hospital, there is an extended period of bureaucratic runaround to get Peri admitted. The soundtrack tries valiantly to build suspense here by playing tense piano chords while people type. It is as about as effective as that sounds. Ray sees odd things, like paramedics handing over mystery boxes for stuffed-looking envelopes. Eventually, the kid is examined then the mother and daughter go to another part of the building for a scan.

Many hours later Ray goes to find them and is told they didn’t check in. Which is where Fractured looks briefly to be heading in a Taken or Breakdown direction. Did I mention that this is FORTY MINUTES IN to a 100-minute movie? Because it is. Would you have sat through forty minutes of Liam Neeson filling in forms before he started throat punching?  Well, it gets worse because Jai Courtney — I mean Sam Worthington — doesn’t really become ticked off even when told that his family wasn’t there. He gets a bit upset and the hospital security jumps to give him sedatives then lock him in a cupboard with a bunch of adrenaline shots and leave him to it.

This means Scott Eastwood…*checks notes*, no, Worthington, that one!… Worthington eventually runs harum-scarum through the hospital basement noticing all kinds of suspicious things. Organ boxes, shifty people, badly lit secret rooms — it all looks like it’s building to the hospital murdering people and selling organs. This would be a stupider but vastly more entertaining film.

(If you want to be unspoiled when watching Fractured, and trust me, you don’t want to watch Fractured, now is the time to stop reading)

Remember when Peri fell? When she does, Ray dives after Peri and bangs his head, the words of a flashback ringing in his head “…they’re gone” because *Twilight Zone music* Jo and Peri died years ago. Yes, Peri, the character that the audience JUST WATCHED GO OFF AND DO THINGS RAY WASN’T WATCHING only exists in Ray’s head. So what you’re watching for the rest of the movie’s runtime is the man in a hospital wearing a tinfoil hat, mumbling about the CIA stealing his thoughts. It’s massively inconsistent. Characters chat with Ray’s family and later say they’ve never seen them. Which, again, would make sense if they were a shadowy murder conspiracy but not if his family doesn’t exist.

Yes, Ray is having delusions some of the time, but which times?  Some of Fractured could be real, but who knows? It wouldn’t change the import one little bit if Ray turned out to have imagined the whole thing from a padded cell. Back to that opening drive home from his in-laws after Thanksgiving — where was he actually driving from, or to? I don’t know and I’ll bet all the tea in China that the writer didn’t know or care either.

The audience is asked to accept that Ray has, at some point in the previous eight years, refused to accept the loss of his family. Really? All of eight years? He is still out in public and has enough money to run a car so it can’t have been the whole eight years, right? I may be overthinking it. Ray then has ANOTHER breakdown and slowly re-learns his family is dead. What brought that on? Was it the blow after diving to save his falling child who wasn’t there to fall because she died nearly a decade ago?

Look, I can accept a certain suspension of disbelief in film. I watched Hobbs and Shaw in the cinema. Twice. The point is that Fractured doesn’t know that it’s a dumb film. Despite what the trailer suggests, it’s not an action film. Those 30 seconds of explosions and car action are almost the sum total of action in the whole movie. It’s one hundred, long, pointless minutes of movie. The vast majority of Fractured is just Liam Hems…Sam Worthington looking confused while other actors are confused by him.

Fractured is the worst, most poorly written film I’ve seen in years. I haven’t seen a ‘twist’ this unsatisfactory since I Know Who Killed Me, and even Lindsay Lohan gave a committed performance in that instance. Avoid this movie like the plague.

Thanks for reading, and listening! What are your thoughts on Fractured? Comment down below!

I thought at first this would be a variation on The Lady Vanishes, Dying Room Only or several other “no the person you’re looking for was never here” films. This decision was … much worse. I’m constantly baffled by people who think “That’s right, it’s all in his head!” will be a brilliant twist that leaves us all shaken. It almost never is.

You know what? I watched this the other night and I couldn’t agree more with your review. It went down rabbit holes without having the skill required to do that in terms of leading an audience down a garden path, then throwing them onto another path. I actually think your F rating is more than generous. It was beyond belief dreadful.

Thank you. This was awesome and helpful. I saw it on my Netflix feed. It looked like it would probably be bad yet the trailer caused a problem. What happened? Would I have to watch to find out? I could always just fast-forward to the end – I’ve done that before to satisfy curiosity. Luckily, now I don’t have to. Thanks for saving me time. I will now rewatch “Stigmata” today instead – the director’s cut. That’s a movie I enjoy.