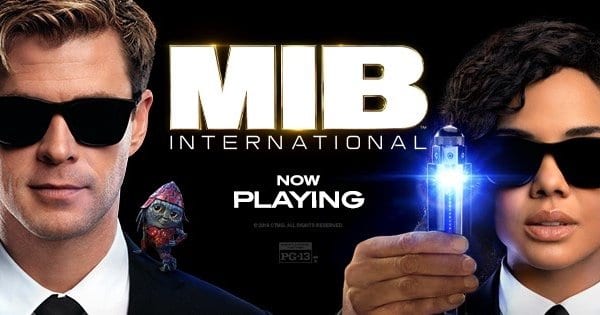 Today I’m here to review a movie no one asked for. Not a single soul. Don’t get me wrong, Chris Hemsworth and Tessa Thompson is a match we’ve seen work before, and the Men In Black Universe brims with potential, however, the state in which Men In Black: International finds itself is best described as a tumbleweed in the wind — completely disinterested!

Movie studios struggle today to do anything but recycle any movie they can later mass produce into fifteen sequels and launch into a cinematic universe. I thought the Men In Black window closed a long time ago, yet here we are. It’s not just Sony that is responsible for this. Just a decade ago no one expected Disney would put out a live-action remake of Aladdin or a “live-action” Lion King. In current times, franchises aren’t allowed to age.

That’s particularly why movies like the one I’m about to review don’t create excitement. They only fill the void of what would be an empty week at the box office without them.

Ever since she discovered alien life, Molly (Tessa Thompson) has been focused on finding the organization responsible for keeping it in check in hopes of becoming one of its agents. With years to search and hone her skills, her dream comes true. She infiltrates the headquarters, gains a novice status, moves to England and meets her new partner (Hemsworth), an experienced yet hubris-filled individual.

Together, they embark to prove themselves against all alien odds with secrets, wits, weapons, and fine looking black suits.

Allow me to take things back to November of 2014. A well-known hacker group leaks the plans of the wretched Sony Pictures to the world. At last! Their schemes were now unveiled. It was at this moment in history did everyone realize the dire state at which their movie division was in. They had the plans to make an all-female Ghostbusters, produce dozen more Spider-Man spin-offs and other questionable projects, most of which did not see the light of day.

One of their ideas, though, did sound promising — a crossover with the characters from the 21 Jump Street universe. Skip to a few years later, the frost set in with the announcement to scrap the idea completely and instead make a continuation with a new batch of characters. This was likely where many people — including me — lost interest.

Finding replacements for Will Smith and Tommy Lee Jones is like pushing a heavy cart up a hill. Their chemistry was always the best part of every movie, regardless of the quality. To switch out such elements to a well-established IP is a challenge all franchises have to overcome.

Not to mention Sony needs this film to do more than just take off. The company’s motion picture division finds itself at an odd spot. If it weren’t for Jumanji: Welcome to the Jungle and the Spider-Man brand, they would struggle to stay afloat. Their situation is looking better now, but the constant attempts to squeeze out what’s remaining out of properties such as the Men In Black — all of which don’t necessarily warrant long-running continuations — still leaves a taste of desperation over at Sony’s part. Things like this make you wonder if the studio really is in a different state than it was in 2014.

Right off the get-go, I’ll say that it’s the chemistry between these two actors that carries the film. Tessa Thompson is the big standout. She was always one of those actors I never understood the craze around. After seeing her performance here I now understand what everyone admires.

Tessa plays our smart, witty and lovable main character. Her traits don’t ever become one-note as she charismatically faces opposition. Some recent female protagonists are given one strong trait that’s overly emphasized to a point where they unintentionally start to come off as unlikable. Here, on the other hand, there is way more to Molly than just a few quirky lines and general independence. The options as to what she does never run short and that’s makes her so fun to watch on screen. As a result, she’s never predictable.

I’m by far the biggest fan of how they incorporated Tessa’s character into the MIB world. It ties so nicely to her motivations, who she is and what she’s chasing for in life. The screenwriters crafted a solid character, one you want to see succeed.

Opposite to her plays Chris Hemsworth who continuously pursues the types of roles that match his charm. He is all of the dashing, funny and confident you associate with the actor. Sometimes doing too much of the same can be dangerous. Thankfully, Hemsworth finds a way to tread the line carefully. What sets him apart in Men In Black: International from his other roles is that here, he’s not a content man. This means he doesn’t lean into the cloud of sunshine demeanor normally attributed to the actor. But at the same time, it doesn’t stop him from being playful. 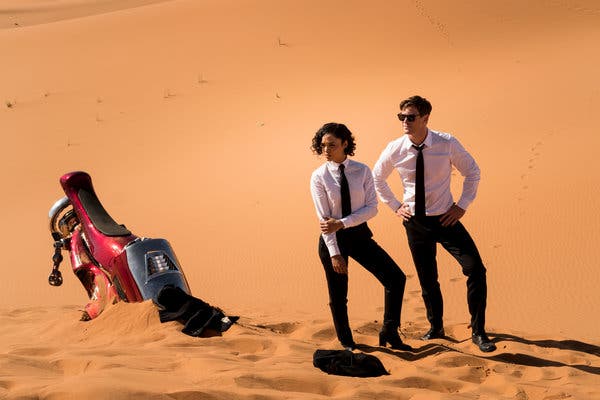 Both Tessa and Chris are strong characters. She is chasing a dream, he is forgetting to look for one. This is why watching them together on screen isn’t tiring. It’s the fact they both come from different walks of life and despite it, they’re not at each other’s throats. Thankfully, there’s not an obvious conflict so that our two leads can then save the day after some sort of resolution.

The pair is vastly different from Will Smith and Tommy Lee Jones yet work just as well. If there’s anyone worried or bothered by the new choices, rest easy. They deliver big time by completing each other on all fronts without their differences hitting you over the head. I enjoyed watching the two talk back and forth even when discussing the little details.

Now, when it comes to the scale, things start to dwindle. Because of such strong character introductions, things were off to a great start until the story shifts away and into everything that has as little to do with them as possible.

That’s not to say it’s bad, there’s just too little. It’s only in moments where the story displays who these characters are that I ever get any sense of direction.

The main story revolves around a weapon which many sides want to get. The minute this story kicks off everything begins to hover around forgettable action and secondary characters.

The film jumps from location to location with no purpose other than to create an illusion of a progressing plot. Every scene starting from act two doesn’t service the next; there’s no reward in following what’s happening. The movie has a MacGuffin which theoretically should tie many of the threads together but, as you might imagine, this is not the case. Though the plot revolves around one item, too many deviating scenes creates a serious lack of focus.

The motorbike scene captured in the picture above only serves as an action sequence — and not necessarily a good one — that’s topped off with terrible effects. Rebecca Ferguson’s character is ridiculous, disposable and another result of throwing in as many things possible and crossing one’s fingers that of them actually matters along the way. None of them get the time or the development to shine.

The final twenty or so minutes kind of salvage this mishmash by picking up the tempo. It’s at this moment did the screenwriters probably realize they need an ending that actually ties to their characters. Men in Black: International finally takes focus, only it’s a little too late. You can feel the pace picking up and things taking on some kind of purpose, even if a silly one. If that were the case for the whole middle chunk of the movie, I would’ve gladly given it the seal of approval.

Men In Black: International loves to remind one of its unrefined form. The character that encapsulates this and everything else wrong with the movie is Kumail Nanjiani’s little green alien, Pawny. Every time he comes on screen, I immediately wanted to skip to the next part. He is a small, annoying, unfunny and unbearable alien only there to distract kids from complaining about their butts hurting from sitting too long; his presence is the best example of what I’d leave on the cutting floor.

I am almost convinced this character was either not originally in the movie or his role was less time-consuming. His scenes are always weirdly edited and stitched together with the rest. Just in his first encounter with our heroes, the film cuts to him speaking back and forth with no variation in shot composition over ten times — almost all close-ups as if getting Pawny and live-action actors in one shot would mean going over budget! Actors would kneel, get right in front and face the camera, pretending they’re speaking to him from a claustrophobic perspective that would cover up the dead-eyed CGI.

It’s confusing that a movie costing $100 million would struggle so much with visual effects. Aliens in general look exactly like the ones from Phantom Menace (1999). Maybe the more cartoon style works for this universe, but the special effects hampered a lot of action scenes.

The enemies in the movie were twins who, like the rest of the side characters aside from Agent O and Liam Neeson, were downright forgettable.

And to top it off, there’s the score. Exciting music would sometimes start playing during lengthy, casual conversations. It’s yet another distraction in a film filled with them.

This summer, it seems like the air conditioning will be the only thing getting anyone into the theater for Men In Black: International. Chris Hemsworth and Tessa Thompson deliver on simple yet engaging, fun characters that setup the story to do something worthwhile. Meanwhile, the film merely scratches the surface. The rest is wasteful characters and multiple plot threads that make it a slog to get through.

The story is all over the place with too much of, well, nothing. Men In Black: International does everything in its power to concentrate on everything but the thing it set up best at the beginning which is the relationship between our main leads. It’s really a shame given the pleasantly surprising first thirty minutes. For a second I thought the wretched Sony Pictures really had me there for a second. Next time, if they want to continue a franchise past its prime they need to have a script with purpose, one that doesn’t change the topic mid-sentence.

Thank you for reading! What are your thoughts on Men In Black: International? Comment down below!

[…] B. Jordan and Tessa Thompson are two of my favorite actors working right now, so yeah, the cast ain’t bad. Jordan has an […]

Heard it’s really interesting, love to see it, or feature it on my site. Let me know if you have a download link