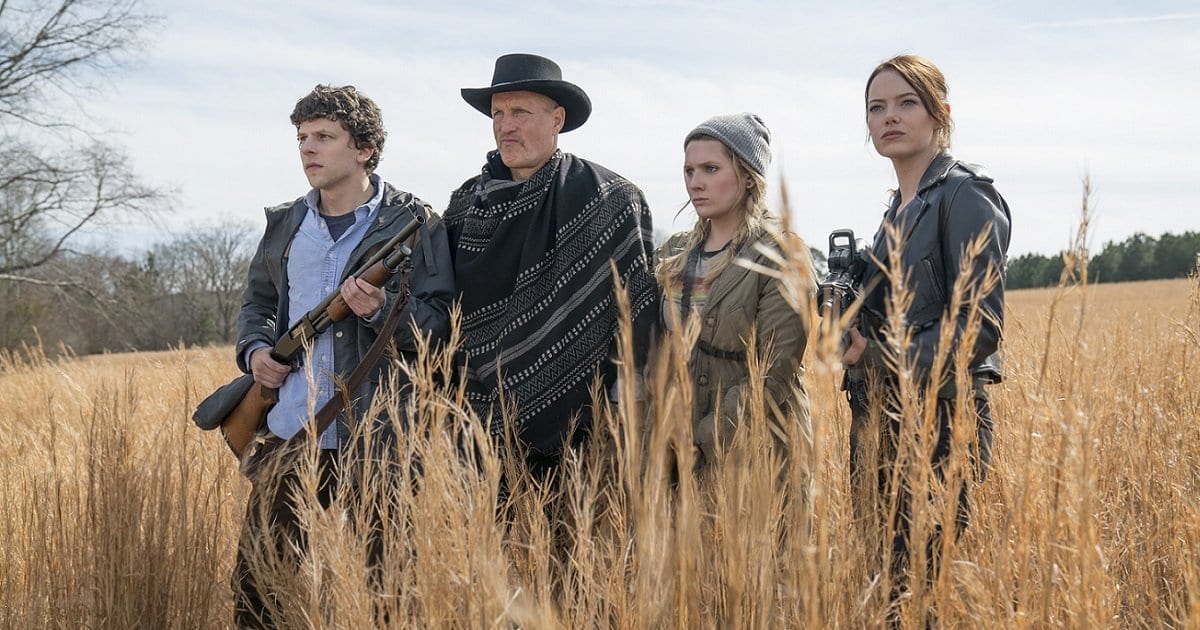 Zombieland helped extend the zombie-boom of the late 2000s, but Zombieland: Double Tap comes long after the boom has crashed and burned. Ten years out from the original, the sequel has a lot to live up to. Not only does Zombieland have a tremendous legacy and following, but the zombie genre has been *ahem* beaten to death in the interval between the two films. Fortunately, the original team behind the zany family comedy set in post-apocalyptic America is back and firing on all cylinders.

Ten years after their dysfunctional family came together, the gang of Tallahassee (Harrelson), Colombus (Eisenberg), Wichita (Stone), and Little Rock (Breslin) is drifting apart. When Little Rock runs away with a mysterious boy, Wichita rounds up Tallahassee and Colombus to go after her. Along the way they stumble upon the woo girl, Madison (Deutch), mysterious Nevada (Dawson), and a new breed of zombies more adapted to the hunt.

The family has to figure out its issues and remember what brought them together if they hope to survive another day in the United States of Zombieland. Oh, and Bill Murray fits into the mix here somewhere.

Zombieland holds a special place in my heart. Don’t tell my Mom, but this was the first movie that I was specifically told that I wasn’t allowed to see, that I went to a friend’s house and watched anyways. A mere lad of 11, I wasn’t exposed much to zombies or the horror genre in general. While Zombieland just barely fits within those lines, it still blew my mind and opened up the door to a disturbing and spooky part of cinema. I’ve always had a fondness for the original. Yet, I wasn’t excited about seeing a sequel try to recapture the magic of a film that stands on its own.

After ten years of trying to make it happen, a canceled TV series, and a revolving door of creatives trying to pen a script, the status of the rumored Zombieland 2 didn’t seem hopeful. This was due greatly in part to resistance from some of the cast. Other than Woody Harrelson, this cast was a group of close-to-nobodies when Zombieland hit the screen. Since then Jesse Eisenberg and Emma Stone have exploded onto the scene. Abigail Breslin has also put an impressive few roles under her belt. To get even one of them to come back the movie had to have promise. Harrelson even reportedly passed on the first few ideas that were floated his way. Fortunately, however, the stars aligned. The original behind the camera team came back after successes like Deadpool and Venom, and the stars all had a zombie sized break in their schedules. The result is Zombieland: Double Tap.

Despite the Title, It’s Not About Zombies

At its core, Zombieland and Zombieland: Double Tap are stories about family. A severely dysfunctional family, but a family none the less. The actual zombie theatrics of the duology really aren’t that impressive. There are a few savage kills in the opening and flashback scenes in the original. The sequel also throws in a decent amount of gore throughout. However, there really aren’t many zombies in Zombieland. The focus of this movie is its human characters and the ways they get on each other’s nerves. This is where the magic happens. This is why we care about these characters and have awaited their return for so long.  The sexual tension between Wichita and Colombus, the macho tension between Tallahassee and Colombus, and the barriers these characters put up between each other are what keeps the story interesting.

Zombieland: Double Tap doesn’t forget the heart of the original. The human stories, besides how ridiculous their environment is, are still the same. These aren’t the most elaborate and complex characters ever written. However, they are some of the most fun and the most charming. As an audience, we know what makes each of them tick. We also know what each of them wants. Because we know these two things, we can track their journey as they survive Zombieland and learn how to live with one another. The Zombies are why you show up, but these human characters are why you stay.

These movies are stupid, and I mean that as a compliment. The charm of Zombieland: Double Tap comes from the fact that it is an absurd premise, and it’s self-aware of that fact. That’s the reason why the B-story in the original revolves around a Twinkie. That’s why Woody Harrelson spends a solid ten minutes of this film in an Elvis costume. The franchise has a solid read on what people would actually do if the world collapsed. The infighting and anarchy that often over-plagues the zombie genre aren’t apparent in Zombieland. Instead, we have characters doing what normal humans would do if society disappeared. They’d break into the White House, steal a bunch of pop-culture staples, and segway around the mall looking for neck pillows.

Zombieland: Double Tap works because its characters and their actions are relatable. Who wouldn’t want to spend every night in the Lincoln Bedroom or drive around in Elvis’ car if they had the opportunity?

Zombieland is a short movie, at barely over an hour and twenty minutes. At barely over an hour and a half, Zombieland: Double Tap isn’t much longer. These movies are very aware of their length and are careful not to overstay their welcome. The premises of these films are thin, and the writers and director are careful not to stretch them too thin so that they don’t hold. The creative team behind these films understands their audience and knows what they’re in the theater for. They deliver on the humor, the human story, and the chaos and then the credits roll before there’s anything else. These movies never become boring or exhausting because they are short, and they leaving you wanting more instead of overloading you on the premise.

Standing on Its Own

The easy thing to do, and this happens all the time with the horror genre, is to tell the same story again. Except in the sequel, there’s always a dumb twist, like Laurie being Michael’s sister, or there being two killers instead of one. Fortunately, Zombieland: Double Tap doesn’t dip into that pool as easily as it could. While some of the story beats feel similar, there are enough new characters and locations brought to the table to shake things up.

This movie is also very careful not to lean too heavily into the gags from the first film. While there is one scene that beats you over the head with Colombus’ rules from the first film, the majority of Double Tap steers clear of the jokes from the first movie. In fact, I don’t think Twinkies even get a single mention in the sequel, despite being such an iconic part of the original. Instead of relying on what made you laugh before, Double Tap goes out of its way to make you find new ways to laugh.

The Kind of Sequel We Need

Zombieland: Double Tap is just as good, if not better than the original. It’s a sequel that lets you explore the characters and the world you love while showing you new things you’ll love also. While it pays homage to its legacy and revels in its cult status, it’s careful not to dwell on itself too long. It takes the story further, the characters deeper, and the world wider. Though it’s been a long ten-year wait, it’s paid off spectacularly. Perhaps we don’t need a sequel every other year for a franchise to stay alive. I can’t wait to see what they do with Zombieland: Beware of Bathrooms in 2029.

While some of its story beats feel a little predictable, Zombieland: Double Tap stays just as irreverent and darkly comedic as its predecessor. It’s a sequel that reminds you of the movie you love while giving you more to enjoy. It’s short, it’s sweet, and it’s worth the ten-year wait. Zombieland is a franchise that knows its worth and delivers exactly that. You’ll get what you came for and not a minute more. Zombieland: Double Tap is popcorn entertainment at its finest.

Thank you for reading! What are your thoughts on Zombieland: Double Tap? Comment down below!

I actually enjoyed Zombieland: Doubletap more than the first one. I thought it was funnier. Thanks for your review.

Good to read this. My wife and I are Zombieland fans, and have been awaiting a sequel. Sequels are usually troublesome, and not to repeat your introduction, the first film’s premise was pretty thin, so I was anxious. Now I’m looking forward to seeing it at the theater tomorrow.