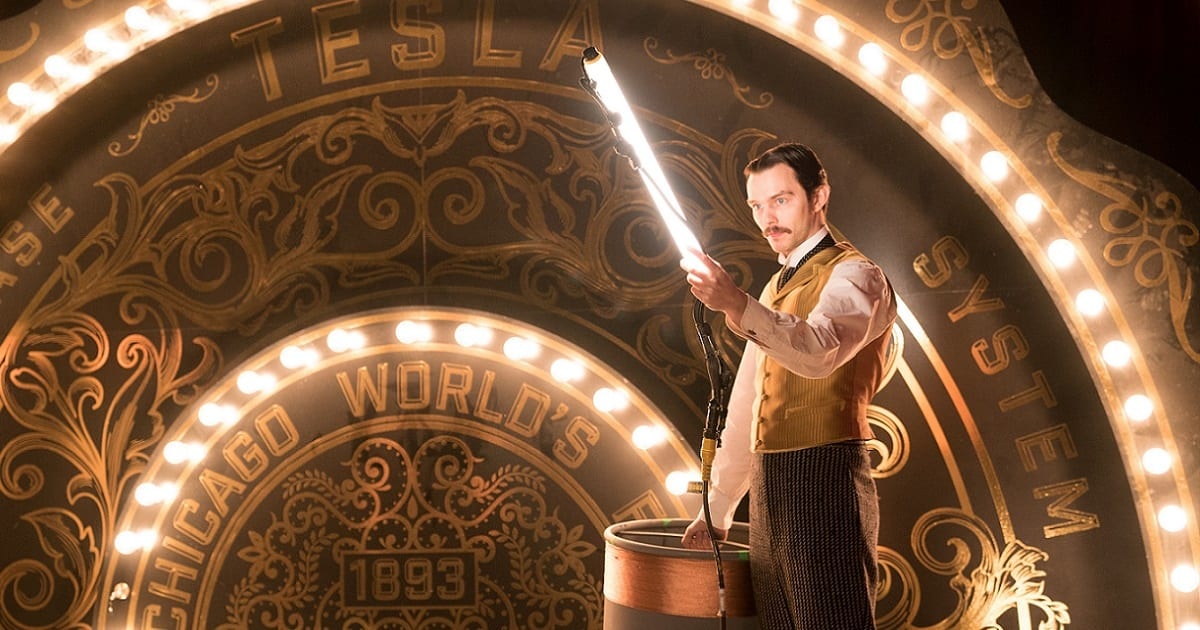 The Current War is actually the Director’s Cut of the initial film. The initial film, by most accounts, was a mess. Being distributed by The Weinstein Company, director Alfonso Gomez-Rejon was forced to release the film ahead of schedule after Weinstein recut the film himself behind his back. Upon its debut at the Toronto International Film Festival in 2017, it was panned by most audiences. The Harvey Weinstein scandal then came to light soon after and the status of the film was in limbo. Eventually, The Weinstein Company sold off the rights to the film to Lantern Entertainment. However, Producer Martin Scorsese still had final approval and he wasn’t satisfied with the Weinstein-driven first cut. Gomez-Rejon was then able to raise the necessary funds and reshoot/re-cut his vision of the film.

I never saw the first cut of the film, so I can’t critique it. However, the Director’s Cut that I viewed this weekend was much different than reports of the initial debut let on.

In the late 1800s, Thomas Edison (Cumberbatch) makes an electrical breakthrough with his 13hr lightbulb. The war between Edison’s Direct Current and George Westinghouse’s Alternating Current begins as each industrialist seeks to provide power to the entire continental United States. Edison suffers as a genius out of touch with the world and Westinghouse (Shannon) suffers as an industrialist just a few scientific breakthroughs behind. Everything changes for the two when Nikola Tesla (Hoult) steps to the forefront with his mechanical breakthroughs in energy-producing technology.

The Legacy of The Current War’s Leads

The rivalry between Edison and Tesla is legendary. The two inventors themselves are some of the most larger than life figures to ever enter the sciences. It’s difficult not to enter into this movie without some prior knowledge. Fortunately, the movie seems aware of that fact and doesn’t waste too much time with exposition. The Current War takes a gamble that you’ll be at least somewhat familiar with Edison and Tesla but takes some extra time to fill you in on the less notorious George Westinghouse, J.P. Morgan, and Samuel Insull.

Still, it’s difficult to view the leads of this film outside of the context of their legacy. We know that Edison “turned on the light”, yet we also know that Edison was somewhat of a crook. His inventions often came about without proper compensation to his employees. We also know that Edison was prone to playing dirty, including the electrocution of an elephant in an attempt to discredit Westinghouse and Tesla’s alternating current. This prior knowledge so engrained in American education makes it difficult to believe the film’s attempts to establish Edison’s conscience and unwillingness to strike first.

While it’s difficult to believe The Current War‘s take on Thomas Edison, it is not impossible. This impressive feat is accomplished by superb directing on behalf of Director, Alfonso Gomez-Rejon. Gomez-Rejon feels very aware of the issues his characters will have within the context of the viewer, and he adapts the film to fit those constraints. The script to The Current War could easily have been directed to be boring and visually dull. However, the Director’s eye and snappy pacing keep the film flashing from beat to beat without ever losing momentum.

Gomez- Rejon utilizes the lightbulb to superb effect. The film is filled with brightly buzzing filaments that move the eye and accent the drama behind the electric current. The film also very deliberately uses the camera as its third lead. The camera placement and movement feel uncomfortable and cramped throughout a good chunk of the movie, and rightly so, as it keeps the heat on Edison and lets us explore more of his character.

Much like how Tesla took a backseat to Edison in his lifetime, he takes a backseat to Edison and George Westinghouse in The Current War. While not what I was expecting to see, it feels like the appropriate move. Rather than fixating on the inventing process, which could quickly have become technical jargon and inaccessible to most audiences, the film focuses on the movements of its titans.

While Edison is the main focus of the film, George Westinghouse plays the only other true lead. Westinghouse and Edison juxtapose each other very well as they attempt to take the lead in the advancement of the electric light and expose the flaws within each other. This portrayal is aided greatly by Michael Shannon’s ability to appear gruff but sensible, grim but sincere. Westinghouse plays a noble and equal adversary to Edison, keeping the drama alive and relevant.

The Current War has a clear protagonist, but not a clear antagonist. While Edison is the obvious focus of the movie, he exhibits more antagonistic behaviors than his opposition. While the antagonist by definition of opposition, George Westinghouse, is portrayed much more like the film’s hero than its villain. Because of the construed nature of these relationships, we get to explore Thomas Edison as both hero and villain, as both human and legend.

We get to see Edison be the narcissistic inventor who has to be publicly declared the winner before he’s satisfied, but we also get to see Edison be a man. Much of Edison’s personal life is explored, as well as his touchy relationship with his family and close friends. Edison becomes much smaller throughout the film, and The Current War succeeds in its attempts to decipher one of America’s prolific inventors.

Perhaps the best thing about The Current War is the balance it strikes between drama and entertainment. While it doesn’t fully commit to either aspect of filmmaking, it balances them both very well. It is neither the most well-rounded drama nor is it the most popcorn entertaining film. However, it mixes the two well enough to keep you engaged while still getting its story across in a rapid manner. It doesn’t quite have the depth of much of 2019’s upcoming dramatic slate, but it is certainly reaching for more than the typical biopic.

The Current War is an electrifying tale of two of America’s most industrious icons. It is also the sincere portrayal of a broken man seeking comfort and control in the form of his craft. It’s not the perfect drama, but it strikes a tremendous balance in its pacing. Guided by the attentive hand of its director, The Current War is one of the most exciting dramas of the year, even though it’s not the most in-depth.

Thank you for reading! What are your thoughts on The Current War? Comment down below!