‘Between Two Ferns: The Movie’ is a Star-Studded Ode to Friendship, Silliness, and Pursuing Your Dreams 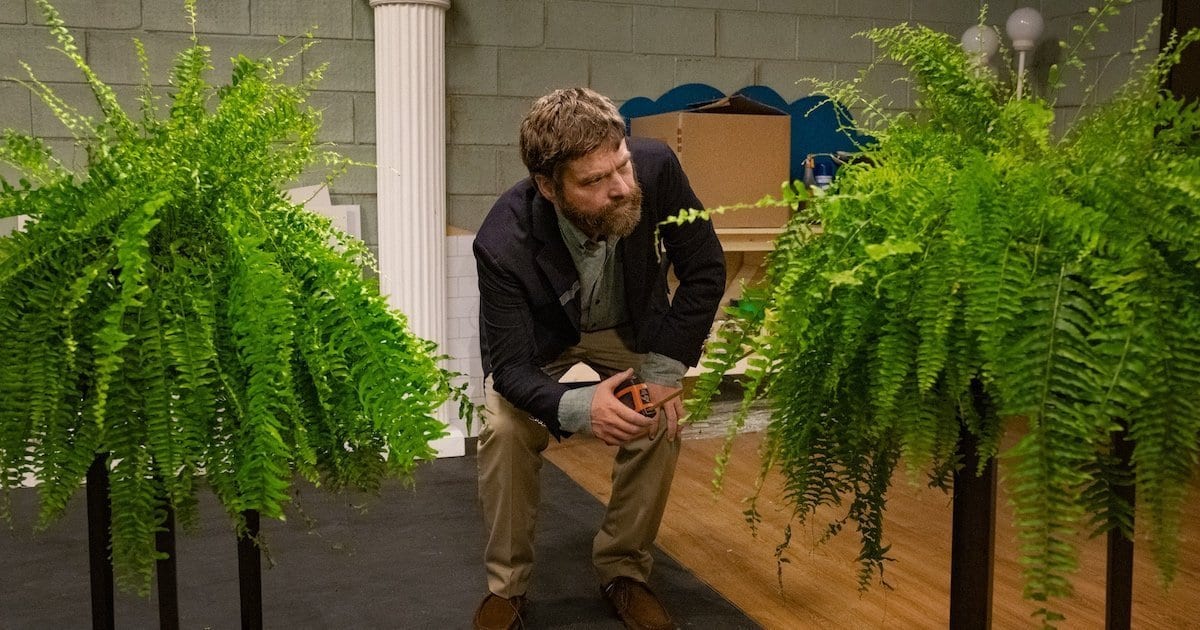 In hindsight, Netflix’s Between Two Ferns: The Movie was probably inevitable. Writer-director Scott Aukerman has basically cornered the market on the Fake Talk Show (apologies to Eric Andre). He co-created the hit Zach Galifianakis-hosted web series, founded alt-comedy podcast empire Earwolf, and hosts the network’s flagship show Comedy Bang! Bang! (and the IFC series it spawned). With all these projects, the comedian has built a prolific career undercutting and deconstructing both Hollywood and the very notion of celebrity.

So it makes sense for Aukerman to bring his most popular entity to the big screen (or small screen, as it were). His solo directorial debut doesn’t quite reach the same heights of zany joy as the show itself. Regardless, it’s an entertaining romp with more than a few killer laughs.

Zach Galifianakis (played by himself) is the incompetent, socially-inept host of low-budget talk show Between Two Ferns. The show has proven a viral comedy sensation since being discovered by Hollywood superstar Will Ferrell (himself). However, Zach feels tired of not being taken seriously. When a freak accident destroys the Ferns set, he’s forced to strike a deal with Ferrell. Zach must film and deliver 10 episodes of Ferns within two weeks in exchange for his own talk show on network TV. He hits the road with his reluctant but loyal crew (Lapkus, Gaul, Linayao) on a nationwide search for celebrity guests.

Unsurprisingly, the celebrity cameos comprise one of the main draws of a movie like this. Between Two Ferns: The Movie does not disappoint in that regard (seriously, so many celebrities agreed to appear in this thing). And indeed, there’s a fun head-rush you get when you recognize all the popular musicians and actors who appear onscreen.

But therein lies a problem. Ultimately, there’s only so much mileage you can get out of Ferns’ running gag of Galifianakis posing insulting queries to visibly uncomfortable A-listers. These segments start to feel awkward not because they’re supposed to, but because the jokes wore thin. This might be proof that the show’s humor is best digested in episode-length chunks instead of a 90-minute onslaught.

Plus, despite their best efforts to seem stiff and nervous, there’s always that overriding sense that Zach’s famous guests are in on the joke. We even get an end-credits outtakes montage showing each of them bursting into laughter at the more inappropriate questions. That, especially, feels like a deliberate assertion on Aukerman’s part that this is all in good fun. Not that it’s surprising that he wants to treat these very famous people kindly, but at a certain point it just turns into a festival of brown-nosing. At the end of the day, though, the celebs get an easy paycheck and a pat on the back for being “good sports,” and we all go home happy. Who could argue with those results? (I could.)

Anyone who’s watched Between Two Ferns or listened to Comedy Bang! Bang! knows that Aukerman has an extremely warped, esoteric sense of humor. He’s a big fan of non-sequiturs, willful obtuseness, obscure pop-culture references, and outright silliness. He applies his comedic brand to Between Two Ferns: The Movie in spades.

As with any other comedy of this ilk, your mileage may vary, and not all the jokes land. Their success mostly depends on individual tolerance for deadpan absurdism. Ferrell, playing an obnoxious, heightened version of himself, becomes something of a weak link in this regard. His scenes — especially one where he makes an unnecessarily grand entrance on a Segway — truly seem to drag on forever.

Ironically, a lot of the best jokes in BTF:TM actually come when it breaks from the talk-show format. Aukerman packs in countless blink-and-you’ll-miss-’em throwaway gags and one-liners that highlight his eccentric sensibilities.

Characters have names like Shirl Clarts and Burnt Millipede — obviously made-up monikers just ridiculous enough to sort of sound real. The “gee, isn’t Benedict Cumberbatch’s name confusing?” gag feels as old as comedy itself at this point. Nevertheless, I lost it when Galifianakis flubs the Sherlock star’s name as “Benefit Lumberjacks.”

Plus, the error-filled low-tech chyrons for each guest remain an entertaining visual gag (Keanu Reeves is billed as “Bill or Ted,” Awkwafina as “Crazy, Rich, Asian”). One of the more inspired set pieces involves the attempted heist of a batch of Fabergé eggs (housed, obviously, in a giant, ornate egg carton) from Peter Dinklage’s lavish home. Unabashedly goofy moments like these elevate the movie from a glorified clip show into a bonafide comedy.

Of course, the sprawling supporting cast littered with comic veterans and professional improvisers (whose familiar presences will no doubt thrill plenty of die-hard CBB fans) doesn’t hurt. Galifianakis continues to prove himself one of the most singular comedic geniuses working today. (You obviously don’t need me to tell you that.) He’s great here — even if his hapless idiot shtick gets tiresome after a while.

Lapkus proves a major bright spot, bringing a wry sweetness and wild physicality to her role as Zach’s devoted assistant Carol. Her interplay with her coworkers and their befuddled, irritable boss leads to some of the most endearing and human moments in the film. (Personal favorite one-liner: a diner server asks Lapkus if she’s ever seen a chicken strip, to which she replies, “I’ve never seen a chicken wear clothes!”)

Not everything in Between Two Ferns: The Movie works, and it leans too much on what some might call its sole joke (i.e., Galifianakis acting like an ungainly doofus). But it’s never anything less than charming, and when it does work, it’s one of the funniest and most inventive Netflix originals in a long while. Beneath its screwball antics lies a lovely celebration of friendship and the curative power of silliness. This movie, at its core, wants you to do more than just laugh. It wants you to believe in your dreams, no matter how weird or useless they might seem. I can get behind that.

Thank you for reading! What are your thoughts on Between Two Ferns: The Movie? Comment down below!