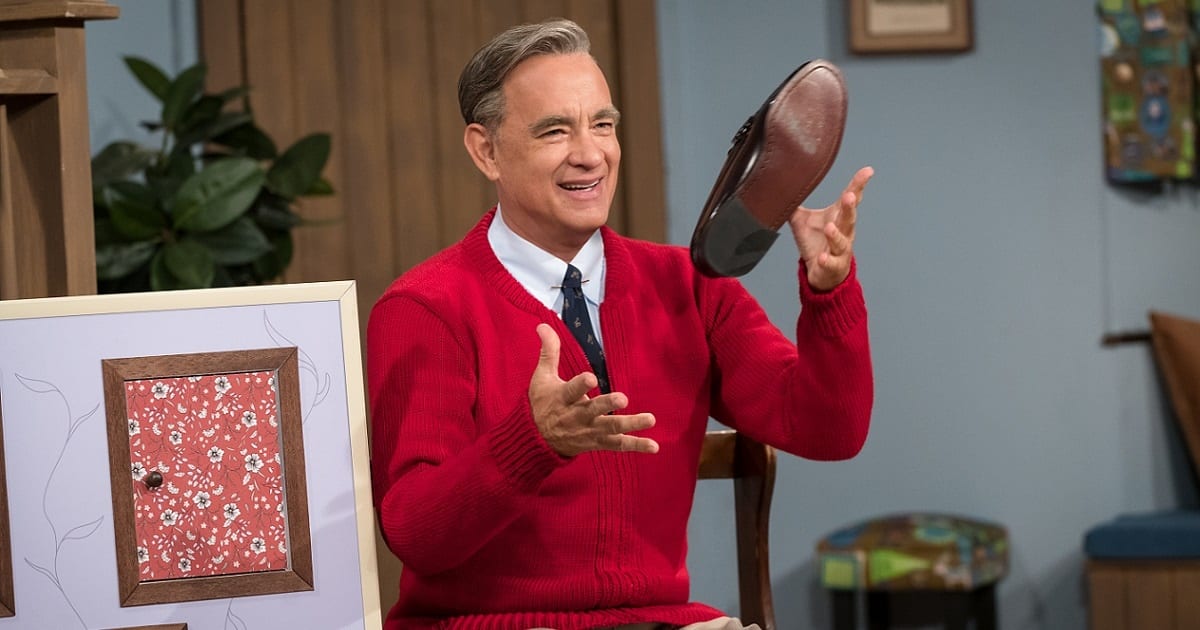 When Mister Rogers’ Neighborhood went off the air in 2001, it was the end of an era. Fred Rogers died two years later, leaving a gap in our cultural landscape that will never be filled. The messages of kindness, self-love, acceptance and the ability to openly express our feelings are timeless and ageless. The new movie, A Beautiful Day in the Neighborhood, helps to rekindle a lot of those feelings.

Based on a 1998 Esquire article entitled “Can You Say…Hero” written by journalist Tom Junod, A Beautiful Day in the Neighborhood follows Lloyd Vogel (Matthew Rhys, playing a fictional version of the real-life writer), who has a lot on his plate. Lloyd and his wife, Andrea (Susan Kelechi Watson) have an infant son. After many years of being absent, Lloyd’s father Jerry (Chris Cooper) comes back into the family fold. Naturally, this does not go over well with Lloyd, who is wrestling with a serious case of daddy issues.

If that was not enough, his reputation as a writer is a bit tarnished. Lloyd’s newest assignment is a brief write-up of Fred Rogers (Tom Hanks), the eponymous host of the children’s television program, Mister Rogers’ Neighborhood. Lloyd is bitter and cynical. He expects that his time with Rogers will be just enough to write the profile. What he does not know is that it will change the course of his life.

The job of an actor is to essentially become the character that they are playing. In this film, Hanks does more than become Fred Rogers. He brings him back to life in a way that humanizes the man that we all grew up watching. It would be easy to assume that the person that was on our television screens as children was a well-trained actor. Fred Rogers is almost too good to be true. In character, Hanks reveals that the Fred Rogers we watched on television was the same man when the cameras were not on. He also reveals that Rogers was a man, who like all of us, had his flaws. But instead of being a Debbie Downer, he used his flaws and his past to improve himself as a human being.

Fred Rogers was not known for having a larger than life personality. Both on-screen and off, he was known for being quiet, caring and curious about the world around him. In subduing his personality to become Rogers, Hanks brings out those qualities in such a way that it reminds audiences why they loved Mister Rogers and his television program. During interviews, Hanks often stated that he was often reminded by director Marielle Heller to quiet himself down to get into character.

On a related and fascinating note, Hanks recently found out that he and Fred Rogers are sixth cousins. Hanks is known for playing real people, but playing one’s newly discovered distant cousin adds something totally new to his portrayal. 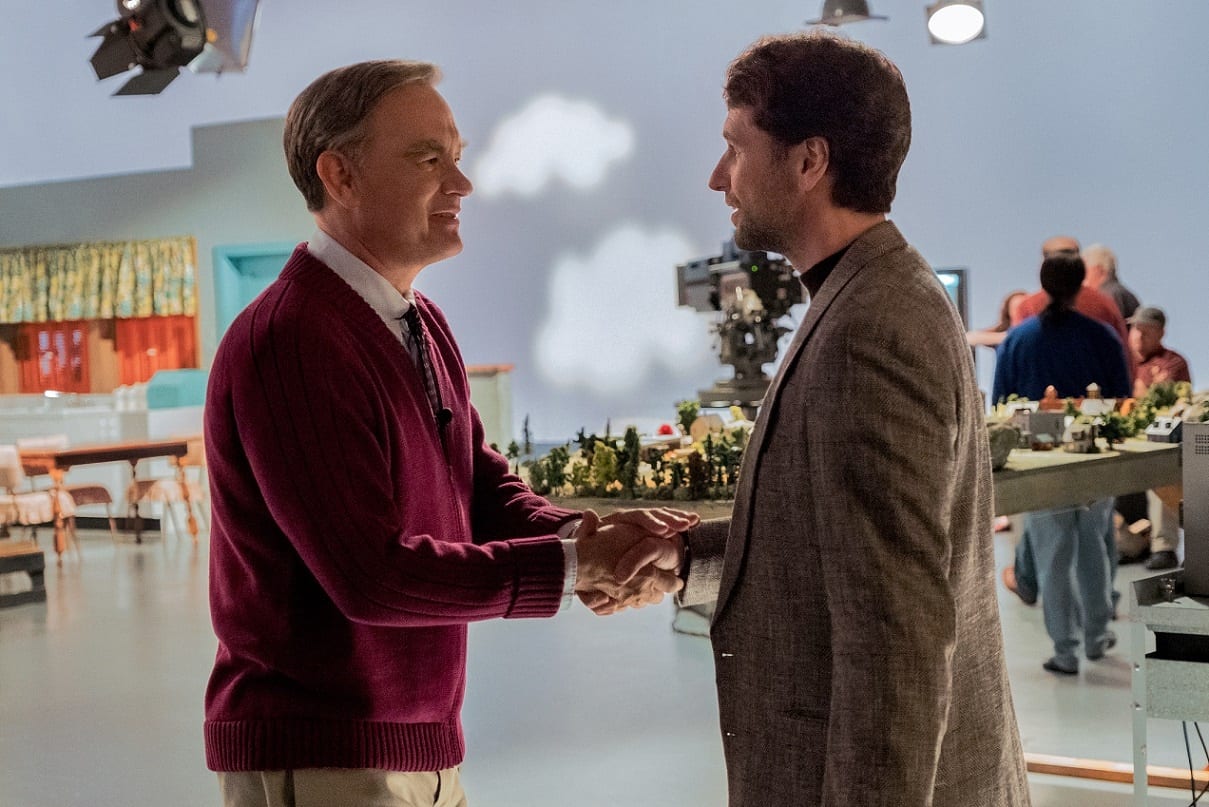 Nothing drives an emotional character arc further than mommy or daddy issues. The question is, have the screenwriter(s) created a narrative that feels true to life, or does it feel like a hokey Hallmark movie? Screenwriters Micah Fitzerman-Blue and Noah Harpster created a daddy issues narrative that feels true to life. I would think that anyone who has lived with a dying mother and a father who was chronically absent from his children’s lives would grow up with a chip on their shoulder. It is this chip that start’s Lloyd’s emotional journey from anger to acceptance.

When his father comes back into his life for his sister’s wedding, Lloyd’s natural response is anger. That anger does not stay with his father. It reverberates to the relationships with those around him and into his work. This leads to the assignment to write about Mister Rogers. It takes the gentle kindness and persistence of Fred Rogers to help Lloyd to come to terms with his father and his broken emotional past.

Though women directors are numerous in Hollywood, their profile is not as prevalent as male directors. As a result, their work is sometimes not given the spotlight it deserves. Among the 100 top-grossing films of 2018, only 4% of them were directed by female directors. If I was a Hollywood executive, I can imagine that those numbers come into play when hiring directors. Hollywood, like any business, relies on profit to keep going. If a director, regardless of sex, does not have a track record of financially successful films, it would make me think twice about hiring them.

Marielle Heller (who directed one of my favorite films from last year, Can You Ever Forgive Me?) directed A Beautiful Day in the Neighborhood with an assured, tender hand. The finished product speaks for itself. It does not matter the labels that they use to define themselves or the labels that others use. It only matters that they have the ability to direct, the want to succeed, and the drive to create a film that is both entertaining and brings in profit for the studio.

If nothing else, this film proves once again that a female director can be the driving force because a film that is critically and financially successful…and also can add a completely different perspective to beloved figures. As I see it, it comes down to the opportunities that women are given. I would hope that, in the future, when directors are hired for highly anticipated projects, another female director is given an opportunity because of Marielle Heller and A Beautiful Day in the Neighborhood.

If I was to compile a list of the top then films of 2019, A Beautiful Day in the Neighborhood would be on the list. At its heart, it is more than a biopic of Mister Rogers. It is the story of a man who learns to forgive his father, move on from the past and become a better person, which feels so much more honest than the standard biopics that we see.

Thank you for reading! What are your thoughts on A Beautiful Day in the Neighborhood? Comment down below!

I already wanted to see this, and now I want to see it even more. I grew up watching Mr. Rogers, and Tom Hanks – and honestly, I can’t think of anyone that I think could play him better.
I’m going to go see it this weekend!