You’ve Already Forgotten about ‘Like a Boss’, Haven’t You? 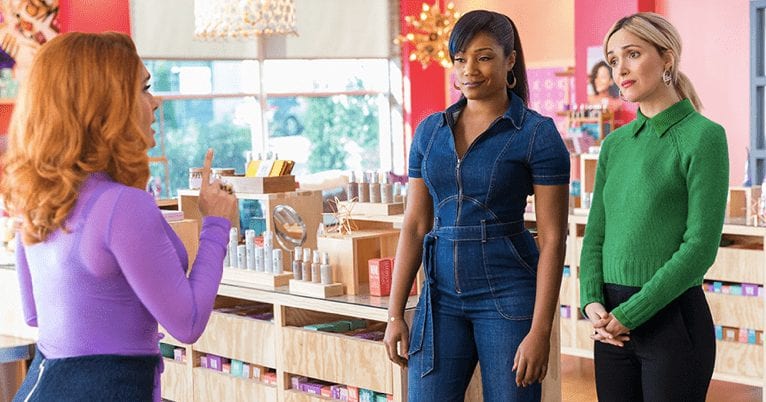 Ah, January, a time when every critic wonders why they even bother. I often think that studios think something similar as they release bottom-of-the-barrel material with a lazy shrug that says, “well, at least we can use it as a tax write-off if it bombs!” You can always find a few genre gems in the early part of the year, but ultimately, you’re more likely to find some major stinkers. (I’m mentally preparing to watch The Murder of Nicole Brown Simpson, from the same director as my favorite film of 2019, The Haunting of Sharon Tate.) Even more so is the amount of movies that are entirely non-starters, the kinds that are so low-res that it isn’t worth getting heated over them. That’s where Like a Boss comes into the picture. A comedy that is as perceptive as someone throwing their hands in the air and spouting, “Women in business? Wow! Who would have thunk it?”

In a story that feels like it was pulled straight out of 2003, two long-time friends, Mia and Mel (Tiffany Haddish and Rose Byrne), are co-owners of a cosmetics store also named Mia & Mel. They live under the same roof together, without significant others, and are very content with their life choices as women in business. Mia is the creative force between the two, who enjoys partying, smoking, and the like; whereas Mel is the business savvy one, working more behind the scenes to keep things up and running. But as we come to learn, Mia & Mel isn’t exactly a profitable venture — Mel finally admits to Mia that they are approximately $493,000 in debt, barely keeping above water. If things don’t turn around, they’ll most likely have to close in a few months.

Enter Claire Luna (Salma Hayek), CEO of Oviedo, a fictional cosmetics company that is analogous to L’Oreal. She offers to pay off their debt and purchase 49% of the company, with the stipulation that she gets total control if Mia and Mel can’t work with each any longer due to arguing and fighting. Thus begins a lot of lowbrow cattiness as Luna attempts to steal their company by pitting them against each other in comedic(?) set pieces. Any inkling of commentary on female friendship that you may take away from reading that synopsis is sadly underdeveloped.

Granted, one fairly amusing wrinkle is that the duo quickly kicks gentlemen callers out of their house or establishes that nothing but sex will occur. There is never a threat of a romantic partner for either of these two, only time for work and friends. Though that’s where the possibly thoughtful ideas stop, and the unfunny improvisation begins.

It’s strange, one would think that Like a Boss would at least have something on its mind, even if not particularly subtle. But the entire film is so…limp. Then, after some extensive, highly complicated research on IMDb, the reason became clear: Like a Boss is directed by a man and written by two other men. That’s not meant to besmirch director Miguel Arteta or writers Sam Pitman and Adam Cole-Kelly or to suggest that a man can’t write or direct a woman with aplomb; however, the lack of any female involvement in the creation of this movie other than Danielle Sanchez-Witzel’s “story by” credit is an inherent disservice to this material considering that its main cast is all women and the movie deals with mostly feminine issues.

Is there a universe where Like a Boss was ever going to become the first comedy classic of the 2020s if it would have added a single female writer? Probably not. There are far too many issues with Like a Boss for that to save it entirely. But it probably would have helped! Or at least given some kind of perspective that makes the jokes land. Not everyone is Bo Burnham, whose work in capturing an honest portrayal of a teenage girl in Eighth Grade is still astonishing. As is, Like a Boss is hopelessly base.

The movie’s understanding of women is as nuanced as the gaudy, sparkly pink logo that has been used in the film’s marketing. What has been billed as a movie for a girls’ night out is mostly gendered pandering, filled with tons of makeup and insufferably shallow messages of body positivity and friendship that the movie hopes distracts you from its other flaws. Salma Hayek’s Claire Luna is an equally regressive item in the film, mostly because she doesn’t do anything particularly interesting. A character who pits women against other women for reasons that we never understand. A tighter screenplay would understand how to piece together more commentary out of Claire Luna, who is practically begging for it with her overly stylized hair and makeup as well as her heightened ego.

Notice how I haven’t focused on the film’s humor thus far. That’s because it’s essentially non-existent, or is comfortable going for the easiest jokes possible. Rose Byrne, Tiffany Haddish, and Salma Hayek are all funny actresses, but not when they are improvising almost all of their lines. You can tell by focusing on the film’s editing as it cuts awkwardly around rambling conversations that don’t have the necessary comedic timing to function. Like a Boss is also the kind of rigid comedy where you know that a few side characters only exist to butt into a conversation with an outlandish non-sequitur to keep the jokes coming at a furious pace. Billy Porter, Jennifer Coolidge, and Karan Soni inhabit these characters, as they jump into the frame, say a few lines, and then quickly retreat from the frame. Not only is it robotic, but it’s also very forced.

At 83 minutes in length, it’s difficult to lambast Like a Boss entirely. It never threatens to overstay its welcome like some of the recent reprehensible comedies with stretched runtimes. The subject material is also never aggressively bad nor unbearably crass. Like a Boss fits into an imperfect space of subpar mediocrity, a place that harbors objectively bad movies that will never compete with the all-timers like Jack and Jill or the recent Cats nor be remembered a few months after its release. Move over, The Intruder, Gemini Man, and many, many others, you have brand new company in the Land of Misfit, Forgotten Movies.

[…] it is just much too lengthy for general audiences to enjoy. In fact, Meet Joe Black seems to have dropped off film radar altogether nowadays (except for that glorious scene of Brad Pitt being hit by a car). I will say […]

Saturday night live has so much to answer for. Improv sucks. It always sucks. Because it’s expected to suck, when it even approaches half decent it gets given passes left and right and we get stuff like this or Will Ferrell’s bottom 30% of movies as a result.

So true — I detest comedies that merely point the camera at talented people and are like “just be funny!” It also feels like a wave of bad copycats after Apatow and co. were so good at it almost a decade ago